A romantic comedy visual novel centered around a girl named Mika Anderson, who gets entangled in the affairs of incubi.

A guide on getting a romance with Diana! Spoilers ahead!

Some Info and a Spoiler Warning

Hello everyone, this is going to be my first guide for Seduce Me The Otome! As much as i love this game though, keeping track of your progress is a bit difficult without steam achievements*.

*Edit: Achievements were patched into the game, so if you get the Diana ending, you’ll get the ‘My Adventure’ achievement. In-game however, the only way to keep track of your progress with each route is to go to the main menu and click extras. From there go to the gallery and select a character. You can see your progress with them based on how many images you’ve unlocked. You won’t get the achievement unless you see the full Diana route.

For this guide, we’ll be romancing Diana, a mysterious succubus who seems obsessed with bringing your demon friends back to their world!

AND BE WARNED, THIS IS ONE OF THE ENDINGS, SO BE WARY OF UNMARKED SPOILERS!

There are a few ways to get Diana in this scenerio.

2. You can avoid pursuing any of the demons at all and hang out with Naomi and Suzu on the day of the houseparty and not bond with or try to find any of the incubi the following day.

3. You explore the house on Sunday (the day after the party) and try and find out more about what you found in grandpa’s study, resulting in you learning demon magic of your own.

and 4 and perhaps most importantly: When Malix captures you, you either fight him on your own OR summon the demon whose true name you learned. You’ll also have to tell the boys to leave the mansion…

The next morning after the boys leave, Diana will wake you up abruptly and say she’s there to steal your memories because humans can’t know about the existance of magical creatures. You’re given 4 choices: – Let her erase your memories – Summon the demon you got intimate with – Make a deal with her or – Fight.

1. If you try summoning the demon of your dreams however, the heroine won’t remember his name and won’t be able to remember him.

2. If you let her take your memories, our Heroine will forget the demons ever existed and you can pursue Naomi, Suzu or Andrew and have the heroine live a normal life.

3. If you fight, you’ll end up pit monster food, but you’ll get a new achievement for your troubles called ‘So long, Sweetie’

However, our heroine isn’t stupid and Diana isn’t completely heartless! So the obvious choice is to make a deal with her! After selecting ‘Make a Deal with Diana’, she’ll ask you what you want in exchange for letting her take your memories. The options you are then given are ‘Power’ and ‘Her’.

Selecting ‘Power’ will result in a different ending in which you become a demon queen yourself because you didn’t specify what sort of power you wanted. Either way, Diana got what she wanted… BUT don’t panic! Because this will get you the “My Kingdom” Achievement!

She’ll talk back a bit, but ultimately tell you more about the demon world before going off to bed. As part of the deal, she’ll stay with you for the day and tell you everything you want to know.

The Next Ciel Phantomhive

After you wake up the next morning, Diana will still be in your house as per your contract. Demons don’t go back on their word. She’ll have prepared you breakfast. After some more talk, the heroine will question if she ate anything and she’ll state that she’s already eaten. Probably annoyed by our nosy heroine, she’ll ask if you really want to know.

When given the option of whether you really want to know select ‘yes’.

Next she’ll offer you to let you eat food from the demon world called ‘The Sweet Flower’.

When given the option of whether to eat it or not select ‘yes’ again.

After they talk more she’ll point out that you two have a contract that can’t be broken. She has to stay with you in order for the deal not to be broken. As much as going to school means for our heroine, to continue this route you have to stay home.

So when prompted, select ‘I’ll stay’ to continue the route.

She’ll then try to tell you about how humans have weak minds and can be easily manipulated. To demonstrate this, she’ll take you to a random business office where she charms the pants off of the business men there. But as you watch her display, you’ll be given another prompt.

Select ‘That’s enough Diana’ to send the both of you home and to stop her merrymaking.

The talks you have with Diana after going home involve her explaining more about the worlds of humans, demons, angels, devils and even vampires… She also explains more about her kingdom and the arranged marriage. After sharing her story, you are given the option to hold her hand.

When prompted, select ‘Take her hand’

But out romance-seeking Heroine will get an oppertunity to say ‘You shouldn’t have to marry someone you don’t love’. Select that option when prompted.

Diana continues though, saying she’d rather be unhappy than see her kingdom destroyed by the Demon Lord and that she can’t truely be loved because people will only be extranced by her power. But our heroine has to be persistant!

When prompted, select ‘I’m not.’ and insist that you’re different from all the others!

And for once, we actually see a bit more of a human side to Diana. After our heroine teases her a bit, you’ll get a new screenshot for the gallery to mark your progress of Diana holding the Heroine close to her by the window. Keep in mind that since there are no Steam achievements for this game, this image will help you keep track of your progress should you make an error later on.

You should save at this point.

When morning comes around, Diana will insist that she needs to go to a certain place before your deal expires and she takes your memories. As per your contract, you can’t part without breaking the promise and having to surrender your memories to her. So she’ll take you along. You’ll both go to the cemetary where she ends up taking you to our Heroine’s beloved Grandfather’s grave…

She’ll explain everything related to her grandfather and once our heroine is told the entire story from Diana’s point of view, you’ll be given a choice of either attacking her or running away.

Attacking her will result in her and an angel having to attack you. Which will give you an alternate ending. You will however get a new achievement: ‘Pure. Innocent. Naive.’ as a result of this ending.

She’ll end up taking you home and deeply apologizing for what happened as she wasn’t aware of the heroine’s connection to the man she visited in the cemetary. She and the heroine will have a big heart to hearat about the situation, but Diana will ruin the moment, stating she needs to take her memories.

You’ll be given the option to surrender your memories or ask her to keep them.

Our heroine will point out that Diana can’t take her memories away from her now because Diana has already taken away her grandfather (even if by accident) and blames Diana for being in the mess she is in now, which Diana will let slide. Taking pity on our heroine, Diana lets her keep her memories. 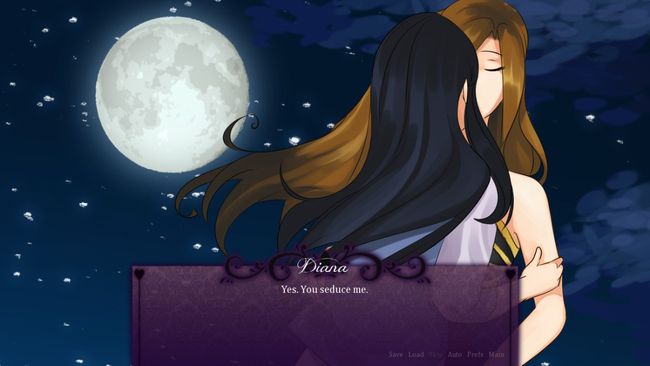 The resulting ending will give you this picture and both the heroine and Diana can stay together and love each other for as long as possible while fighting against the rest of the demon world. After the credits (whether you watch the credits or click past them), you’ll get the ‘My Adventure’ achievement to display in your achievement showcase!