My step by step Replay Editor tutorial. When you’re playing Session, you’ll be doing lots of lines and epic tricks. You might wonder if it’s possible to record them and luckily the game already includes a proper replay system. This guide will help you nail your first real clip.

Welcome to my step by step Replay editor tutorial. Do note this is made in the early access build. So things might be buggy or unpolished. When you’re playing Session, you’ll be doing lots of lines and epic tricks. You might wonder if it’s possible to record them and luckily the game already includes a proper replay system. This guide will help you nail your first real clip. 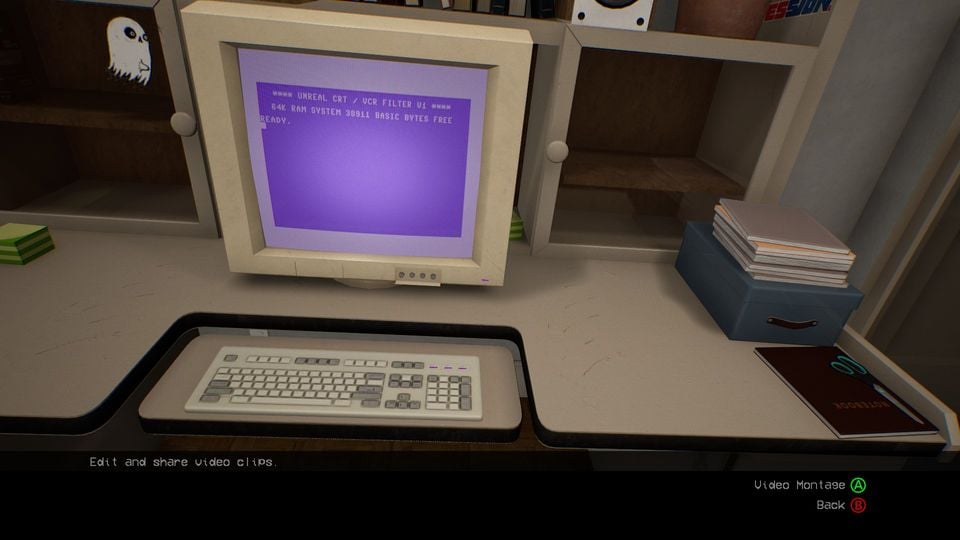 BASICS 101 – How to get into the Replay Editor

So say you had a sweet ride full of tricks that you want to save.
You press the “start(Options)” button on your controller and select “Replay & Editors”.
Here you can either go directly to the editor, save your replay or save the montage. You can also enter your apartment and open a saved replay or montage there to edit. 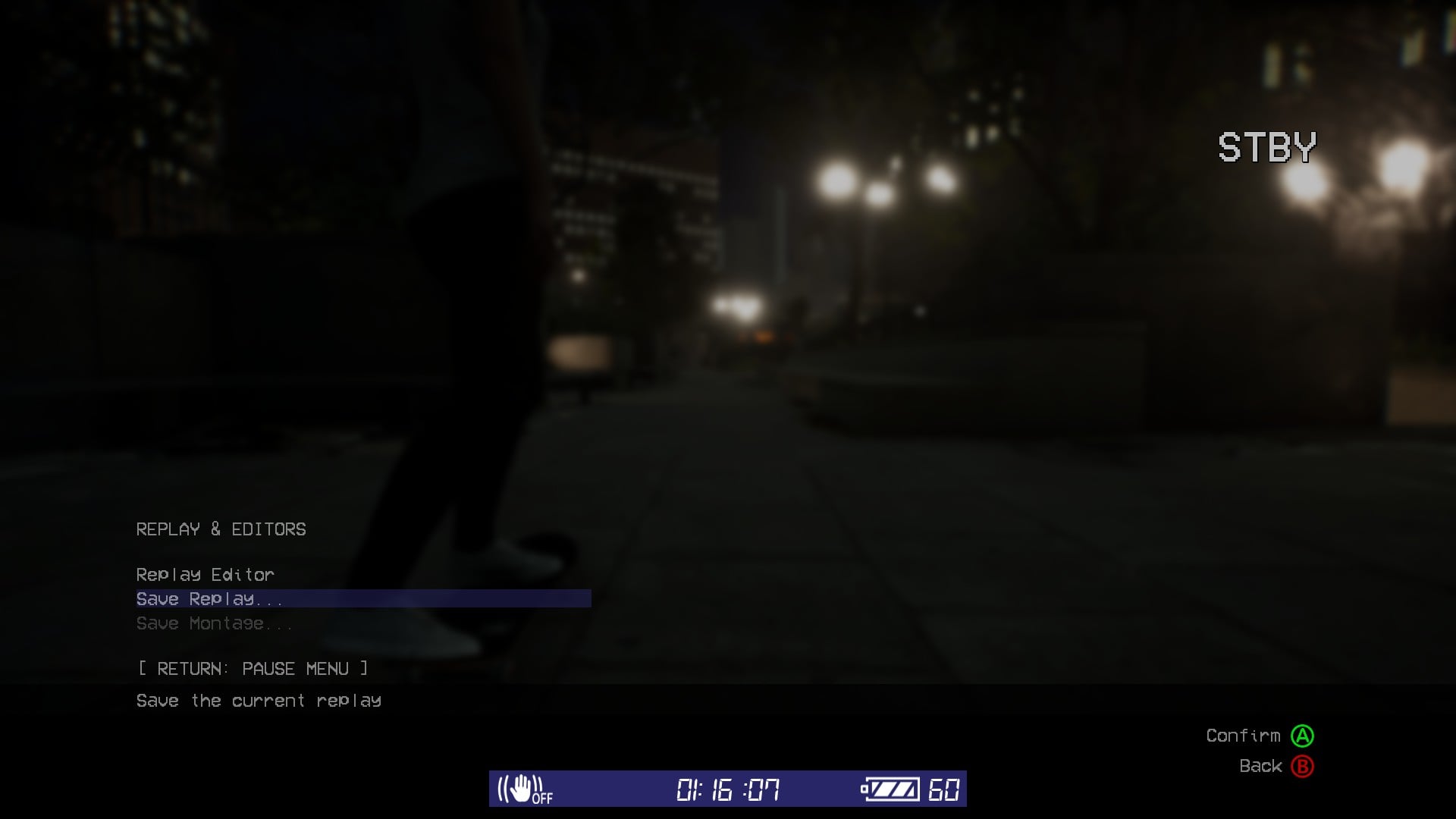 The replay is your entire playthrough recorded. A montage is a clip you’ve selected inside the replay. Once you’ve opened a replay you’ll be greeted by a lot of controls on the bottom, a timeline on the top. 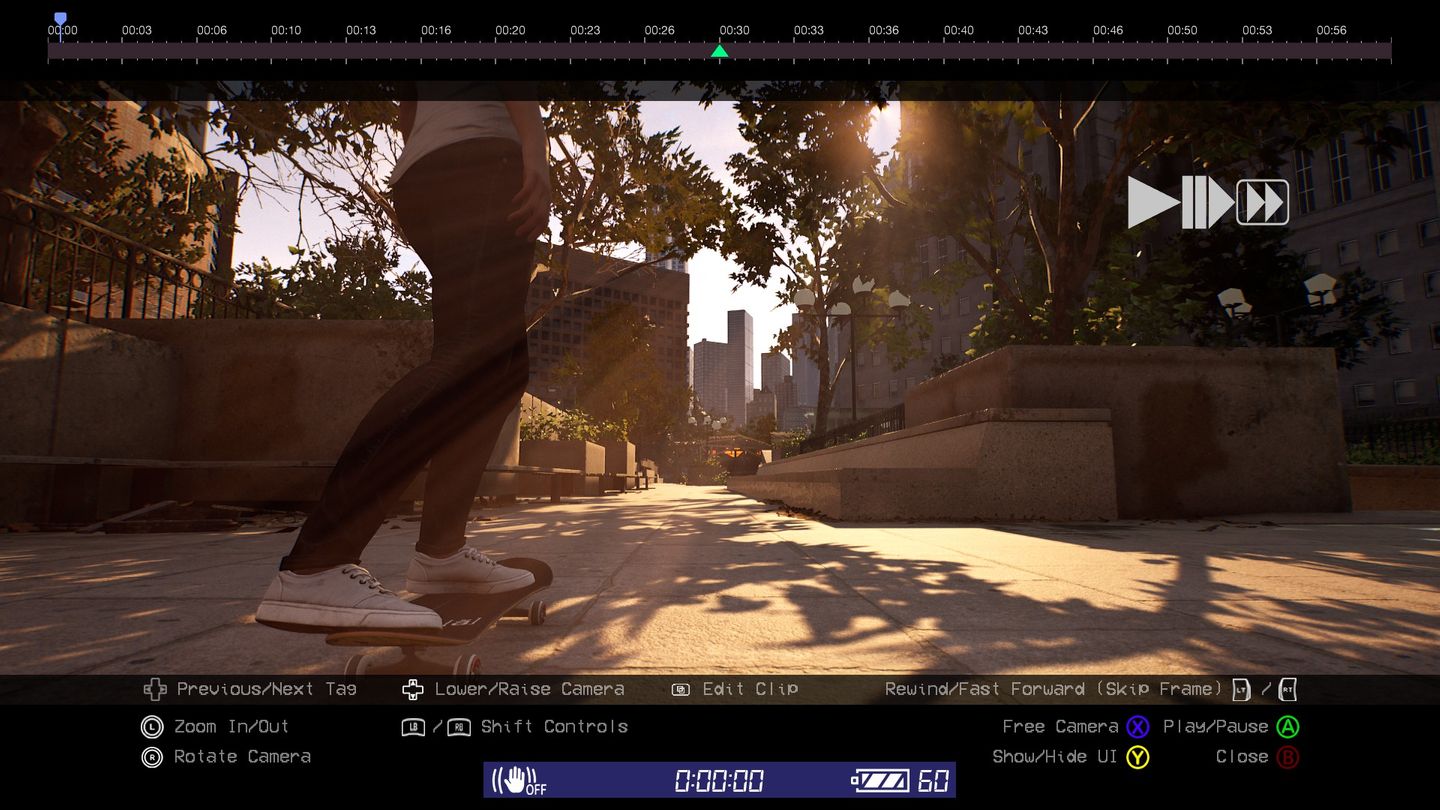 There are three sorts of cameras you’ll work with, the Free camera, the Orbit Camera and the Follow Camera.

The Follow Camera is the camera you also see while playing the game. It’s close to the ground and near your feet and board. You can’t really rotate or zoom this camera. 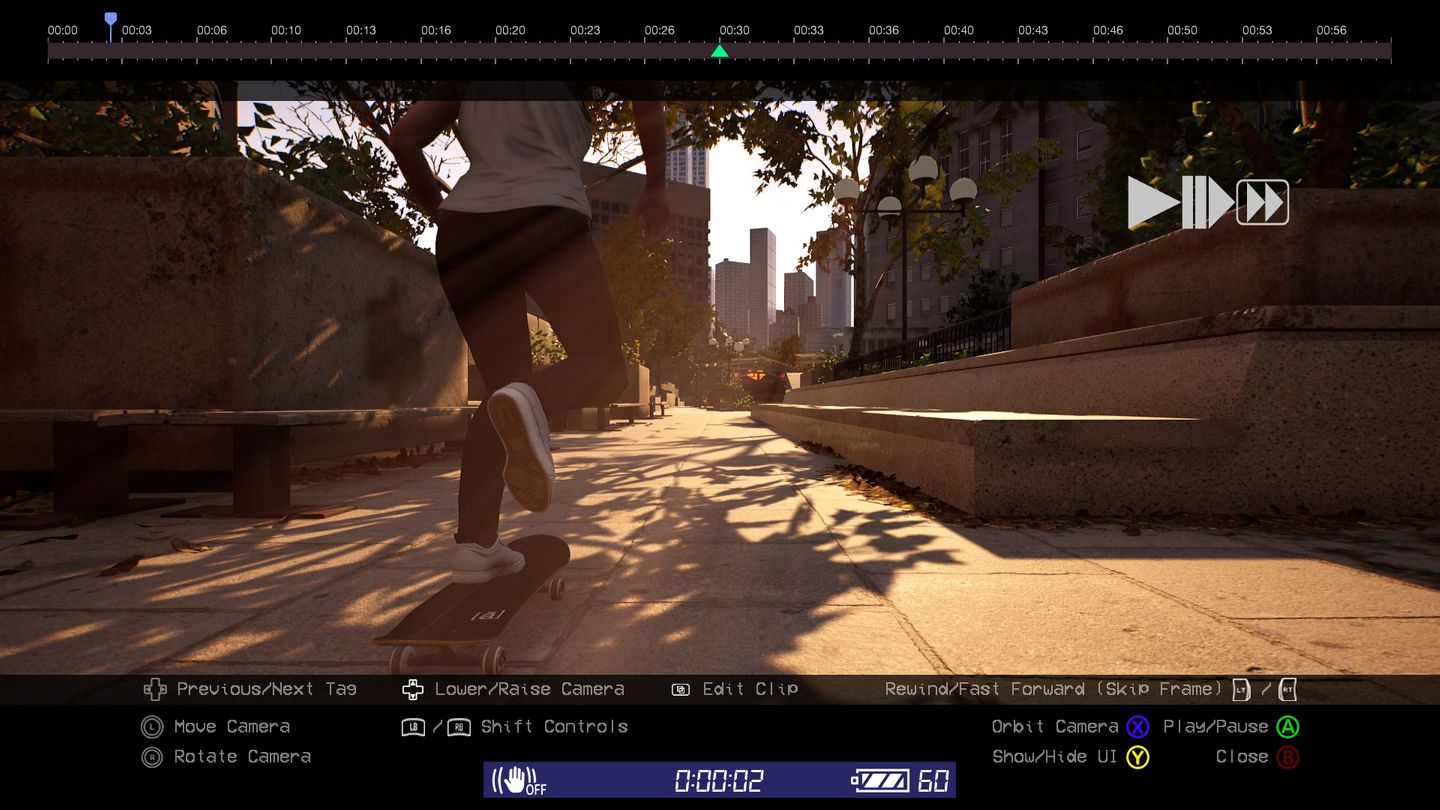 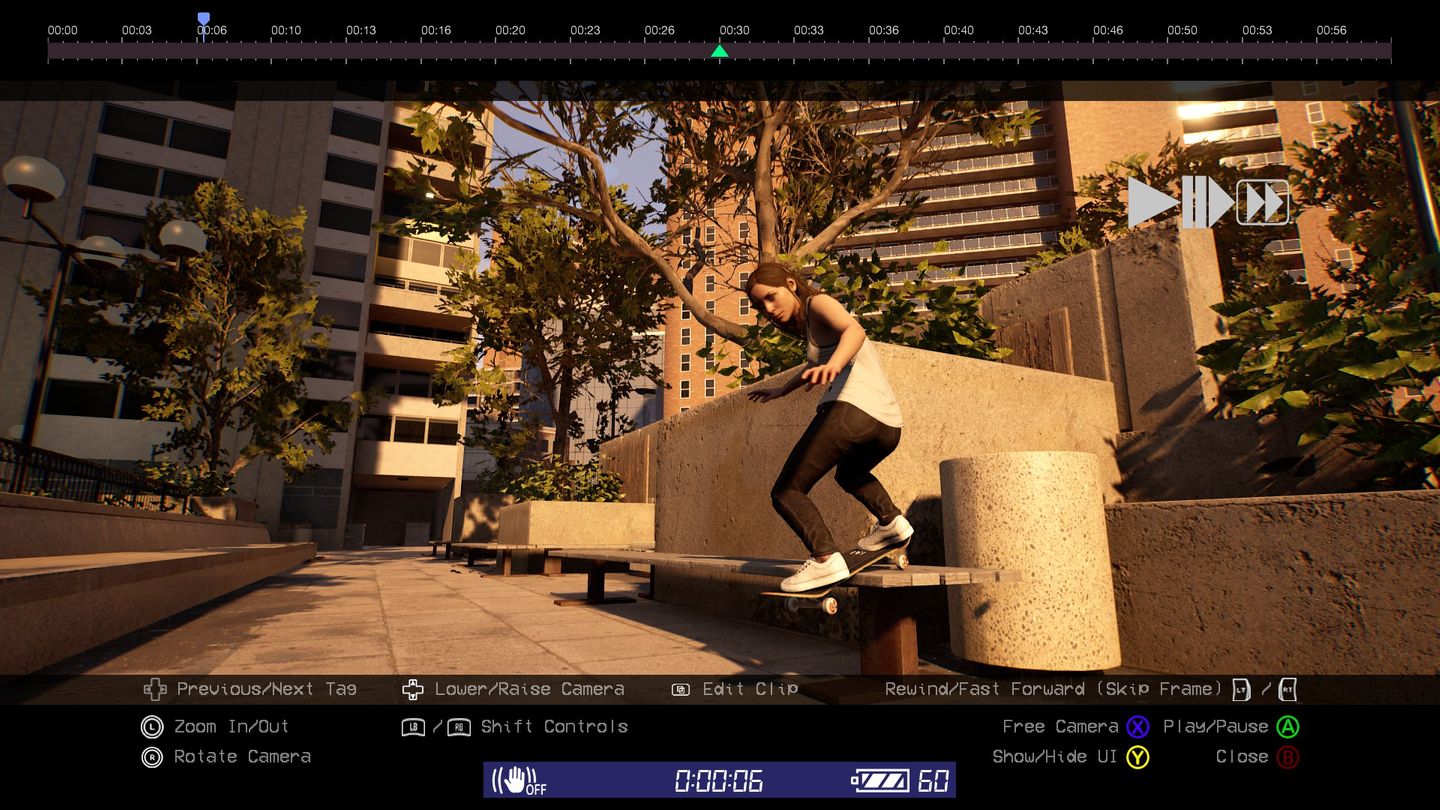 The Free Camera is a camera that doesn’t follow the character around. You can rotate and zoom in and out on its own and place it somewhere and it acts more like a stationary camera. It seems to be tethered to a certain max distance from your character though. 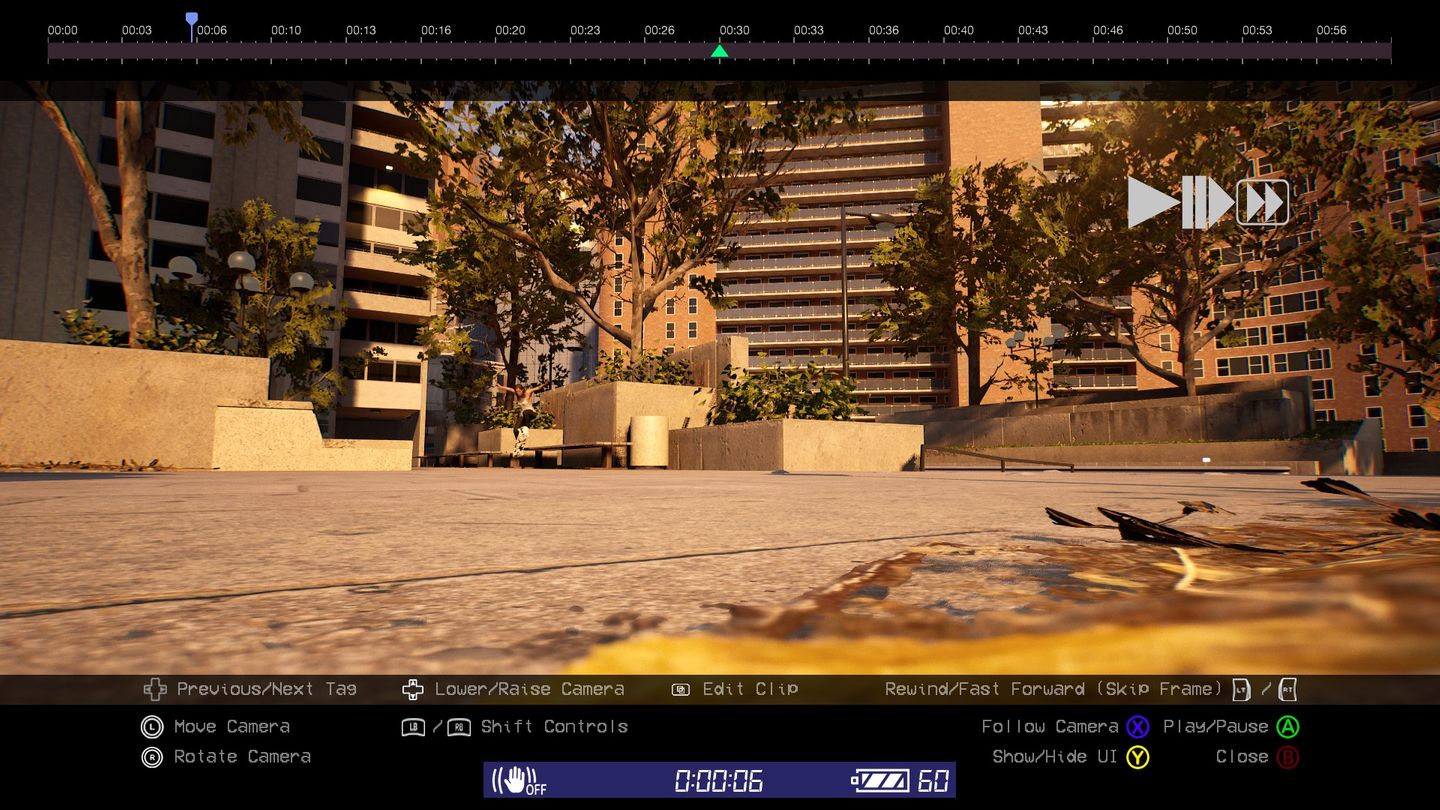 Tags are like bookmarks for your timeline. If you see a scene you like, you can tag it and that will make it easier to quickly switch between certain scenes, even if they’re minutes apart.

Either way, Once you’ve found a great potential clip in your timeline, it’s time to press the “Edit Clip” Button.

You should now see a red dot with REC on the left side of your screen. This indicates that you now ready to edit your first clip! The majority of controls should be similar to when you were scrubbing the timeline, but a few got changed. 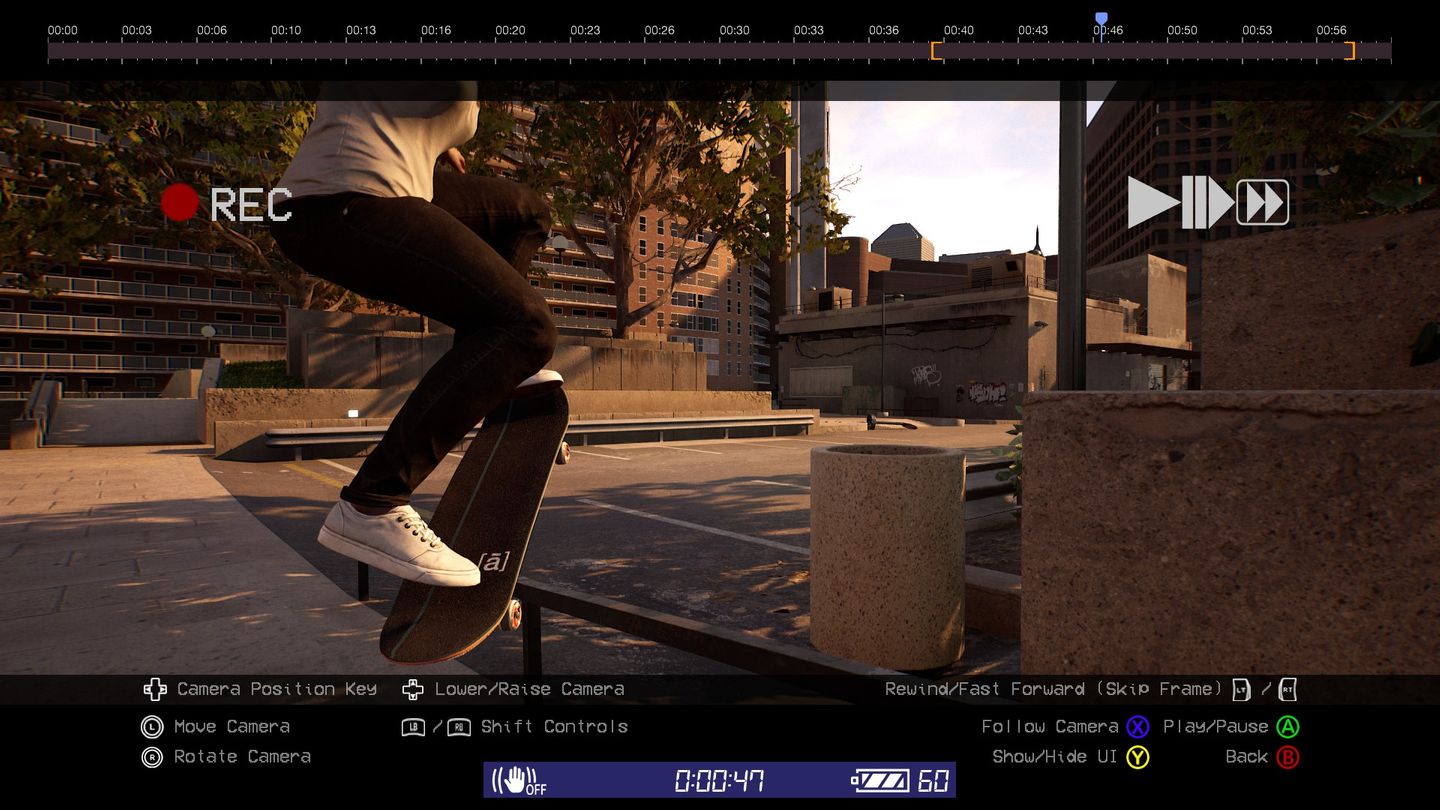 Y (Triangle on PS4): Show/Hide UI
X (Square on PS4): Change camera
B (Circle on PS4): Back to the timeline scrub menu
A (X on PS4): Play the replay/Pause the replay

This is mostly just to save it as a montage. You’ll be able to see the length of the clip on your timeline through the use of white and orange brackets. Once you saved a montage, you can go to your appartment and open it there. The timeline will only include the clip length you had saved instead of the entire replay you were editing at that moment.

You can also Hold RB and press the “Video Zoom In/Out” Button to make the timeline only show the duration of the clip.

Keys are where you’ll save the camera during a scene. When you key a camera it matters where it’s located and what setting the “Change camera” mode it is on. When you start scrubbing through the clip’s timeline, it will remain there for the entire duration until you set a new Camera Position key further down the line.

It’s good practice to set one at the start and then work your way forward. Plan your keys ahead of time, so you won’t have to cycle too much between them and get confused. If it does get too confusing, you can always just cycle through the keys, delete them one by one and start over. Sometimes it’s better to start from scratch than to try to save a messy clip.

Setting the camera positions is done by selecting the Camera Position Key with “Cycle between Keying options” buttons, then holding RB and then press the “Add/Edit Key” to place the Key. This also allows you get choose to Interpolate. Enabling this means that the camera will smoothly move to the next Keyed camera with a transition.

Either way, Press A to add the key. You should now have placed down your first real camera key. Whenever you want to change the camera’s properties or location, make sure to hold RB first and cycle to the original Key. Then you can change its location or whatever, hold RB again and use the “Add/Edit Key” button. To delete a key you can do the same, Hold RB and use the “remove key” button.

Camera Position Key
The “Change Camera” setting, where you placed the camera, whether it’s zoomed out/in is all saved when you key these properties. 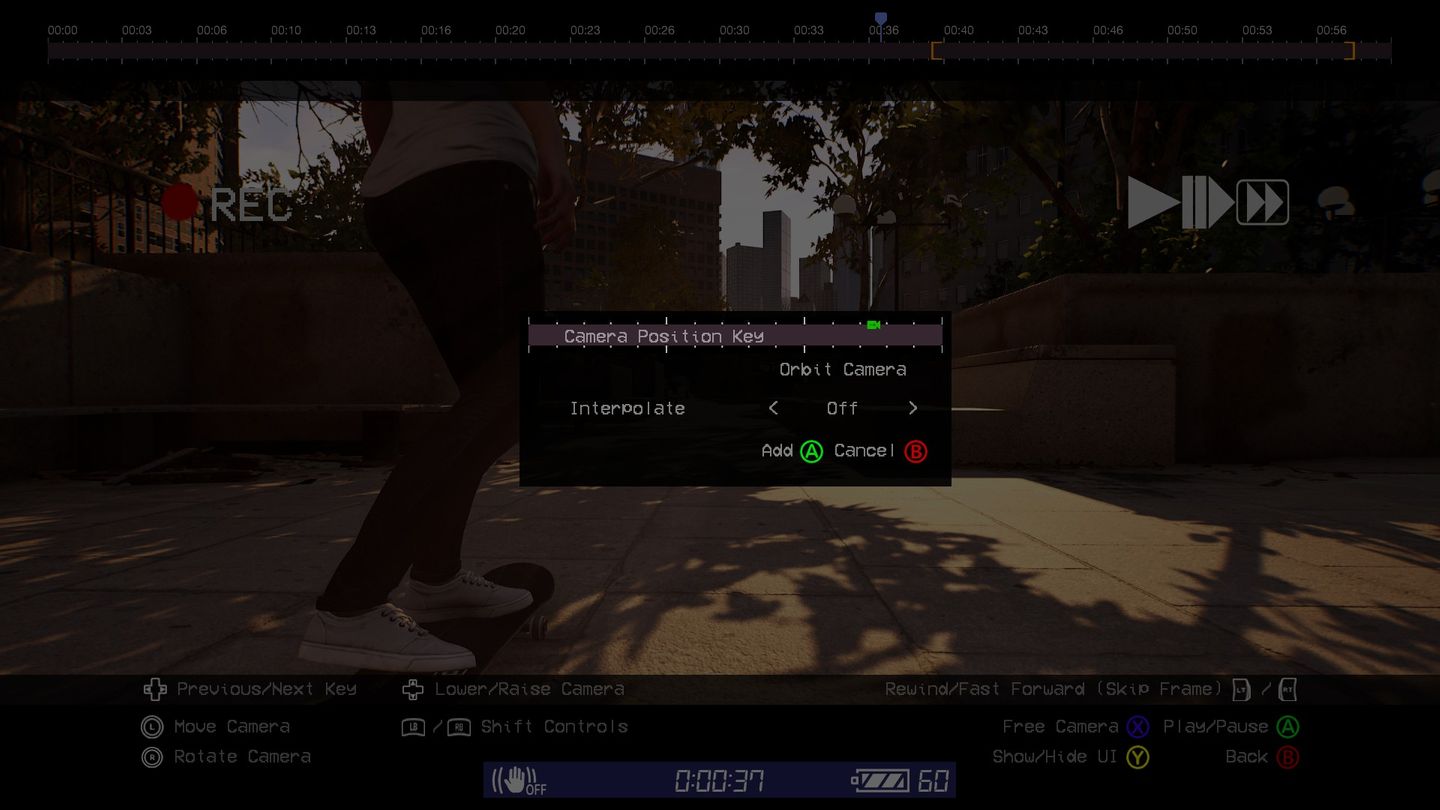 Play Back Speed Key
When you key this, it allows you to change the playback speed of the scene. 1.00 is playing the clip on normal speed, 0.50 is playing it in slow-motion while 1.50 is speeding up the clip. 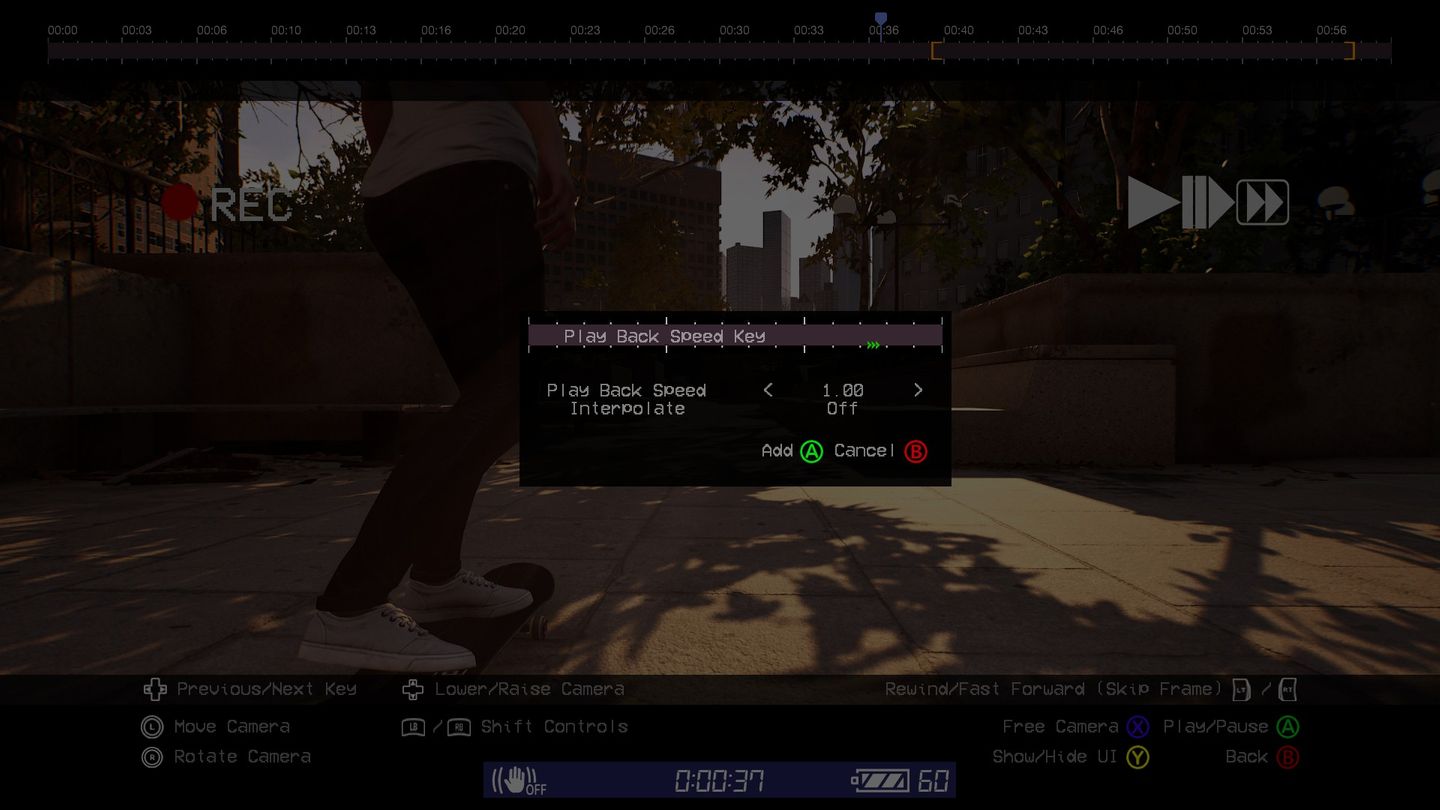 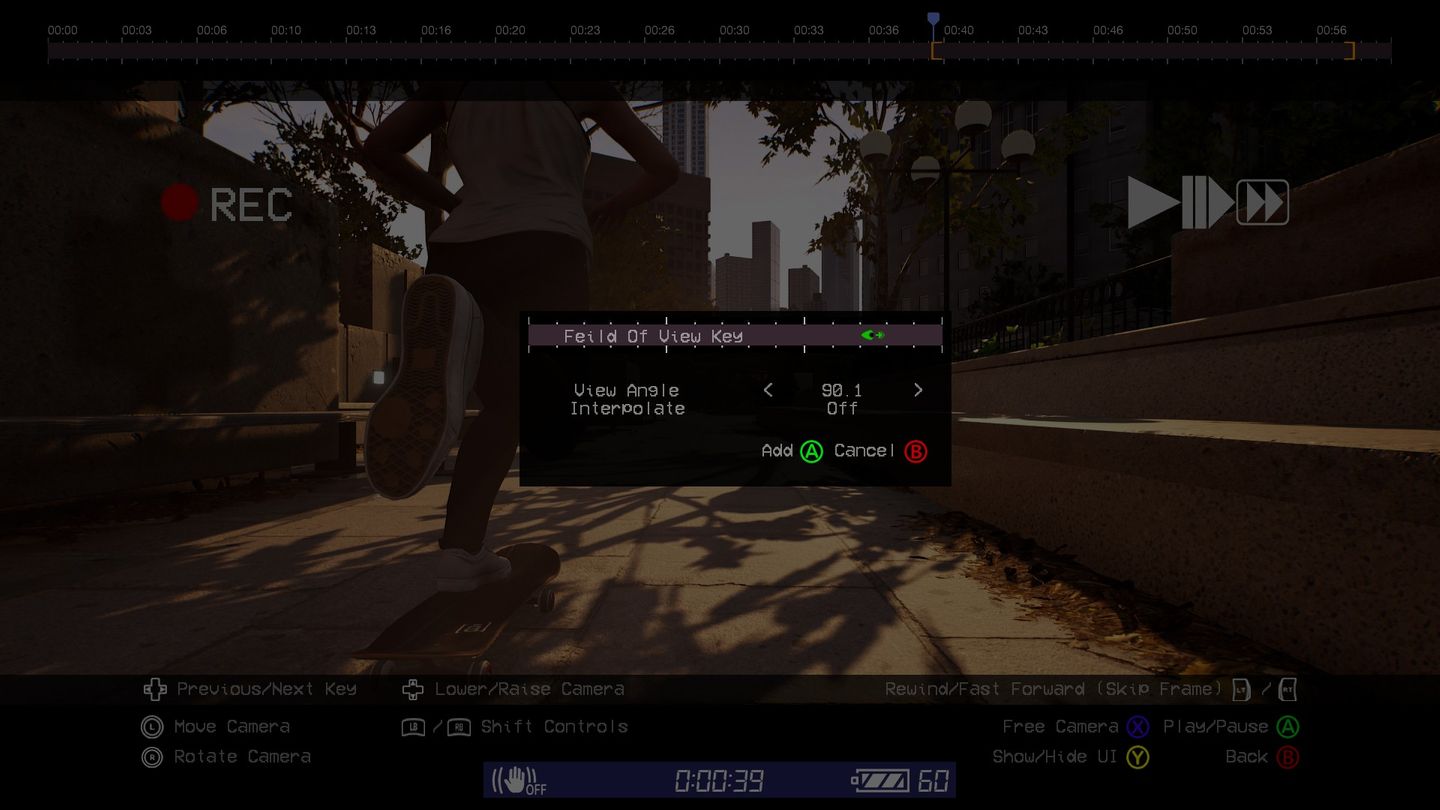 Start using the combination of these keys to set up your own clip.

Once you’re done, you probably want to show the world your new clip. You can save the montages and clips, but I’m not sure how to bring them on the screen in the appartment or out of the game normally.(If this gets improved, this section will probably get revamped)

Instead I usually just hide the HUD, mute the music in the audio settings and record my clips with something like Nvidia Shadow play or OBS. Find recording software you like and prefer. After that you can either continue editing it a program like After Effects or Premiere, put a cool beat underneath it and show it to the world! 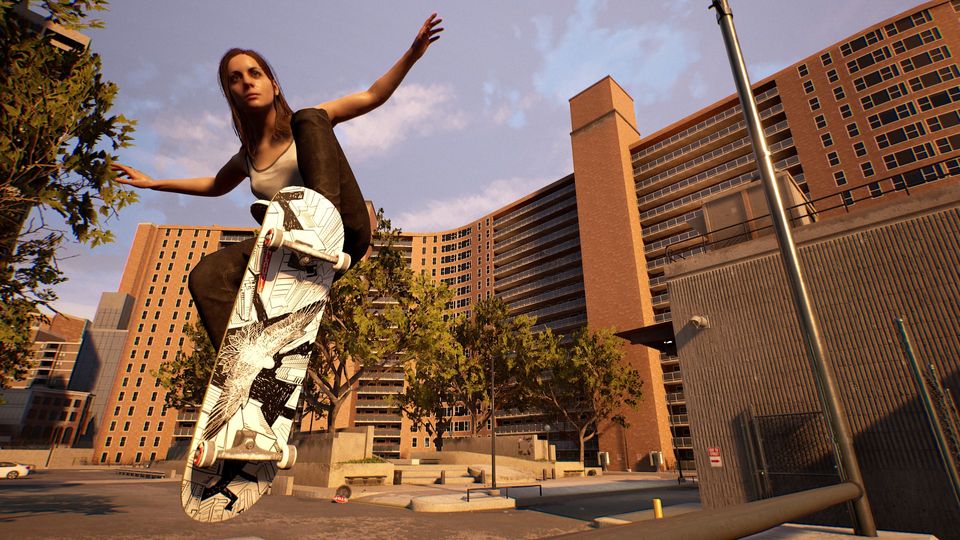 While I mostly went over the basics, there are a few tricks to make your videos look a bit lot better. I’ll fill this section up over time with more ideas/suggestions and stuff if I get more frequently asked questions and stuff.

Interpolate cuts
The moment you say a key should interpolate you’ll might notice that your static key before it gets altered as well. Sometimes with results less than ideal. Your epic static shot might be looking away the moment trick is supposed to be in view. To remedy this I recommend turning off interpolate and go back to the static key you want to keep. Let the scene run out until you feel you’ve seen enough and place another key there that’s identical to the key that started the scene. Now go back to your interpolated key and turn that function back on. Now you’ll see that the static camera shot will stay until it reaches the end key, where it then will interpolate to the interpolated key. Do keep in mind that the length/speed of the interpolation is based on how many frames/time is left between the Keys.

Keep your camera moving
Static camera shots can be nice, but having a bit of movement makes it feel more dynamic. Add in extra keys at the start or the end that only slightly move the camera left/right/up/down (depends on your preference for the shot), so the camera never gets set into a static camera viewpoint.

Remember you can change Day to Night
Just because you filmed it at day, doesn’t mean your clip has to be recorded at day. you can still change the day and night time in the settings to create your own desired mood piece.