The purpose of this guide is to show you how combat is calculated in Shadow Empires, which will help make you a better commander. It does not cover tactics, this guide is about mechanics.

A “unit” is a full counter of troops, eg 10 Rifle Militia. A “subunit” is a single element in that counter, eg 1 Rifle Militia. Combat is resolved subunit vs subunit, decided by comparing random numbers generated from the subunit’s combat statistics.

“Soft” is a subunit that a) is often infantry and b) often has its move listed as “foot” and
c) often represents 100x or more elements per subunit on the strategic map. 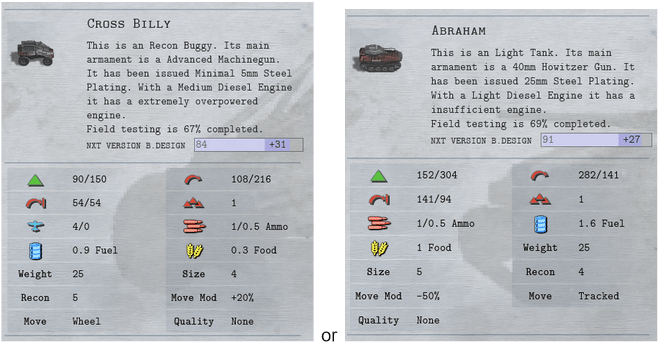 “Hard” is a subunit that a) is often a vehicle and b) often has its move listed as “wheel” or “tracked” or “walker” and c) often represents 10x or fewer elements per subunit on the strategic map . There are exceptions to this such as “chitinous” aliens, which are Hard but move on foot.

Attack or Defense does not change during tactical combat, it is based on which side started combat from the strategic map. Soft or Hard varies per target in tactical combat.

Hitpoints is a range of random numbers that is compared to the Attack or Defense check. Hitpoints are not the same as traditional role-playing game hitpoints, they are not a pool that gets depleted over time. Note that some Hard vehicles with armor have Hitpoints vs infantry attacks (aka Soft) and also have different Hitpoints vs “non-infantry” attacks (aka Hard). 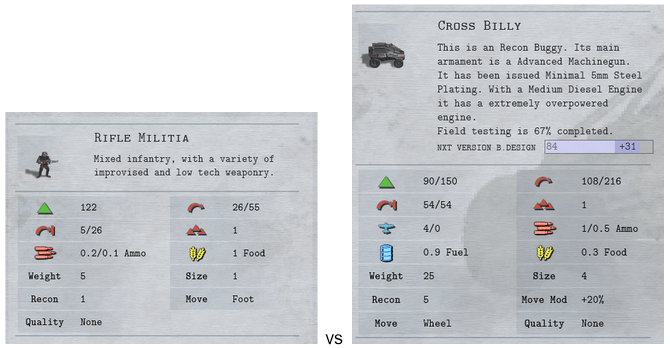 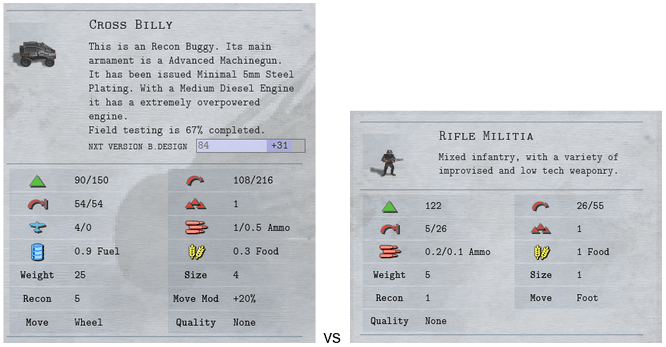 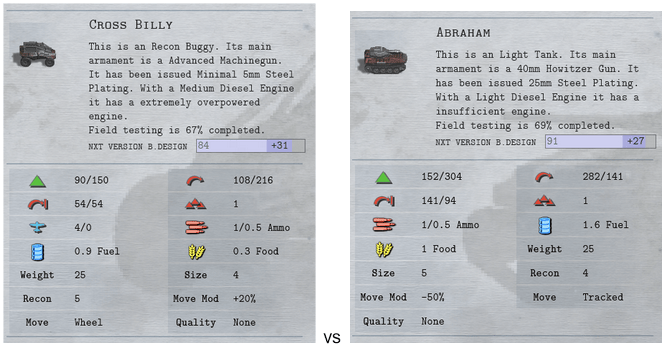 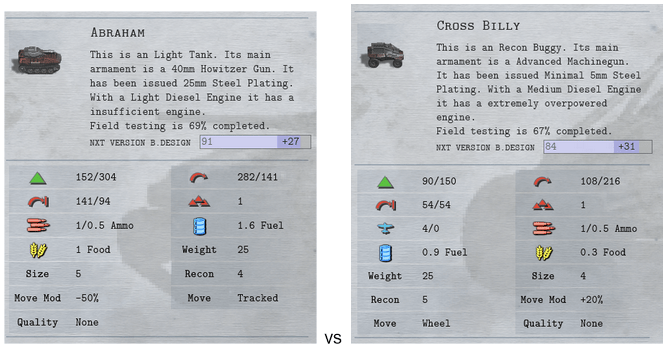 A view of those same combat statistics in a table

There are a number of “static modifiers” in the Attack Scores section on pg 328. For example:

“Conventional weapons and Howitzer Guns have -50% Hard Attack and Hard Defense”
“Any vehicles (track/wheel) with Guns get their Hard Defense value diminished by one third.“
etc

These static modifiers have already been taken into account for the subunit Soft / Hard Attack / Defense scores. For example, the Howitzer guns on the Tank have Hard Attack initial scores of 282 which have been modified by -50% for the final listed score of 141.

In addition to these static modifiers, there are a number of variable modifiers that change depending on the situation, many of them listed on pg 298 of the manual, including:

These variable modifiers are too complex for this simple guide, but let’s look at one example.

Here is the full exchange of four attacks, using these combat statistics

Each attack happens in sequence, so if a subunit is hit then the attacks do not continue.

Remember, these attacks would be modified by any other applicable static or variable modifiers.

Click the Detail button in the combat results window for the most specific info per fight. For example, when a Light Tank (Abraham) with a Soft Attack of 282 starts combat against Rifle Militia with 122 Hitpoints, we expect to see a roll of [0 to 282] vs [0 to 122] (231% chance). In the combat details we can verify this:

The text is small, but the red highlights show “Abraham(3) attacks ==> Rifle Militia(21)” and “attack = 282 VS defense = 122”. That is the expected combat check. Note many variable modifiers are applied during tactical combat, for example the final statistics are 258.4 vs 155.

And big thanks to Vic for making the game!