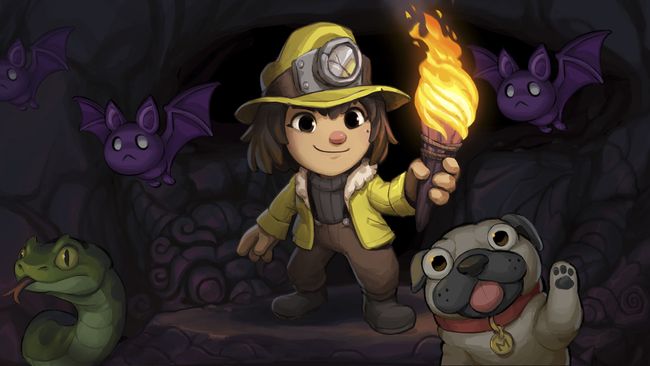 This pretty, purple-bricked biome is the last in the “easy” route of the game. Making it through and defeating Tiamat in 6-4 gets you to the credits and gets you credit for completing the game. Neo Babylon is not an extremely difficult world, but is highly volatile. UFOs can trigger a chain of effects that can blow up a ghost pot. Elevators that populate the level can crush one as well, and if you are on it you will go kaboom. The traps here will blow up your powerpack, jetpack, and hoverpack, resulting in tons of damage.

6-2: Ushabti Chamber and Entrance to the Sunken City (World 7)
A small doorway on 6-2 leads to a room filled with little statues called ushabtis. Every ushabti is different, and only one will do anything when taken to the next level. To determine which one, you need a Tablet of Destiny, obtained from the bosses in either Abzu or Duat. If you have it, check your journal for a hint at the correct ushabti. Here’s a chart showing what each Tablet description points to:

If you pick the right one and exit the level with it, you will enter 6-3 riding a mount that is unobtainable on the wild. This mount is called a qilin, and flies like a jetpack but without cease. Taking the Qilin to the final boss chamber in 6-4 can get you to the secret seventh world, the Sunken City. You fly above Tiamat, up, up, and up some more.

6-3: Madame Tusk’s Palace of Pleasure
On 6-3, a conspicuous door (there’s a neon sign) with a bouncer out front will appear. If you rolled a 7 seven times in Madame Tusk’s dice game in world 4, you will be on the guest list. Otherwise, you won’t be invited in. If you choose to go in anyway, prepare for many bouncers to try and murder you. Getting in with an invite is an achievement. If you don’t have a weapon by this point, consider dropping a bomb into the alcove with the bouncer. It won’t always kill him, but if you stay on top of Madame Tusk’s, the bouncer will usually run wild all over the level and get killed by traps, leaving you the shotgun. In the palace, there is food (HP ups) and a golden idol. There’s also an altar in the basement, and energy walls protecting quite a bit of cash. Here’s a YouTube video of a player getting invited in:

6-4: Tiamat
The “easy” route’s final boss, Tiamat, is in 6-4. Tiamat shoots red energy orbs that damage you, or if they hit a block, they become a random enemy from prior worlds. Bubbles rise up from the water providing places to stand. Hit Tiamat in the head enough times with a weapon and she’ll go down. I’m unsure if this is doable without a weapon, as bombs with paste seem to be reflected by her.