In this guide, I will explain the most effective way to farm pickles at Bar from a Bandits’s perspective. For reference, I’ve amassed over 1000 pickles in less than 5 hours of farming. Some of you might not like this method as it involves playing a pacifist role rather than a PVP-focused role. I will go into details regarding this later. Sorry for the formatting this is my first guide. You will die using this method, but the main point is to minimize rubles lost. Each run can cost as little as 664 rubles.

So first off is the loadout that you will bring. What I’ve found most effective is an assault rifle or smg, 120 rounds of expanding ammo (for the primary of your choice), a pistol, 60 rounds of 9mm expanding with one mag loaded already, 2-4 personal first-aid kits, PVP armor (striker and up due to radiation), and bags of 9mm ex and personal first-aid kit bags. Optional items:any plates (id suggest using partially broken plates, pick one up from Bar and only keep ones that have 30% or more), a primary weapon (incases you need to hot extract, which isn’t recommended), Flashbangs (this is used to get out of a sticky situation while not being overly aggressive)

Now lets talk about saving a pack at the vendor so you can get out there faster. If you know how to do this you can skip to the bold parts. So go to the vendor and click manage packs in the bottom 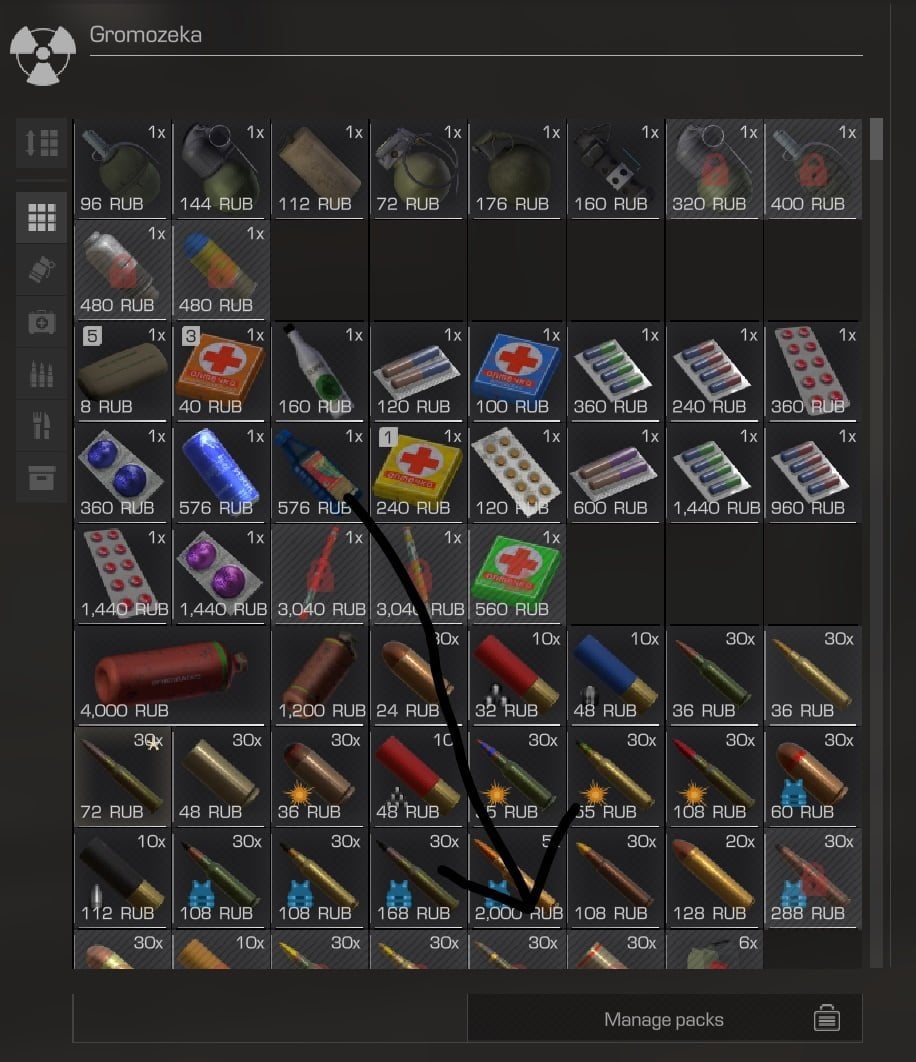 Now add 2 to 4 personal first-aid kits, 120 expanding ammo for your primary, and 60 9mm expanding. Now save it with a name of “Pickle Farm”.

Once you’ve done that exit the shop menu and press “T” (the default key) and you can quick buy this kit to get to the pickle farm faster.

Here is an example of the kit that I bring with me (if I was running bandits): 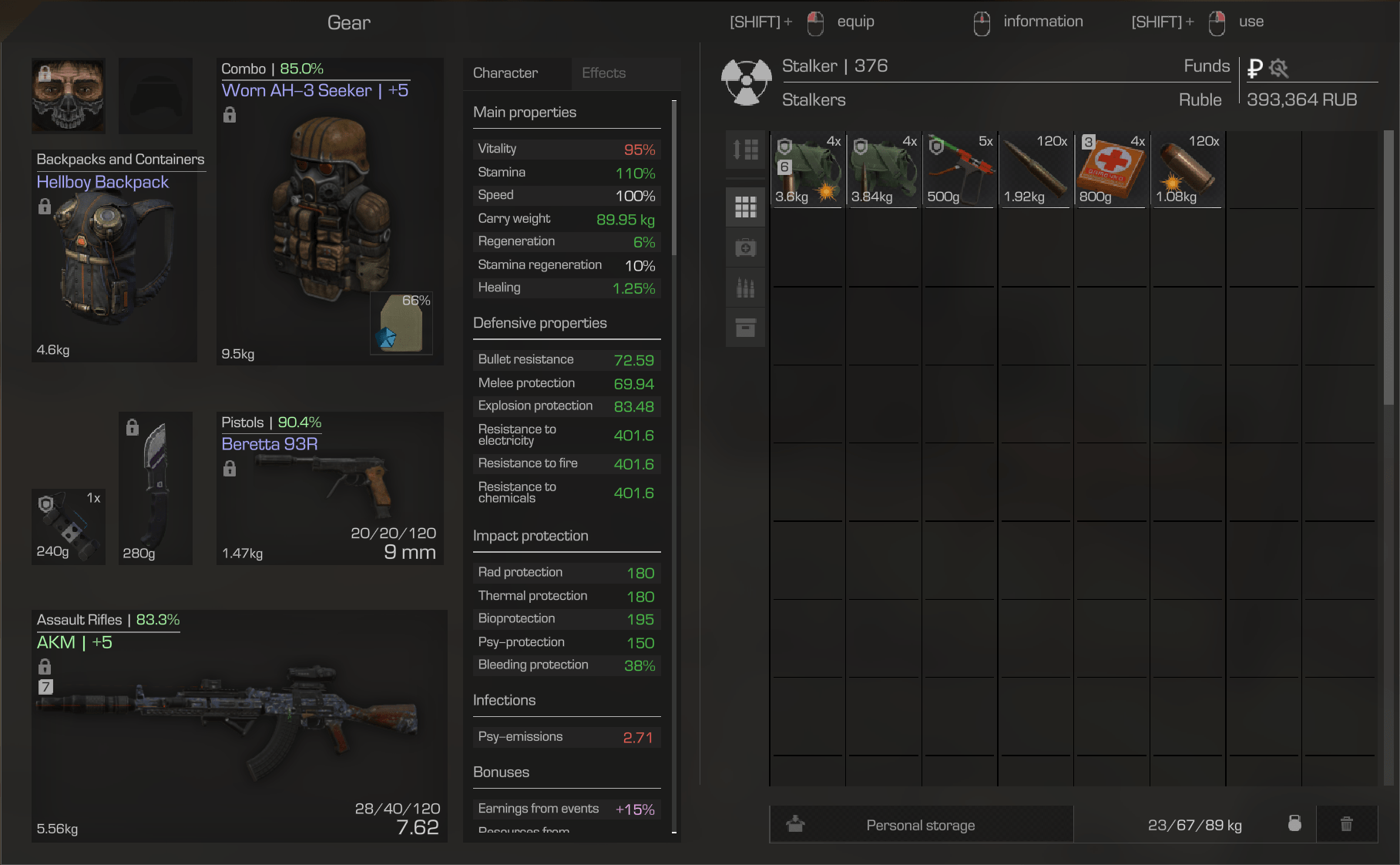 AKM: A very hard hitting mid range weapon to take out Stalker AI at a distance
Beretta 93R: My preferred pistol for the job, and obviously suppressed. The 3 round burst and perk of increased damage as enemy health drops make it possible to kill unarmored Stalker NPCs with 1 burst to the head.
Worn AH-3 Seeker: It has the best Bullet Resistance of any armor that I have available to me at the moment
A 66% Plate: Found on the ground at bar, it has some protection but didn’t cost me anything
Hellboy Backpack with artifacts
This part of the loadout isn’t optimized, preferably you’d have bullet resistance and stamina or movement speed.
Bagged ammo and meds: This is here in case you are making an extended stay on Bandit’s side as bagged ammo isn’t dropped on death.

Now let’s talk route and tactics. Below I will show different routes and how to use them effectively and the engagements and how to take them. The main thing to remember is you want to be stealthy and ALWAYS pay attention to the player counter on your map, if it’s over two, hide and wait.

As for dealing with AI you want them to shoot as little as possible. Unsuppressed fire from AI attracts players, especially lots of shots. Some AI will have armor that makes them take more shots, always expect them to have armor so you aren’t surprised.

The main difference for this guide versus the Stalker guide is that you will be taking most engagements and a medium range 20-35 meters versus 5-10 meters with Stalkers.

Here is the part that most people won’t like, do not kill players if you don’t have to. You read that right, don’t PVP in the PVP game unless you have to. As soon as you kill a player that area will be swarmed by Stalker Players and your pickle run is as good as dead. Your best option is to let the Stalker kill you in all seriousness. Take note of their name and try and message them to ask them to sell or trade the bag to you (you can do this in chat by typing @Username: he man i was pickle farming, can I get that back?).

Another method that can be useful is to run around with only fists out and if a Stalker does notice you, try spamming the surrender voice line. This works maybe 20% of the time but it is worth a shot if all else fails 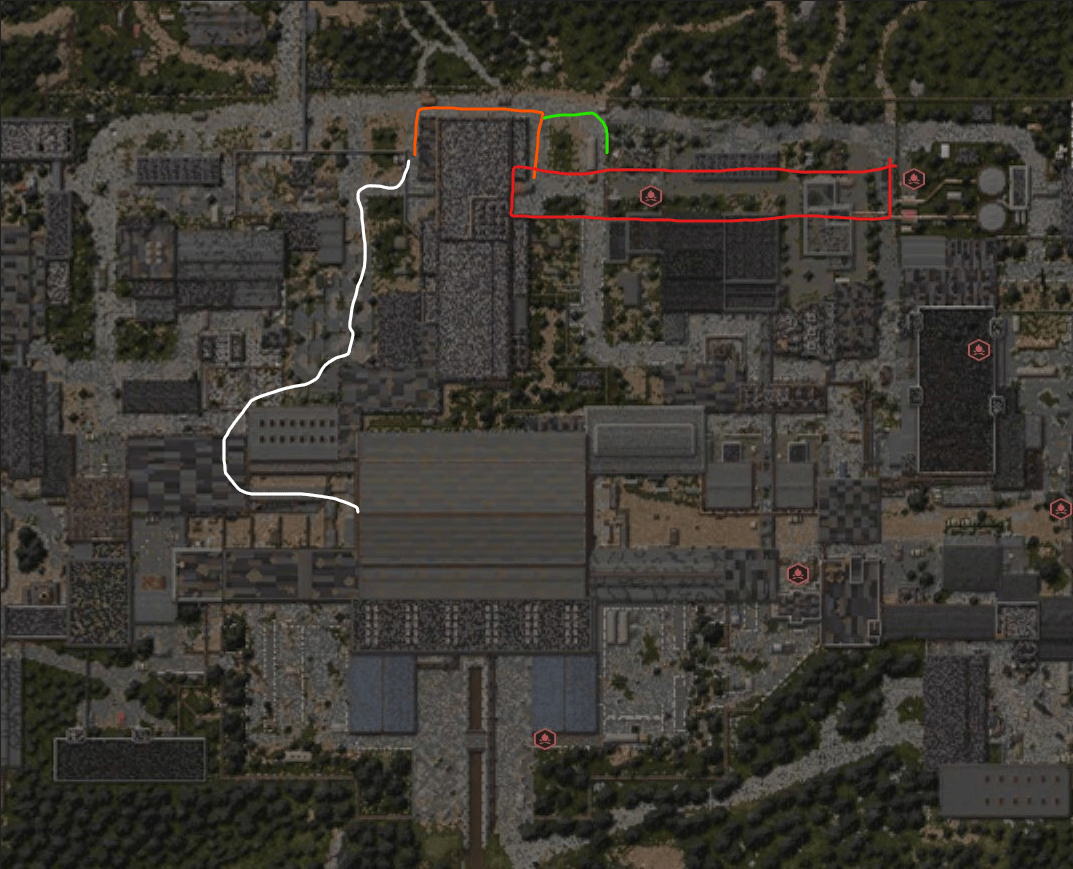 White: This Route is your initial run on Bandit side and can be done with fists out to go faster. When you come to the Rostok-Army line stick right up against the wall.

Orange: This route, if ran at full speed with fists out, allows you to get from one side to the other with full invulnerability. If you are shot at by players or AI you may be suppressed and run slower and not make it. BEWARE there may be a pack of 4 Stalker AIs on the Rostok side, if you encounter them either A) jump back over or B) run right and take cover behind the truck

Green: This route in an alternate to the orange route and provides a safer entry back into Rostok as there is a wall that you can use for cover.

Red: This area is going to be your first encounter Zone. here you will find 4-8 Stalker AI patrolling the area. Try and take them out as fast and as quiet as possible. if you get all 8 it may be worth it to just cut and run with the 24 to 32 pickles

Tier 1: This tier is the closet to your entry point into Rostok Stalker side but also one of the hardest to accomplish. Unlike Stalkers (who have an easy Tier 1) Bandits have to deal with this being the major route that Stalkers take to Forest. For that reason alone, if you see the other camps in Tier 2 available go for them first. 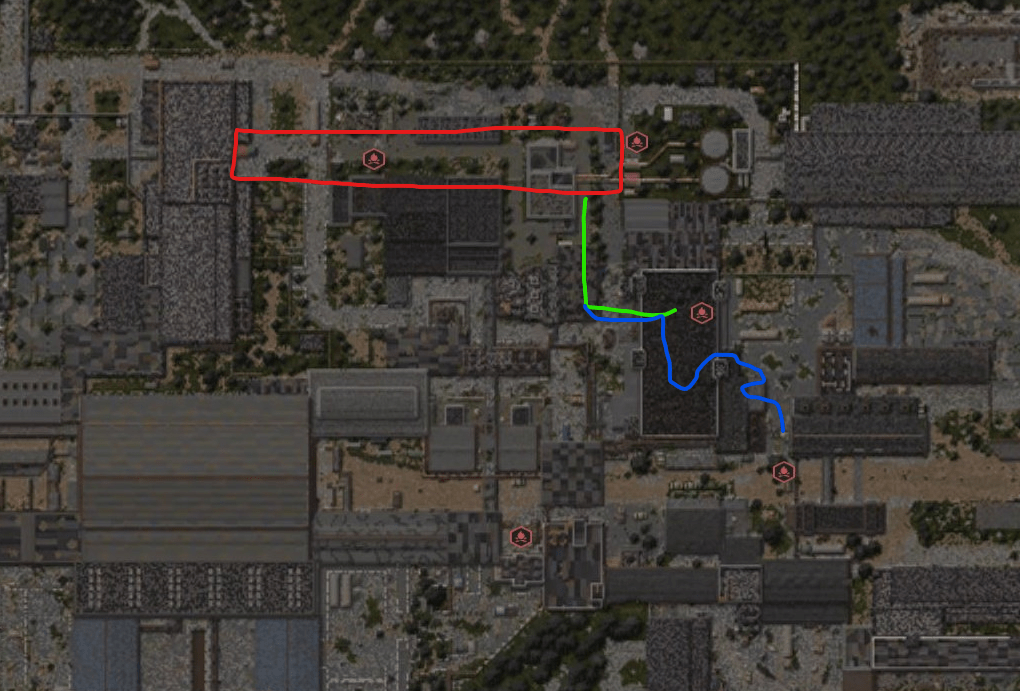 Green:(This camp should be taken using a pistol) This route is a tricky one and one that needs to be done with speed. This camp is directly in the path of Stalkers returning from Forest and should only be done if there are no other camps up

Blue:(This camp should be taken using a pistol) As with green blue is also in a major traffic area for Stalkers. This one how ever can easily be taken out with a pistol at short range. Be warned Stalkers frequent this interchange as it connects two large PvE farming areas

Tier 2: This tier is much easier than tier 1 as it is much less frequented by Stalkers and is off to the side of the farm area. 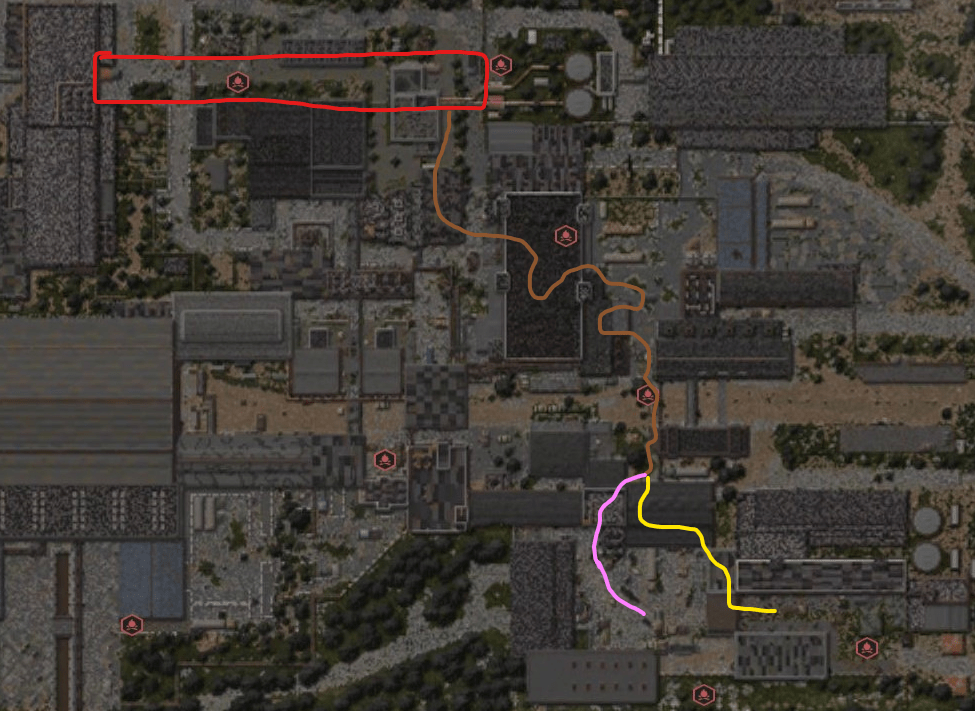 Brown: This route is what you use to get from red zone to yellow and pink routes. Stay up against the wall and once you pass the blue route from tier 1 hug the wall and be wary of Stalkers running out of their spawn

Pink:(this route should be taken with primary out) This route should be taken first if the yellow route camp is also available. You will run through a warehouse and come into a clearing. Run around the boxes to avoid the AI detecting you. You will come up to a truck with concrete slabs on it, peak right of it and you will see the camp. Again take them fast and silent.

Yellow:(this route should be taken with primary out) This route will be taken by running through two warehouses and then you will come out and into a clearing, walk directly to the truck in front of you. You can peak left on the truck be beware of a whirlygig there.

Tier 3 camp: This camp should only ever be considered if you have no pickles to show for the run so far. This run brings you directly in-front of the Stalker spawn zone and is almost certain death. 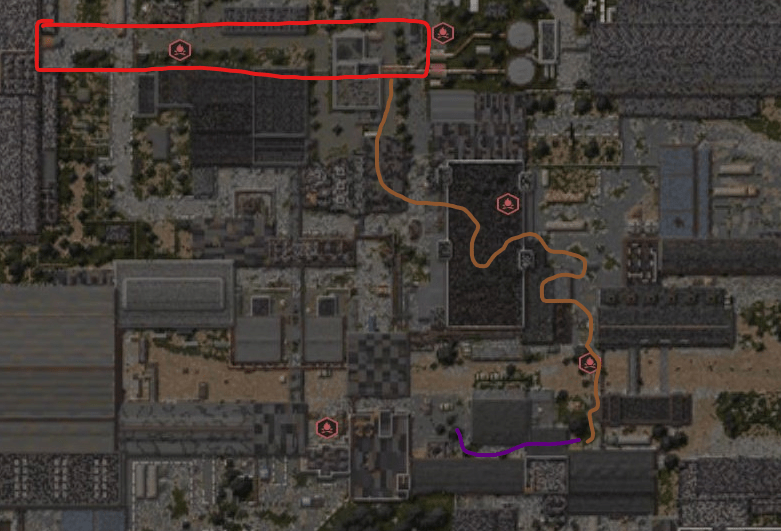 Brown: This route is what you use to get from red zone to the purple route. Stay up against the wall and once you pass the blue route from tier 1 hug the wall and be wary of Stalkers running out of their spawn

Purple: (this route should be taken using a primary) This route may seem short but it brings you directly inline of the Stalkers main exit from spawn into the PvE farming zones. This will almost certainly lead to your demise. This is your last option for pickles

For all of these routes, the best way to extract is to just go back the way you came in. If your friendly Bandits have pushed the Stalkers back you may be able to leave out the south side of Rostok. When you come to the Rostok-Army warehouse line, it may serve you better to jump out on the east side and then run along the edge until you make it to the line between sides. But keep in mind there are Stalker AI where the lines of Bandits and Stalkers meet and if you jump over too early you wont have invulnerability.

I hope you all have found this guide somewhat helpful and I will update it with any new methods or strats that I find or am told of. Happy hunting Bandits!