Scavenge those upgrade by finding all star bases.

Here is a full map of all 11 star bases locations. 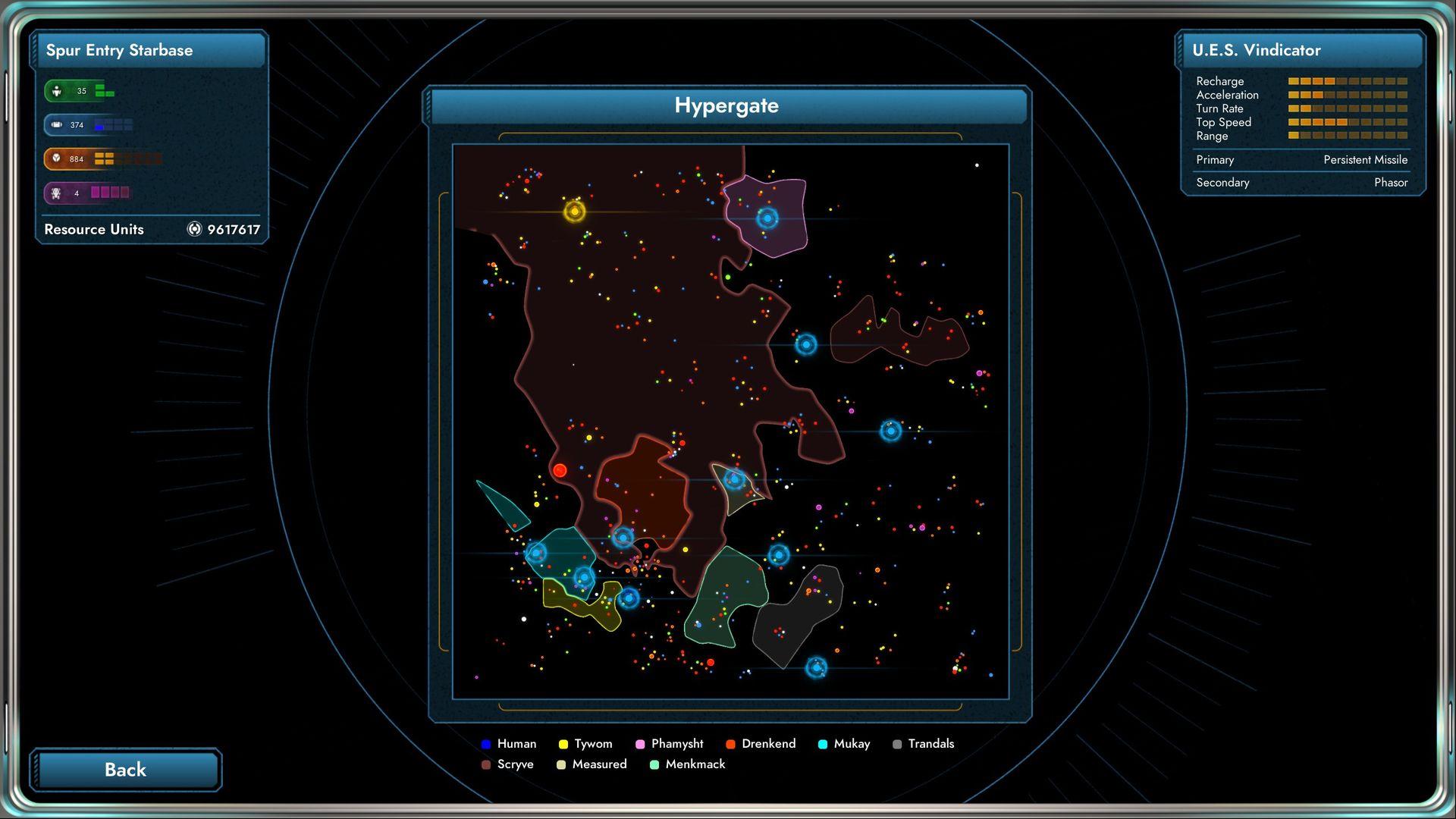 To my knowledge there are 4 Rainbow worlds in 4 different systems.

When entering a system looks for the bright colored planet with a pink hue.

Spy Alien trading ships.
When entering a system you can not mis the big ship near it’s sun.

* While traveling in Hyperspace, you can see undiscovered Space Stations only in your Minimap, but not in the Global Map. They will become visible in the Global Map after you dck and activate them the first time. Same rule applies for solar system travel.

* Minimap zoom depends on how good your installed Sensors are. better Sensors will mean the minimap being more “zoomed out”, allowing a greater view of travelling Ships and undiscovered Stations.

* You can only see other Ships’ icons in the Minimap, but not in the Global one.

* Using the Autopilot function to reach another Solar System will allow you to pass through planets, stars and also other solar systems eventually on the way.It is way quicker than manually avoiding all these things. Hostile or hailing ships will still block your path even with Autopilot.

* You will not consume fuel if you stand still while in Hyperspace.

* Fuel consumption in Hyperspace is calculated per-meter traveled. This means having a faster Hyperspace Device will not consume more or less, but will simply consume fuel faster as the distance will be covered in a shorter time.

* Every time you visit an undiscovered Space Station, a new part will unlock in the Station Shop to be purchased. Such parts will also become available to purchase in all other space stations and most traders.

* Some traders will offer unique items sold only by them. Even if discovered, such items will not be available in other places, but only from that specific trader.

* Going inside stars while navigating a solar system will not damage you: you will bounce off or scan the star if on manual drive, or pass through if on Autopilot.

* If you run out of fuel while in space, a friendly spaceship will be called and eventually rescue you, but this will take some time, and while this happens some less friendly ships may come to you.

* The damage inflicted on a Lander when failing to land in the “safe area” while attempting a planetary descent, is proportional to the distance you landed from the safe zone. A landing quite near it will knock out some crew members, while a landing very far will destroy the lander in most cases.

* You can mark important places on your Global Map using markers of various colors, and even rename them, by clicking the “crosshair” icon when selecting a solar system. They will be collected in a handy list on the right side of the Map. This function is extremely valuable in marking planets with rare resources to get later on, traders, and other things. Frequent use is suggested.

* Not all planets are equal. Planets full of gray and blue resources are not
really worth messing with.

* Generally, planets are worthwhile if there’s something else on them.

* Your ship is, well, not really cut out for interstellar travel. As you will soon learn, we humans in 2088 aren’t really ready for it. Use the Precursor starbases you find to help you. You can upgrade your engines, your thrusters, your weapons, and everything else about your ship and even your fleet. Make use of this to make your ship more powerful.

* If you are going to install the module that has the AI fight your battles for you, pick a ship that is well, good. Early on, your ship is well see #3.

* All of your dialog choices matter in some way or other even if it’s not obvious. Under the covers, the game keeps track of those choices and it can affect whatother choices might show up. But choosing A won’t mean that later on option C comes up but rather choosing enough of a certain type of reaction is likely to result in gradual changes to how the universe treats you.

* Planets are not your main source of income. There are plenty of aliens who want help or lost treasures or things to salvage. If you do find a planet with lots of green or purple minerals on it, then that’s great! But otherwise, there should be a reason to land on planets unless you just enjoy collecting stuff.

* You can enter a star system’s name in the sector map. We recommend setting a thumbtack on that destination if you think you’ll be going back there.

The main objective in Star Control: Origins is to save humanity from the Scryve menace.

An alien signal has been detected by the Star Control starbase and it’s your job to track its origin. This is the first quest the player receives in the game.

Earth is going to need allies against the Scryve, the first stop is the Tywom homeworld.

Received after making an alliance with the Tywom.

The Phamysht have information they are not sharing. They love to share military secrets when eating.

Investigate the Scryve Facility in Alpha Satori A

The Scryve have a mysterious facility in Alpha Satori A.

The Xraki have been unleashed. Time to send them back.

In case your ship piloting skills are a little rusty you can go and get a refresher course at the Ceres facility.

After forming some alliances you get the mission to obtain some hyperdrives so humanity can expand.

On the trail of the Lexites

The Lexites are a faction of humans made up of strong AIs and post-humans. Star Control’s original mandate was to discover their fate.

Defend the Tywom in their trial

After forming an alliance with the Mu’Kay you will be called in regards to the newest petition of the Tywom to join the Mu’Kay’s Federation. The Tywom are being put on trial because they gave Humanity hyperdrive technology, if they are found guilty both them and humans will be kicked out of the alliance.

Form an Alliance with the Mu’Kay

In order to join the Mu’Kay’s Federation of Allied Species you must first do a favor for them. Stop a Drenkend attack on one of their colonies.

A Mu’Kay ship has his some trouble on a research mission in Delta Horos.

The Search for Fish

After forming an alliance with the Mu’Kay they will ask you to search for potential colonies in the Wendingo cluster.

Find out what the Mu’Kay want to speak about

Some time after forming an alliance with the Mu’Kay they call you to their homeworld.

There is a Mu’Kay ship which has helped a pre-industrial civilization. Thus breaching the Principal Directive.

Form an Alliance with the Menkmack

The Menkmack have a little problem they could use help with. A moon sized creature keeps eating the atmosphere of their homeworlds.

The Menkmack would like to play a prank on the Mu’Kay.

Put an end to the Drenkend’s ear based genocide.

In order to communicate with the Greegrox you will need a trasnlation for their language.

Form an Alliance with the Greegrox

In order to form an alliance with the space fish you must get back the Ancient One’s egg.

The Greegrox are a little upset at the Mu’Kay, what with the latter hunting and eating the former.

There is a Greegrox that has remained all alone after its pod mates were killed.

Learn how to communicate with the Measured

Please fill the correct forms to start this quest, signed in triplicate.

Form an Alliance with the Trandals

The Trandals appear to be some kind of augmented species.

Must install upgrades from Trandals to trigger.

Must install upgrades from Trandals to trigger.

The Free Trandals can free you from the Overmind infection, but first you will need to do something for them.

Free some Trandals from Overmind

The Free Trandals would like you to help some of their brethren escape the Overmind.

Form an Alliance with the Mowlings

To ally with the Mowlings you will need permission from their god, Jeff, he’s a pretty swell guy.

Form an Alliance with the Pinthi

Who doesn’t want to be friends with sapient bioweapons?

Cure yourselves of the Pinthi infection

If you send a crewmember to Pinthi the entire crew has been infected. You will not receive crewmembers until the disease is cured.

The Greegrox have been attacking the Pinthi because the former believe the later are behind an attack on the Ancient One.

The Mystery Of The Vault

There is a Precursor vault for which you have to activate several antennas.

The inhabitants on the planet Charlox, in Gamma Orchidum, need some help moving to a new planet.

A Xontar Freighter in Ross 154 has some pirate problems.

The Fate Of The Sacra

The Sacra are waiting for a visitor from the sky.

You might have encountered some ships attacking you from time to time.

There is world with a rather high biodiversity, and mineral resources, in the Theta Lynx system.

There is a Norast Trasnport vessel in the Proxima Centauri system whose fuel pressure regulator has malfunctioned and can no longer move.

In the Altair system there are two alien civilizations fighting each other, the Hurnese and the Halgoth.

Gravity is a harsh mistress

The inhabitants of Havanasa, located in Epsilon Uxor, are having some trouble caused by an object on their planet’s moon that is affecting gravity.

In the Sirius A system there are two species that are having some trouble from two Kzanti Intimidators.

The Urlons are unhappy they have to share Skekaye with the Yim.

There is a rather hungry ship/creature/entity in Alpha Lynx.

The Hunt for the Clavis Aurea