Having trouble? You’ve come to the right place.

I’ve seen some negative reviews for this game with complaints that it’s difficult to curate a good team. I disagree. I estimate that I get 10 wins more than half the time, and at least 6 or 7 wins the vast majority of the time. Do I sometimes never get anything good going? Yeah, sure. But it’s rare.

In this guide I will discuss some tips, early game strategies, and late game formations that are usually successful.

There are two priorities in the early game:

All of the Tier 1 animals lend themselves toward one or the other. If you must choose between the two, pick the ones that make you Not Lose.

Since there are only a handful of Tier 1 animals, it’s worth going over them individually.

Ant – One of the strongest Don’t Lose choices as it offers essentially 4/2 in stats. You’re usually quite safe buying it.

Beaver – Somewhere between the two priorities, as its 2/2 stats are average, and it gives a delayed health boost on sell.

Duck – Entirely a setup for Tier 2, which makes it very risky. They are defeated by virtually every other Tier 1 animal except Horse (which you will rarely see without Cricket friends).

Fish – A great choice as its 2/3 stats are good, and if you do get 3 then it can buff your Tier 2 choices as well.

Horse – A very poor buy unless you can combine with Crickets. Only buy a Horse after you have a Cricket or two.

Mosquito – One of my least favorite choices. Although it effectively has 3/2 in stats, the 1 damage to a random enemy often falls flat and is basically useless in Turns 3 and onward.

Otter – Can be surprisingly good. Don’t sell your Otters too quick — combine them. If your Otter will level up or is leveled up, combine directly from the shop to get the +2/+2 bonus. Their only problem is that you can’t combine them once they reach level 3.

Pig – Somewhere between the two priorities. Usually a safe buy.

There is no perfect way to play the first few turns, but you should try to either go all-out Horse/Cricket, or else grab powerful animals like Ant and Fish for pure stats. The other choices are fine if you have no other choice. Don’t reroll the shop more than once on Turns 1 or 2. You need to buy three animals both turns. If you are building a Horse/Cricket team, it’s okay to put honey on a Cricket.

You may want to consider buying a Muffin if you’ve bought a Duck or two, to make up for your lack of stats. Otherwise, it’s usually a waste.

If you have managed to get a primarily Horse/Cricket team, this lends itself toward an all-out Token Spam strategy based on summoning new animals and buffing them with Horse. Honey can be used to add another token, but be aware that you’ll eventually want to sell your Crickets and Spiders, so honey on them is a sunk cost.

You are looking to add the following to your team each tier:

* Note: Dog is kind of a funny unit, because it gets permanent buffs when you buy animals into an empty slot, but temporary buffs from summons during battle. Try to take advantage of the permanent buffs if you buy Dog(s).

Late game, you are looking for one of these formations:

Fly/Tiger/Turkey – Turkey – Level 3 Whale – Rooster – Rooster/Deer – A good reason to put all your Chocolate onto the Turkey(s) and Whale.

Fly – Tiger – Snake – Whale – Any Tokener – A different tack that allows the Snake’s ability to trigger many times. 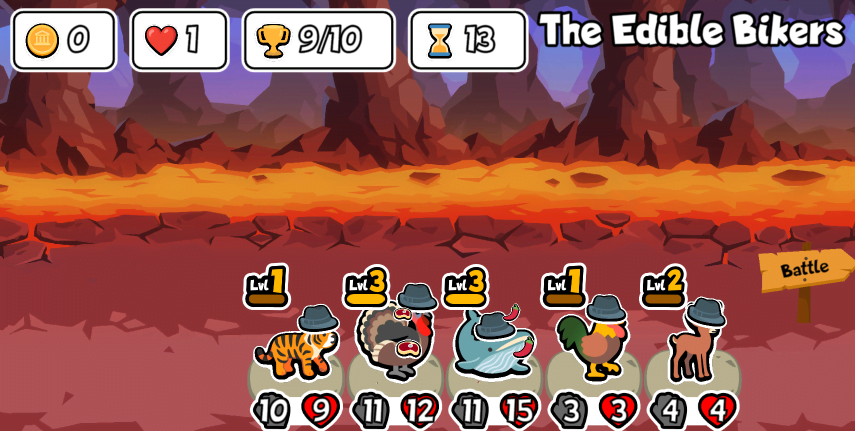 It doesn’t look too scary until the three 45/21 chicks come out and start breaking faces.

The benefit of Roosters (in this setup) is that they don’t need to be leveled, giving you more gold to spend on food and leveling your back three animals. The extra lives on the back two animals can help prevent snipes by Crocodile, Snake, etc.

It can be challenging to get this because you have to skip over Turkey entirely, but it’s still a fairly viable build.

The Dodo is a ridiculously powerful animal with a potential for deadly synergy. Although it starts as a very unimpressive 1/3, leveling a Dodo up and getting its attack power higher can multiply your team’s effectiveness.

For a start, you are looking to buy a Dodo on Turn 3 and give it some quick buffs via Fish or Ducks. Next, get it to level 2 as quickly as possible. Level 3 is useful, but is not quite as important. Alongside buying the necessary animals, keep giving the Dodo as many permanent buffs as possible from Giraffe, Pears, or even Apples if you must.

Once you get this strategy going, there is little else that can stop it except late-game Token Spam.

You are looking to add the following to your team each tier:

Tier 1 – Fish (level up with Dodo on your team), Duck (sell while Dodo is in shop)

Tier 2 – Dodo, Swan (only other useful level 2 animal on this strategy)

There is some variation on this, but it’s all centered around the Dodo’s awesome capabilities.

Swan – Giraffe – Dodo – Ox – Swan/Fish – An example of a tier 3 team. Dodo buffs Ox. Ox buffs self for a massive double attack that will break most opposing front lines. Even if you lose your front line, the Dodo itself can usually clean up.

Swan – Giraffe – Dodo – Swan/Fish – Turtle – If you get a Turtle instead of an Ox, that’s fine. It’s basically the same idea.

Monkey – Monkey – Dodo – Ox – Rooster – Your primary tier 4 goal. Continue feeding Pears to the Dodo. The monkey now buffs the Rooster, and the Dodo buffs the Ox. Very few opponents can stand up to this.

Monkey – Monkey – Dodo – Rooster/Parrot – Rooster – If you never got an Ox or Turtle, this is about the same thing. This is one of the few builds where Parrot pulls its weight, too.

(Buy/Sell tier 1’s) – Dragon – Dodo – Whatever – Whatever – If you never really got a Monkey going, get the buffs from Dragon instead.

What beats this, exactly?

If you didn’t get Token Spam and didn’t get a Dodo, your next best option is to get a very tanky animal in front, while the animals in back benefit from “friend ahead attacks” abilities or buff the tank.

Your ideal tanks are:

Bison: A good choice, but only if you have another level 3 animal on your team before you buy the Bison.

Camel: Tier 3, similar to Hippo, except it buffs the animal behind instead of itself.

Hippo: Tier 4 pure tank that heals itself on each knockout it inflicts.

Elephant: The friendly fire makes this difficult to recommend. See “Strategy 4” lower down in this guide for Elephant discussion.

Gorilla: Very interesting ability, but the fact of being Tier 6 means you have no time to buff its basic stats.

Swan: It may not exactly have tank synergy, but you can buy it at Tier 2 and it gives you more gold each turn. What’s not to like?

Turtle: Stick a Kangaroo behind it, and that Kangaroo buffs itself and then gets melon shield from the Turtle.

Once you have selected your tank, look for these other animals each level:

You are looking to make the following formations:

Any – Any – Any – Kangaroo – Tank – When you first buy your tank, you will probably be lacking a truly cohesive strategy. This is normal.

Monkey – Monkey – Kangaroo – Tank – Scorpion – In a mirror match, a Scorpion in front can help to take out an opposing supertank. Be aware that Melon Shield will prevent a Scorpion’s instakill, so put Melon Shield on your own tank.

I took a few liberties on this one in the end, but it retains the core concept of a Tank (Camel) buffed to near 50/50 by Monkeys. Incidentally, this team started out as a Horse/Cricket build. When the shop stopped cooperating, I sold it all for Swans and a Camel. You can see the result.

I do not like Elephant strategy, because I believe that it’s weak. You have to be very lucky to get 10 wins with this. It’s more likely that you’ll get 7 or 8 wins. I don’t like playing for 2nd place.

However, if you are in an unlikely circumstance, such as buying Ducks early and then being offered 2 or 3 Elephants in the shop, you may want to go this route.

Combine the Elephant with an animal whose ability is triggered on being hurt, such as Camel, Blowfish, or Peacock. You are eventually looking for the following formations:

Also keep in mind that an Elephant in the back can have good stats without hurting any friends. This is useful if you buy an Elephant without any of its synergy partners.

If you’ve somehow made it to Tier 6 without any cohesive strategy going on, your last hope is to make use of the Dragon’s overpowering buffs.

If you can, try to combine this with Turtle or Ox for the melon shields.

Where’s the fun in following an inflexible strategy every game?

If the shops end up offering something weird, it’s better to go with the flow than to try rerolling for one specific thing. Take this situation for example. I was offered enough Otters to quickly get one to level three, and I also managed to grab a Dodo and start buffing it.

Then, as a level-up bonus, I’m offered a Bison. An early Bison has great synergy with an early level 3 Otter, but I already have the start of a Dodo going. Which strategy do I go with?

This team won or drew every battle.

Here’s another, where I bought and upgraded an early Elephant… and then didn’t get any of its synergy animals. Eventually, I settled on buffing and upgrading a Rooster, with a little Scorpion backup. This team got 10 wins in a way I never could have predicted on turn 4.

I frequently find that it pays to have a backup plan and improvise when things don’t go quite perfectly. This goes for inside and outside of Super Auto Pets.

These animals usually don’t fit into a core team strategy, but they can be bought under certain circumstances.

Tier 2 Rat – The stats are unusually high for a tier 2 unit. Buy it if you are in dire need of a quick power boost.

Tier 3 Badger – Put it at the rear of your team, and its ability will affect only the opponent.

Tier 3 Snail – After losing a battle, buy and then sell. It’s usually worth it.

Tier 4 Dolphin – This can sometimes disrupt certain opposing strategies, but it’s kind of risky. Not a bad buy if you don’t have anything else going.

Tier 4 Penguin – Interesting if your other four animals are at least Level 2.

Tier 4 Squirrel – May not be too bad if you are Tier 5 and want to hunt for Chocolate.

Tier 5 Crocodile – This could snipe a Turkey or Fly and completely ruin Token Spam strategies. But be aware that it could also take out a Monkey.

Unfortunately, some animals are rather underpowered. Think very carefully before buying these.

Tier 2 Crab – Although it may be able to get a lot of health, its lack of attack is an issue. You can’t really buff the Crab, because you’ll want to buff whatever the Crab is copying. Ox is almost always better.

Tier 2 Hedgehog – Outside of countering early-game token spam, hurting your own team for 2-6 is bad.

Tier 2 Shrimp – Buying and selling just for the sake of random health is silly.

Tier 3 Rabbit – I’d rather have Giraffe or wait for Monkey.

Tier 5 Seal – Arrives too late. Ability is too random.

Tier 6 Leopard – A tier 6 animal that’s reliant on leveling up and gaining attack damage? Make this tier 3 or 4, and then I’ll be interested.