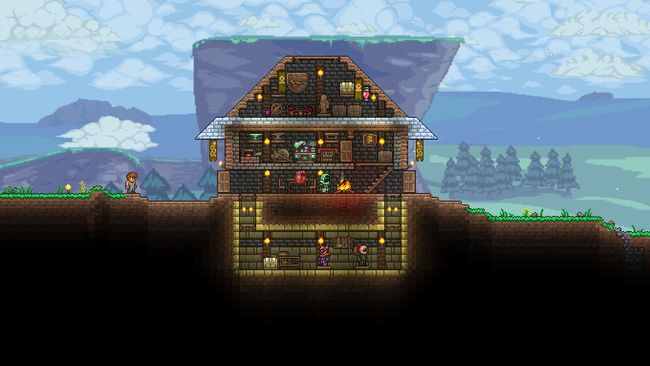 Terraria is an adventure game. It features customizable characters, randomly generated worlds, day/night cycles, reformable terrain, fun bosses, and a crafting system that allows the player to “live off the land”: Crafting items that are required for survival. The crafting system gives the player the freedom to manipulate their environment by doing anything from digging mines to building towns; it is their prerogative. You are only limited by your imagination. The game also features multiplayer.

Easy way to Getting Started

The very first thing you should do is build yourself a Livable Shelter. A hole in the ground will be enough if you are short on time, but if you want a proper house, just cut the Trees around you with an axe and build yourself a shack. As long as it protects you from monsters that emerge at night time, you and your Guide will be safe.

Now that you have a safe sanctuary, you will most likely want to go exploring caves. Feel free to do so. Here’s a list of good things to collect:

Ores: Although there are various ore types in this game, the eight main types are: Copper/Tin, Iron/ Lead, Silver/Tungsten, and Gold/Platinum. They can all be refined using a furnace and crafted into weapons, armor, or various tools using an anvil, made from Iron/Lead bars.

Mushrooms: There are three kinds of mushrooms. Normal (red) mushrooms grow on or near the surface and are relatively easy to find, which are used in many restorative potions. Red Mushrooms are a cheap way to restore health in the first parts of your gameplay, restoring 15 HP. Vile (purple) mushrooms / Vicious (dull red) mushrooms grow on or near the surface inside of corrupted / crimson areas and will be harder to find, with its only use being able to be crafted into Vile Powder, which is used for removing the hardmode Hallow, and for crafting boss summoning items. Glowing (blue) mushrooms grow deep underground, and restore 25 HP, while also crafting top-tier armor at mid-late gameplay.

Plants: You may find Daybloom around your spawn area, Waterleaf in deserts and Blinkroot in caves. There are also many other types of plants such as the Fire Blossom which can be found through further progression in the game. Save them up, as they’re used in many useful potions.

Pots: These are found in caves. They may contain everything from coins to potions, Bombs, Ropes, or even rare items. Break them by hitting them with any weapon or tool (e.g. Pickaxe).

Chests: Sometimes hiding rare accessories and loads of coins, be sure to look through them. If you’re lucky enough you could find a Gold Chest, which contains even rarer items and powerful weapons, and there are Shadow Chests which are usually found in the Underworld. It is often a good idea to collect the chest with a Pickaxe, saving you crafting materials.

Fallen Star: These only appear at night, and are easily noticeable for the light they emit. They fall from the sky. 3 of these can be crafted into a Mana Crystal, which will give you +20 maximum Mana, increasing the maximum count of Mana. Mana is used to power and utilize magical weapons, but it is limited depending on the player’s Mana count. The maximum Mana you can reach with Mana Crystals alone is 200 Mana points, or 10 stars without any boosting gear or armor. You can check how much Mana you have by moving your mouse over the blue stars in the top right-hand corner of your screen.

Heart Crystal: These are found mainly underground. Mining them with a pickaxe and then using them will give you an extra heart (+20 hp). The maximum amount of Health Life Crystals can bring the player to is 400 HP, or 20 hearts. You can check how many Health points you have by moving your mouse over the hearts at the top right hand corner of the screen. Using a Life Crystal will also let a Nurse join you (Provided you have a free house). Once you kill Plantera much later in the game, you can get Life Fruit that will let you increase your health to 500.

Once the day ends and nighttime begins, either get back to your shelter and hide in safety, or get ready to slay some Zombies and Demon Eyes. It is strongly suggested you look into making a bow and some arrows, as they combine for good damage and range. If you happen to get hurt, the heart count in the top right-hand corner of the screen will decrease. When it reaches 0, you will die. When you die you’ll;

To do this, simply have the edible item you wish to eat in the item bar at the top, click on it, then click anywhere on the background, and your characters’ Health will be slightly refilled. A faster and easier way to heal is by clicking the “H” key, AND (more conveniently) the food doesn’t necessarily need to be on your hotbar. You can also refill your Health using Potions which can be made using an Alchemy Station.

Another way to avoid dying is by hitting the Escape key and clicking Save and Exit before you die (this is easier if you have autopause on). You can refill your Health instantly (for a fee) if you have access to a Nurse. It’s now up to you to discover the rest. Who knows what you will find in this mysterious world? If you happen to have any questions, look them up in the FAQ below. If you have any remaining questions, feel free to ask them in this thread. Good ones can be added to the FAQ. If you have a Grappling Hook you can quick use it by pressing the E button and aim it with your mouse, the hook just needs to be in your inventory.

Tips for progressing into the game