How to get all 8 town slimes for the achievement.

Found underground in the cavern layer, and more commonly in the dungeon, and is locked in a regular chest. You will need a golden key to unlock the chest. The chest moves around like a slime, so it is easy to notice. The Elder Slime will not spawn unless Skeletron has been defeated. The lifeform analyzer will show it as an Old Shaking Chest. The chest will despawn if you go far enough away, so make sure to bring a golden key!

Arrives like any other NPC when a natural party is happening. He will not arrive if you use a party center. 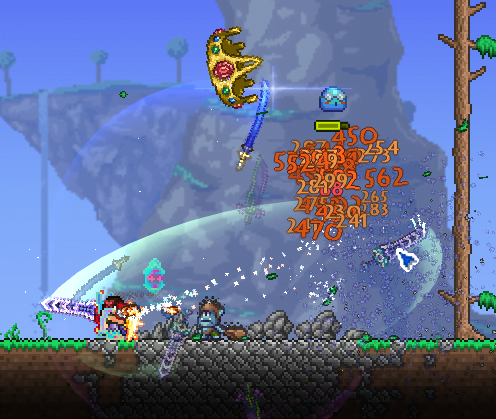 Here he is spawning exactly where King Slime dies.

Craft a copper helmet, and drop the helmet to any basic slime. The slime will transform into the town slime. Using the Royal Gel helps to not accidentally kill the slime. Unfortunately it can not be a tin helmet. Some ways to gather copper from a tin world would be fishing crates, the Extractinator, or the Chlorophyte Extractinator to swap ores. 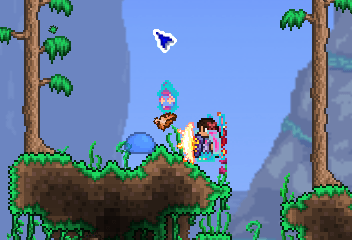 As soon as the helmet touches the slime, it transforms.

While anywhere in the jungle, a mystic frog can spawn. Using purification powder on it will turn it into the town slime. You can kill it, so use the Guide To Critter Companionship item, and don’t use summons. Also, it helps to be near a town so monsters do not spawn. The mystic frog does appear on the Lifeform Analyzer, which helps. It seems to spawn more commonly on the surface, but it can still spawn underground.

During a blood moon, you can fish up this town slime anywhere. Using a Chum Caster can increase your chances of fishing him up. Sonar potions also help if you don’t want to waste bait, or are trying to get him as quickly as possible.

Can be found randomly during a windy day flying on a balloon. Unlike other balloon slimes, you need to be in the Space Layer for it to spawn. Floating islands can be a good place to wait until one shows up. The Clumsy Slime can fly away and despawn. 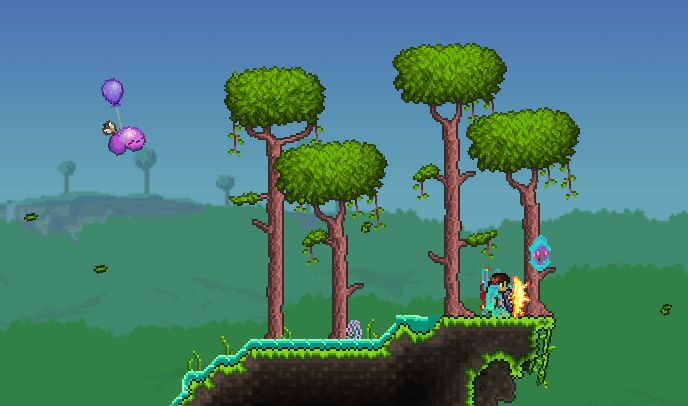