The Centennial Case: A Shijima Story Walkthrough and Gameplay Guide

SInce this game is bad at explaining things, and currently lacks a Steam tutorial on how to fully complete the game, here’s one that’ll hopefully help out. If you just want some general advice this guide gives some of that too.

The most confusing gameplay mechanic in the game is the cognitive deduction space. This is where you combine mysteries and clues to create hypotheses (theories/possibilities). The game does a very bad job (in my opinion) of actually explaining the theory behind it, so I’ll try and do a better job. 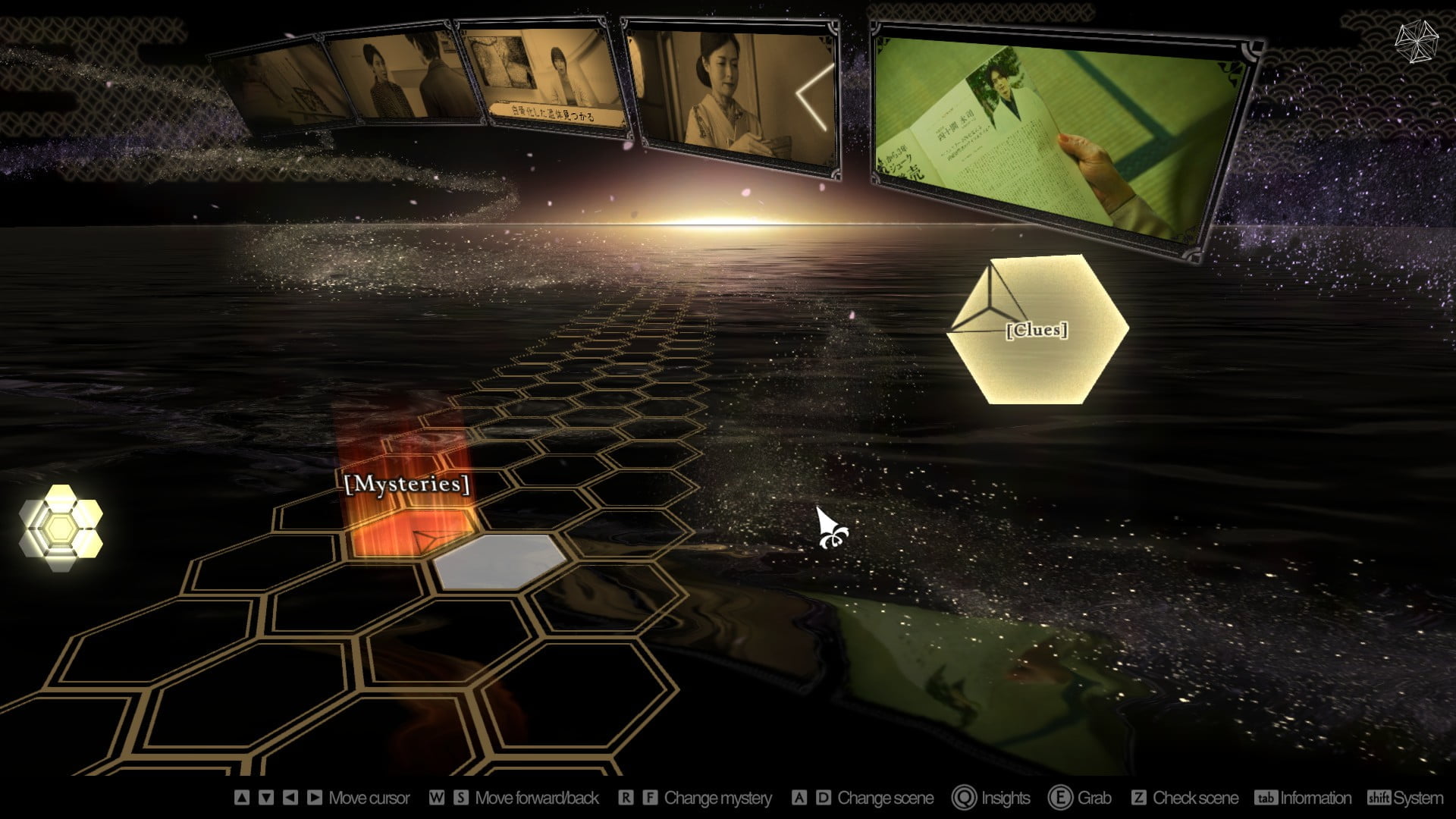 This shows a cognitive space before being filled in. The yellow hexagon can be clicked and dragged from the appropriate video to the empty gray hexagon. Note how the triangles on the yellow and red hexagons match perfectly. 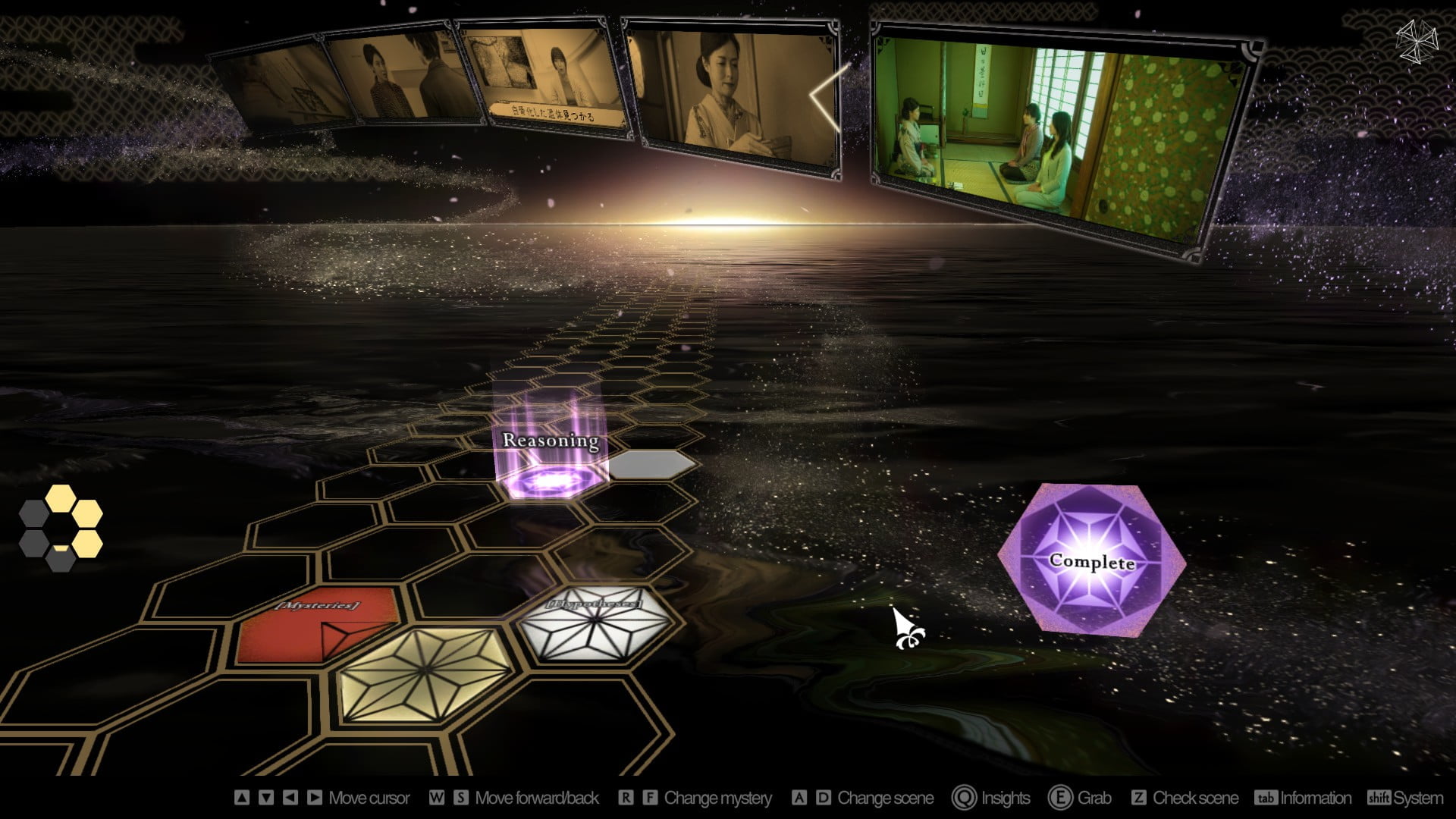 Once complete, you can see the purple hexgon has appeared. Also note the white hypothesis that appears next to the yellow clue once it is correctly placed.

The remainder of the gameplay is very straightforward, but worth making clear on how it works and what it does.

Pay attention the video, as at times, clues will appear as floating text when something unusual/odd is heard or seen. Pressing the appropriate button (it will show up along with the text) will cause the clue to be collected for later use. Whilst this is not required (any missed clues will be automatically added to your Cognitive Deduction Space when the time comes), you must collect all those which appear for achievements.

At times, dialogue options will appear. These are selected by pressing and holding the appropriate button for a few seconds. So far as I can tell, only those during the revealing phase (i.e. showing everyone whodunnit) have any real impact, with most of them being solely for flavour. Any where your choice does seem to matter I have included in the walkthrough lower down the guide.

Reasoning Evaluations occur at the end of most chapters is the point where whatever mystery has occurred has the strangeness resolved and the culprit identified and (hopefully) made to confess. This is mostly a series of dialogue options, including picking from hypotheses you produced. For each part you do right, you earn 100 points. Earning max points gives you an S rank. Getting an S rank on all of these is required for an achievement.

This section contains spoilers for chapter 5. Chapter 5 goes down a completely different path to the rest of the game, turning into a point and click puzzle game. You can turn your head to see different things and click on hotspots. Hotspots are usually labelled, and always change your cursor so you can easily identify them. Examining things will give either mysteries or clues. You can then swap over to the Cognitive Deduction Space to combine clues and mysteries in order to produce hypotheses on how certain items can be interacted with. The only troubling part is when you have to produce a map by placing items onto it. For some reason, the placing is very precise, so if it isn’t working for you this may be why.

Most of the achievements this game offers are either unmissable, or easy to obtain. I’ve listed them all below by name and requirements with spoilers over any plot-sensitive details.

You’ll get these just from completing the game.

These require you to obtain all the data the game throws at you.

Sometimes, we just need a few helpful bits of advice on how the game “thinks”/works to help remove possibilities and move along our own deductions at home (assuming you’re actually trying to solve the mysteries the game presents). Here are a few bits of general advice concerning ways to help with getting your deductions. Spoilers are tagged where needed.

Just because it amuses me, here is a very spoilery picture (only look if you have finished the game) that is a good lesson in sticking to what you say.

The rest of the guide is dedicated to a walkthrough. The walkthrough is not a full list of everything needed for every choice and achievement in the game. Clue collecting is up to you, as it is simply pressing a button when the prompt appears. Dialogue choices which have no effect on the gameplay are ignored as these are entirely at your discretion. I have spoiler tagged each line individually for Reasoning Evaluations so you can avoid accidental cheating if you just want to confirm your deductions line-by-line to ensure max points or whatever. I have done chapter 5’s point and click section as a single spoiler section as its size and sandbox nature makes doing it one line at a time a pain in the ass for both reader and writer.

Someone was disguised as the mummy
Not the killer
Ginsaku wouldn’t have given the mummy the key
No-one at the entrance hall was the mummy
Killed after we saw the mummy
Masanori Minami
You hid it somewhere, didn’t you?

Everyone followed Ryoei’s lead at the cherry blossom ceremony

None of the three man
Mitsunori can’t push the sword in the tree
Takehiko didn’t know the meeting had ended
Kazunaga’s footprints weren’t outside the door
The killer put water in the water can
To make a pendulum (yes, somehow sillier as see-saw effect)
Yoko “I heard thuds…”
Yayoi
She didn’t notice the body even though she passed by it

This is the last chapter where on-screen clues appear. If you’ve reached the Reasoning Evaluation and still haven’t obtained All-Seeing Observer, you’ve missed some. Go back through the game after you complete it. They start in the prologue.

Yayoi isn’t the one who hit Nishimari

Point and click game time! Please note all of the point and click stuff is one big spoiler chunk rather than separate lines. Keep in mind that as well as entering Cognitive Space at any time, you can also open a journal for hints, advice and objective reminders. Hotkeys are displayed in the upper-left of the screen.

Examine your legs.
Use Cognitive Space to get answer
Examine rope
Shake loose nails holding down the chair
Enjoy cutscene.
Examine all available hotspots (you’ll need to move your head from max left to max right to find ’em all)
Use Cognitive Space to make plan.
Examine pillar, break the okame mask to make sharp edge, and washstand basin is within reach if pulled over.
Now we are free, we can quickly get the Dark Secrets of the Shijimas achivement by finding the 8 books. They are found:
Examine books on small table left of wooden bars, click on blue book.
Examine top hotspot on shelf left of table, click on gray book and near the upper-right of the shelf.
Examine bottom of the shelf. Examine around the middle area, and the blue book.
Examine the books on the other small table, on other side of room. Examine the books.
Examine the stack of boxes near the black square on the wall, to the right. Examine the book on the top, and the bottom box.
This should be 8 books total and trigger the achievement.
Examine the black square to reveal it’s a speaking tube.
Examine floor left of speaking tube.
Examine the newly revealed secret door. Examine the hotspot until you insert numbers. They’re wrong.
Back out, examine wall, investigate new hotspots and then return to the speaking tube.
Look up, 5 new hotspots have appeared along the top of the wall around the animal pictures, investigate them.
Enter Cognitive Space and fill in the blanks.
Go back to the secret door lock, and pick “The Myth is the clue to the numbered wheels”. The number order is 5,3,2,1,4.
We now need to produce a house plan of the estate based on the speaking tubes and inspiration within the cell. Go back over all the hotspots in the cell (particularly the now open secret door) until you have 6 vents, 2 cells, and 6 rooms (including info you already started with) on your Cognitive Space.
Room order from left to right: Servants’ room, Kitchen, Eizan, Study, Saeita’s room.
Vent order from left to right: Sixth, Fourth, Fifth, Third, Second.
Yoshino’s cell and first vent are in the storehouse at the upper left.
Josui’s cell is at the far right, off of Saeita’s room.
Take heed of the images associated with certain vents, it’ll help you do the next Cognitive Space.
Do the Cognitive Space.
Examine the question mark on the wall.
Select Look for key, then Eizan’s room.
Examine question mark on the wall.
Select Eizan’s room window, then servant’s room
Examine question mark on the wall (oh baby, a triple!)
Select send smoke to study.

I’m unsure if these require correct answers as i ran out of time for testing.
She said she bashed her head in with a rock in her confession
She’s covering from the Scarlet Camellia

The next Cognitive Deduction Space is split into three. As you unlock each of them, you can return to other ones by pressing the hotkey you used to enter the space in the previous chapter (it’s noted at the upper left of the screen when you’re in the space too). This is handy for reminding yourself of past hypotheses. You will at certain points have the chance to either press forward by saying something like “Maybe this person” or going back to the deduction space by remaining unsure.

They’re ageless and with us right now :O
Eizan was not the Scarlet Camellia
The red camellia was placed before Eizan returned
The Scarlet Camellia couldn’t enter the room
Towako Nagahama
Towako hated smoking
The Scarlet Camellia fears fire*
The killer stepped on the matchbox
Eizan died after being stabbed in the chest (his other wounds remain unexplained)
Megumi Kiryu
Someone other than you
Josui’s been dead over 50 years
Nishimari wasn’t killed with a rock
Lighter
You were at the club that night
Rather than picking a clear image of her, you have to spot her in the background. I think it’s the eighth image from the start. It has Ryoei and Iyo chatting in the foreground with a woman in a floral dress in the background (the one who had no candle on her table, if you recall).
Eizan Shijima

*Personally I am still convinced that “The Scarlet Camellia couldn’t enter the room without risking setting off the rope trap and alerting people to their presence” is also a pretty good reason for them not entering the room.

Once the game’s credits are over and you’re back on the main menu, scroll down to the bottom of the menu, below the where the main menu options end. You’ll select white cloud that says “You got mail.” select it.
You’ll have one last Cognitive Deduction Space. Completing this should get you Master Sleuth and Omniscient Insight.

Akari Yamase is Josui Sakaki
You

You’ll have the final final Cognitive Deduction Space at some point here, but since this uses none of the deduction mechanics it doesn’t really count. It’s mostly for show.
Yoshino Shijima (yes, another one-person choice)

Congratulations! You completed the game! And this guide! If you’ve not got the No Stone Unturned achievement at this point, time to go back and see what you’ve missed (assuming you care).