The Lord of the Rings Adventure Card Game: Action Advantage & Board Control

To win against Sauron consistently, you must learn not just to survive each round, but to wrest control of the board from the Dark Lord, so that he must react to your plays instead of vice-versa. This guide introduces the concepts of dynamic board control, absolute board control, and action advantage, and provides in-game and deck-building strategies to maximize action advantage to ensure that you call the shots in the game, not Sauron.

A central feature of this game is the back-and-forth play between the player(s) and Sauron. Because there is no option to skip an action — only to end turn — a meta-game ensues to see which side can outlast the other in terms of number of actions. Whichever side passes first gives the other side a powerful opportunity to act without any reprisal, and thus to control the board.

It is, therefore, to the players’ advantage to maximize the number of actions they can take in any given turn. This guide outlines a basic strategy to ensure that the player call the shots, not Sauron.

Board Control: The situation where you are playing proactively rather than reactively. There are two basic types of board control: dynamic and absolute.

Dynamic board control is achieved during the round when you force Sauron to react to your plays instead of vice-versa. Your goal every turn should be to get a “free” action to which (ideally) Sauron either cannot respond or (more often) can respond, but in a predictable way. Being able to do this depends on timing your actions properly and also on the total action advantage built into your deck (see next section). Here is a good example of a player in dynamic, but not absolute, board control. 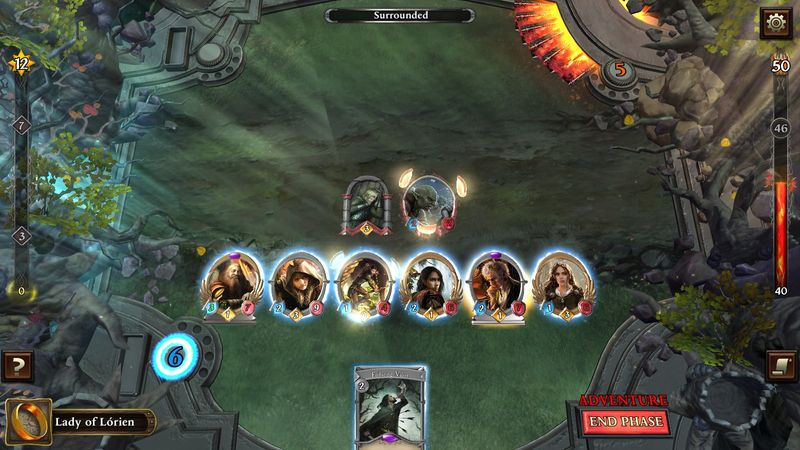 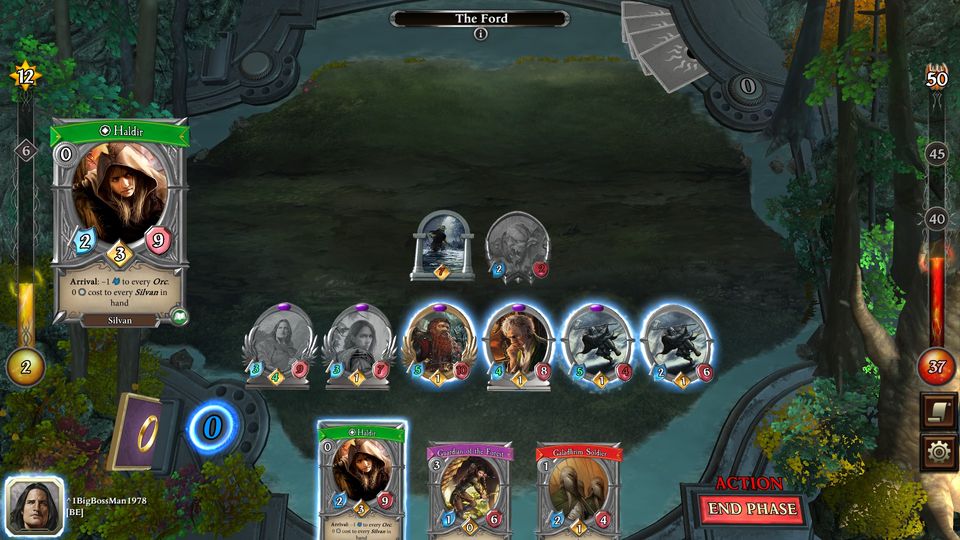 Action Advantage: Any strategy to increase the number of actions available to the player(s) in a given turn.

An action involves either playing a card from hand or using a character (hero or ally) to attack an enemy, guard, quest against an objective, contribute Fate, or use a power.

Action advantage can thus be gained through a balanced combination of card draw, low cost or reduced cost cards, and resource generation. To give an example, the tactics event Lock Shields is a powerful card because it has 0 cost (check), draws another card (check), and gives a character an additional action (check, see below). 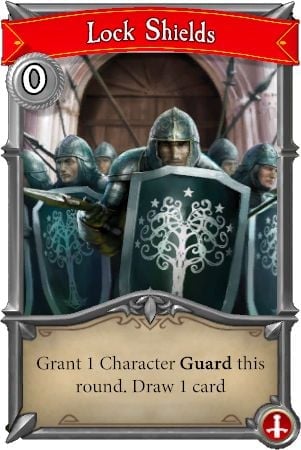 However, Sauron can generally outmatch the player(s) in a head-to-head contest of playable cards. This is especially true on Challenge mode, where Sauron draws more cards and gains more resources per turn than you do. So while maximizing playable cards is necessary, alone it is an insufficient strategy to gain action advantage (and thus board control). Hence, the key to action advantage is beating Sauron in character actions, both dynamically and absolutely.

The number of characters is limited to 7, including the three heroes. While it’s critical for action advantage to reach 7 characters as quickly as possible, it is also a hard upper limit that can be directly balanced by Sauron filling up his board (not uncommon when traveling to a new location).

Extra action advantage is best achieved through characters that can take more than one action per turn, which should be considered during deck-building (see below).

There are several play strategies to increase action advantage and secure dynamic board control. Be aware that it is dynamic, however, and that Sauron can always turn the tables on you!

(1) Entering the round with one or more characters on Guard — either from taking the Guard action in the previous round or that have the Guard ability — lets you begin the round with dynamic board control, as Sauron’s AI will always attack with any ready minions before he starts to play cards. Since you know exactly which minions are on the board, you can predict what Sauron’s actions may be. While Sauron is busy attacking your Guarded characters, you have a “free” action for each of your characters with Guard. This lets you play out key attachments, events, and allies that you may need later in the round. Note that Guard on Sauron’s minions is not quite as powerful for him, precisely because the AI almost always attacks first before playing cards from hand. 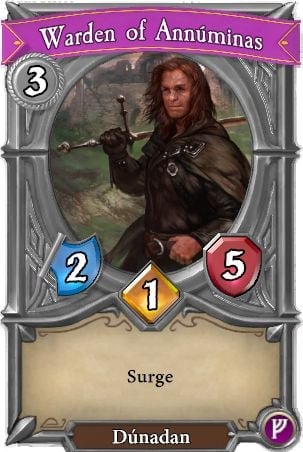 (2) The Surge keyword is a powerful way to flip control mid-round, as it essentially lets you take two actions in a row. For example, you might play a Warden of Annúminas and immediately Guard, effectively granting you a “free” action the following turn. Note, however, that Sauron has equally powerful access to the Surge ability, as well.

(3) Killing Sauron’s minions while they’re still ready takes away an action from Sauron. To replace that lost action, he must take a turn to play a new minion. In addition, eliminating enemies before they can act prevents damage, which contributes to keeping your own characters alive to take their actions.

(4) Healing, therefore, is the last major (indirect) strategy to dynamic action advantage, because it prevents Sauron from killing characters before they can act. Note that the Block ability serves a similar purpose, which is why attachments that grant Block are generally very important for decks running Tactics or Leadership.

In terms of deck building, action advantage is best achieved through characters that can take more than one action per turn. This can be achieved through native abilities such as Stalwart, Guard, or Vanquish, but also through attachments that grant these abilities.

As this guide has explained, finding success in The Lord of the Rings: Adventure Card Game means learning how to wrest control of the board away from Sauron so that you can take “free” actions without fear of reprisal from the Dark Lord. To gain board control, players must first understand the nuances of action advantage, which should be sought both in the decisions made while playing the game and those made while constructing a deck. This guide has provided some basic pointers on strategies in both regards.