Abandoned Mining Outpost is one of the Locations in The Outer Worlds. Abandoned Mining Outpost is a location in Scylla. Players will arrive here looking for the Hermit for Vicar Max’s quest. Locations are defined by their individual and varied biomes spread around the Halcyon System. Planets and other celestial figures house the inhabitable regions in The Outer Worlds.

This quest is only available if you have completed The Illustrated Manual and recruited Vicar Max into your party. Once aboard the Unreliable, talk to Max and ask about his religion and interests to find out that he is in search for a translator, and has ideas of where to get one. He will mention going to the Groundbreaker and hacking the security terminal to identify and locate the translator.

Once at the Groundbreaker, you can approach the security desk past customs and talk to Pvt. Lee Flores. You can ask him what he does and then ask if they do tours – he will mention that if you clear a bounty and make good with Cmdt. Sanita or help Chief Tennyson fix the head you might get a thank you tour. You can try persuading (45) for him to do you a favor, or bribe for 710 bits. (3600 xp for getting in)

If you cannot do the persuasion check, grab the Mardet ID Cartridge that is laying on top of some boxes, on a smaller room near the workbench.

The persuade check will allow you to enter the room without being attacked. Sneak toward the cartridge and eject it from the terminal (3600xp). You can also read some notes on the bounty and confiscated goods. You will now have Groundbreaker Customs Databank as a quest item.

Talk to Vicar Max again (3600xp) and he will identify Reginald Chaney who has joined a Sublight salvage crew and has a domicile in Monarch – Fallbrook. Use perception to ask what he’s hiding from you and he’ll say he just thought it was a long shot.

Once you arrive at Fallbrook in Monarch, go into Reginald’s residence by the Sublight Dry Goods & Sundry to earn 3600xp. Inside, you’ll find Reginald Chaney’s Gold Panning Log and learn that he has found a spot that yields some nuggets on the outskirts of town.

Find Reginald Chaney chilling by the river, and Vicar will confront him. You’ll find out that Max was lying about finding a scholar – Reginald is a former immate that shared prison with Max. Max wants revenge for being tricked, but Reginald claims he can find a translator. You can help Max calm down or encourage him to go on. If you let Reginald explain, he will reveal the book belongs to some expert on Philosophism residing in Scylla. Let Reginald go and you’ll get 3600xp. Max will later be thankful that you calmed him down. If you encourage him to be violent Reginald will still explain about Scylla, and then you can tell Max to kill him if you want. You will gain Negative Reputation with SubLight Salvage & Shipping though.

If you talk to Max he will reveal that he ended up as a prison guard due to revealing an unsanctioned belief to a superior. You can ask why he lied to you and he will apologize. You can kick him off your party or accept the apology.

Go to Scylla
Next head to Scylla in your ship. You’ll want to head east to the Abandoned Mining Outpost. There will be Marauders, Primals and Automechanicals in the way so be careful. Once there, head inside the Hermit’s Lodge and speak to the Hermit.

If you killed Reginald you can try to persuade (65) the hermit to help Max. Otherwise, she cannot be convinced and you will gain 3,150 XP. Speak to Max to gain a further 19150 XP and some Bit Cartridges which will complete the quest.

If you didn’t kill Reginald: Talk to the hermit and ask for a translation, and you can observe a conversation between Max and the Hermit that will result in her asking for certain ingredients that would “speed up the process” for Max. Agree and you’ll get 3600xp and your quest will update.

Head over to the room next door and interact with the incense to experience a cutscene and obtain 3600xp. Encourage the conversation and keep it positive if you want a positive outcome. At the end of the vision, Max will be a lot calmer. 19200xp, Incense Vessel, 2200 Bit Cartridge

2. Weapons From the Void Walkthrough

Read through the logs on the computer in the captain’s quarters aboard the Unreliable to obtain this quest.

The Shrink Ray is located in Phineas’ Lab, which you can travel to as soon as you depart the Emerald Vale. It’s sitting on a small stand right in front of Phineas Welles.

To get the Prismatic Hammer you need to purchase the Battered Mardet Datapad from Gladys on the Groundbreaker. Go back toward customs and find the rest room with all the beds for the Stevadore. You’ll need to jump up on top of the beds (using the crates near the door) and then drop down behind them and kills some enemies. Loot the Repair Hangar Keycard from the Outlaw Squad Leader and open a locked door to find the Hammer. (3500xp) A nearby terminal will have some lore information. 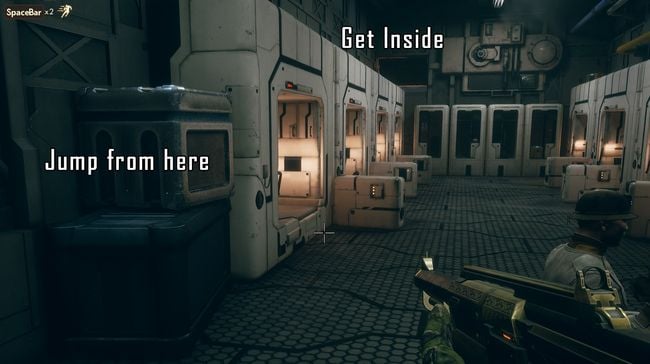 Purchase Hephaestus Mining Archive Cartridge from Gladys on the Groundbreaker. Bring it back to the ship and go to your cabin and use the log to read up. You’ll get 3500xp and a tip about a weapon in Scylla.

Head to Scylla and visit the Abandoned Mining Camp. One of the buildings has a green box with the Mandibular Rearranger in it. (3500xp)

Purchase the SubLight Datapad and Damaged UDL Datapad from Duncan Elley in Fallbrook on Monarch to get clues about the next weapon.

Head to the UDL Lab northwest of Fallbrook. You can pick up UDL Lab Weapons Terminal Keycard from a table on the second floor, where you kill the ringleader. You can bring the UDL Lab Weapons Terminal Key Card to the 1st floor and interact with a terminal. You can unlock the weapon they have been developing with Hack (55) or answer: Protect the Chairman, answer: Berate him relentlessly to defend the Chairman’s honor, answer: Arrest your spouse and admit your children to a reeducation program. This will get you the Gloop Gun Science Weapon.

Head to Rizzo Secret Laboratory in Cascadia. You’ll access this for the quest Space-Crime Continuum. Go through the whole lab until the very end by a lift heading back to the surface. Go toward the lift and look right – there’s a gap to jump across, leading to a ladder, another jump and another ladder. You’ll find a dead scientist and a safe that contains Mind Control Ray. (3500xp)

You will gain 14000 XP from gathering all of these Science Weapons.