So first, about basic mechanics. You fight against your opponent who plays its cards. Your card deck is on the bottom half and your opponent’s is on the top. Initially, each player has three cards. Units can be played on one of two rows: melee or ranged. The ranged row is next to the melee one, closer to the center. 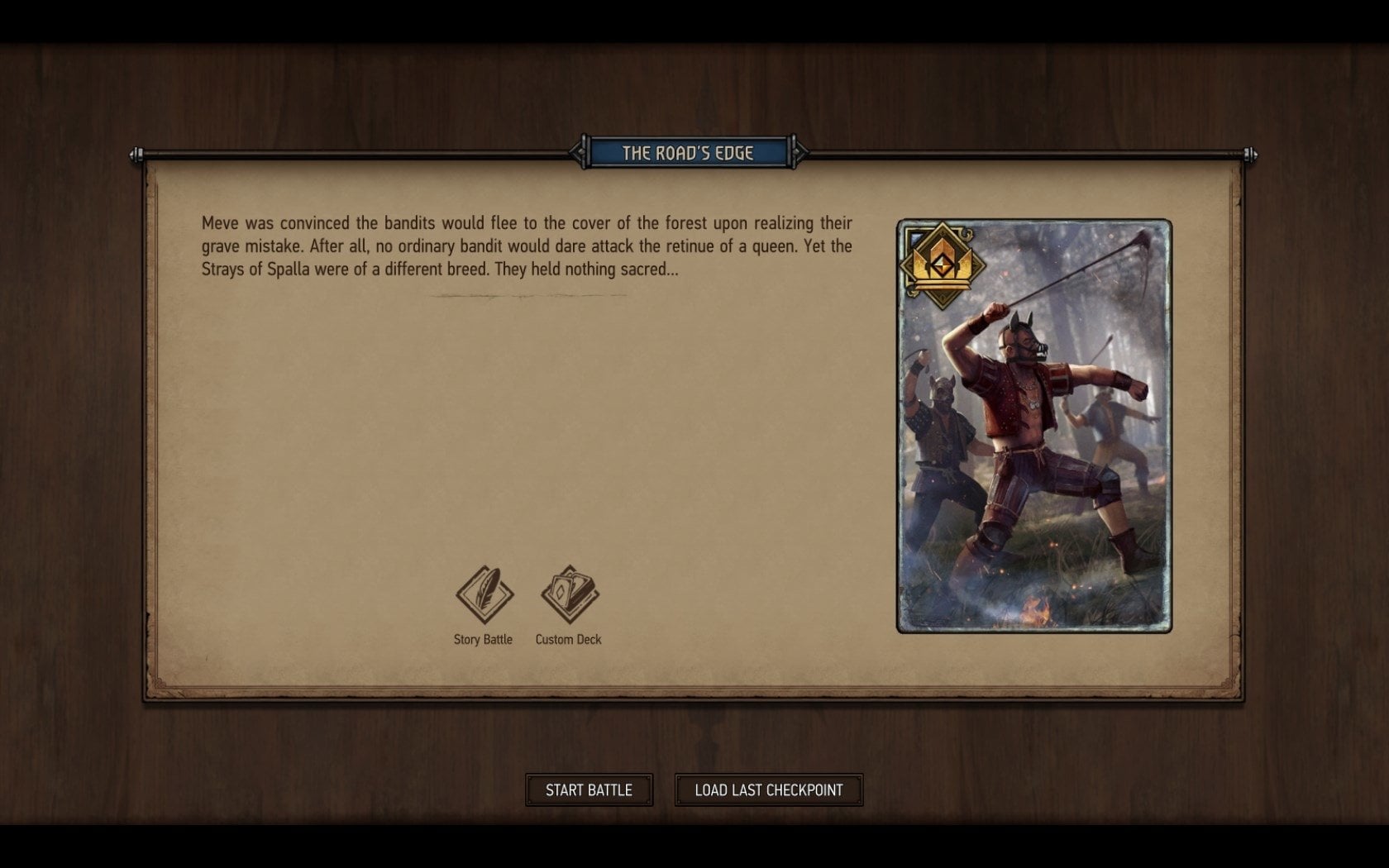 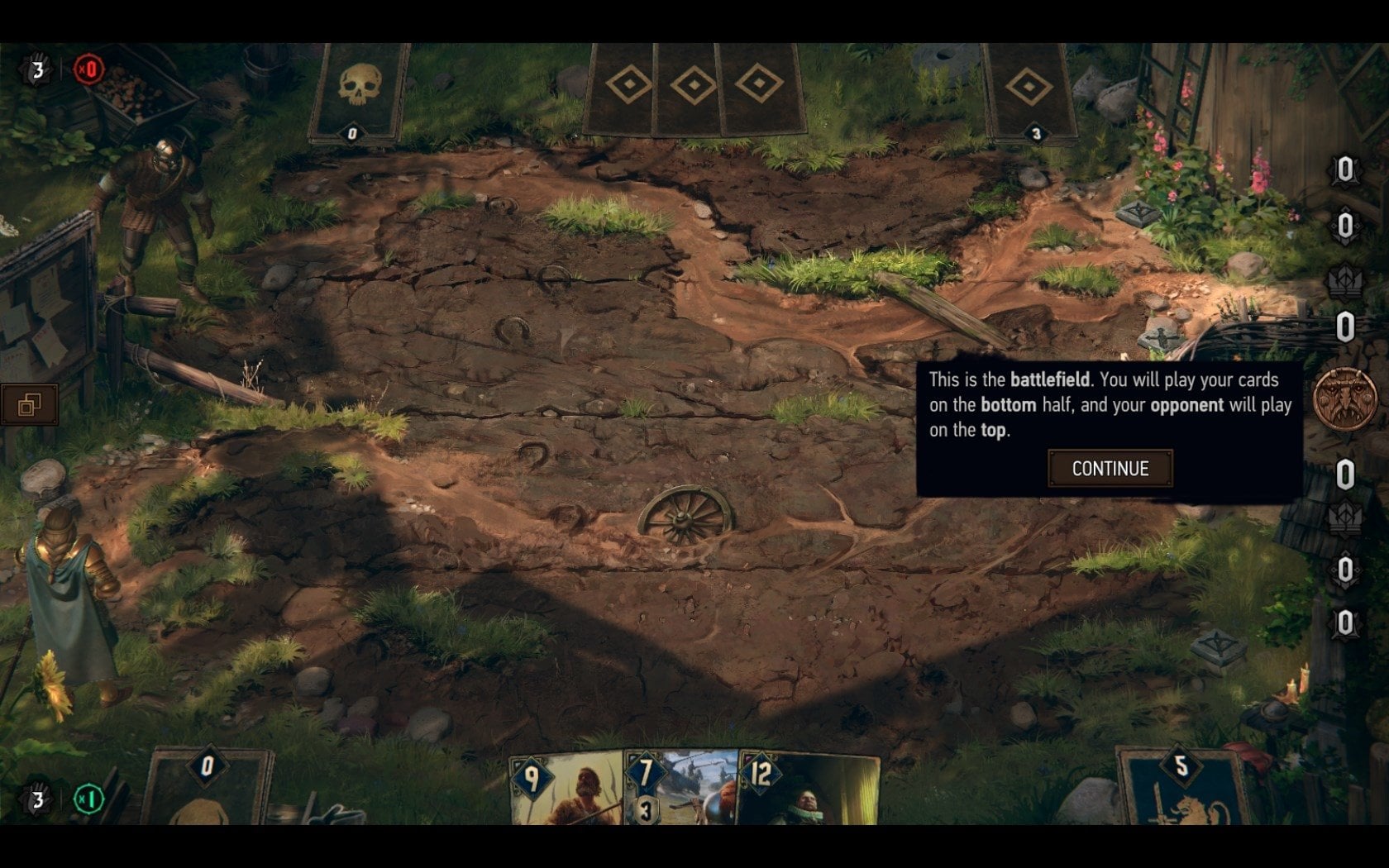 The player who initiated the battle goes first. The player who won in each previous round goes first in the second and third rounds. Each unit card has strength points. The player with the most strength points at the end of a round will win the round. You may attack your opponent’s cards or boost a unit’s strength by using different types of cards. So it’s not enough to have the high-value cards: you should combine them in the right way to win a round.

You should also use a leadership ability (Meve in this case). She can add strength points to your cards. If you use Meve’s ability on the unit with a Loyal ability, it will double her bonus.

After winning, take the loot and go down the road until you reach Lyrian Plains. Here you can pitch your first camp which can be seen in an inventory management screen. Press the tent button on the left side to open this screen. Follow the instructions and upgrade the tent to level two in order to open a regional map (-1000 gold, -50 wood).

Get to the gray tent to learn how to create cards. Read the instructions, find the Wagenburg card (in the middle) and right-click. Then press the Recruit button at the bottom of the screen. Confirm the recruiting and left-click to add a new card to your deck.

Explore the camp: you can view the letters and reports in the Royal tent, or talk with Reynard in the Mess Tent. There is also a Grey Rider who can show you the game statistics. And, finally, you can get some upgrades in the Workshop.

Tip: We recommend you to go to the Workshop, open Command Tent section and choose the first upgrade — Watchtower (-750 gold, -250 wood). Now you can exit the camp, open your map (‘’M’’ button) and even open some important locations (it will cost you 50 gold). These can be areas of interest, resources, treasures and so on.

Go right and interact with a shrine (a small house). This can increase the level of your army’s morale which can be low, neutral and high. Neutral moral has no impact on your cards while low morale lowers the strength of a unit, and the high morale increases the strength. After any battle, morale returns to neutral. 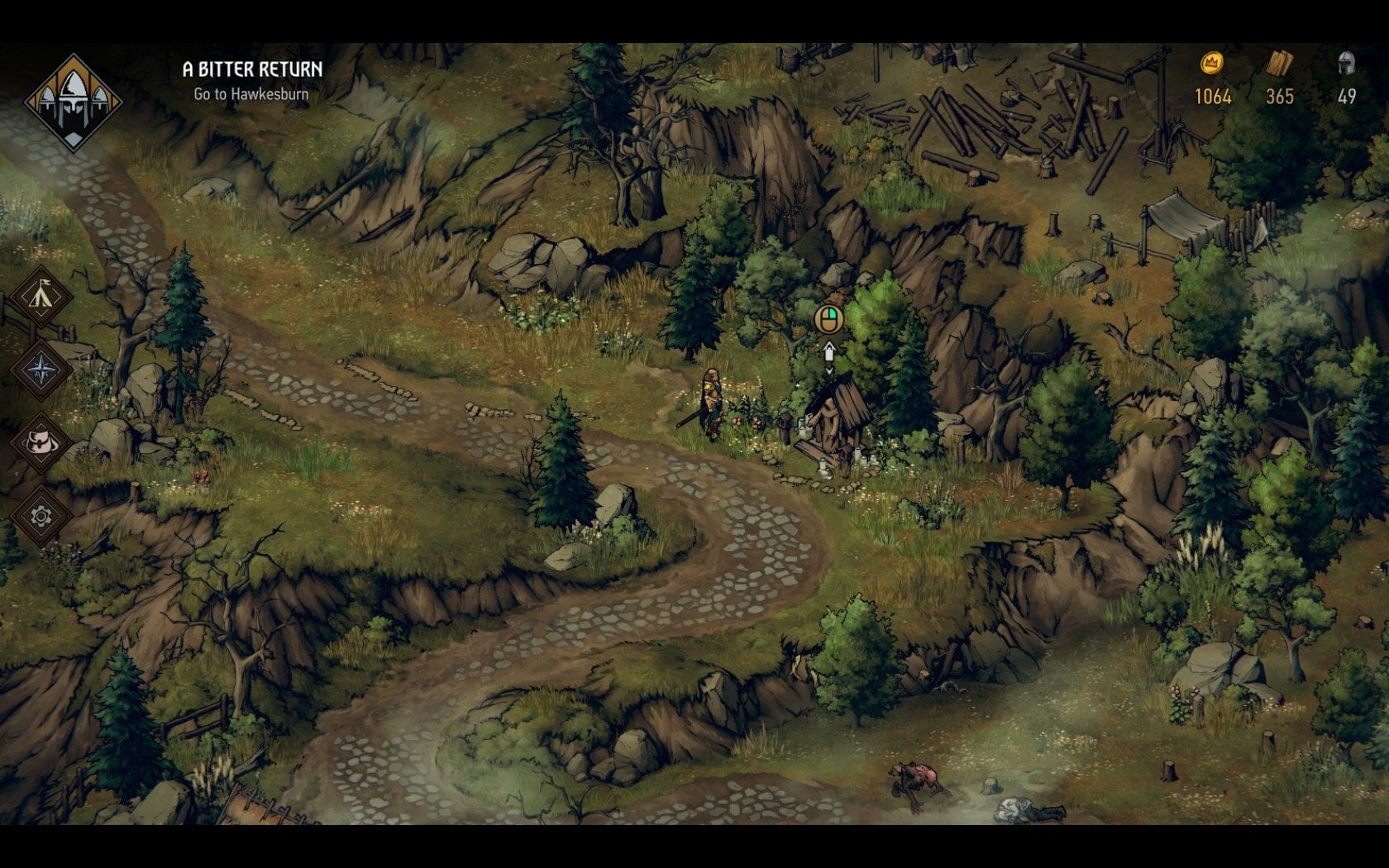 This time you’ll have a battle with the monsters. And you’ll get a new card — Banner which reduces Meve’s Cooldown by 1 when she uses her ability. You can replace this card later. You’ll also get a new row effect — a fog. By the way, there are a lot of such effects in the game. You’ll be having the Banner card during the whole battle. You’ll learn how to save your strength for the next round if a round isn’t going your way. Remember that losing one round is just losing one third of the whole battle. 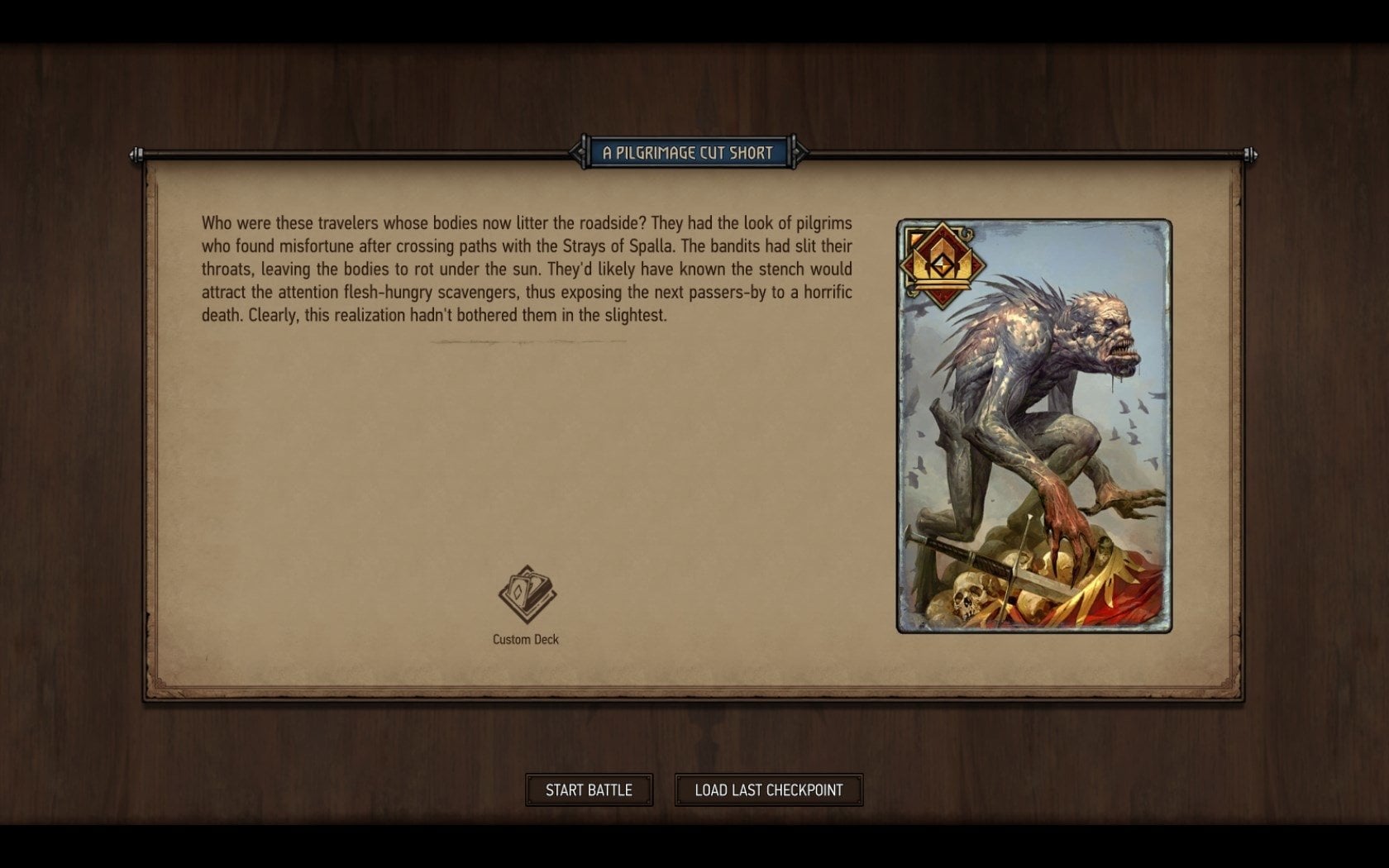 Soon you’ll get to Hawkesburn where you’ll find a signpost which unlocks the ability to fast travel. 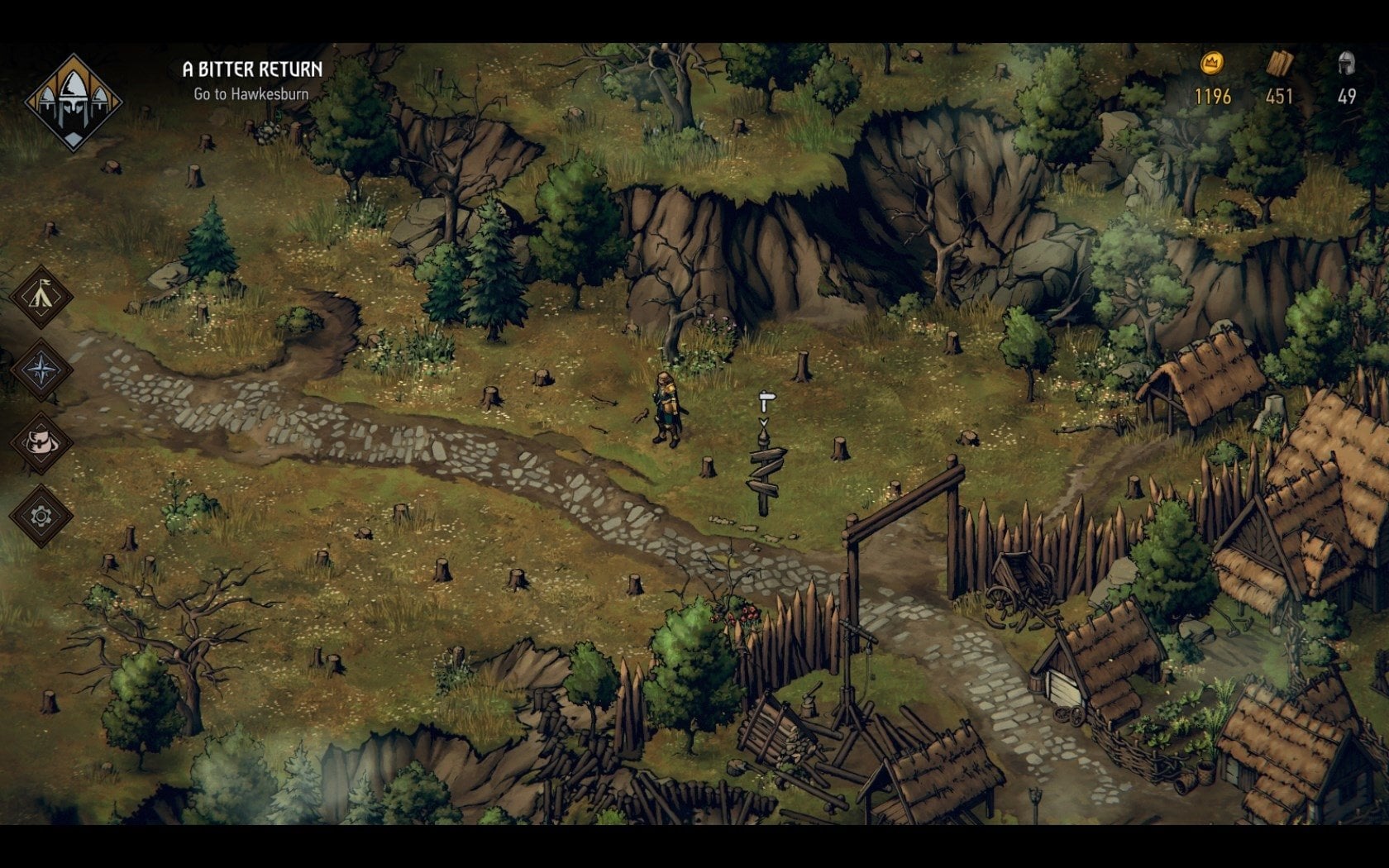