This guide tries to describe basics of Tropico 6. Most of the old players already new this things, but I hope it will be useful for newcomers.

Tropicans can effectively walk on foot in a circle with 9 squares radius (area of one metro station):

So on ideal flat map you can build a square districts of 20×20 size (or maybe 25×25). Place houses, grocery and church in the center; production buildings on the sides and not-so-visited buildings (like garbage dump or embassies) in the corners. During then World wars era centers of the districts may be connected with buses and since Cold War buses will be replaced with metro stations.

Alternative way is to build parkings and use “Right to wheels” edict.

Each tropican can use a small boat to get to the port another island.

There are few kinds of ports in Tropico:

Driving boat is faster than walking, so on some maps you can build districts on different islands and citizens will easily get there without buses.

The same currency is used for external trading and on the islands.

Everything produced on the island will be moved to the port (if it’s not required in some other building). By default everything that appears in the port when the ship arrives will be exported. You can disable this behavior by removing tick in the product list: 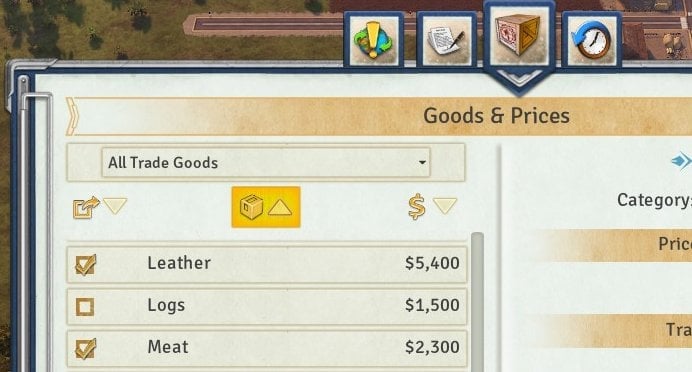 Here “Logs” are disabled from export. For this product port becomes a kind of warehouse where logs may stored and used.

Also there are trade contracts:

Reexport is possible: you can sign one contract for import below base price, and the goods will be exported giving you profit out of nothing.

Amount of products imported per one ship visit depends on era. Ship brings 500 units at one time in colonial era, 1000 units in WW etc.

There is no need to have more than one port (comparing to Tropico 5 where a few ports were required). But you can build additional ones if you want ships to appear more often.

There is one and only El Presidente (or La Presidenta) on the island.

El Presidente can give election speeches promising tropicans something

El Presidente can visit buildings; it costs some money and boosts building productivity. Also this mechanics is used in various quests.

You can build a “Ministry: building and appoint five ministers: foreign affairs, interior, education, economy and military. Each minister brings some kind of bonus, but the upkeep of the ministry is about $300 per month so make sure you can afford it.

Other government buildings include:

There are three levels of education:

Each building has a minimum required level of education for its workers. A person with higher education level can work on lower position but not vice versa.

Also there are five levels of wealth:

Wealth level for a person is calculated for whole family including children (see also “Child allowances” edict), so people with the same wage may be assigned to different levels. However usually a wage of $11-$25 makes tropican well-off and people with lower wages are poor.

Residential buildings have a minimum wealth requirement. For example, Apartment is for well-off people so poor and broken can’t live there.

Each person has following needs (happiness):

Every building has following parameters:

You can fire worker right-clicking his face in the building. Right click on empty icon closes vacancy (and all vacancies to the right) so the building will operate with reduced workforce.

Left click on empty vacancy asks to import worker with required education level from abroad. It costs money and this person will arrive on next ship. Also if there is not enough people on the island you can try to perform “Rescue” raid in Pirate Cove.

Also there are some terms related to production buildings:

Storage limits in the building can hint the consumption rate. For example:

And it looks close to consumption: one log per 2 planks, two sugar for one rum, 7-8 planks for one boat.

Production speed (efficiency) is different for different kinds of products. For example, boats have the highest price per 1000 units. But it will take a lot of time produce 1k boats and maybe you’ll get same amount of money with other products.

Teamsters deliver goods from one building to another (or to the port). There is no clear formula to determine how much teamsters you need. The best advice is to check output storage in few production buildings; if the store too much goods then you need additional teamster office.

Some buildings require electricity to operate. Just build some power plant and it will supply electricity to any building in some radius. You can extend the coverage with electrical substations if needed.

Tourists are similar to tropicans except they don’t have to work. They use transport in same way as tropicans and they have a wealth level for accessing entertainment buildings.

El Presidente has a personal Swiss Bank account; money related to this account are often referred as “S$”