A full walkthrough including pictures as well as a short version for the less patient ones.

Prologue – On the roof

As the game opens, you get to watch a short scene on a rooftop and have to pick your gender first. As far as I know this choice doesn’t have any impact on the story so feel free to choose whichever you like.

Afterwards you’re asked to enter your name. Do so. As above, this decision doesn’t really matter for the story at all.

Finally, you’re asked to tell your profession. Since this isn’t a RPG, this does not have any impact on your abilities but only influences the story slightly. Go with what sounds best to you. 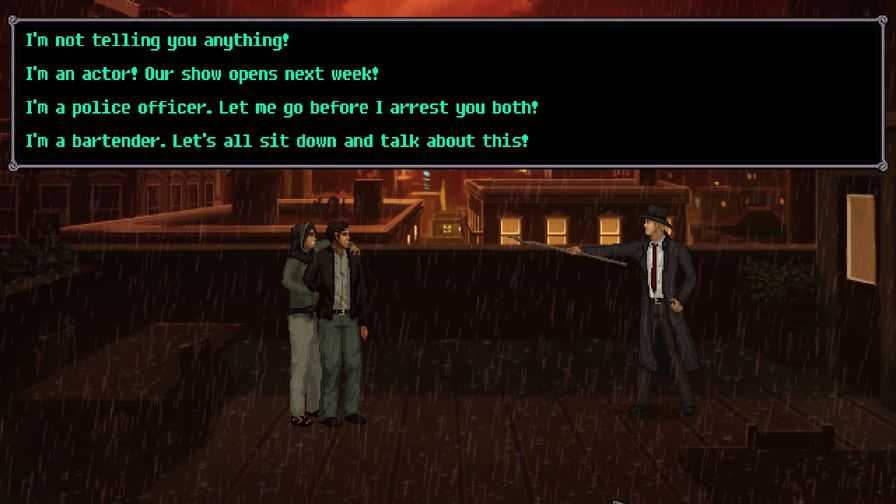 You find yourself in Brooklyn, one year ago and in front of the “Under the Bricks Theatre”.
In front of the building to find Serena, smoking. Talk to her to find out, that the play you both have been working on and that’s supposed to open one week from then is supposedly going through some mayor changes. 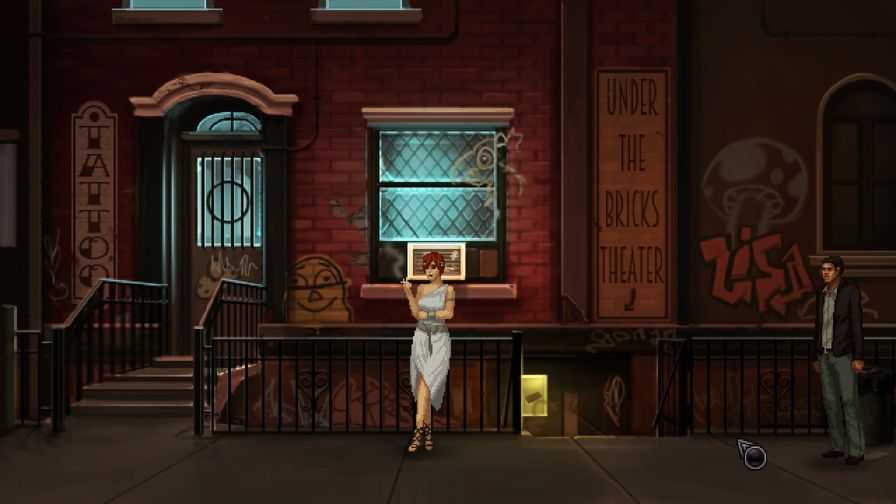 Enter the Theatre and find Morey sitting on one of the egg crates that are used as props. Talk to him to learn that Zack, writer of the play, has supposedly had some kind of meltdown and has started to rewrite the whole play. Tell him you’ll try to Talk to Zack and enter the office through the door to the right. 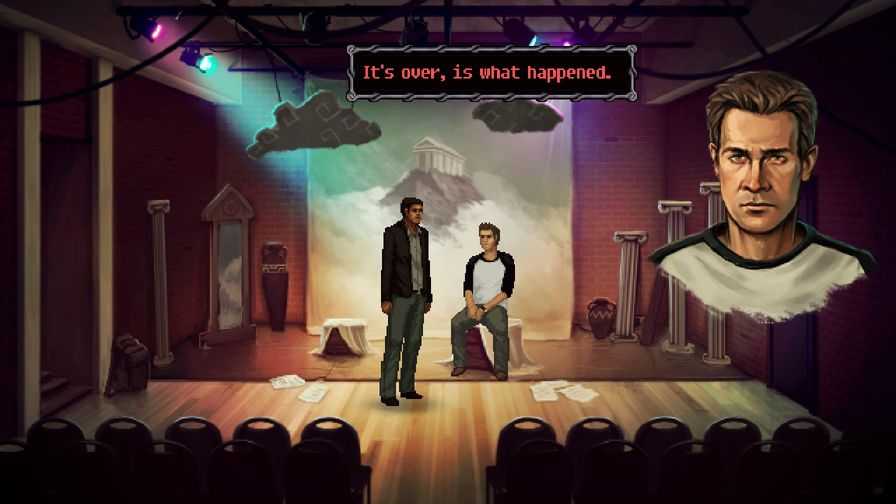 You find Zack typing frantically on his computer, obviously looking awful. Talk to him to get more information about him re-writing the play and notice, that he appears to be completely engrossed in his work. Not having left the office to shower or eat in a week, as Morey told you earlier.

Use the switch next to the door you entered through to turn on the light and notice a blonde woman sitting in the corner. Talk to her to find out she calls herself Calliope and is responsible for Zack’s sudden flash of inspiration. It doesn’t matter which options you choose, she will not leave the poor guy alone since he called her. You’ll have to do something. 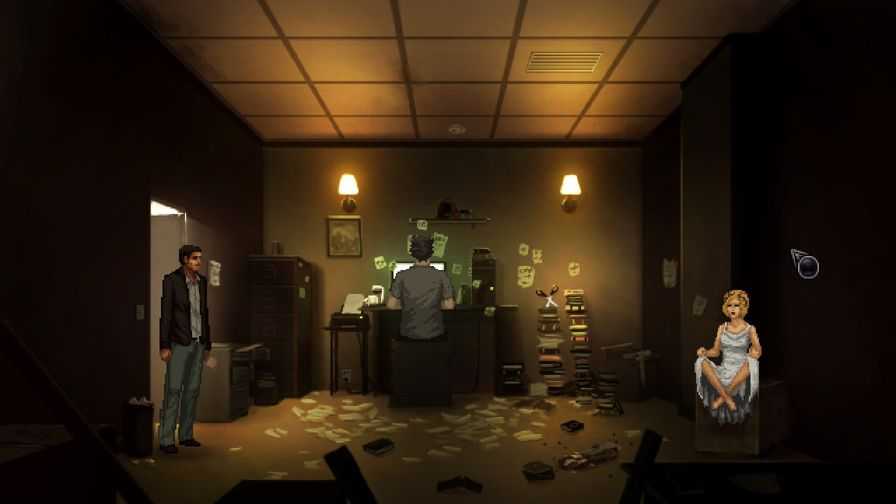 Try to unplug the computer next to Zack to find out he superglued the cord to the outlet. You’re going to need something more than bare hands for this. So pick up the pair of scissors stuck in the pile of books to Zack’s other side and just cut the cord.

In the scene that follows this action, everything gets slightly out of hand. There’s nothing you can do but watch the whole thing happen. Soon after you’ll be back on the roof in the present.

You find yourself on Staten Island in front of the Eternox nightclub, one year ago. Feel free to talk to your partner Vicky, who agrees to let you take the lead on this case for the first time.

Talk to the bouncer to get some more information and afterwards show him your badge to gain access and even more information. Notice how he praises officer Morino, who Vicky was suspicious about just now? 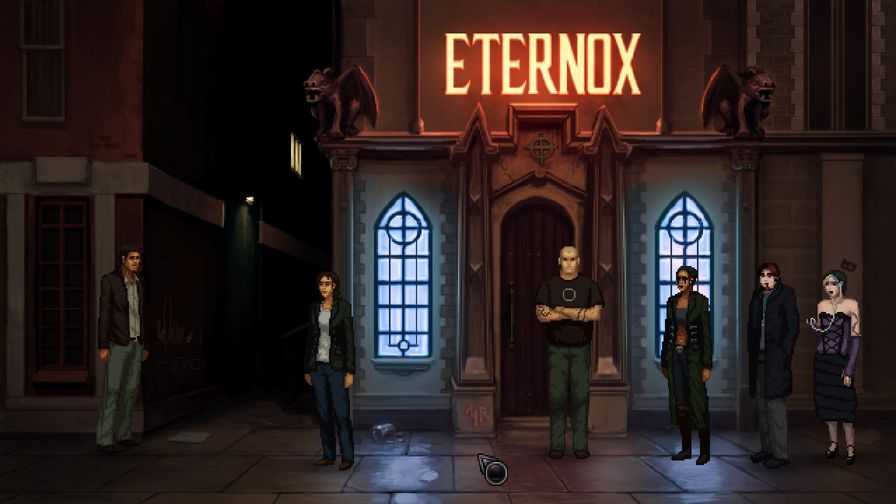 Enter the club and you get greated by Elana, the clubs owner. After a short talk you get to go upstairs and check out the situation while Vicky wants to ask Elana some more questions. Leave the scene by going up the stairs to the right of the screen and enter the VIP lounge. 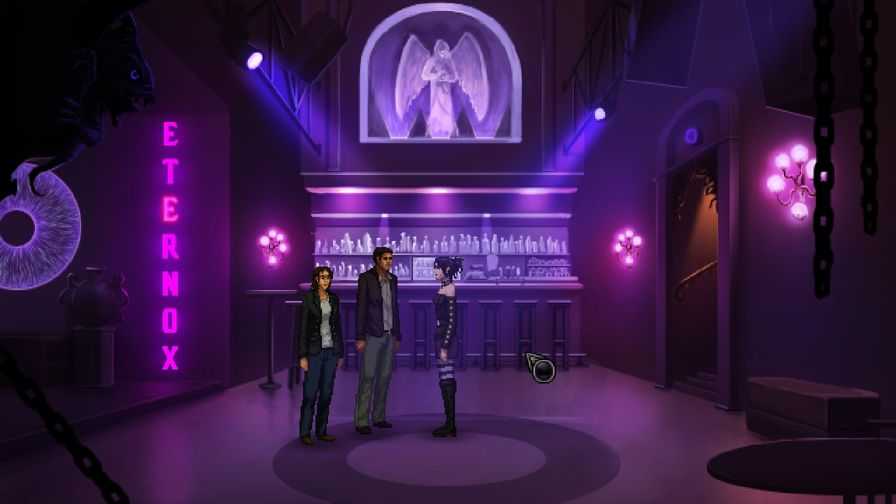 You see the famed officer Morino as well as the three suspects. The teenagers are handcuffed and appear to be confused about the whole situation. Talk to Morino and learn about the events that transpired, afterwards try to talk to the suspects but you will not get anything out of them. The only thing they keep talking about is Morinos heroic act being like “something out of a Bruce Lee movie”. 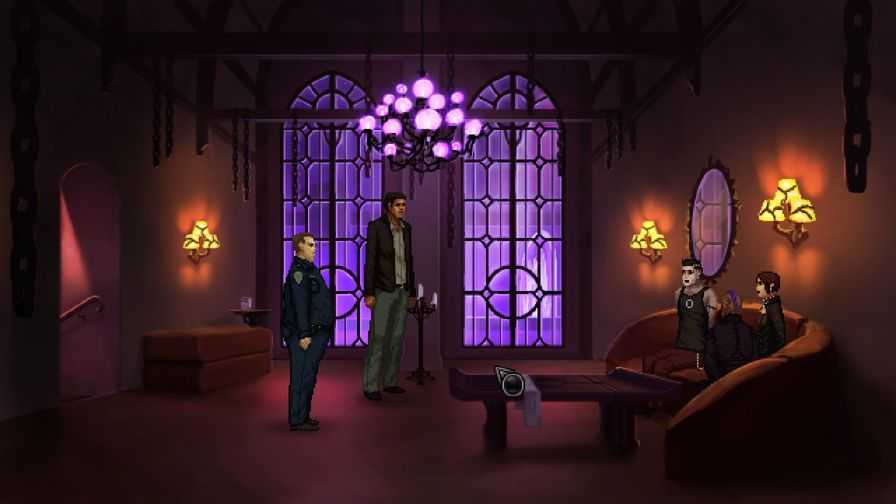 After you’ve talked to the kids as well as Morino, Vicky will enter the room and question the situation and officer Morino. You are free to chime in to either defend Morino or support Vicky. It doesn’t really matter.

In the scene that follows this action, everything gets slightly out of hand. There’s nothing you can do but watch the whole thing happen. Soon after you’ll be back on the roof in the present.

Take a look around if you want but there’s really nothing to see here. As soon as you try to enter the bar, a man will come out to you. You recognise him as Logan, a former regular, Logan asks about his brother Jonah and tells you, he’s supposed to pick him up inside but can’t quite muster the strange to enter since he’s been sober for four years. You will offer to get Jonah for him in any way, to enter the bar to do just that. 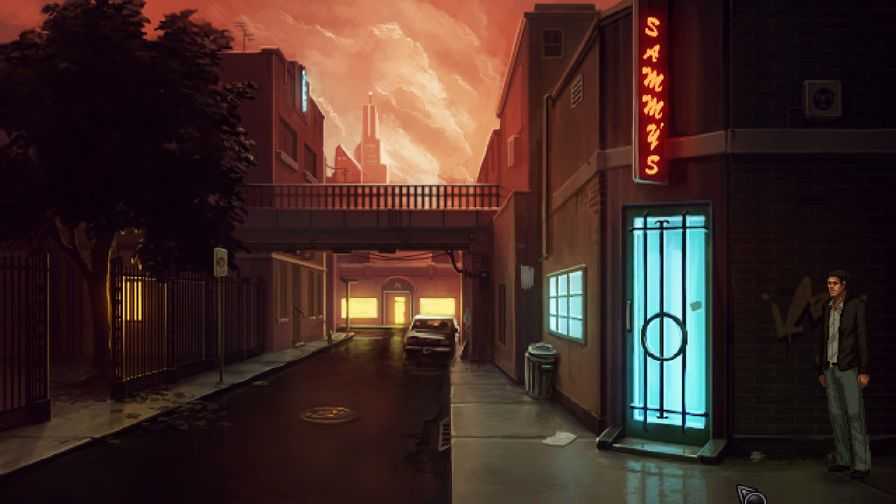 As soon as you enter you get into a conversation with Sammy, your boss and the bar`s owner about Jonah. You learn that he locked himself in the bathroom and won’t come out. Obviously this guy has had one to many to drink… 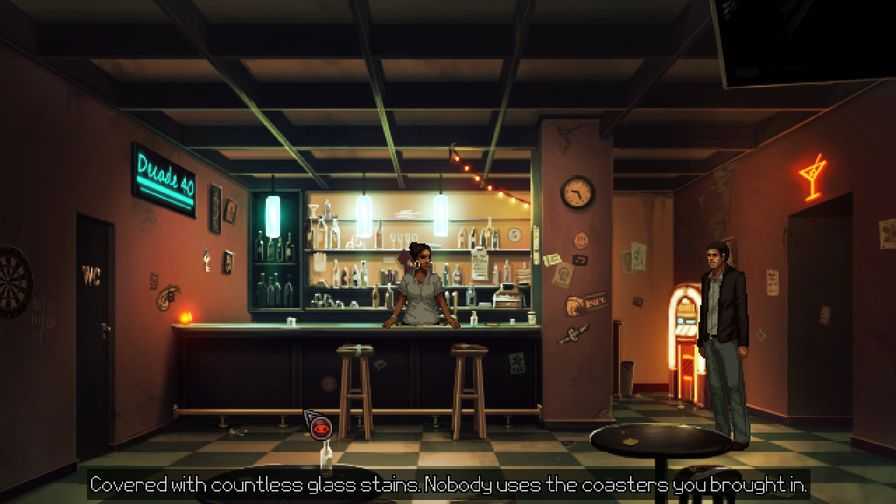 Try to enter the bathroom to realise that the door is locked. Talk to Jonah a bit if you want but whatever you say, he won’t come out. And he doesn’t make much sense as well.
Reach over the counter to grab the bathroom key from the wall, if Jonah’s not going to come out then we’ll have to go in! Unlock the door to find Jonah stand there, holding a gun to his head and threatening to kill himself. Notice the mirrors in the background and how the words “help him please” seem to appear and disappear randomly? Weird… 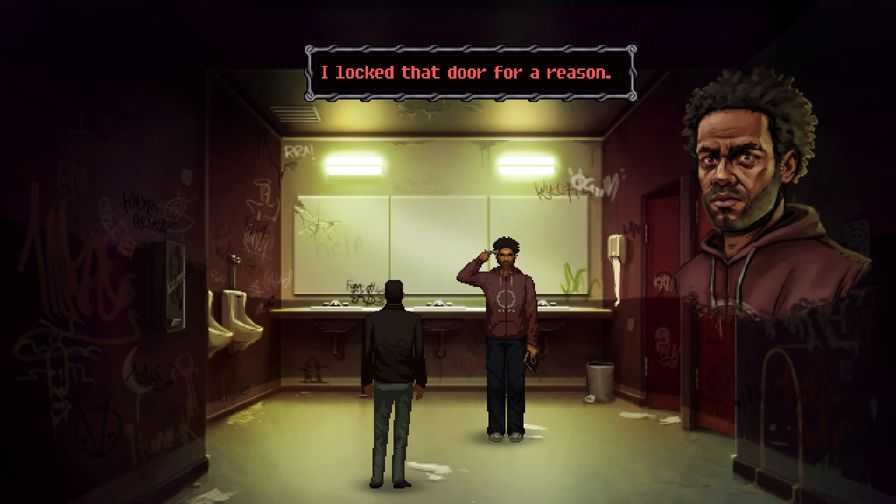 Do what the mirror tells you to do and talk Jonah out of committing suicide. Afterwards there’s not much more you can do but watch.In the scene that follows this action, everything gets slightly out of hand. Soon after you’ll be back on the roof in the present.

Prologue – Back on the roof 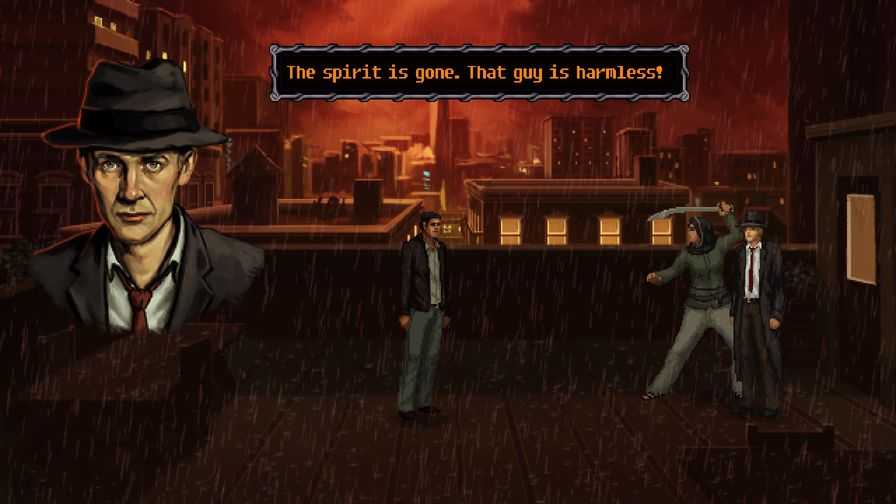 Click anywhere to get up and, after a brief talk with the woman who held you captive before, follow the two through the door and inside the building.

The next scene is quite gruesome but feel free to look around before talking to either the man in the coat or the woman with the sword for some more information on what transpired. You learn that you’ve been possessed and are responsible for the slaughter. Since there’s nothing more to do here, leave through the door on the left of the screen. 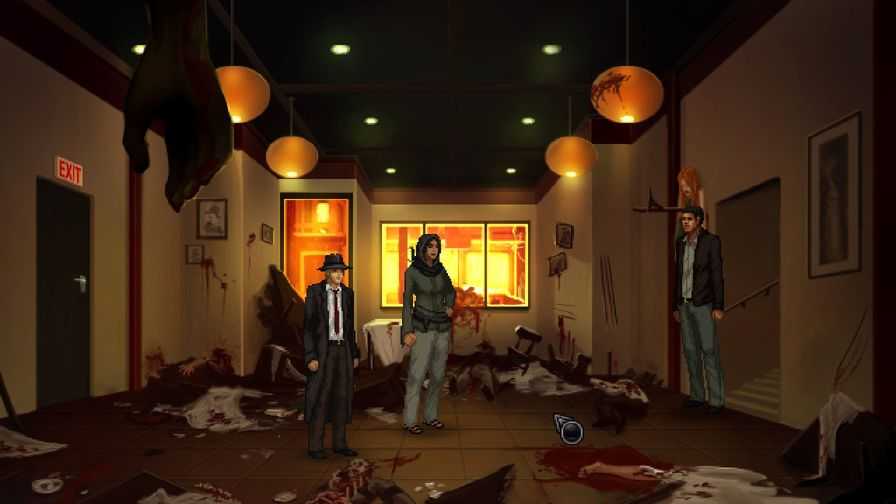 Once you’re outside you get tasked with finding something big or heavy to pry of the padlock on the door you want to leave through. So pick up the pipe next to the dumpster. 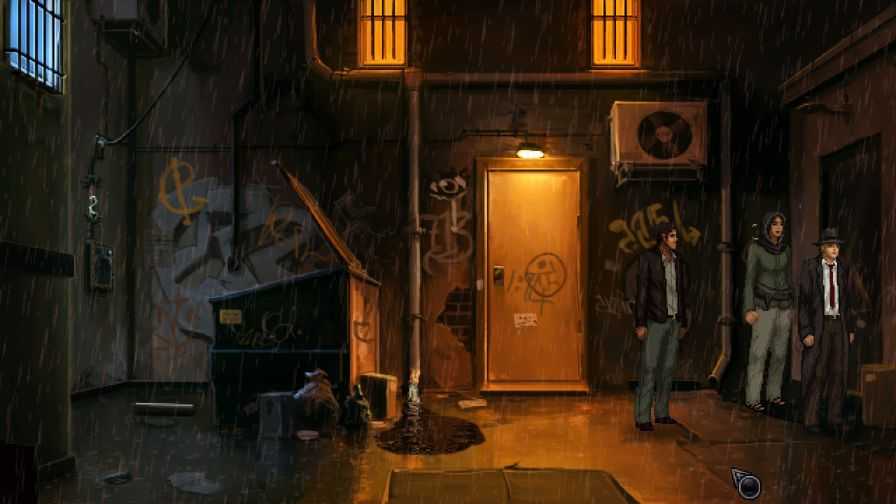 As soon as you do, a creature appears, claiming to have been invited. Since you know that your two companions are still weakened by the exorcism they performed for you; it’s up to you to save the day:

Check inside the dumpster and pick up the cloth and spool of copper wire inside. Then leave the close-up. 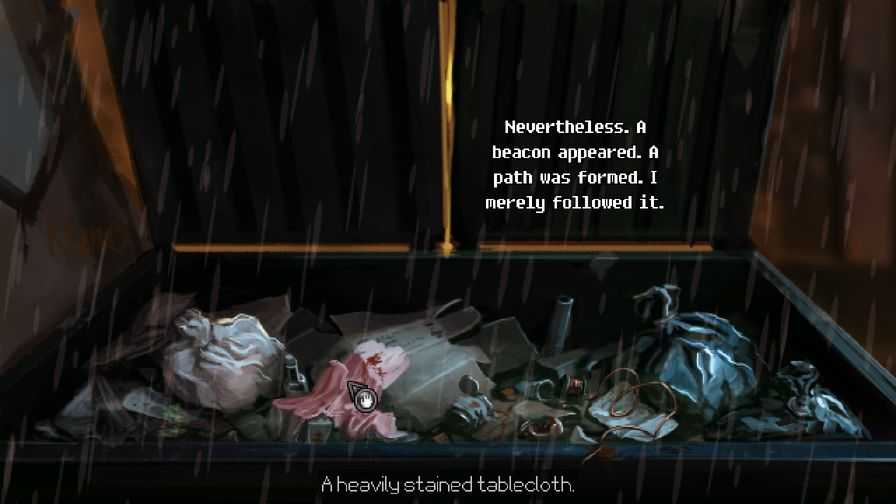 We’ll have to change that. Use the piece of cloth you found on the drainpipe to clog it and cause the water to flow out of the other pipe and the puddle to grow larger. Don’t worry, your character will automatically push the lever into an “off” position for all of this. After your trap is set, go back to the power box and turn it back “on”.

The creature is knocked down and after a short discussion, it falls to you to decide its fate. Kill it or let it feed on the corpses inside to get enough strength to travel back home? No matter what you decide, you are recruited as a member of the Unavowed.