This guide will help with some of the more difficult achievements with focus on difficult medals and CO-OP XP. Use this guide as a supplement to the excellent guides that already exist for Verdun, some of which may be linked in this guide.

Co-op – War is Better with Friends

You will need one friend who is willing to get to 250,000 XP with you. Most players may try to achieve this through public servers but that is time consuming and inefficient. Previously it has been suggested to let the machine gunner do most of the work as the XP is not cumulative in the game. My method relies more heavily on the NCO as ability cooldown is reduced significantly resulting in more XP gained in comparison to the machine gunner.

2. Press the chat button and type the following commands from the table one line at a time.

3. Set squad to Belgian (or any class with NCO gas ability). Have one player as NCO and the second as machine gunner (3rd position).

4. Stand close to each other and behind the trench, just far enough away from the bots’ artillery strikes. It is very important to stand near each other to gain XP.

6. Order continuous gas attacks as NCO (Command Order 2, press Q then 2). Fill the trench from one side of the map to the other. Try to also target bot spawn locations. 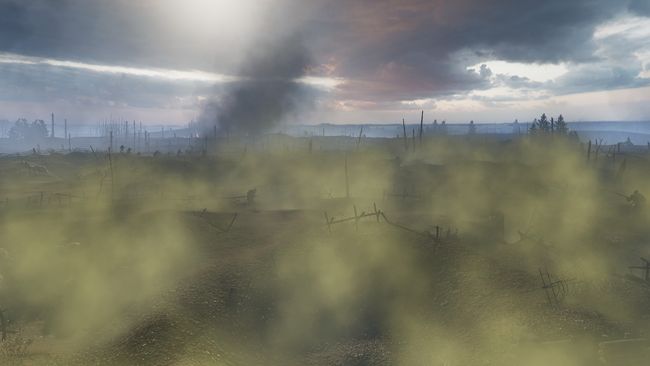 Make 5,000 Headshots
Since bots are relatively harmless in this setup, this is optimal for the machine gunner to set up close to a trench and one-tap idle enemies in the head to work on the 5,000 headshots achievement. Once you run out of bullets, suicide and repeat.

Final Notes
The more bots you can add the more XP you’ll be able to gain but keep in mind the strain on your PC and the game. The higher your XP the better your NCO ability is and the easier XP farming gets. For more information on these commands and their minimum or default values please refer to this guide. These commands only work in Frontlines, thus it cannot help with the Squad Defense grind.

Co-op – Play Together With the Same Friend

Buddy
Play together with the same friend 50 times

Comrade
Play together with the same friend 100 times

Blood Brother
Play together with the same friend 250 times

This is best accomplished in a private Squad Defense server. The co-op play count only increases at the end of the match. The next map cannot be the same as the current map. The benefit to this method is that one player can go AFK while the other enters the commands.

1. Host a private Squad Defense server and join with friend.

2. After the current map loads and during the match warm up timer, enter only one of the following commands and make sure the next map is not the same as current map.

3. Once the match starts type in /endmatch to end the match and wait for the next one to start.

See “CO-OP – War is Better with Friends” section of this guide for the most optimal server configuration to get these done.

See “CO-OP – War is Better with Friends” section of this guide for the most optimal server configuration to get these done.

Make sure to select a weapon with a knife attachment to speed up the melee kills. See “CO-OP – War is Better with Friends” section of this guide for the most optimal server configuration to get these done.

You’ll need 2 friends for this one. This medal is tricky to achieve in a public server. In the past, I’ve tried both the Creeping Barrage and Big Bertha abilities resulting in 7-12 kills without being awarded this medal. This was easily accomplished in an empty Front-line 32-man servers.

1. Join a public Front-line 32-man server.
2. Have 2 friends join the opposing team.
3. You’ll have to pick a class/officer that offers you a grenade of any kind.
4. Have both friends get close to you.
5. Look at the floor and cook the grenade by holding G until it explodes.
6. Complete the match to get the medal.

You’ll need a friend for this one. This works best in Front-line 32-man servers as there are no bots. Bots tend to die and then spawn more often on teammates thus taking this medal from you. Keep in mind that Verdun developers plan on removing this mode soon. This becomes an issue since you cannot get medals from private Front-line servers.

1. Join a public Front-line 32-man server
2. Have your friend become the NCO and have him spawn into the map.
3. Click on your NCO friend and spawn on him once.
4. Complete the match to get the medal.

Be sure that nobody else in the match has more spawns on NCO than you do and you’ll get this medal.

2. Pay attention to the radar at the start of each wave for enemy artillery or gas attacks.

3. Look for the white shield on the radar to learn where the enemy will attack from. Press M to see the whole map if you don’t see the shield.

4. Save your HQ artillery strikes until later waves and make sure you stock up on ammo whenever you can.

5. You won’t have to wait for each wave to start on its own, you can press F2 to get it going.

6. At wave 11, you’ll want to end the match as medals don’t stack in Squad Defense. Do this by typing /endmatch to save on time and xp instead of suiciding.

7. In the future if the medals do stack, it is still better to end the match at wave 11 since you’ll only face more enemies with each wave.

8. When you see the gold medal at the end of a match, type /restart to restart the game.1