Warhammer 40,000: Darktide – The Stub Revolver Guide. A small guide to the most misunderstood weapon in Darktide. 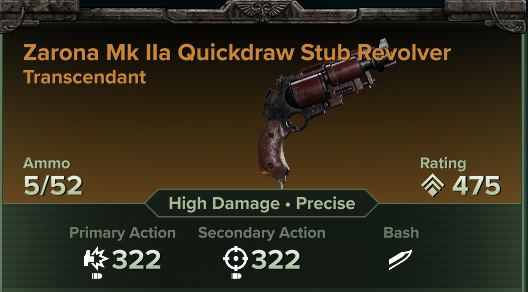 The Zarona Mk IIa Quickdraw Stub Revolver is an unpopular weapon in Darktide that has become wrongfully associated with beginning players. Even though there is no arguing that it isn’t a top tier pick on any class, it is one of the most surprising and consistent underdog weapons available.

If the Kantrael MG XII would be a 10/10 (which, in the current patch, it would be considering it is the most powerful all-rounder) the Stub Revolver would be sitting around a 7/10 in my opinion.

The Stub Revolver can be played on the Veteran and the Zealot, where the first appreciates it due to the high synergy with the Veteran’s feat tree and the second due to it being very fast. From my experience it is much better on the Veteran than it is on the Zealot. It can also be used on the Psyker… but please don’t.

The Revolver vs the world

The Stub Revolver has interesting stats that don’t quite paint a picture true to its nature. Below is a table of partially objective, partially subjective statistics (all are unmodified, i.e. stats at the 0% scaling baseline). All testing is done on Damnation difficulty, both in-game as well the Meatgrinder.

Some explanation for the subjective variables: TTK implies the ability to hit breakpoints on enemies. This is by far the most difficult variable to elaborate upon as it involves a lot of statistics. Generally speaking I will give weapons a big boost in this category if the weapon can one-tap enemies or shred them very quickly.

Combat flexibility refers to the situations in which you can properly use the weapon. Think of enemies at range, Carapace armored enemies etc. This does not incorporate the weapon’s inherent clunkiness (looking at you Boltgun).

Ammo economy refers to how hungry the weapon is when firing it. This includes adapting to the weapon’s playstyle; i.e. not shooting at poxwalkers randomly like a Flamer. Note that shooting at hordes might be totally viable for high-capacity weapons, which is included here as a negative factor, but positive in combat flexibility.

Reload time appears subjective, but it is actually objective. It is the average reload time without considering the amount of times you have to reload.

Stagger potential is largely objective; a combination of firing speed and the inherent stagger statistic associated with the weapon.

So why the Revolver?

When you put the Revolver next to the best weapons it should be fairly obvious its strengths lies elsewhere if not for the statistics. Somewhat comically the first thing people rightfully notice about the weapon is its very frequent need to reload (even if it’s not as slow as it might appear). Similar to the Boltgun this is the true drawback of the weapon; but why bother with a weapon that has a large inherent drawback on top of being statistically below average?

To understand this we first need to look at the modifiers: 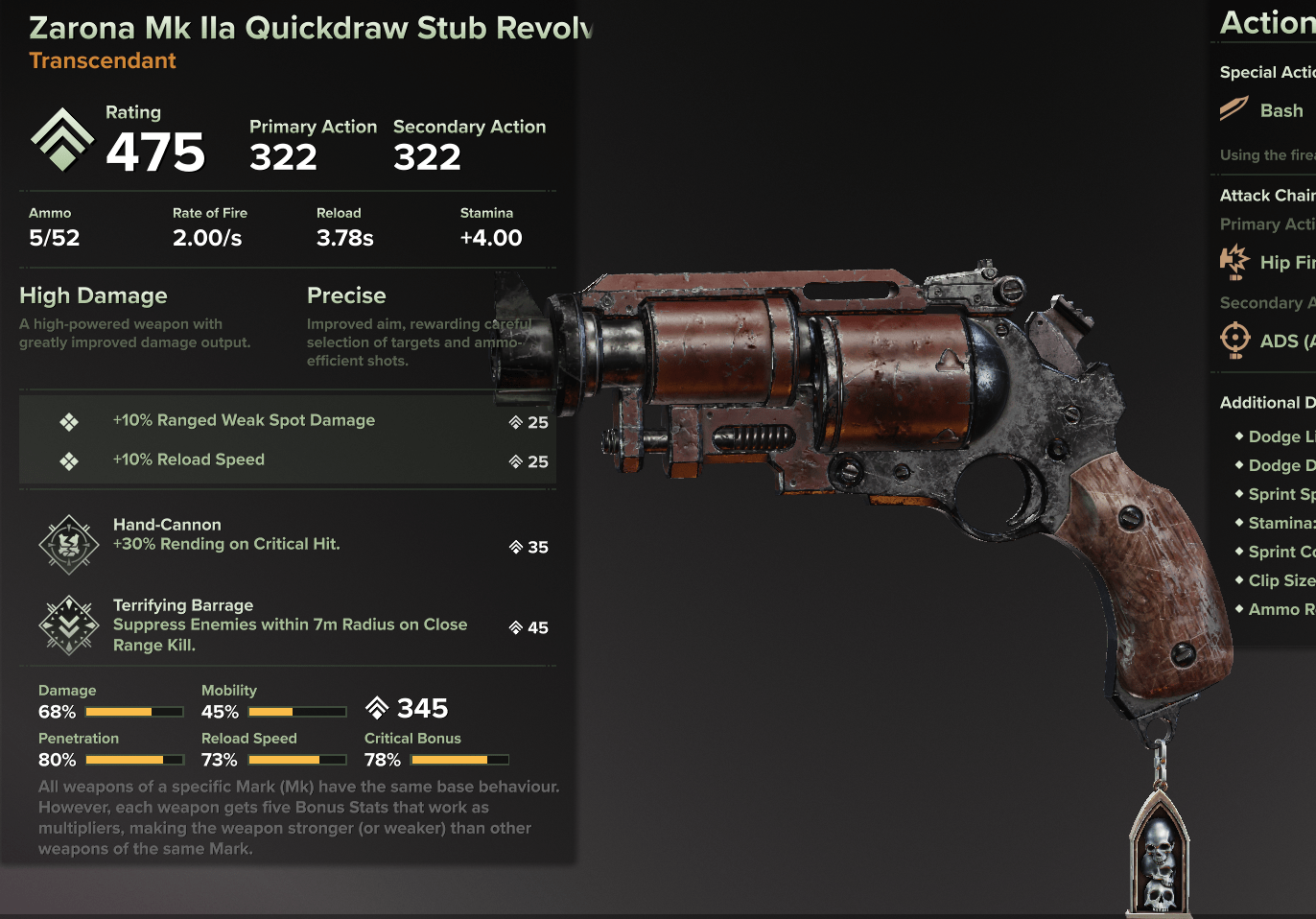 The Stub Revolver has some of the most impressive modifiers for the weapon simply because most weaknesses other weapons need to compensate for are already inherent to the Revolver. This includes Handling, Collateral, Stopping Power and to a degree Mobility (which is the most redundant stat on the Revolver for this very reason). The Revolver is pin-point accurate at any range, and almost entirely accurate (slight pitch, but no roll) when firing at max firing speed.

So rather than make up for shortcomings the Revolver keeps stacking on more damage and more flexibility as it scales. This can yield very impressive damage in the Meatgrinder, and offers the weapon to scale harder with modifiers than most other weapons (and the scaling ranges are already pretty good as they are). It is not unusual for the Revolver to put out 600-700 base damage in a single bullet at practically any range.

Combining this with the Veteran’s inherent 15% damage modifier, plus 25% headshot damage, plus the 50% innate damage modifier from their active ability can result in damage numbers between 800-1300. A lot of people will recognize we are now starting to hit breakpoints on a lot of Specialists, most notably the Gunners, Bombers and on a very good roll even Trappers.

Due to the high innate stagger the Stub Revolver is capable of knocking over opponents when hit in the head consistently. This includes heavier Specialists like the flamer variants and even the Reaper (which will be knocked on its ass after, on average, 3 hits to the head). This can help diffuse a bad situation.

Lastly the Stub Revolver has one of the highest penetration factors in the game (not the modifier!): it can shoot through as many as four enemies at once. Allowing the user to fairly consistently hit highlighted enemies well beyond the horde.

So when and how should I go full-gunslinger?

Assuming you are a Veteran player (as the weapon is used very differently, and in my opinion much less effectively on the Zealot) the Stub Revolver is a weapon that requires very precise aim and good ammo management. But, once you do get familiar with it prepare for some of the most bad-ass clutch plays your allies have ever seen (getting a “wtf that aim” has got to be one of the most satisfying comments to get).

The Stub Revolver is your pocket sniper-rifle, while offering a surprising amount of utility on top. For feats I would recommend the following: 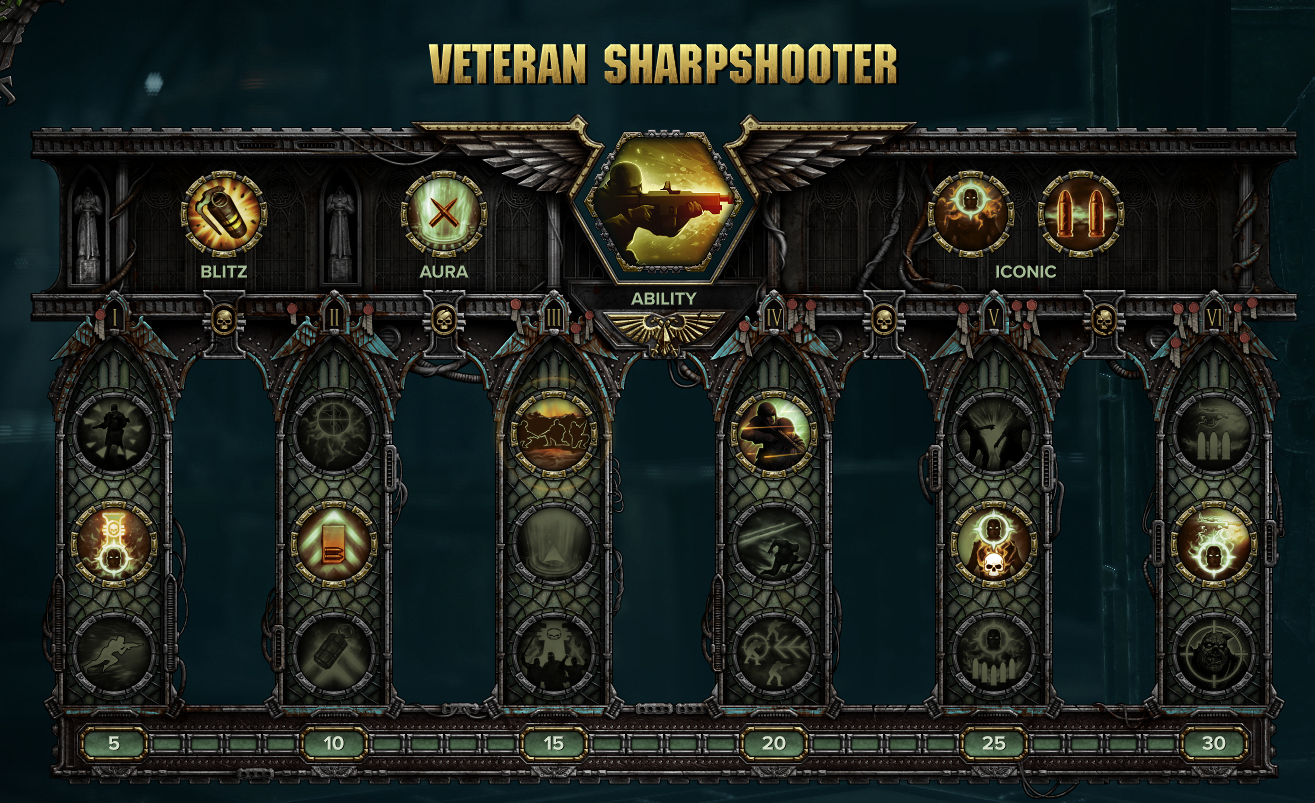 Most of which should be fairly self explanatory. I opt for Bio-Optic Targeting because it helps your fellow Veterans a lot (you will be glad others take it too when using the Revolver).

Some pointers to get you started: