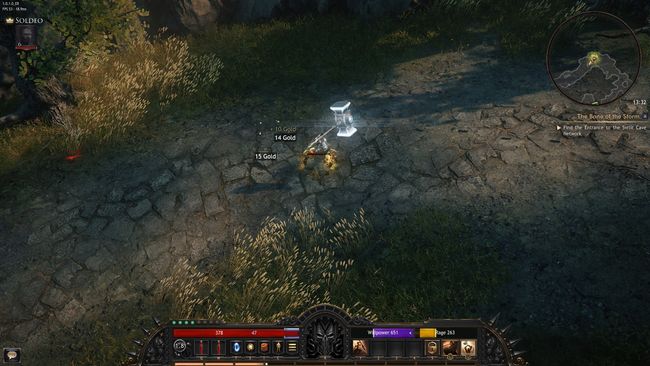 Other Wolcen Lords of Mayhem Guides:

In Wolcen: Lords of Mayhem, the game’s combat system revolves around Willpower and Rage. Players will notice two resource bars that are on top of the Active Skills. The purple bar is the Willpower while the yellow bar is the Rage, these two are required to execute your active skills, however, they are different from one another. In order to fill up the Rage bar, you can attack enemies by using your equipped weapon, except for Staves/Catalysts and by activating a skill that uses Willpower.

Using your Willpower resource will slowly fill up the Rage bar. On the other hand, building up the Willpower bar requires the player to attack enemies by using a Staff/Catalyst and spending the resources in the Rage bar will slowly convert or fill up the Willpower bar. Rage is required to activate attack-based skills, while Willpower is required to execute spell-based skills – depending on your skill modifiers, equipped gear, and unlocked passive skills, these factors modify the behavior of the Willpower and Rage such as its reduction, conversion, or regeneration rate.

On top of the Health/Force Shield bar, there are nodes that indicate the number of times you can dodge, this is the Stamina that is used to dodge. Players start off with four nodes, and eventually, as you progress through the game, it can be upgraded up to a maximum number of 8 nodes.

Basically, one node is equivalent to one dodge, depending on the situation in battle, you can spam the dodge button if you wish to do so until you’ve consumed all nodes, just be mindful that once it’s all out, you’ll have to wait for a couple of seconds while it passively regenerates. As mentioned, you’ll be able to unlock more nodes as you progress through the game, or change its effects, like to reduce its time to regenerate by equipping gear that grants buffs and/or effects for dodging – to dodge, press the [SPACE] bar.

Once players start the game, they’ll be given four slots for the Active Skills and eventually, as the player progresses through the game, two more slots can be unlocked which grants a total number of 6 Active Skills that can be equipped. The left mouse click, however, is permanently bound to execute basic attacks for whichever weapon the player has equipped, and again, as mentioned, basic attacks are used to generate either Willpower or Rage which is required to execute the Active Skills that are equipped.

If you need to return to Stormfall, you can use the Town Portal to travel back instead of opening your map and using a waypoint. Using a Town Portal will allow players to return back to the previous location, just make sure that you are in a safe spot and position since activating a Town Portal has a 4-5 second cast time. On the other hand, a Waypoint is considered a checkpoint that is usually found and unlocked for Fast Travel purposes. If you’ve unlocked a Waypoint, enter the World Map and click on the Waypoint you wish to go to and this will transport you to that location – using a Waypoint does not leave a portal.

Skills for Wolcen: Lords of Mayhem are divided into two categories, Active Skills are skills that are used in battle to inflict various damages, conjure spells, summon allies, and to grant temporary buffs and effects to you and your allies, Passive Skills, on the other hand, are skills that permanently adds various buffs to your character’s stats. For active skills, these skills can be used and will be based on the weapon that you have equipped, Active Skills are grouped into three different types:

Active Skills can be learned by using an Enneract, this can be obtained from looting defeated enemies, found inside chests, and can be bought from an NPC in Stormfall. Once you’ve used an Enneract that contains a skill, you’ll be able to learn and unlock it. Active Skills level up on their own by frequently using it in battle, and once it levels up, not only does its potency increase, but it also unlocks a Skill Modifier whenever you reach a certain level of the active skill.

Skill Modifiers are categorized as augmentations that grant different buffs and changes the effect or behavior of the skill, another important note to remember is that Skill Modifiers can be reset by turning off the selected modifier and it will give back the used modifier points. On the other hand, Passive Skills can be unlocked by spending your Skill Points that are obtained whenever your character levels up.

Passive Skills are unlocked in the Gates of Fate character interface and players are given the freedom to choose their desired path by using the rotating wheel mechanic. Passive Skills are grouped into three tiers and can unlock stronger passive skills as long as they meet certain prerequisites, this allows players to fully customize their character and to fit their desired playstyle. If you wish to reset your passive skill progression, you can simply do so by spending Primordial Affinity.

Apart from the freedom of building your character’s playstyle by choosing various Active and Passive Skills, the Aspects mechanic is that makes Wolcen: Lords of Mayhem different from other ARPGs. Aspects allow the player’s character to transform into an Apocalyptic Form which grants the character to manifest the form and skills of the chosen Primordial being.

At the end of chapter 1, you’ll be able to choose and unlock your first Aspect and as you progress throughout the game, more Aspects can be unlocked. Press [F] to open the Aspects interface to learn more about it or to unlock a new Aspect, this can be switched at any time. Players will need to collect Primordial Essence and fill the PE meter by killing enemies, once it is full, press [R] to transform, the meter will start to deplete over time when you use Aspect Abilities or when you take damage. When it’s fully depleted, you’ll transform back into your human form – just remember, use your Aspect wisely.