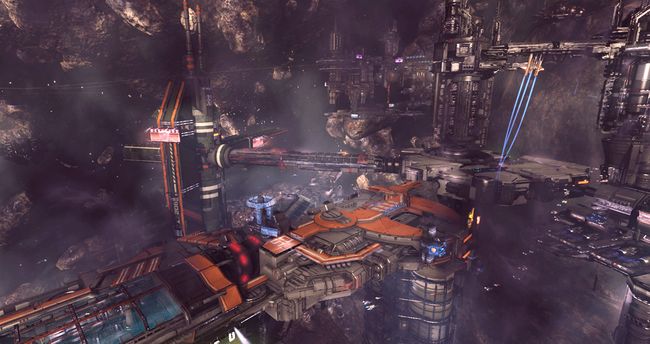 Where here is will be depending on your start. It also defines which ship you have.
I used the first start.

Do not go into a different ship! Many unsuspecting new captains have kidnapped by uninterested pilots.

F5 is quicksafe. You can manually save in different slots. You may want to use that.
So far the game is less buggy than many people thougt, but you never know.

To learn what to do, press H for the tutorials. You may not be able to do some of them right
now, but you can always stop and restart them. Their instructions are only shown on-screen, and not in the log (really Egosoft??)

Hire and Fire
One of the first things you should do it to hire a captain. Just in case you get kidnapped even after my warning, a captain allows your ship(s) to be commandered using the map.

To hire a captain, you have a tutorial. In short, talk to any running-around NPC and hire them. Right click on the ship you want to have them assigned to (must be on same station). Click again to accept your selection (Egosoft!) and then on the right side select the role -> captain. Congratz! You have a captain for your ship.

To fire personal you have to go to your ship’s details and right click > comms.
(Or talk of you stand in front of the NPC).

The guys running around on a station are as noobish as you are, possibly because they are the unemployed. But even a 0 star pilot can steer. Often in a station. In that case – if you ship is stuck – don’t try to fly manually, let your captain do it. He can fly out nealy as easily as in something.

You can find better (and more expensive) crews by docking on capital ships. You can’t see what you get though. New ships get (often with some stars) crews from the shipdock.

Docking
Many find this hard. You have to align the horizontal and vertical markers to match the docking place. With a bit of training that works quite easily (you may have to turn around sometimes). A docking computer makes that easier, the MK II solves that completly alone.

Outfit a Ship
On equipment stations (and I think wharfs and shipdocks too) you can repair and upgrade your ship using the ship menu after landing. There you also use consumables like satellites.

Station Trade
Stations don’t buy or sell (nearly) unlimited stuff. Instead they offer trades – a certain
amount to a certain price. Keep that in mind when getting your first big trade ship!

Also there are different types of cargo hold.

If you do the trade tutorial you will learn how to order your ships to trade manually.
You can assign autotrade by right clicking and choose the option. Make sure your cargo hold is empty! Autotraders do not sell stuff already in cargo hold. No room, no trade.

Credits due from trade are those that you get after a planned trade is finished.
Keep that switch for trade offers in mind!

If you hover a (colorcoded) text ion the trade screen, you can see the % under or above average price!

Mining
To mine esteroids can be quite profitable. Unfortunately there seems to be no way to make your miners mine AND sell at random stations. I think you can assign them to one of your stations (after you get one of course) later, to get resources.

To mine you need a ship with a mining laser. To see what an asteroid yields (if any) click
on it. You may(?) need to make a range scan first.

The Endless Space
X games are big. X4 is relativly small, but since two more races are planned in DLCs,
it should get quite some sectors more.

The shift+1 and shift+3 modes are your friends! 3 scans (hold R two seconds) for stations
and other big objects, 1 lets you fly faster.

Backspace is your friend! The complete stop brakes you way faster then just switching off
travel mode. Also a must-use in the spacesuit!

Spacesuit – Repair and Capture
Your spacesuit is very useful! You can go out of your ship in a spacesuit by using the
teleporter console of your ship when in space. Unfortunately that does not work on staions.
Why unfortunately? Your suit is equipped with a repair laser, that makes repairs possible.
After you buy a hand laser, you need to reassign the repair laser to a fire group.

Also, to capture a ship (where the pilot has left in a fight), you have to get out, make a
scan of the ship and decipher a signal. Then you can shift+d enter the ship.
You need a captain on your old ship or it will be helpless!

Assorted Tips
Backspace is your friend! Fast brake for ships and spacesuit!

Stuck in an asteroid or station? Let your captain pilot you out of it!

Need money? Go to a station’s trader (a building somewhere on the side, see crafting tutorial). Buy bandages, needles and sedatives. Use them to make Medkits. Buying price per Kit: 1K, sell price per kit: 10K. If a trader has all three, that is 100K fast profit. It’s nearly cheating!

Different races, different upgrades! Each race has ship equipement that is stronger than that of the other races. It might pay off to shop around.

Player-HQ and Other Spoilers
To get your Player-HQ, start the scanning tutorial. Find the signal (fly like you want to put
it on your window) and follow the instructions of the lunatic Boron.

How to Control Turrets?

M ships with turrets have a small panel with control modes at the top of your HUD.

How to Train Crew or Marines?

In short: Learning by doing. They all get better the longer they survive!

Marines improve their main boarding skill the most in actual boarding missions, while ordinary crew gets better in normal ship operations like trading. Surviving a fight can also improve the skills in many areas.

How to Land the Ship without a Docking Computer?

To land without a docking computer 4 parameters must be correct:

How to I Get More Missions?

Flying by stations you sometimes see mission icons appear on the radar. Then open the mission interface (shift M) to see the actual offer.

The alternative are secret missions offered through signals revealed with the SCAN MODE (Shift 2). These missions often pay better.

Another alternative are subscriptions: These give you many missions in a row, with little stories around them. To get to that point you have to get good standings with a faction first and follow their invitation.

How Do I Hack Stations Myself?

Exploring the universe, you may find parts which can be used to craft illegal hacking items:

If you have these items in your inventory, you can apply them to a security panel of a station. Panel are found in rooms like the engineering section. The hardest to hack security system is the “Turret Control Panel”, as it shuts down almost the entire defence systems of a station. ?To hack it, you will need a Security Slicer.

Most other panel can be hacked with the Security Decryption System.

Where Do I Get Licenses?

First get a good standing of at least level 10 with at least one of the factions of the
game. You can improve your standing with many ways: Playing missions, destroying smuggling drones, help the fight against a factions enemies or just trade with them. Once you reach level 10 you may get an invitation mission to visit the faction administrative. Talk with him and accept the honour to be promoted. This alone already may unlock some licenses. Others can be bought once your reputation allows it.