Interacting with a Ship Trader (usually found in Maintenance Bay and Fabrication modules or right-clicking on the Wharf/Shipyard station on the map) and selecting Buy Ship opens the Ship Builder UI.

In the image below you can see:

1. Choice of ship class, type, semi-random default loadouts, save option for loadouts, and view controls along the top-middle.

2. A menu on the far left with purchase options:

3. A shopping list of selected purchase options in the top-right.

4. Ship stats, based on selected purchase options in the bottom middle.

5. Info on your existing wallet balance and on missing components in the bottom-right. 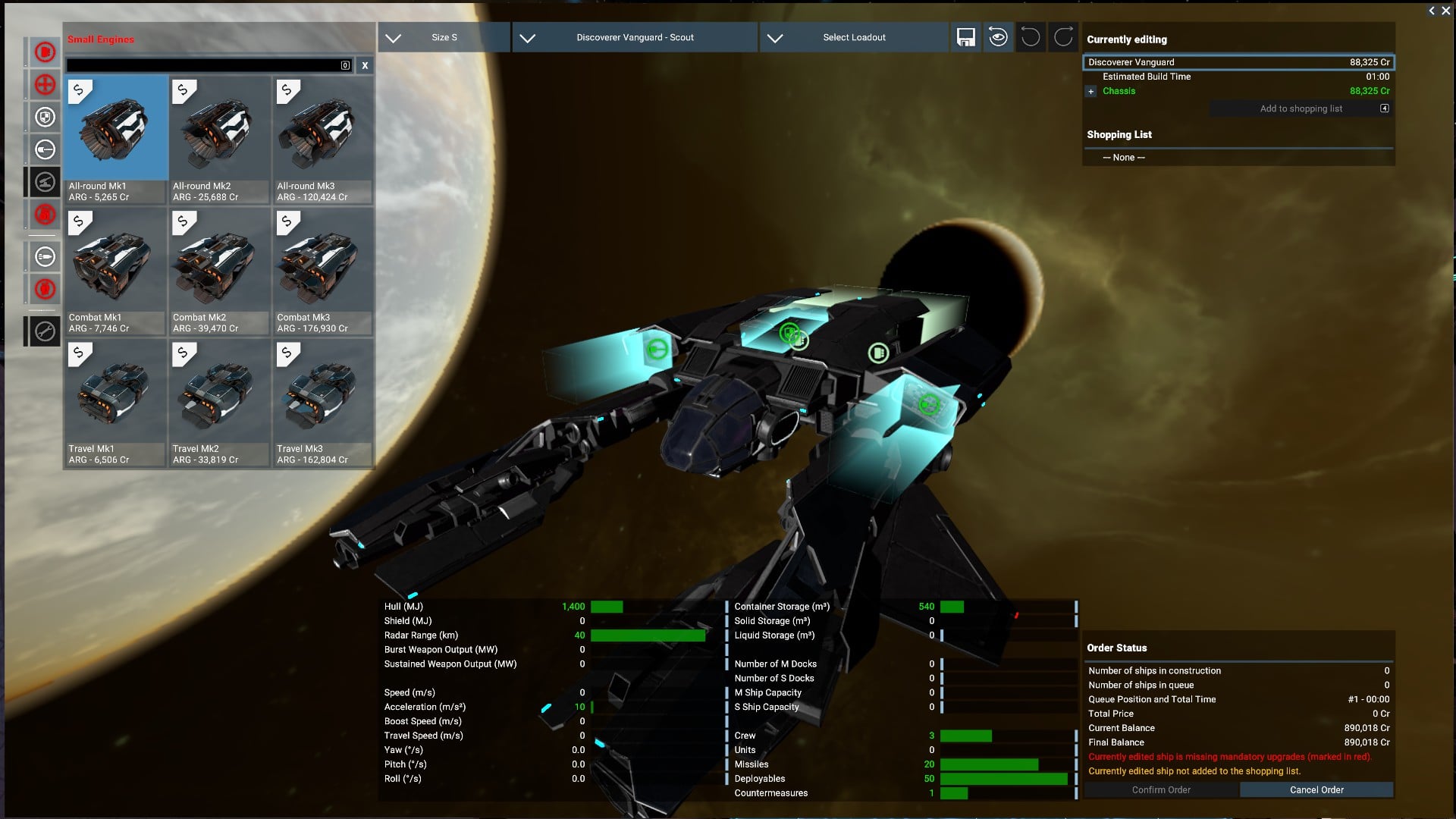 It is possible to determine what is equipped to a surface element by right clicking the surface element or selecting a piece of equipment in the upper left window. Software, Consumables and Crew can only be adjusted in the upper left window. Once happy with the ship design select Add to shopping list before adjusting the number of ships with that design to purchase and finally clicking Confirm Order. The ships will then be built over the next few minutes if the station has enough resources.

Certain ships require appropriate licences to be purchased. Wharfs, Shipyards and Equipment Docks can also upgrade or repair docked existing ships using the Upgrade/Repair docked ships option to enter the same Ship Builder UI. They can also be used to restock on consumables and hire additional crew for a fee. Just make sure that the station has enough resources or the player may be left without a ship for a time.

Main Guns and Gun Turrets (main weapons come in S and M variants, while Turrets come in M and L):

Some wares collected do not go into the storage of the flown ship but into a separate inventory for the avatar of the player. These wares are used for completing missions, special actions and crafting an assortment of tools to give the player an additional edge. The player inventory can be found under the Inventory tab of the Player Information menu.

Near Traders and Black Marketeers there is usually a Crafting Bench which can be interacted with open a crafting menu. Items to craft only appear once the player has collected one of the components for the recipe. Select a ware to craft and then click the Craft item button before selecting the number to craft with the slider which appears and then confirming by clicking the Craft Item button again. Some crafting components can only be obtained by performing specific tasks like mining or combat.

It is possible to further customise favourite ships by applying Ship Mods to them. To apply a Ship Mod requires the ship to be docked at a station and the player to interact with the panel in front of the landing pad to access the Redesign menu. The Redesign menu will show all available mods for the current ship allowing them to be applied or salvaged. Ship mods however need to first be crafted using a Workbench found near most Ship Dealers using designs which need to be unlocked.

Every ship has a limited capacity to host crew. Crew consists of 3 types of NPC:

On stations there are also

A skilled captain will unlock more maneuvers, fight and trade better and will unlock new options for the DEFAULT BEHAVIOUR of the ship.

Ship crew management is an essential part of improving your fleets abilities. The skill of Service Crew will also improve the rate of ship actions and the quality of steering, aiming, trading and fighting (Everything gets better with a good crew!) although their skills will not count as much as those of the captain/pilot. The sum quality of a ships crew is increased with the number of people and with the SKILL of each individual.

Every person you hire, whether through the shipyard or wharf “UPGRADE SHIP” interface or by hiring individual people on platforms, can be assigned to any of the three categories. This also means you can assign any marine or crew member to be a captain or manager.

The quality of people in your crew is grouped by skill sets. These skills are always shown with star ratings from 0 to 5 stars. If you open the detail view of an individual crew member, you will find that their total skill is made up from individual types of skills such as:

How good an NPC then performs in any duty depends on these skills. While a CAPTAIN’s overall performance depends mostly on PILOTING a marine depends more on his boarding strength.

All NPCs improve through their MORALE however.

Crew improve their skills though learning by doing. This they all get better the longer they survive.

Marines improve their main boarding skill the most in actual boarding missions, while ordinary crew gets better in normal ship operations like trading. Surviving a fight can also improve the skills in many areas.

Digital seminars may be found as loot and sold at/to Item Traders. At this time (v1.30), they are not able to train crew.