With a ship in hand the player is free to explore the universe and make a name for themselves. Ships can accelerate, brake turn, tilt and strafe with the speeds based on the type of ship and equipment used. When viewed from the cockpit the ship vitals, weapon systems and targeting markers can be seen.

Below the central reticle, three curved bars are located:

Three monitors provide info along the bottom of the screen:

To the right and left of the central reticle are the primary and secondary weapon groups, respectively (setup via the Ship interactions menu located via the chevron icon in the top-centre of the screen).

Available at the top-centre of the screen, immediately below the chevron icon. These settings are described on the Combat and boarding page. 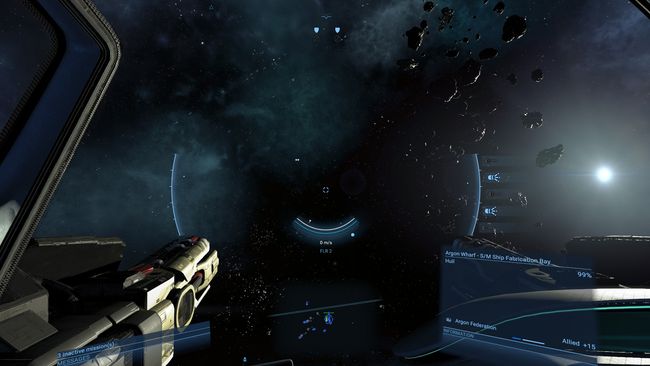 while from an external view the distance of objects close to the ship can be easily judged. Colliding with objects at a high speed will cause damage proportional to the speed which can be more than the shields of the ship can handle.

There are over 60 different types of ship in X4: Foundations and with the exception of drones and Xenon ships all can be flown by the player. Ships are classed into four size categories determining where and how many can dock at a docking module or ship hanger. Ships are also classified into specific roles determining the weapon and software options available.

Small ships are cheap and fast but fragile with only S weapon options making them useful for dangerous tasks like exploring unknown territory or for swarming larger ships,

Medium ships are the most common ship type covering a diverse range of economic and military roles.

Large ships are expensive and have limited docking options but are considerably more efficient than their smaller counterparts at mining, trading and combat.

Ships built to engage other ships and stations in combat and either destroy or capture them. Fight ships range from small agile Scout craft to large and heavily armed Destroyers. In general as fight ships progress in size through Scout>Interceptor>Fighter>Corvette>Destroyer roles there is an increase in shielding, fire power and cargo bay size but at the cost of being slower and more expensive to manufacture. Other combat ships like Frigates and Carriers specialise in transporting wings of smaller ships at high speeds to where they are needed while delivering modest supporting firepower. Bombers and Scavengers are specialised combat ships with a small profile which focus on missile support and piracy.

Ships with large cargo bays for shifting wares around the universe for profit, manufacture, construction work and to keep front lines supplied. Traders come in may sizes balancing speed with cargo space and armaments. Small Courier ships are fast, medium sized Transporter ships offer a good mix of mobility and cargo space while large Freighter ships are good for carrying wares in bulk.

Other ships include the player Space Suit, autonomous Drone craft used by larger ships and stations and NPC mass traffic Police Vehicle ships that scan for illegal cargo which are lightly armed.

The player ship can activate four different modes to aid in exploration and espionage. Modes can be activated/stopped directly via the hotkey or the Ship Interactions Menu. Other player owned ships and NPC ships will automatically activate Travel Mode when traveling long distances.

After a short delay the ship will accelerate to a higher speed enabling long distances of space to be rapidly traversed. While in Travel Mode steering is impaired. Loss of shielding will disable travel mode preventing it from being used to escape combat. Using Boost directly after coming out of Travel Mode can be used for a short burst of extremely high speed.

Colour-codes the modules and equipment of stations and ships when close enough. Getting really close to a station module passively obtain information about it. Similarly, getting close to a ship, right-clicking, and initiating an active scan will reveal info about the ship too. The amount of information gained being proportional to the type of scanner equipped (Basic Scanner < Police Scanner < Spacesuit Scanner < upgraded  Spacesuit Scanner). Audio Signals and Data Leaks are highlighted with red and able to be scanned passively.

Singularity Engine Time Accelerator – Accelerates the passage of time for everything relative to the player ship by 6-times. Makes long journeys seem shorter, allows for long trades and so on pass more quickly but also speeds up time for your competitors.