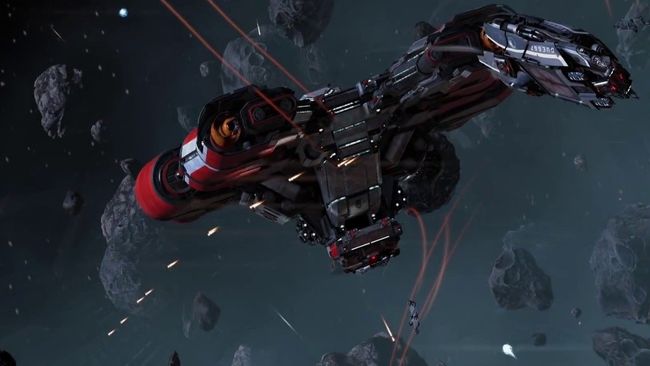 A guide covering how to do station building missions, what can go wrong building a station and what you can do to fix it.

Building stations can be both for increasing the size of your assets and net you a large amount of credits in the long run. The problem is that building a station is a fickle thing. If you don’t follow the steps correctly you can end up with a station being built but it not registering as being completed. That means you end up out of pocket forking out for a station that you most likely was not going to build without the mission being available.

So to try and help you make sure you don’t end up with failures, this guides going to try and cover the basics of building the station and even debugging it should you have a problem where it doesn’t finish.

You will notice in each section that it’s headed by the current version number (v1.32 at this time), there will likely be changes made to how station missions function in the future so as to try to bulletproof the guide for such changes I’ve included the version number with each segment rather than as an overall version number for the guide. I will keep it updated with each major update (or suggested update)

Information before you build (v1.32)

Place some satellites
It’s a good idea to place satellites around the Docks/Wharfs, Jumpgates, Upgrade stations and Trading stations. The reason for this isn’t just because of how it helps your ships trading but it’s essential for when you want to hire a builder ship to create a station. Zoom on the map limits the range you are searching in, so if you want to try and find a ship in multiple sectors… zoom out.

Factory or Defense currently is the same
Although the missions derive that a station is a Defence station or Factory, there is no difference between what triggers the station being classed as complete. You do not need a Factory module or an Administration module to complete the factory that is entirely on you in regards to how you want to develop your new station.

Racial differences aren’t necessary
Each Race has a different skin for station modules. Currently station building is not Race locked, e.g. you do not have to build a station made of Teladi modules for a Teladi station mission.

Storage type
Currently the missions appear to ask for Container storage. It’s easy for someone not paying attention to just see the word storage and then place the wrong storage type down. So make sure you don’t make that mistake or you’ll be racking your brain trying to work out why your station won’t complete and it’s simply down to the wrong storage type used. (It doesn’t matter if you use S, M or L storage to fullfill the job, it’s just the type that matters currently)

Number of Turrets
All station missions require turrets. If you don’t have any turrets in your station building blueprints then you’ll need to gain enough reputation with a faction to speak to their representative and a turret blueprint from them.

Shields
You could also add shields if you like, afterall it’s your station to do with however they currently aren’t necessary to complete the station building mission check.

Managers
The station doesn’t need a manager to complete the mission. Managers however are required when you start running the station as a factory.

Deliverying your own build materials
It’s possible to deliver your own materials, you just have to make sure you transfer them to the “Build Stores” which currently isn’t targettable but you can transfer with it using the station icon.

The station build missions are split into three stages and have requirements for the build itself.

The First stage: Go to the location
You are required to fly to the location where the (!) exclaimation marker (surrounded by a sphere) is for the station build mission. You have to be in the ship (you don’t have to be piloting it, but you have to be within 5km of the markers point.) The objective will then change to just an (!) exclaimation marker which is best to place the centre of your plot on.

If you don’t trigger this first stage then the station checks will not progress and you’ll see this stage still highlighted in the mission objectives.

The Second Stage: Create the plot
In the station requirements there will be dimensions for the plot. This are the minimum dimensions the plot is required to be, you can go bigger however it will cost to License the plot (unless you intend to offend which ever faction is currrently in control of the sector)

Place the plot on the exclaimation mark and license the plot to cause the stage check to be complete.

Third Stage: Build the station
This requires you to have taken into consideration the requirements for the station.

How much storage (Container Storage) space do they require? How many turrets is it asking for?

You’ll need to place a Dock (it can be a basic one for S/M craft) with the container storage being the same or greater value than you need. you also need to make sure you add at least the number of turrets you require to the storage (or other modules)

You then need to hire or use a builder you own to build the station and add enough funds to the build account to cover the costs of materials.

…Endlessly waiting
Once you’ve started the build you’ll have to wait until the station is completed which can feel like it will take an eternity. During the build don’t add any more modules or adjust any turrets etc as doing so can cause the last build phase check to not correctly be completed which will mean although the station gets built, the mission won’t finish in which case you’ll have to go through the debugging.

Mission complete
If all has gone well, you should have a nice new basic station setup and credits deposited to your account. You can now add more modules to your station and a manager to get it to do something of use for your empire, rather than just being an expensive space marker.

If your mission hasn’t completed correctly, it’s time to debug… :/ (continue down to find out how to work out how to get it back on track for completion)

Check the objectives, which stage is the station currently failing on? (please check these stages in the right order otherwise it will cause the checks to fail)

Failures at Stage One
You likely didn’t visit (personally) the place in space that the station is suppose to go. So you’ll need to fly over there and visit it. (As mentioned you’ll need to get under 5km from the markers position or centre of your station if you’ve built it there)

Failures at Stage Two
If you have a plot placed, then you’ve likely caused a previous check to fail and corrected it and now it needs this check to be fixed. To do that all you have to do is add 1km to one of the plots axis and purchased the additional plot license for it. Since the plot is now larger than the minimum amount required it will redo the plot check.

Otherwise just double check that your plots size is sufficient.

Failures at Stage Three
It’s possible there is not enough delivered materials to continue the build. A ship doing the delivery might have been destroyed or dropped their wares, or the price changed and it’s cost more for materials which in turn means you need to adjust the budget. This should be noticable however by a module not being 100% complete. In most cases as long as you have excess funds applied to the build, it should sort itself out.

If you haven’t applied enough container storage or the right type of storage, then you’ll have to add another module or change the module to a container one.

If you didn’t apply all the turrets together or altered them midbuild. (It doesn’t like it when you alter the turrets mid build) you actually require moving a module (or the whole station). What this means is go into the build window and you can either drag drop your station by it’s first module placement to a different point within the plot or you can remove modules and replace their position. Just make sure when you move it that you reassign building all the turrets again.)

This will make sure that all the turret modules are built together and should complete the check. (You shouldn’t need any more materials or extra costs other than just having a replacement builder do the module move for you)

The Turrets are the last thing to be built (after all modules), it’s a good idea to be out of the system when they build otherwise they might not materialise correctly which will then cause the check to fail.

Managers
Although they aren’t required for the mission completion, Managers can be a little buggy. Here’s some points you might want to consider.

Managers only require the station to have a docking module, they don’t (usually) require a habitat. When you assign a ships captain/pilot, servicecrew or marine as a manager they will take time leaving your ship to get to the managers office.

It’s a good idea to actually be on the ship or the station dock itself when you order them to become a manager. This will physically depict them getting out of the ship, walking across the dock and eventually to an elevator. They will then proceed to the managers office and sit down in the managers chair.

If you disrupt this by jumping out the system, flying off or modifying the station during their transition, then there is a likelihood they won’t reach the managers chair and might even disappear from being rendered making it impossible to manage the station. (In such cases it will stop a replacement being assigned)