A collection of info on how to unpack most of the game’s files, edit the contents, and insert it back into the game. Not exactly a tutorial, more of an info-dump like the title says.

This guide is a collection of known info on how to modify certain aspects of the game and how to unpack its files, among other things.

It’s not exactly a 100% complete tutorial, but it will hopefully help get you started on figuring out how to mod the game.

This won’t cover any tweaks like the hidden config options, nor will it cover save editing.
I’ll provide links and brief explanations on necessary tools, but it will not be a step-by-step tutorial as explained already. The majority of these tools will come with readme files and other documentation that you can refer to.

Not everything has been figured out yet, so you can expect to see updates to this guide in the future (hopefully).

I shouldn’t need to tell you this, but BACKUP YOUR FILES. I don’t take responsibility if you break your game, corrupt your save files, or lose your configs.

You can find your save files and configs here:

First off, model swapping. This is one of the easiest aspects of the game to modify, as it simply requires copy and pasting.

Navigate to \Yakuza 0\media\data\chara\w64, and there you will see multiple folders.

Inside these will be more folders pertaining to each model, and for the most part are self explanatory except for two:

adv (Gameplay models), used in adventure/battles and some in-game cutscenes
auth (Cutscene models), used in the major cinematics and some in-game cutscenes
Before anything, I should point out that not all auth models will work in adventure and vice versa. Some people get crashes with certain models. Also, some different kinds of models (like female models or animals) won’t work nicely when replacing another model of a different type. There’s a lot of trial and error.

Go into a folder in adv\auth and it’ll usually look like this. (this is kiryu_d_no_daimon, his rookie model before he gets his new real estate suit.)

While you can swap faces, the “mesh.par” is the most important part here. Copy this mesh file, and paste it into another model folder with the same file. Choose to replace it when prompted. You’re done!

So for example if you wanted to replace rookie Kiryu’s adventure model with Bob’s model, go into adv \c_cm_BOB, copy the mesh file, then go to c_cm_kiryu_d_no_daimon and paste Bob’s mesh in there. That Kiryu model should now look like this: 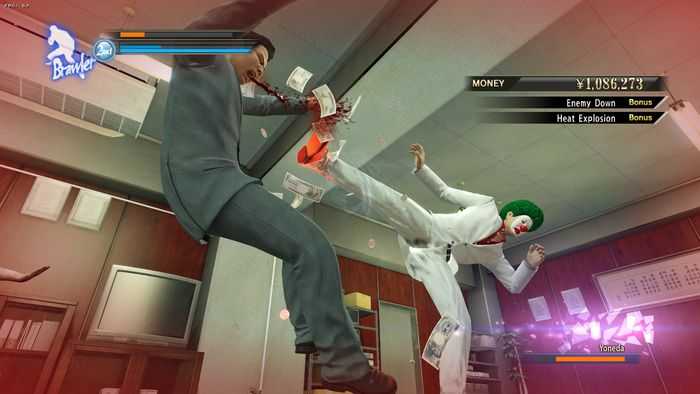 As a side note, Yakuza Kiwami and Ishin (mostly) assets are compatible here. If you have the upcoming port of Kiwami or the PS4 versions of both games, you can replace the mesh files in the same way for any of those games. 5 models have serious rigging issues and the other games tend to crash. Ishin models so far only work in cutscenes, attempts to use them in-game just crash.

A majority of Yakuza 0’s assets are packaged in .par files. To unpack these and poke around at what’s inside, you’ll need either:

https://aluigi.altervista.org/quickbms.htm (CTRL+F search on the page to find the plugin)

Run the program after downloading both it and the plugin.
Select the plugin, then the PAR file you wish to extract from, and finally the folder it will output the files to.

To use Gibbed.Yakuza0: (copied from drogean3 on the /r/yakuzagames subreddit)
Extract to a folder somewhere and COPY the .PAR you want to extract to the same one.
Run a command prompt window and do “Gibbed.Yakuza0.Unpack.exe <parfilename.PAR>”.
It will then create a folder with all the extracted files in that same location.

Now that you’ve messed around with the contents, you’ll want to insert your edits for use in the game. To do this, you’ll need:

The github page’s README contains all the info you need on how to use it.
Once done, simply paste your edited PAR over the original and replace it.

Yakuza 0 stores some of its audio in CPK files, located in \Yakuza 0\media\data\soundcpk.

To unpack any of the two files (bgm and se), you will need this tool:

It’s a command line app, refer to the README for more information.

Repacking requires CriPackedFileMaker which is licensed software and cannot be distributed for free.

Yakuza 0 stores its few pre-rendered videos in USM format. Use VGMToolBox to demux the video (take apart its individual components, like audio and video tracks), and Scaleform encoder to make a new USM video.

Scaleform is licensed software and cannot be distributed for free. However it’s apparently no longer being sold as of July 2017… go figure.

Yakuza 0’s text and scripts are scattered across numerous files, almost all of which can be edited using any decent hex editor.

File types I’ve found are BIN_x, DAT, and MSG. There’s probably some more which will be added eventually.

In this example I’ll be editing explanation_main_scenario.bin_c, which is contained in \Yakuza 0\media\data\bootpar\boot.par (refer elsewhere in the guide on how to edit PAR files).

If you don’t have a hex editor, I’m using HxD which can be downloaded here:

Use your hex editor to search and edit lines in whatever file you have open.

I haven’t really tested this thoroughly, so I don’t know if writing larger or shorter text will mess anything up. Just make sure you don’t delete anything you’re not supposed to.

Here’s an example of a pause menu/idle explanation being edited to put something super dumb in it:

Most of the game’s textures are .dds files, which can be easily edited. drogean3 on reddit made a great guide for this, so I’ll just link that here.

Photoshop or GIMP with a DDS plugin will be required, or any other DDS related tools.

Straight from their website:
“ReShade is an advanced, fully generic post-processing injector for games and video software developed by crosire. Imagine your favorite game with ambient occlusion, real depth of field effects, color correction and more … ReShade exposes an automated and generic way to access both frame color and depth information and all the tools to make it happen.”

Basically, it’s a shader injector you can use the change the way the game looks.