Zombotron is the sequel of the popular flash game with the same name. With more levels, enemies, weapons and mechanics, there is still one thing that never changed. Secrets. In the original game, secrets spelled the difference between having an easy time and fighting to the bitter end. This remake is maybe even harder.

Most secrets are in very specific locations that even the most clueless player can recognize by the end of the game. Namely, the air vents and behind the destrucible walls. Some even are unveiled by the enemies that destroy the right element. But a few can be permanently locked from you if you made one crucial mistake. Meaning that either you discard it or you have to restart the entire level. This guide is designed to not loose out anything, just because you decided to destroy a specific crate without knowing that the later was especially important.

For more ease to browse the entire guide, levels will be displayed by sections of the game. Each section will have its final map where the boss is located, meaning that Level 1 – Boss will have the Feral Zombie while Level 2 – Boss will have Spiderma… the Giant Spider.

This level is the one at the beginning of the game. You leave your spaceship like Samus, nearly naked and with just a pitiful gun. There is no enemy, but be warned to not die because of your jumps.

Edit : No secrets were discovered, and unfortunately, because I didn’t find it doesn’t mean there isn’t one. Comment if you find one in this section.

Here we are, your very first enemies. Remember, always aim at the end. As for the secret it is near the middle of the level. You will fall dawn and end up at an intersection with two choices. To the left or to the right where a spike trap is placed. A tall zombie will charge at you, just kill him and keep climbing to the right. 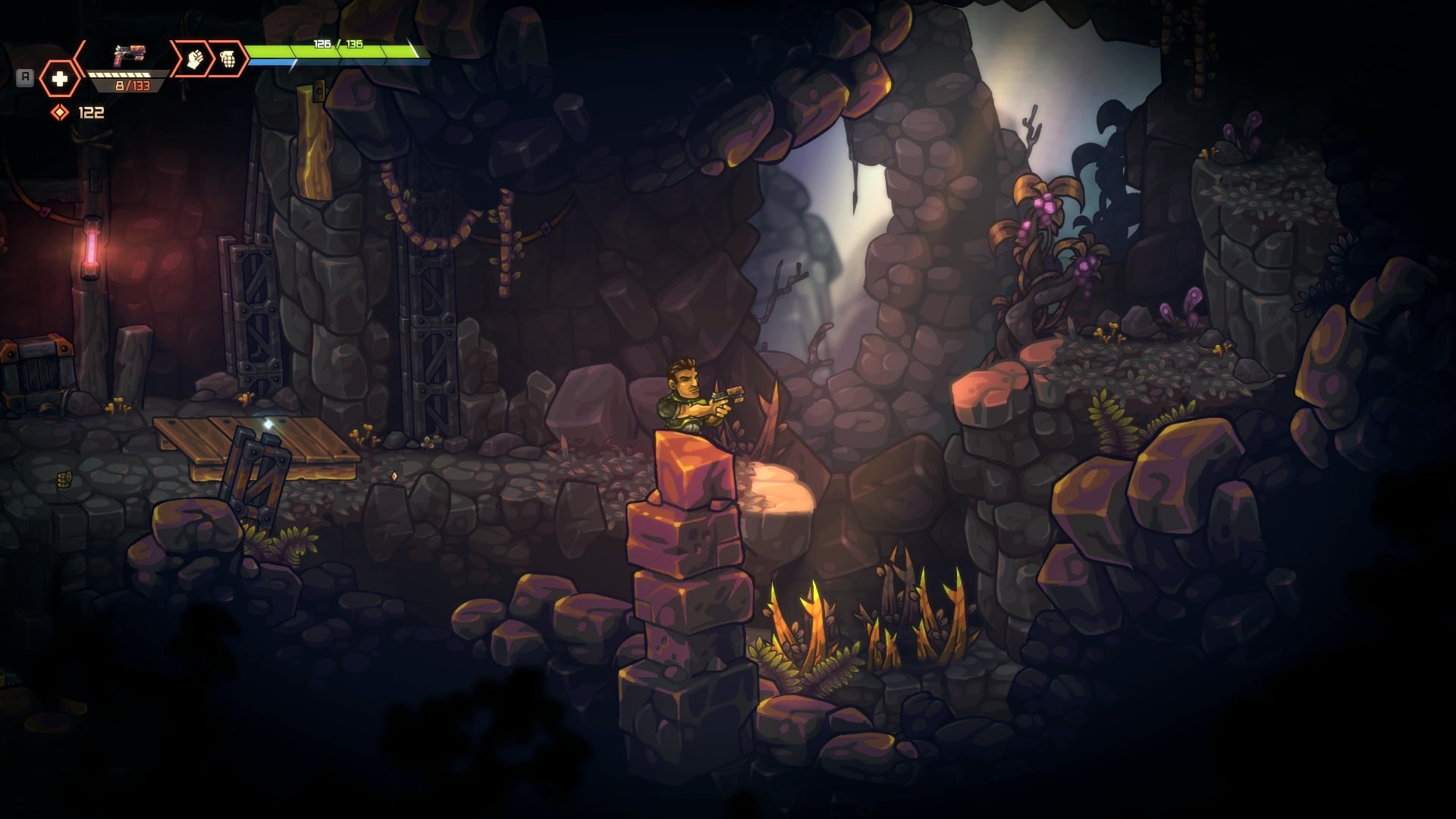 Don’t fear the darkness, a secret is here. You have to walk a few seconds to the right and your screen will turn black. But your bravery will reward you with the very first secret of the game. As for why a skeleton has that much stuff, well, keep killing zombies and stop asking questions. 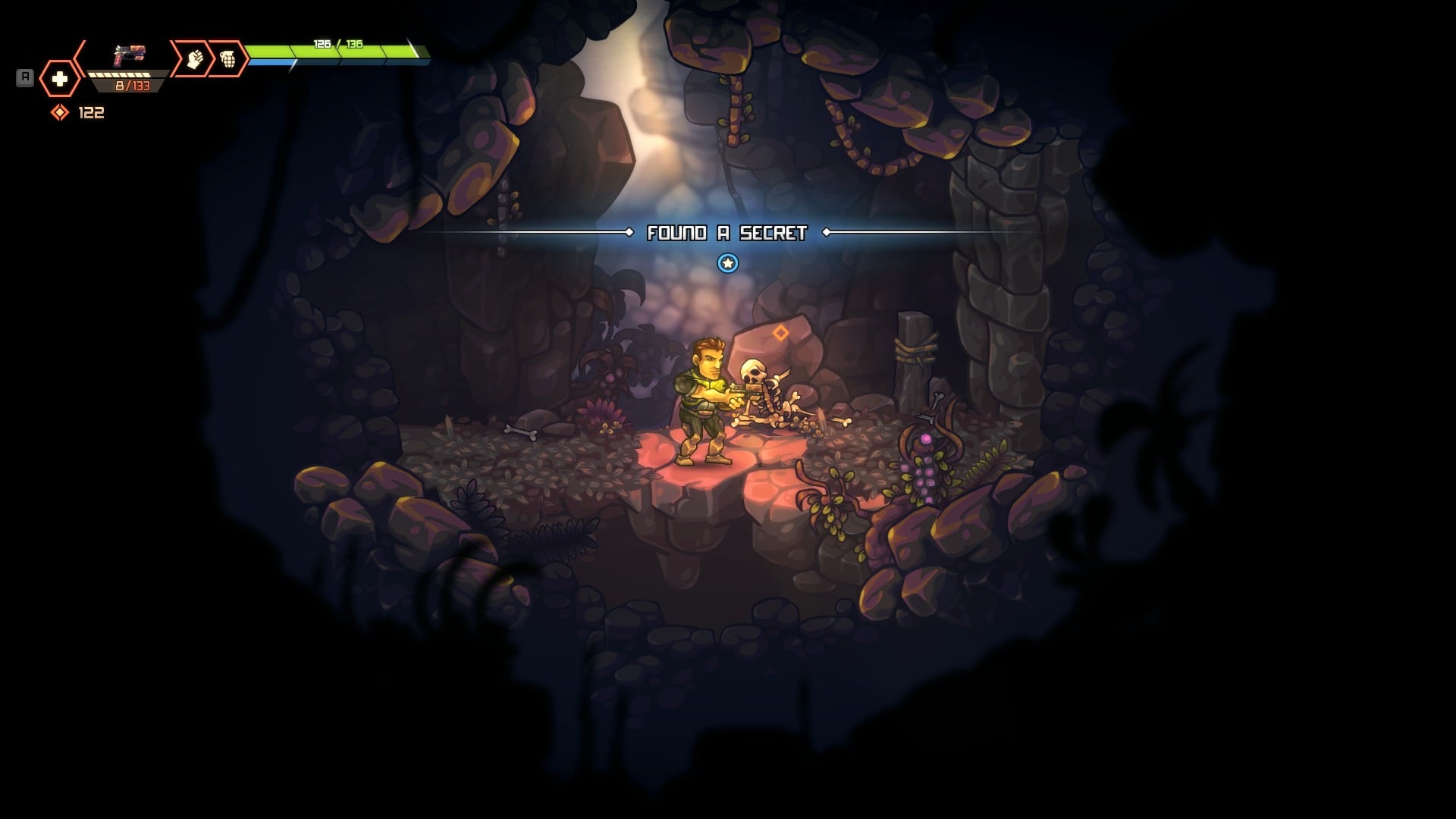 You may have died already, and blamed your lack of stuff. You deal limited damage without headshoot, have a very low amount of healing and even worst, if you die, you don’t have checkpoint and need to restart everything. But secrets are here to save you. 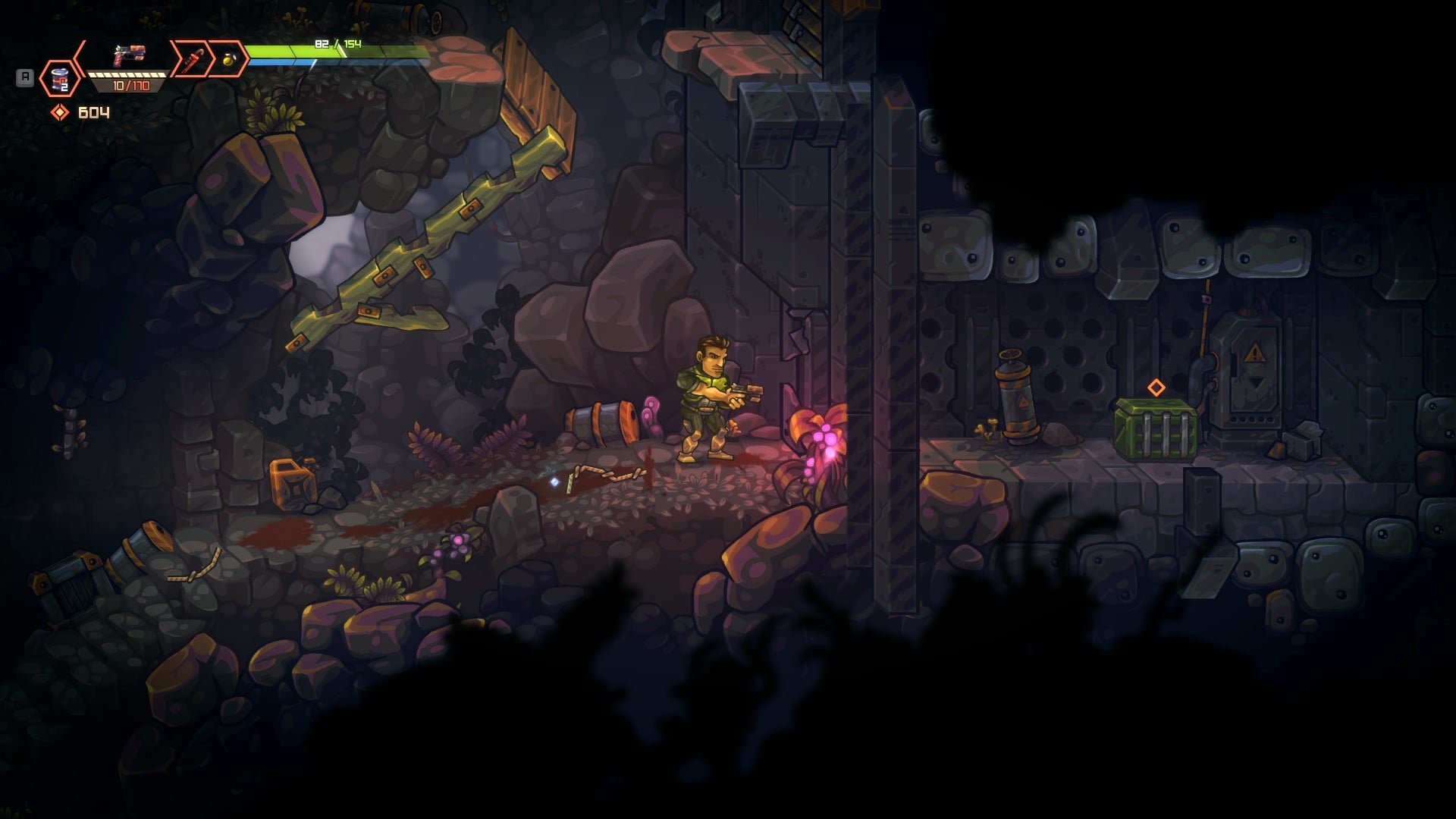 Right after meeting a locked door where you discover that … actually I haven’t read the text, but I think it was important. Anyway, right after falling down, you meet your very first air vent. They will be your best friend, because you know that each time you meet one of those, good stuff will lie beyond. 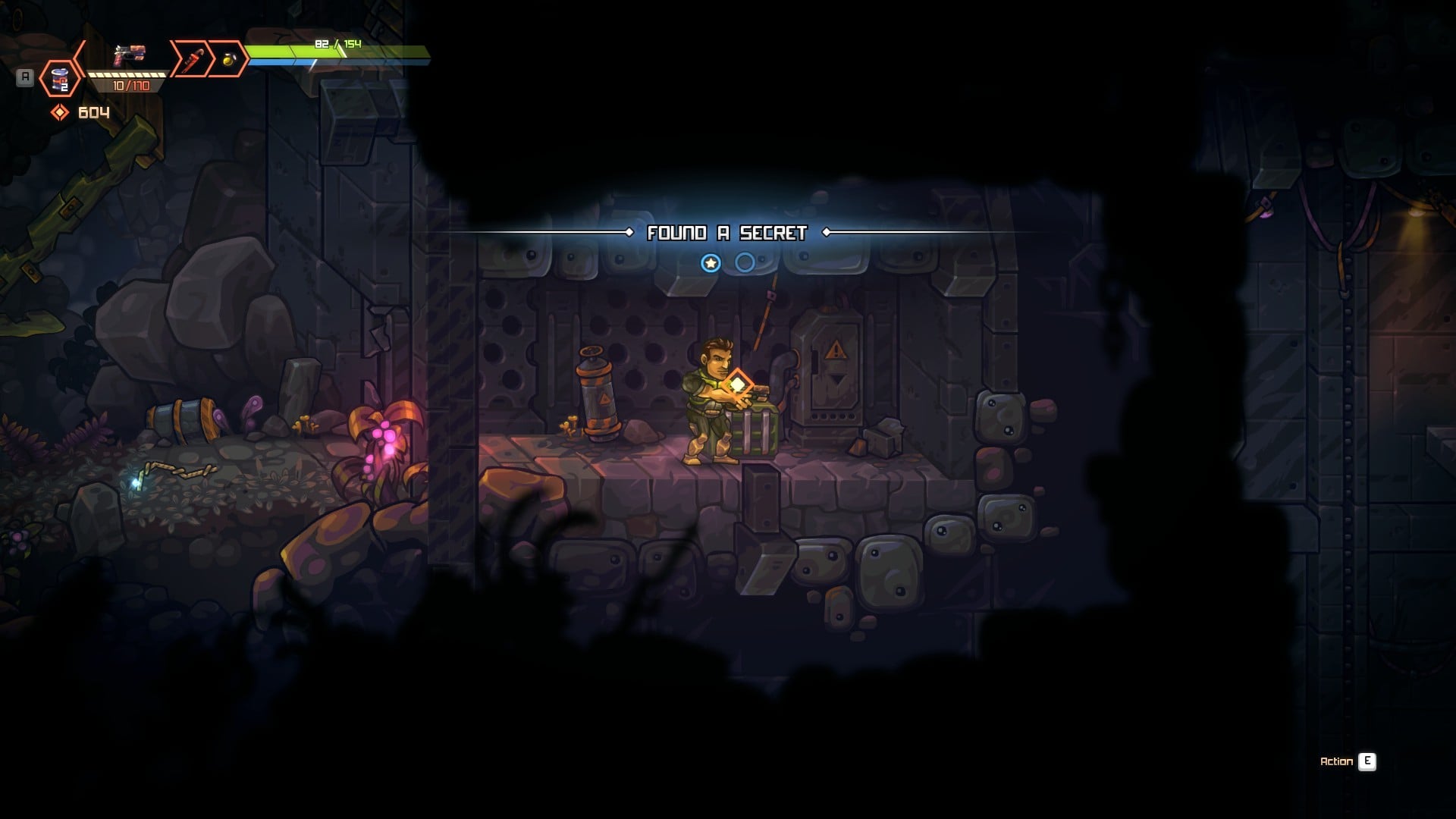 This time was no exception, you can already loot some good stuff at this point. Chestplate, helmet and boots with perks reducing damage received or increasing damage dealt. You will also maybe notice that a lot are based on the very last bullet of a magazine. But who will be dumb enough to rely on this, the reload animation is not cancellable, meaning you are in a world of trouble if you haven’t killed your enemy. 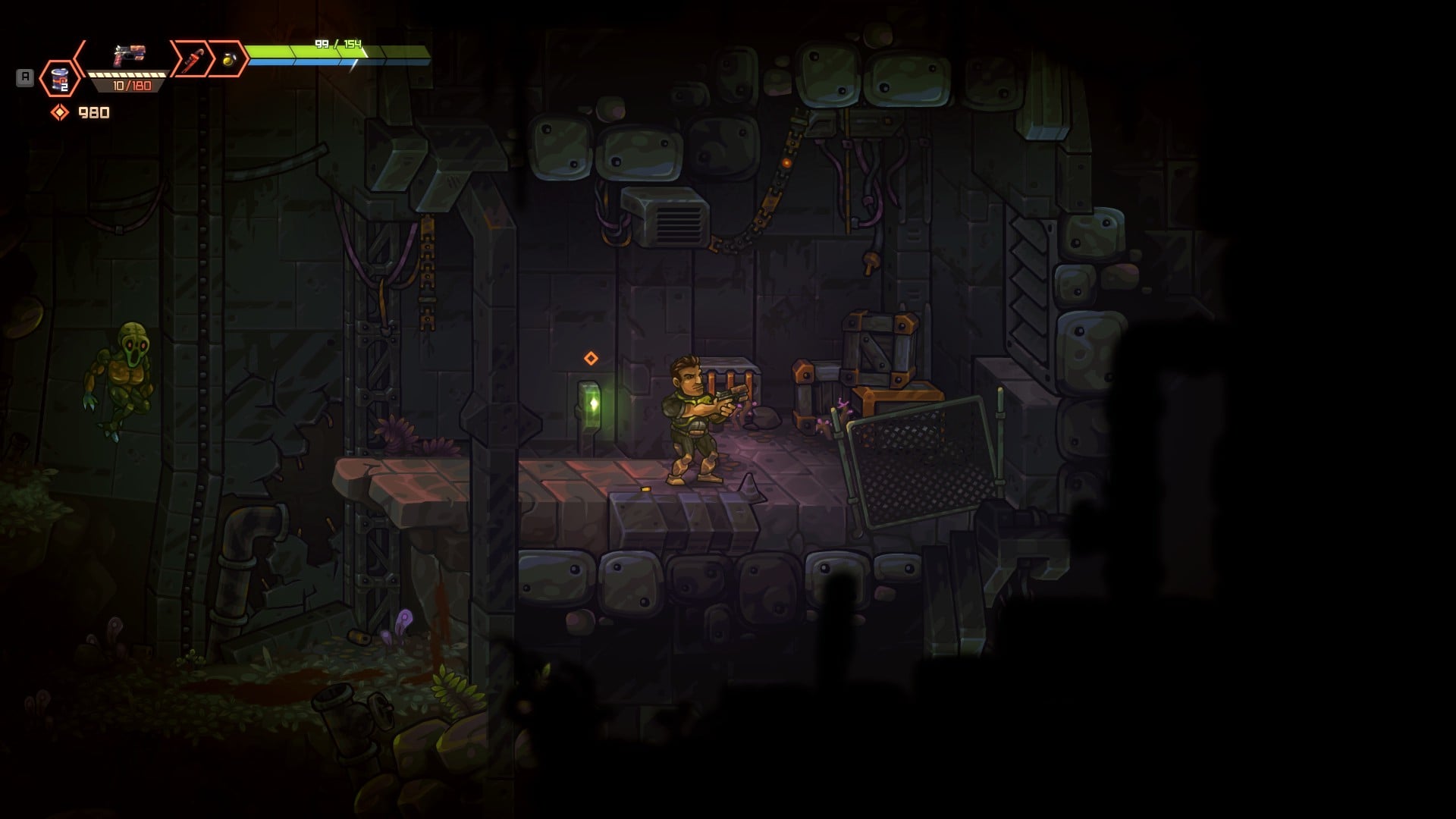 Speaking about enemies, another air vent. But this time, you will encounter your first mutated spider. Unlike zombies and in fact, all enemies, spiders can’t be headshot. But they are also the worst at melee attacks, so it’s a bit fair. Right next to the elevator, destroy the air vent and head to the right. Destroy a second air vent and you find the first shop. Unfortunately, you have no money. 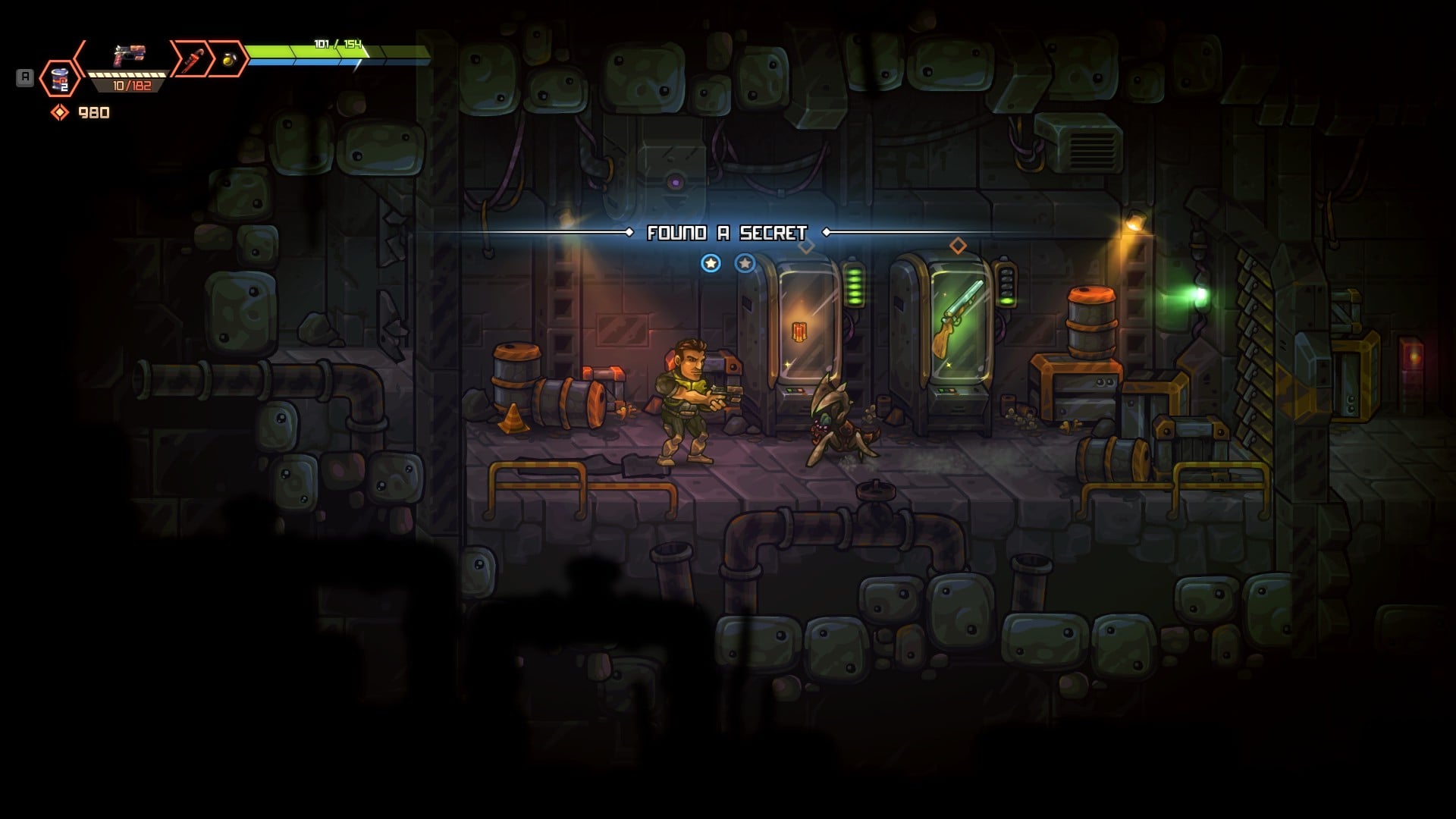 I mean, what’s the point of discovering a secret shop, when you can’t even buy the weapon in it? As for buying ammo, don’t. If you follow this guide, all the weapons and armors sold in the shops will always be inferior to the ones you will wear. Meaning you can focus on buying health stuffs, you will need that later.

First level entirely in a structure. You will have fewer way of getting out of sticky situations and will have to always remember that if you have to fall down somewhere, it’s not where you should head first. In that regard, at a moment, you will have to take an elevator. Head upward, and to the right there will be an air vent. Remember what I told you about air vents? 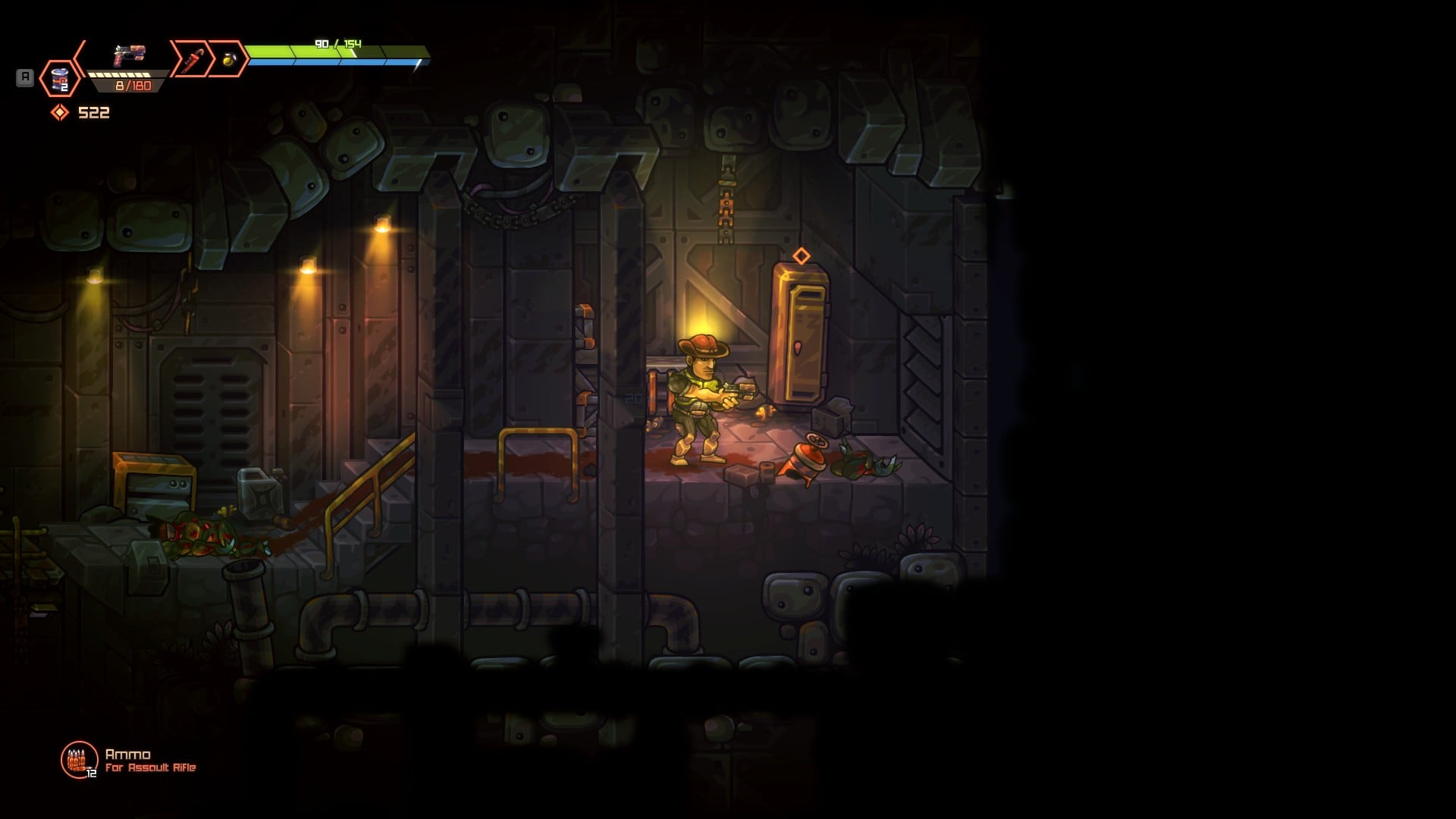 Do not run to far to the right and look downstairs. There will be a small platform, make sure that you don’t destroy it. Because nearby, there is another air vent. This one give you the secret you seek. 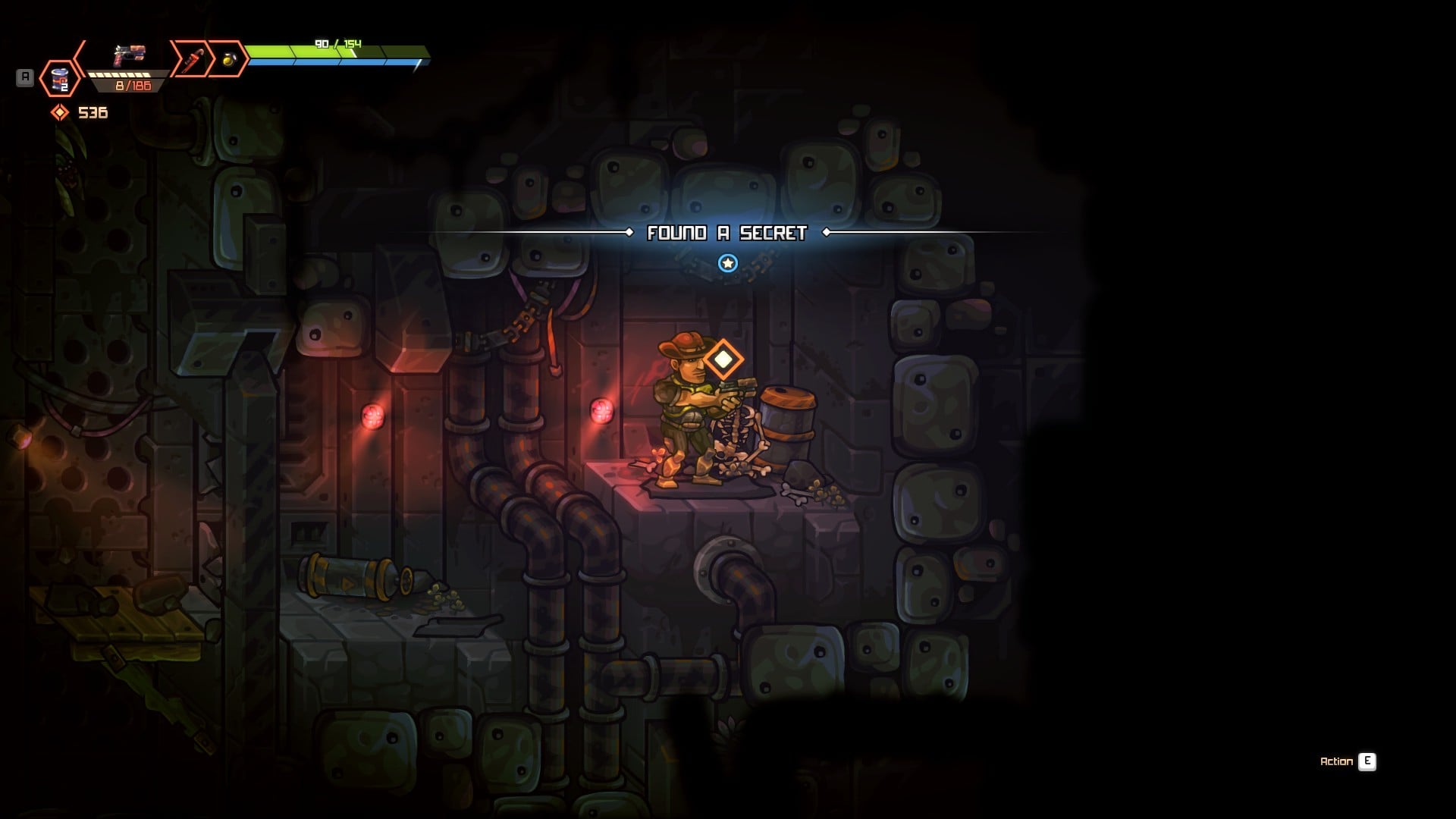 This level contains 3 secrets, but fear not, they are all easily obtainable. The first one is a bit trickier, but not necessarily hard to obtain. First of all, you begin on a platform. Just under it, there is a cracked wall, destroy it and reach the end of the corridor. Click on the button to open a door. After that, descend further and go left until you reach the computer. 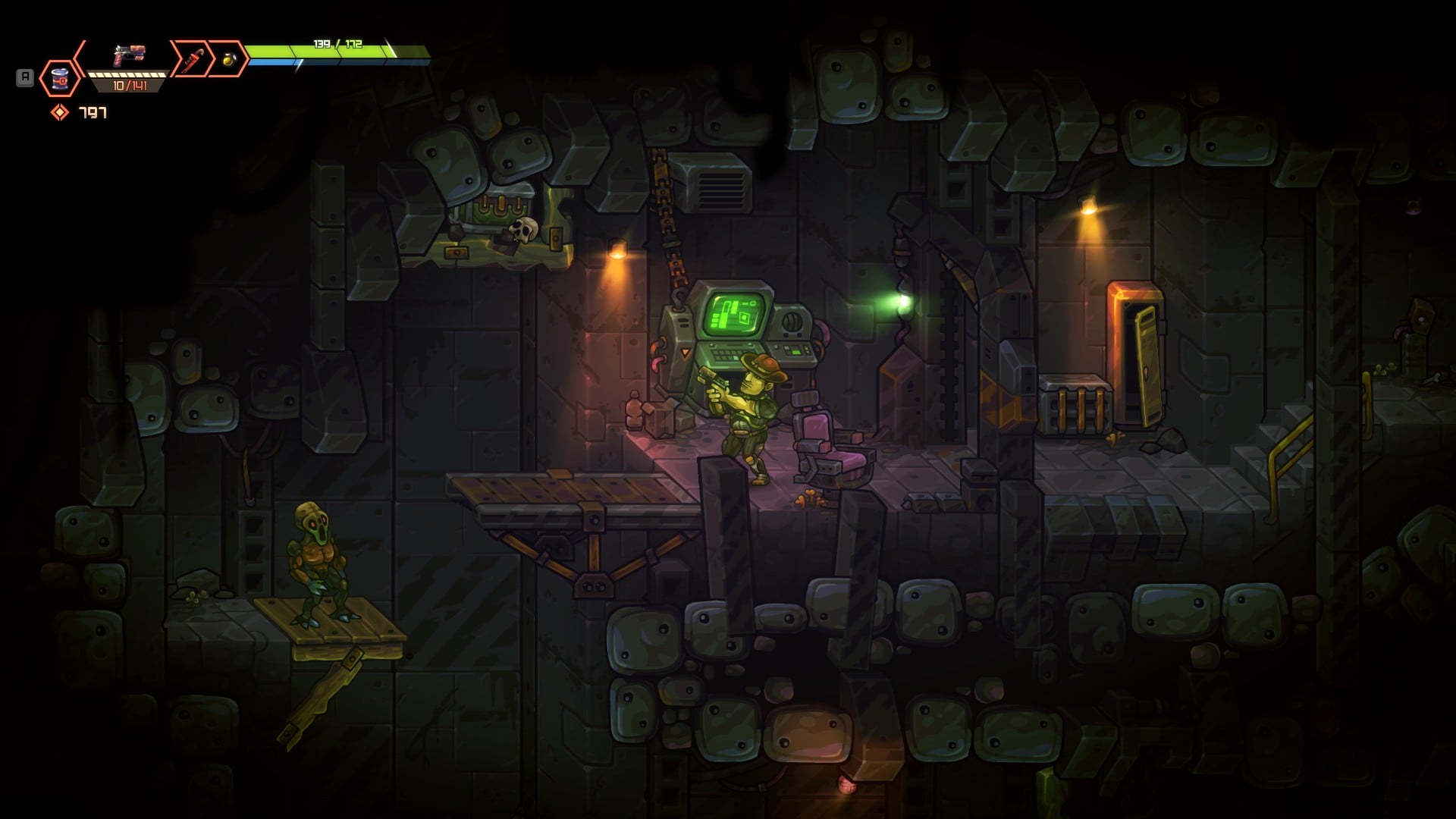 After hitting that sweet orange button, you see a few broekn planks appearing above you. Shoot them and SURPRISE! A spider! No, just joking, that’s the secret. But there really is a spider also. At the same time, to add more fun, the moment you reach the chest is the moment the game decided to lower the bridge and you meet two zombies downstairs. 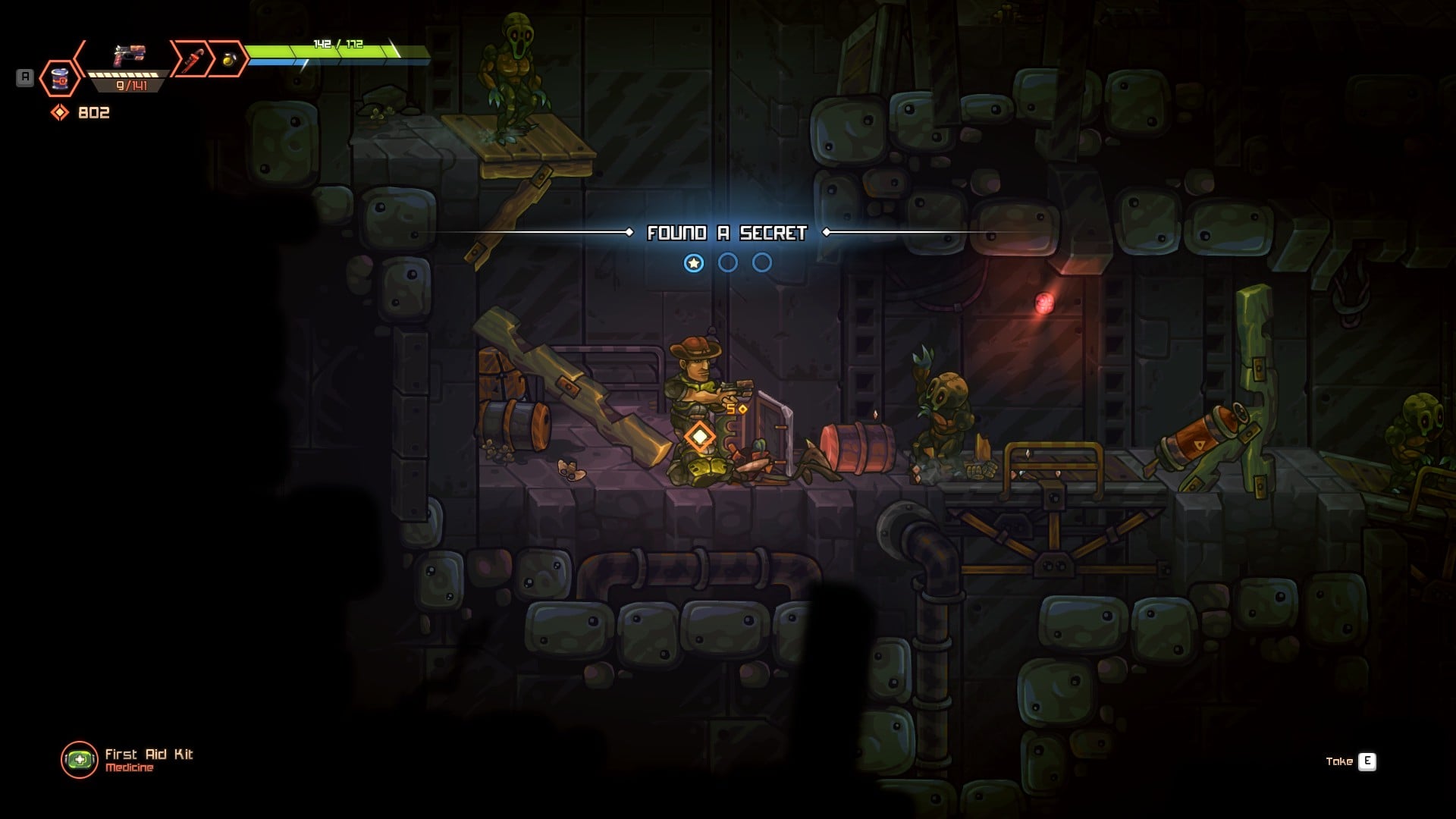 After that continue the level until you reach an elevator that will necessarily break a few planks. On the left, there is a masked hunter that will throw a few spears at you. Jump on him, rip and tear him apart. After walking on his very corpse, you find a skeleton filled with treasures.