I have written the following guide in order to share a deck build that I have found very efficient during my many runs with Doc. The deck is focused on boosting Team Survivability, Healing Efficiency, and Rapid Revival. The deck is also more geared towards Veteran difficulty rather than Nightmare – I may do a separate guide for Nightmare in the future.

Since the launch of Early Access, Doc has quickly become my new favorite character,
and I’ve been experimenting with a lot of different deck builds in hopes of finding the right one. Following multiple reshuffles and adjustments based on the many new missions, this is the deck that I found the most useful and effective for running the Back 4 Blood Campaign with Doc as a Support.

Please bear in mind that this deck is adjusted to my own play style, and you may or may not like or find the card order as useful as I have. I’ve built this deck with the idea of boosting my team’s survivability, and with a focus on healing efficiency and rapid revival. You’ll also find my analysis and explanations as to why I’ve chosen these cards, and this particular order. Now let us begin. 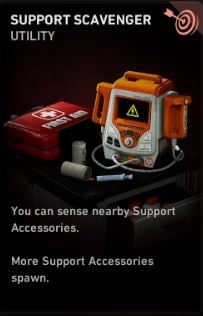 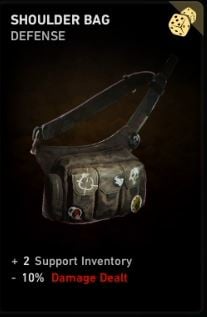 If you’re playing in a pub game and you’re just getting started with Doc, then I would recommend to swap out Shoulder Bag for Inspiring Sacrifice, as that may help even more if the team gets incapacitated a lot. Otherwise, I found these 2 starting Cards to synergize really well, especially during the first mission, regardless of whether you’re playing Act 1,2 or 3.

The idea behind it is that I want to start spawning Healing Accessories (Pills, Bandages, Health Kits, Defibrillators) as quickly as possible. I also want 2 additional slots so that I can hold multiple items, and also start stacking them for future missions.

Personally, I don’t mind trading off 10% of my Damage for 2 additional Support Slots, the Damage Reduction doesn’t seem to affect headshots, and I can offer much more value to my team with 2 extra Support Items as Doc, than with 10% more Damage.

If you’re lucky and if your team doesn’t take too much damage, you can even end the first mission with 3 Bandages/Pills/Kits, and even a Defib. Your team can also take advantage of the extra Support Items spawning around the map, and can stack them for later use. 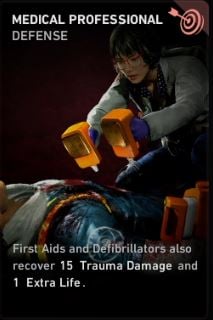 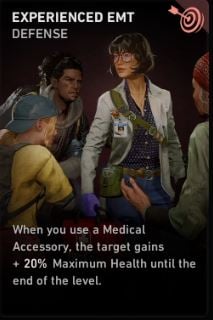 If you ended up with 1 or 2 extra Health Kits after the first mission, then it would make sense to play the Medical Professional card. I personally found that card to be one of the most overpowered for Doc, and I like to play it as early as possible, especially if I already have Kits and/or Defibs on me.

If your team is doing well on Health and you’re not expecting to get downed anytime soon, then you can play Experienced EMT. Increasing each of your teammates’ total health by 20% can go a long way to finishing any mission without too much of a problem.

For the 4th card I would normally go with whatever I didn’t select in the previous round. You obviously have many more choices than that, and you should always choose based on what you believe will help your team the most. I reviewed all Support Cards and re-watched a lot of my missions, and leading up to this point, these 4 starting cards have proven the most effective for me.

By now you’ve already become a fairly strong support. Your cards spawn extra Healing Items which you can easily stack, you have a very powerful heal (that can also recover Trauma Damage and 1 Extra Life if you use Kit/Defib), and you can also buff up your team’s Max Health by 20% (including yours) every mission. This is already on top of the 3 default x 25 Health Bandages that you can apply to your teammates once every mission.

Now you should have a bit more leeway when it comes to the next choice. I tend to vary mine in between the following: 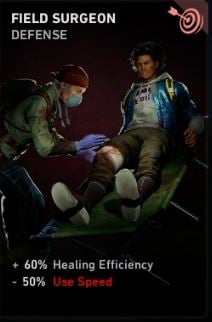 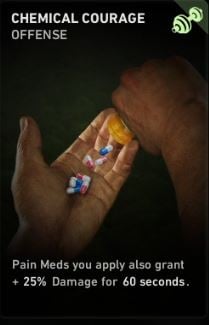 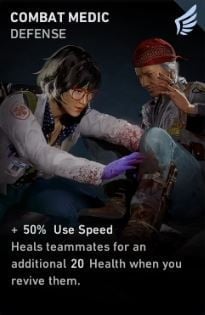 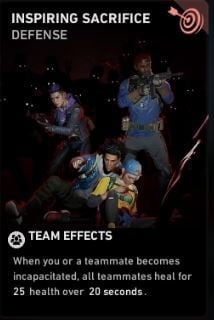 I would normally go with the Field Surgeon, as I want that extra 60% Healing Efficiency (on top of my default 20%). This almost guarantees that I can bailout any teammate who’s low on health, and quickly bring them back into the fight. I don’t find the -50% Use Speed to impact me that much, sure you have to wait a bit longer to open up supply crates and loot rooms, but other than that, your teammates can well compensate for it.

Inspiring Sacrifice used to be my go-to card during the Beta, especially while playing with Mom. It was a must-have card right from the very first mission. Ever since Doc was released, I felt that card’s value slowly dropping, down to the point where I normally play it when I get halfway through my deck, or by the end. The card does offer value as the further you go into the missions, the higher the chances that one of you will get incapacitated. Whenever that happens, the rest of the team can benefit from the Extra Health, even more so if you’re in the middle of a horde fight.

Combat Medic is a pretty useful card that will allow you to revive your teammates with 20 Extra Health, on top of also giving you a 50% Use Speed, which personally I haven’t found that useful on Doc (bearing in mind that Use Speed is different from Revive Speed). The Combat Medic card can also be combined with the Field Surgeon card in order to negate the loss of Use Speed (should you ever feel like that’s a problem).

Chemical Courage seems like a situational card, and I would probably choose it at this stage if my teammates or I were stacked up on Pills, or if we were playing a mission where we have to run from point A to B with breaks in between. Personally, I wouldn’t stack pills as Doc, as I find Health Kits and Bandages to be much more efficient. If you can coordinate well with your team, and have them drop you Pills on the go, then this card can be very efficient, especially on a Melee, or during a Boss Fight. It can also go well with the Stimulants card, which further buffs the use of Pills. 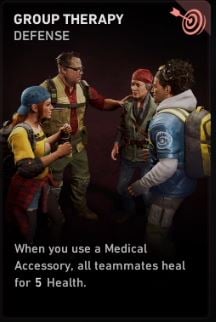 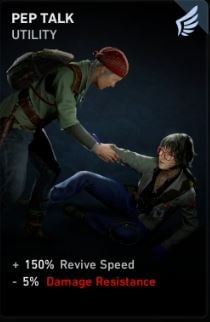 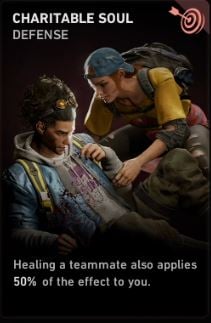 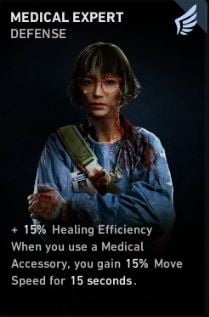 You again have a few choices based on what you feel like you’re missing the most at this stage.

Medical Expert can bring you even more Healing Efficiency which should total 95% Extra by this stage, on top of the 15% Temporary Move Speed which can also come in handy during a horde fight.

Charitable Soul seems like a good choice if you’re constantly taking damage, even though I haven’t found any other uses besides that. It’s definitely a good card to have in the deck, and you should normally play it by the end of the run, but I don’t feel like it brings that much value compared to others.

I would probably go with Pep Talk for my next choice as I have found the extra 150% Revive Speed to be crucial during several missions, and I don’t mind the 5% Damage Resistance loss as by this stage I can well compensate with other perks. I also feel that by this stage, Revive Speed is what I’m missing the most in my build.

Group Therapy can also be a nice addition to the deck, especially if you’re constantly using bandages on either yourself or your teammates. Throughout some missions you can even end up using 10+ bandages/pills by the end, so that extra 5 Health per teammate can stack up really well. 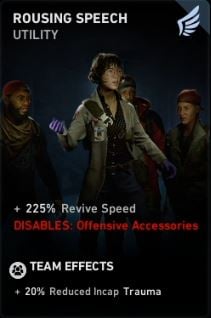 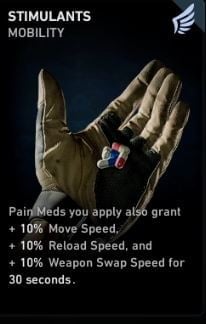 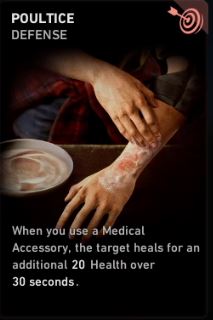 These are normally the cards that I play last in my deck, if I get the chance.

Stimulants can be a nice addition on top of Chemical Courage, but alone I feel that they offer very little, and this card should always be kept as one of the last.

Poultice gives an extra 20 Health but by this stage you’re already a beast when it comes to healing. I may replace this card in the future with the Needs of the Many Card which gives 1 Extra Team Life at the cost of 20% Health. My reasoning would be that if you already played the Experienced EMT Card, you can negate the 20% Health loss by simply bandaging yourself once per mission.

Rousing Speech is an intriguing card that I’ve experimented with very briefly. Personally I don’t find the added +225% Revive Speed and +20% Reduced Incap Trauma to be nearly as good as giving up my Offensive Accessories slot. My reasoning is that by this stage (if you have constantly bought Team Upgrades) you should have at least 2 Offensive Slots, and at least 1 Offensive Upgrade. I find that no matter what I use (Firecrackers, Pipe Bombs, Grenades, Molotovs, even Flashbangs), I bring much more value to the team than additional Revive Speed and a fairly low Incap Trauma Reduction. I also feel much more exposed without having Offensive Accessories on me, and I need to be much more reliant on my teammates, effectively putting more weight on their shoulders. The Pep Talk Card already gives you 150% Revive Speed and that’s more than enough in my opinion.

I hope you have found this guide useful, and if you have a different Doc build that you really like, or a different combination that has worked well for your games, then I would really love to hear it so please make sure to leave a reply in the comments and I’ll get back to you as soon as I can.