This section is talking about moves and move choices when it comes to deck building. We’re not going to really touch on feinting and reading your opponent here. Now, I could start a lot of places. I could start with how the game stands currently, what balance looks like and all of that, but none of that really matters. I’d rather just say this three sentence thing then just get into what you really came here to know.

The first thing I want to say is your deck doesn’t need to be fast. A lot of new people think the way to victory is outspamming the opponent, just mashing that attack button tilthat HP bar is gone. But there are some problems with this. The first is that all I really need to do is hold block; fast attacks run incredibly stamina negative.

Spamming them on block will run your stamina out and then you have to defend yourself with no stamina, which is nearly impossible, especially if you’re not fighting a rock. Or, what will happen is you’ll be repeating the same attack chains that are fairly fast and someone will know when to use their style ability to counter you. Heavy hits have a lot of frame advantage so linked together they can often still beat faster attacks.

While you build your deck, you should be consulting the details put into the deck editor by hitting L or R3 when selecting a move. Moves with horizontal movement are sweeps. You can also get a lot of good information about frame data.

There are two things a combat deck (again, in my opinion) should have. The first is option coverage. Your deck should be able to cover any evasive action that is not stagger back dodge at any time, between your alternate and your chain.

You can have a high sweep and a low sweep as your next option too; those two have the potential to cover all evasive actions so it’s fine. You can’t have a thrust chain with a thrust alt however, and you really want to avoid a high hitting move with a high hitting alt paired together. In case this was too wordy, I stole an image from the combat decks and moves chat from the Absolver discord. 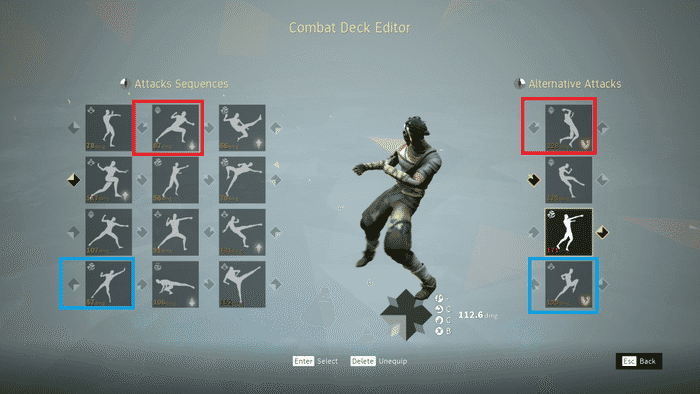 The red squares show that both moves are thrusts, which means at that point you can be safely strafed by something like Roll Back Fist, and people who have that move love to spam it. The blue shows high thrusts, which means you’ll get countered by ducking or strafing attacks. Double bad.

Before I show you another sample deck (one of mine), I should tell you about that second thing your deck should have. Some time ago, when I was maybe only halfway through bronze, Ekayy (who is a god at this game) once told me “every deck should have two guard breaks.”

So I like to tell everyone their deck probably should have two guard breaks (or if you want to get real technical about it, they’re not guard breaks, they’re “breaking attacks”). So here is a sample deck with good option coverage, and at least two guard breaks. 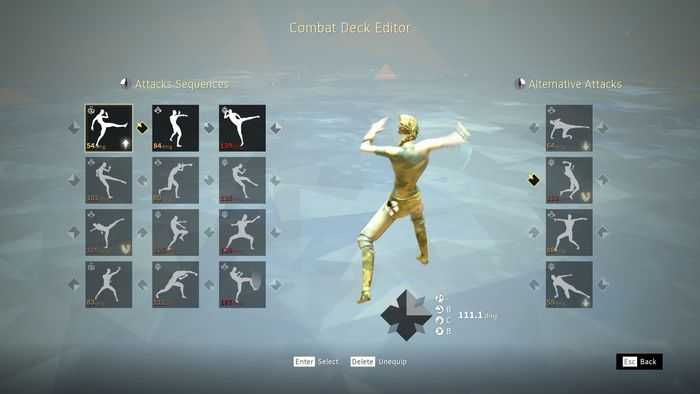 Not only does this deck have two guard breaks, but it has two that can be chained and eat an entire stamina bar. That’s not necessary, but it’s nice. Another thing worth knowing – sweeps will often prevent someone trying to neutral dodge (I say neutral dodge to not confuse with windfall’s avoid which is sometimes poorly referred to as dodging). I’ll go through the moves so you can easily look them up.

Now, I’ll give you some things to think about while building your deck to combat the different fighting styles; particularly Forsaken and Stagger. Forsaken parries either left or right; they dont have to worry about up and down like Windfall.

A tip I got from Mister Eko was that you should be able to attack left or right at any time to avoid getting parried. You’ll see that the deck I made does in fact do that. This way, it can be much harder for a Forsaken player to react correctly.

You should also know that Mid Thrusts will interrupt Stagger’s backdodge. I didn’t know this until about three weeks ago when obliviondoll told me and I felt really stupid. I will give you one more deck, the one I currently use, and then explain it to you. 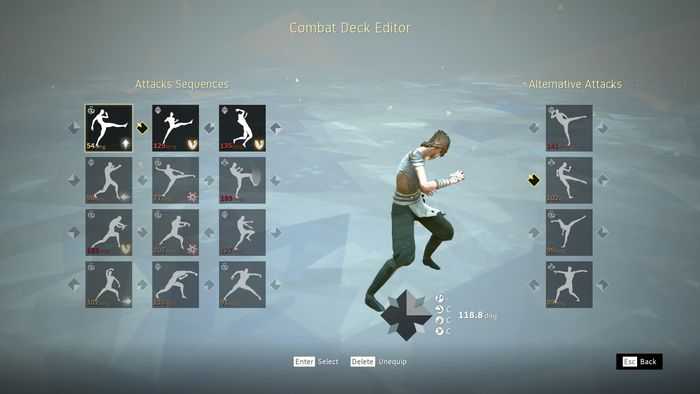 I built this deck because I was getting really frustrated with stagger back dodge. So, I made all of my alts sweeps, then I put in as many mid thrusts as my heart desired. I was also able to add in variation of left/right everywhere except after Jumped Light Kick, but that can be salvaged with a timing mixup.

So it works well against Forsaken and Stagger, and the guard breaks really help push through Khalts spamming absorb. We’ll talk about Windfall in the next section, and other tips on how to fight the different styles.

Before anything else, I will tell you this. Stop neutral dodging. It’s bad. I have four moves in my deck that are sweeps and on many people that’s all I hit them with because they keep hitting the dodge button and they need to stop.

The only time it is super safe to neutral dodge is against guard breaks. Other than that, it’s always risky. Sometimes you have to because you’re gonna get ledged, but it’s a bad habit and you deserve to get hit with a 140 damage Side Kick for it. Stop.

It’s almost the sole reason I made this guide, because so many people keep neutral dodging and I just hit triangle the whole fight and I feel bad because they don’t know any better. Now you do. So stop. No dodge spam. Please. I’m about to cry. Maybe you use it when you really don’t have an answer for someone’s pressure. Like, once in a while, someimes, but really you should probably stop.

So dodging actually gives you a couple frames of intangibility. You can clip through a sweep, but it’s really hard to time and costs a fair bit of stamina anyways, and why risk your HP? It is only really safe to dodge a guard break, which even have the audio queue. It is safe to dodge thrusts, but only if you know they’re coming, and not straight backwards.

So yeah. Back to the guide.

Fighting the Styles and Everything Else

So here’s a bunch of style specific tips on how to fight each style, and it assumes the player is fairly good at using their style’s ability. I’ll go through the four styles and some tips on fighting them.

Forsaken is considered the strongest style (though, not by much). There’s a 50/50 chance based on sheer left/right that Forsaken gets a parry, then completely reverses the pressure. This is why I talk about left/right variation in decks, but even without that you can either A) delay attack timings or B) feint.

Feinting can be really hard to read. You can often punish a missed parry from a feint if you immediately go into a guard break that’s not 24 frames (I think in hand to hand that’s only Spiral Palm). Having slower moves built into your deck as mixups helps, but you also shouldnt be afraid to feint the heavy moves either. Many Forsaken players will look for them to Parry, especially on guard breaks.

Windfall is weird because they have four directions that counter specific things. It’s not like Forsaken or Khalt that counters a lot at one time. But, if you get an opening and they’re playing a little too eager on the defensive ability button, you can feint and punish them with moderately fast attacks.

Feinting will also help you recognize their patterns and plan accordingly. Ekayy also once told me you can put as many sweeps in a deck as you want a long time ago. I’m not super sure about this, but I see the sentiment especially when it comes to dealing with Windfall.

Khalt players often like to spam absorb, because eventually they’ll turn the pressure around. But, Khalt is better for keeping pressure, if you play Khalt it’s usually fiarly safe to absorb an interrupting hit/sequence and power through your opponent.

Khalt is one of the reasons (aside from eating stamina) that you should have at least two guard breaks in your deck; guard breaks beat absorb. However, not having enough frame advantage and getting dodged on what you think is a confirmed hitting guard break on an absorb is entirely possible, and has happened to me.

In a hasty rant I made on the steam forums about Khalt’s pretty fast recovery time, obliviondoll reminded me that getting through an absorb isn’t always about guard breaks, but just waiting and delaying the attack to hit after.

Poking and waiting can often be a really good option against Khalt players to see their reaction to getting hit. Is it spam absorb? Is it throw fast attack to interrupt? Do they guard? Feints can be effective against absorb but it’s not guaranteed and is very dependent on the move that follows up.

Finally we get to Stagger. Stagger’s abilities are all attacks, and is the only style that doesn’t get stamina back for using its ability correctly. I find it trickiest these days to fight stagger (I used to struggle the most with Khalt but now I’m mostly okay with it).

It’s pretty safe to throw sweeps at stagger to start; it’ll cover the side to side evades and it will hit the shoulder charge going forward, which never trades well. A shoulder charger forward requires the stagger player having to have a good combo with a mixup or two to actually be worth doing. Even then, it’s iffy.

The real pain is dealing with stagger back dodge. However, it has to be timed well for it to evade you, and some longer range moves can hit poorly timed back dodges like Spinning High Kick, Jump Out Elbow, even Side Kick I’ve found.

But this is why I told you mid thrusts beat stagger back dodge. Maybe you have to crutch on your one direction that has themid thrust follow up to get some confirmed damage. You can also wait after you hit an attack to bait the back dodge, then try to punish your opponent’s approach off the missed reversal.

Or as much as you can of it. This will help you decide how to react defensively and when/if you can interrupt with one of your faster attacks. Your opponent has two options after any attack, and realizing this and remembering parts of your opponent’s deck will help you Parry, Avoid, Stagger or Absorb him.

Everything in the guide applies to sword decks too.