This is the second half of the small resistance questline in Athens. This one is lead by Sokrates.

Return to Perikles’s Residence and speak to Sokrates. He wants to stop the attack on Mytilene, but he’s going to do that through the people’s vote, and not by killing him. 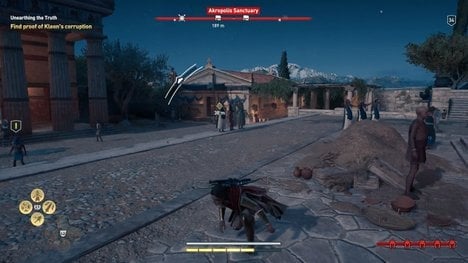 First, proof of his corruption needs to be found. Head to the Propylea in Greater Athens, near the Statue of Athena. This is a restricted location, so be wary of guards. Once inside, look for the following clues: 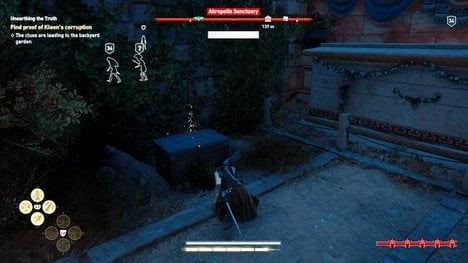 Head out the door into the garden. Go left at the trellises. Look for a chest that has been dug up recently and attempt to loot it. It’s locked.

The key is with a man named Phaelos. He is standing in front of the Parthenon. Climb up the walls of the Propylea and onto the roof of the Akropolis Sanctuary. Follow this to stay above the guards and sneak over to where Phaelos is. drop down to the bushes and sneak behind him to take him out with a sneak attack. Loot him if needed.

Return to the Propylea’s garden. Open the chest. Now the evidence is clear. Meet Sokrates at the Pnyx. Join him in the speech. To be successful, play a little dumb. Choose these options in the following conversation: