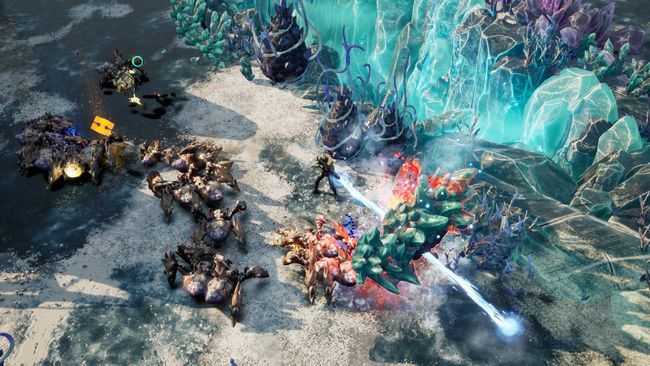 Unleash hell on a coop A-RPG where bounty hunters raid planets for glory. Choose your quest on the Online Contract System. Unlock skills mid-mission to adapt. Wreak havoc with unique weapons. Scavenge materials to boost them. And, if you survive, spend your bounty on gear to live another day.

Informative guide about the basics and in depths of the Warrior Nun.

Cass is a fast-paced character class, who can go from A-Z in a short time while also doing damage on the fly without getting mauled to death by horde of monsters.

You can dodge/dash twice instead of one, giving you more mobility compared to other classes. In addition to that, every 3 basic attacks will generate a Charged Dash, when dashing you deal 250 base damage to any enemies on the travel path.

Throw a Shuriken at enemy and mark them, using this ability again teleports you behind that enemy dealing 300 base damage. (Cooldown: 5s)

• Shuriken is both your primary attack and survival skill, as it is capable of splash damage with a great starting base damage, a tool to quickly gap close and get out in the blink of an eye.

• You can also use it to simply dodge enemy frontal attacks by teleporting behind them or with the right timing, it even negate any incoming damage as she gets I-frame when airbone. On top of all that, the skill has a low cooldown.

Throw a energy wave that deals 250 base damage at enemies. (Cooldown: 6s)

• Beside it being Cass medium range attack skill, it also interrupt and knock back small creeps, with gear modifer it also reduces enemy damage by -30% when they are struck by Phase Thurst. Overall decent Damage/CC ability.

• Great cleaving attack for mobbing and good survivalbility to lose aggro on mobs, either to get into better position or help a downed player in multiplayer. Gear modifier “Stealth Trap” can greatly boost this ability damage potential.

I will only list and breakdown notable upgrade options.

Dimensional Tear area increased by 20% and damage by 50%

• Small combat value, unless you are having Stealth Trap (spawn bomb) and Upgraded Tear (+30% dmg) from gear modifers, then this skill can be a viable pick toward a stealthy burst Cass specialization.

Shuriken Teleport bounces to one nearby enemy

• Pretty much makes Shuriken twice as good as it already is, more damage and more survivalbility when there are multiple enemies for the shuriken to bounce. You get double air-strikes and more i-frame time when airbone.

• Decent in solo play for little damage boost in mobbing or dps bosses. Otherwise not recommended, especially for multiplayer in current game stage because of both low base and scaling damage, on top of enemies being tankier in multi. (.v621)

• Allow you to deal full damage of both airstrikes to any nearby enemies, greatly improving your mobbing capability or damage output on bosses whenever there are multiple enemies.

Unleash a burst of energy in front of you dealing 2000 base damage.

• This burst of energy acts as a travelling projectile, so it could proc more than just one time depends on the size of the enemies, further the damage output. Making a great ability to take, primarily for damage boost and mobbing second.

(At level 10, an upgrade of this skill can help improve DPS)

Perform a great spin attack that covers a huge area, dealing 2500 base damage.

• Which AoE could cover almost the entire screen, dealing major damage making it a great ability to take primarily for mobbing and damage second.

(At level 10, an upgrade of this skill can help improve survivalbility with Lifesteal.)

• Grealy further more your damage on the fly when performing charged dash, it can deal 1400 damage per dash or more if Noxious gear modifier, easily worth up to 3 basic attacks so do try to mix up charged dash into your attacks to maximize damage output.

If you kill someone with Teleport airstrikes, the cooldown is reduced by 2 seconds.

• Really good for mobbing, especially when you have weapon rolls toward Shuriken upgrades (another -2s CD and +30% damage)

After use of Shinkanshen, you have infinite charged dashes for the next 5 seconds.

(Although at current stage this upgrade is bugged, letting player charge dashing forever as long as they don’t stop for 5s) .v0621

After use of Phase Breaker, your attacks restore life for the next 2 seconds.

• The lifesteal is in effect right after Phase Breaker is used, meaning all the damage caused by your ultimate will also restore health, which can quickly heal the character up to full when used on grouped enemies. Otherwise continue swinging your sword to restore the remaining health points.

You would pick this one for the same purpose as Phase Overload. Only real difference is that Charge Master is effective at all times, you are still going to manually charge your dashes, but twice as fast. 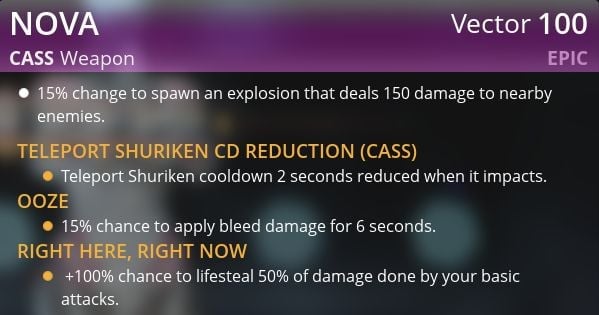 Unlike DoT weapons which override each other of the same effect, Nova instead spawns an individual raw explosion each procs, allow Nova effect to increase your damage output the more it procs. 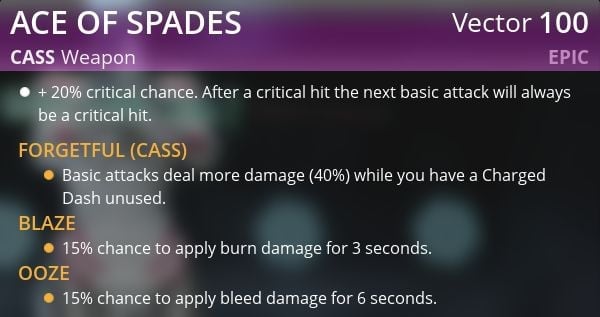 20% chance to deal 100% bonus damage (or x2 damage) on basic attacks. Weapon special guarantee you one special bonus critical hit if one was already made. 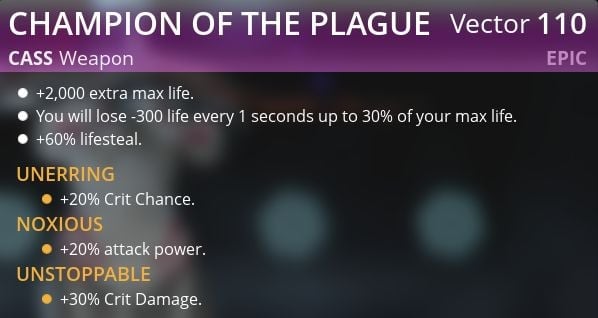 Great 60% lifesteal modifer from the start, as well as direct synergy to the entire plague set for being low health: 50% more damage with basic attacks (Support Gear), 20% chance to block damage (Prototype Gear). The penalty for all that is your health will always get drained down to 30% max HP.

Prototype modifier priorities:
• Extra XP: Enemies killed by you give +40% XP
• Enemy Attack Reduction: Damage from Enemies struck by Phase Thrust is decreased by -30% for 5 seconds.

Weapon: Champion of the Plague

Support: Gladiomod, when below 40% Max HP character deals 50% basic attack damage. Because the plague weapon always try to drain your health to 30% HP, your character will get this damage buff most of the time.

Prototype: Plague prototype is not mandatory for this build to work so any other prototype would be fine. You can either pick KOLE (Spawns turret) or Ischyros (40% basic attack damage against rank S)

KOLE: Turret deals high base single target damage, and can draw extra aggro on enemies. When placed on safe spot to so it can last on full duration, can put some good damage to whoever on other ends of this mini cannon.

ISCHYROS: Boost your basic attack damage by +40% for S rank enemies, mainly used for gold contracts where you fight unique bosses at the end of the mission.

Prototype modifier priorities:
• Extra XP: Enemies killed by you give +40% XP
• Enemy Attack Reduction: Damage from Enemies struck by Phase Thrust is decreased by -30% for 5 seconds.