Here’s a basic “primer” on how some of the game mechanics work. It came about as I realized what I wrote when answering a discussion page ended up super long. Thanks to Ilya Merian for the first third, about card mechanics and effects.

The main card mechanics are Flow and Trinity.
Flow: If you have it (you build it through ‘Gain X Flow’ effects on cards), one stack is used when you use a spell. Some cards have special effects if cast when you have flow.
Trinity: Stacks up to 3. When full, the next card with a Trinity effect uses all 3 to do the effect.

You can run out of Flow (which just means the effect doesn’t go off, but you can still cast the spell), but Trinity never goes away unless it gets used. So in general, Flow decks are harder to manage, while a single Trinity card might be fine to use and pays off in a longer fight.

There’s also status effects like Frost (whichs builds to 3 then explodes to do 100 damage), Poison (periodically does a damage tick, then halves the poison stack on the enemy) and Burn (which does 10 damage per tick).

It’s all pretty self-explanatory, and explained in the game with tool-tips on the cards themselves.

Gameplay advice and some tips

HP is your most critical resource. Evading enemy attacks is a key in this game, and most enemies have a pattern you can learn. The farther you go, the harder they hit, the quicker they fire or the more they fire.

That being said, HP is also a resource. If you can learn how far to push it, you can either facetank attacks that would kill hostages or in order to take that extra few seconds to break chests.

Speaking of chests, chests have artifacts. A lot of the artifacts seem pointless at first, until you start getting some concept of synergies. The more cards and artifacts you unlock, the more synergies you’ll discover. I’m a big fan of poison, but it’s a bit slow – detox + anubis + the poison vial artifact is a great way to do a ton of damage to something in just a few seconds, but if you miss with detox it’ll still tick down.

Consume just uses the spell for that fight. That’s actually super useful – in fact, getting the “double damage and consume” upgrade on a few cards that do a ton of damage and then keeping a shielding card (shields up, restore 1/2 MP is a good one) and an AoE card (glitter bombs if you have it unlocked, or the hearth card that cracks all four center tiles) lets you just cycle those two cards and concentrate on dodging/auto attacking.

Saffron is a very forgiving character, but if you can unlock Reva, Reva’s default loadout will teach you how to aim, and dodge, and pull off what look like BS moves. You unlock Reva, or any character, by beating them as a boss on floor 4 or higher (I think, it might be 3). The shopkeeper you have to beat in a fight. She’s easily one of the harder bosses, if just for the clutter and the chunkage, but she’s beatable or cheesable.

Dying and dying often is fine. I wish there was a “restart run” button, but you can check your seed on the load screen. Seed only seems to impact the order of stages, from what I can tell, but if you like the seed you were on then try it again.

Killing the bosses nets you an artifact. Sparing them nets you a 400HP heal and 2-5 levels of “assistance” (looking at you Hazel, you’re useless, go build me a shield generator instead). Saffron is probably the most useful assistant, followed by Terra. Reva will save you once when you die. Gunner gives you extra HP in the camp. Shisho…. does something in the camp, but I have no idea what.

Chests are SUPER annoying mobs to fight if you’re not prepared. Generally speaking, they’re pure DPS checks, although one annoying bastard is an aim check (please get rid of this one, it sucks). Crystals explode into extra cash.

Try not buying any upgrades at the store, and using restock and the challenges to get your upgrades and removals. Multi upgrading a core spell can bring you farther than spreading the upgrades out, but not always. Depends on the build.

Every spell has a use, I think. That being said, some are hard to use. Speaking of hard to use, here’s my tier list from easy to hard characters to play as.

Saffron (No cost machinegun fire, four spells with different utilities that will teach you about anything but trinity)

Shopkeeper (your HP is your money. Your money is your life. Tapping I will bring up a shopkeeper all the time, with rerolls getting you new free inventory. Have fun)

Reva (slow, methodical, tanky as hell, combos up nicely with a bunch of things. Learn how to dodge and never die with her)

Gunner (hit with the gun or cast nothing. Gunner makes you learn the opposite screen)
Hazel – smack dab in the middle, her AA hits the square in front of her, doing semi-decent damage (although it’s slow). However, if it’s a structure (including rocks, missile silo’s, volcano’s etc) it’ll give it shield and spell power. Her starting kit is based around putting down a turret, buffing it and then micro-ing enemies into the line of fire. Be patient with her. I’d recommend hostage rescues > hazards to start off with because a little foresight will easily have the hostages survive. She also starts with a trinity generator in minnie gun, which can combo nicely with tri-rag or sequencer for a little extra dps. Side note – her turrets can hit her!

Terra (not my favorite, her AA is a little costly and irritating, but not as integral to her kit as it could be)

Selicy (her AA is hard to use and costs a lot of mana, but is a dodge. AA damage is linked to ice stacks)

Violette (unless you can nail her micro, in which case she’s stupidly strong. when I’m on with her I can waste the field in seconds. When I’m off… well, I die.)

Shiso – I’ve literally never played this character and have no tips. I apologise. Apparently if you save him, he gives you an artifact in the campsites.

One last note – the spell tips, at the lower left, and the artifact tips (same) will actually help you with some beginning combo; for example. the text for Zenith (below) hints that you should cast it before a dash. If you have access to Selicy, who’s AA is a dash, you’ll find you can Zenith dash to bomb almost the entire enemy area, which is quite powerful, and is the intended “use” of this spell. Presumably other dashes would work as well. 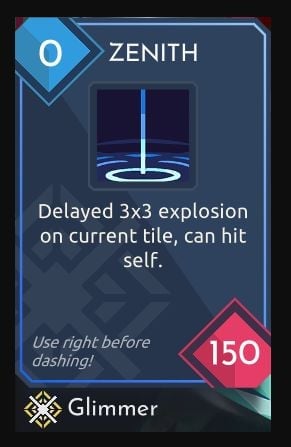