This is almost full guide for this game about achievements, some tricks and secrets. Some of the achievements is easy some of them not but its all doable. I should say Thank you for all people on forum who helped with information about achievements. Also big Thanks for developers of that amazing game.

Here is some tips about achievements. To collect them all you’ll need to play the game in 3 playthroughs because of characters. Some achievements can be achieved with different ways. I’ll try to explain at least most of them.

We must became stronger
You must defeat Evanger. Story line. Can’t miss. Possible it may unlock in Sewers or in Low Kyalisar. I got this in Sewers.

We Are Deserved to die
Defeat Valkarin. Story line you can’t miss it.

To be continued…
The end of 3rd chapter. Can’t be missed.

The End?…
Finish the game. Simple as that.

Plundering of Imperial tombs
Evia’s playthrough. In order with Main story line you shall meet Evia’s story line about her past. You should discover how did she died. It possible to achieve in almost end of the game in one of the Imperial Tombs. Just search in every Imperial Tomb and you’ll not miss that.

Restored house Malfagon
Jasker’s playthrough. In order with Main story you’ll meet Kiri Malfagon(also she is avaiable for other characters). But this achievement only for Jasker. You must help her all the ways. I got this achievement just for entering Prolocutor’s House when Kiri asked me to kill him. Just enter the building and possibly you can get it. Seems it means return of Jasker to his duty. Actually just play all Jasker’s story line and you can’t miss that.

Revived Guild
Kalig’s playthrough. You should spare Nemek in Werewolf castle boss arena (you should kill boss first, then Nemek gives up). You will get it after you speak Krenze in Oracle chamber in Sura Lands, return to Thole and fight Blind demon.

I command you!
Side story line. Actually you’ll need to do that because its 2nd member of party that you can get. Unlocked in Thole’s discovering.

Or you can save your progress before that moment and take one minion, then restart you save file and get second minion. I think that works too. But only one of them avaiable in one playthrough.

Zaar get lucky!
Zaar’s storyline. You’ll meet him in order with storyline. To get this achievement you should complete at least one quest – Bring offerings to the spirits of the Moon. So offerings is a Totems. It placed in different places. An Altart where you should place all Totems is placed in the middle of Moon Wilds in Taimuria.

So location of Totems:

1. Kogog’Aak – 1st Totem is placed here. You may it in Broken Spear Pass if you go to the North of the map. There you should solve some puzzle on West of Kogog’Aak and there you’ll find it.

2. Taimurian Wilds – Here the puzzle which you should solve to get a Moon Totem

4. Dura’Tyr – On the North way in the corner of the map you’ll find a last Totem. Isn’t hard.

After all get back to Ataka, a Captain of Taimurian Camp and talk a dialogue with her. Be sure that you didn’t told her whenever about you’re Demon. 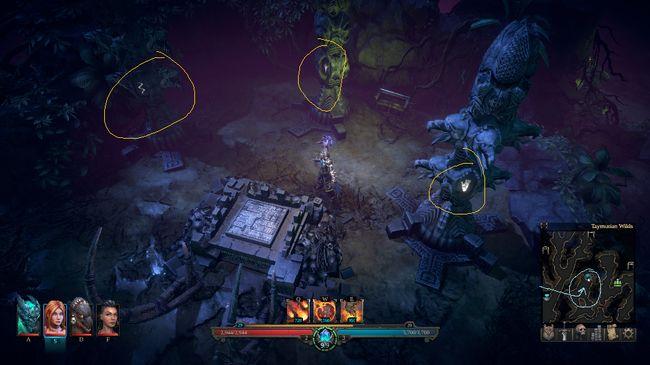 Veteran’s Day
Kinda hard achievement. To get this one you can try that with diferent ways.

1. In order with Werewolvers-Anarchists quests avoid doing that untill you finish buisness in Taimurian’s Counsil in the end of Dura’Tyr. It is story line so can’t be missed. You should say to Werewolves-Berserkers that you wanna save them and already placed 2 Totems to Spirits. Avoid agression all the ways. I can recommend you to save before that moment.

2. That way I found on forum, didn’t tried that but possibly thats the way too. During the Lower Kyalissar quest to obtain Werewolf Shaman Staff. In the end you should chose to give the staff to inquisition Mages, they left without fighting and after that achievement could unlock.

This achievement can be unclocked after Infiltration of Penta Nera. You awake in prison and after you’ll catch a rat you’ll get this achievement.

Perhaps it can be unlocked as “Wasp and Wood” too. Save your progress before that moment and try both characters.

Free Corvent
Darius’s achievement. I got this just for obtain Darius in team.

Sympathy for Sura
Falona’s achievement. When you obtain her you should avoid fights with Sura Warriors, at least dont kill named Sura Warriors. Best way to do that just run in shadows all the way to Falona’s allies. Then speak “that was a problem not to kill them” or something like that. After that you can annihilate all of them after you get that achievement.

I still need to complete that achievement, but I found a description of that on forum.

Dracon Tamer
Imperial tombs quest with bonekeys. Third Shadowhand offers you his soul. To complete achievement you should deny him, take last bonekey and proceed to last Tomb. Kill boss and take his soul.

Devourer of puppets
Actually it can’t be missed. Nothing special.

This achievements actually cannot be missed if you play through all quests and doing everything. But its not story line so someone can skip it.

Lord of Suffering
Saleen’s quest. You face demon in the cave (West part of Outlands). If you accept pact and kill man, you get evil karma, if you accept pact and refuses you get good karma, if you deny pact you stay neutral. If you fulfill the pact demon gives sword without fighting. If you want legendary armor pieces of Devourer you should choose one of two left variants.

Catch this!
Again Arashaad’s quest. Outland caves where 4 entrances are near each other.

The Last staff of the Grey Claw
Lower Kyalissar. Speak with werwolves miners, you have to complete quest before Kiri/Tiberius quest, or you will not be able to open House Eagle doors.
In moon wilds you find secret door. Answer for riddle is Moon. No matter what you choose (fight or not fight Inquisition mages) you get achievement when you pick staff.

Espionage
You should complete “Taimurian curse quest” and replace Werewolf Shaman in Cave with shaman in Conclave before speaking with Evanger/Valkaryn.
Achievement doesn’t depend whom of them you speak to enter Penta Nera speakings.
First of all avoid any quotes about some of you party members or any deals you’ve done.
That should be something like that:

Specialist
Just up any skill to 3 lvl

Unstoppable
Just break everything you can. The score continues if you start new game with new character. Score along with rat kills is general for your account.

Rat plague
There some rats in game. They just living on maps and do nothin against player. Just kill them by pressing shift and aim at them.

Believer? Or just stupid?
After exit from first map you may find a well\hole in basement. So just click there 1k times to waste(or spend?) 1k gold. After that you’ll get an achievement and legendary hammer Mjolnir.

Relics of Fallen
You should find all teleports on the maps.
Here is screenshots with its locations.