Tier list for each character in Ship of Fools. 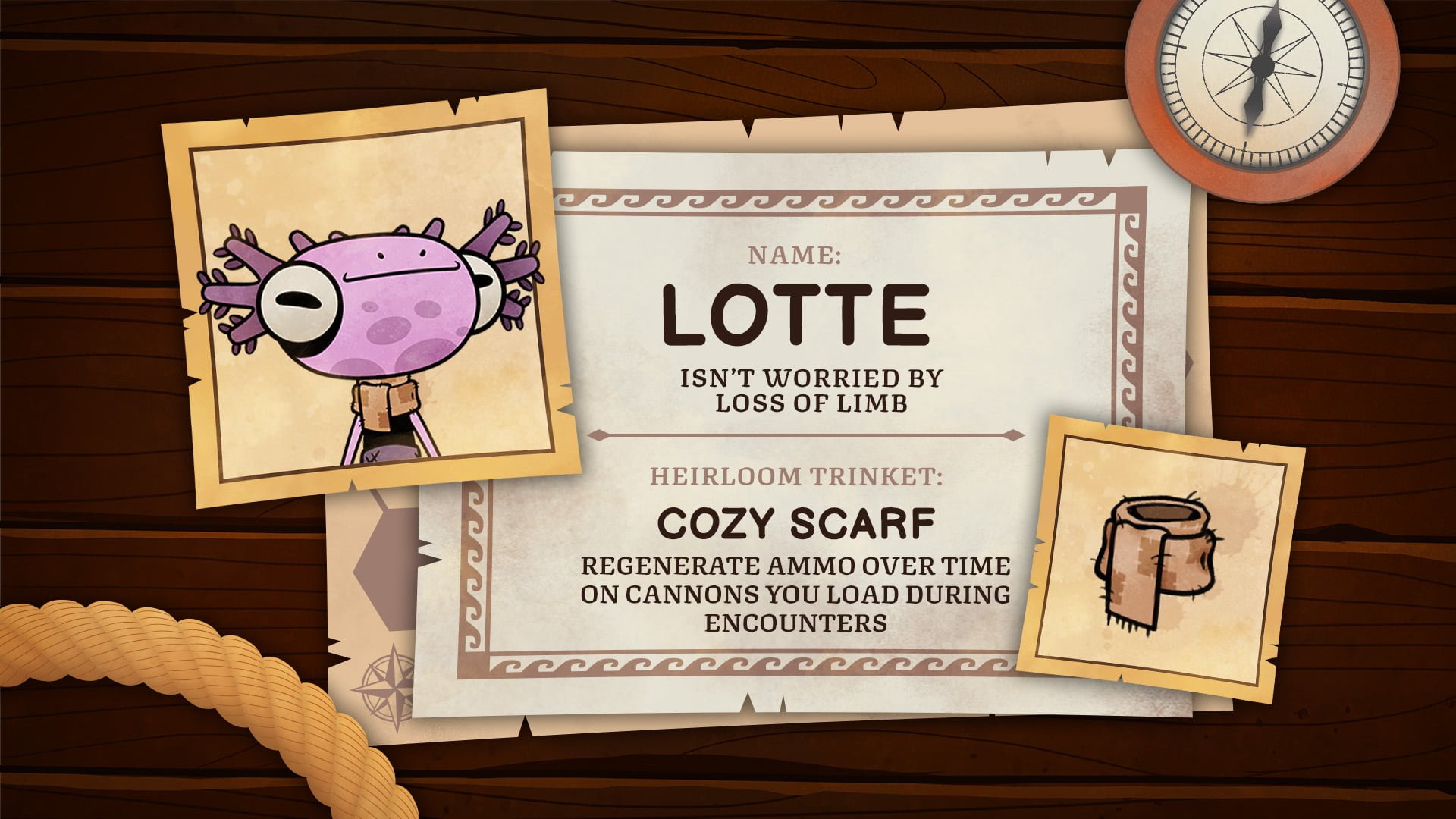 Insane starting trinket, some of the strongest ammo’s in the game seem to be the ones that are supposed ‘limited’ use, you load a double shot cannon and it will double the value of her passive as well.

Real power lies within loading planks, harpoons, and most notably, money, loading money essentially turns each run into easy mode, gaining well over 1000+ money before even completing zone 1, getting the gold to damage trinket essentially lets you one shot every enemy and boss in the game.

Coins and planks and harpoons also all shoot 3 shots base, so all % chance trinkets have 3x the proc chance due to each hit being treated separately

Best used with the double shot and grapeshot cannon, if you choose not to use those 3 items, the starter trinket is still quite strong with bombs and high capacity ammo.

Seems to scale regen speed based on ammo type and max capacity, so + capacity artifacts and trinkets are best with her 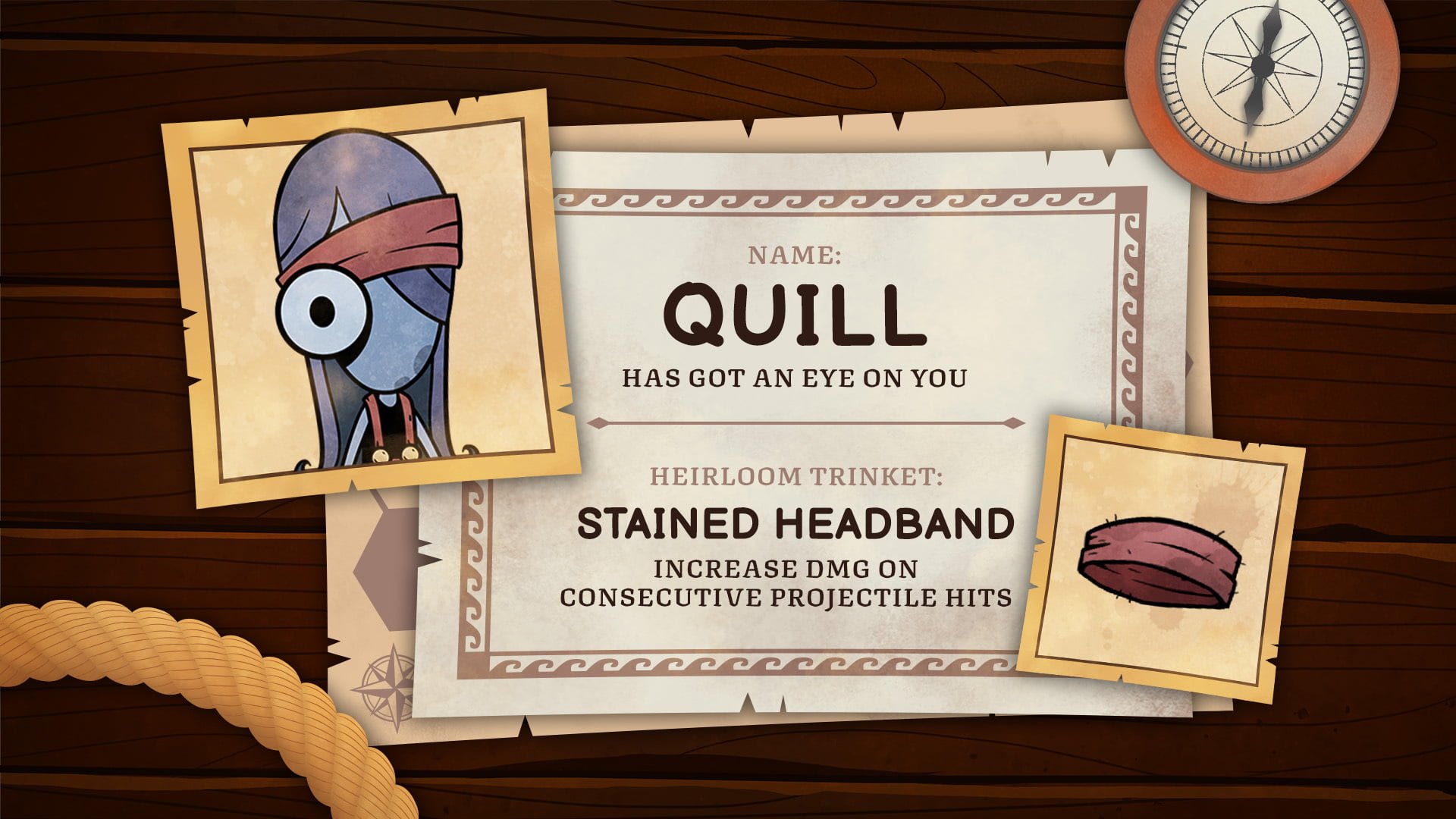 I can’t really decide if Hink or Quill is better at gunning so I’m putting them both in S tier, I havn’t fully figured out how her trinket works yet, but it seems to scale with targets hit, so piercing shots with say, the birds, will raise her damage by 1 for each enemy it pierces on the next hit, base damage increases are very strong in ship of fools, she seems to be less reliant than Hink on good trinkets but good gunning trinkets also don’t seem to be super rare

Really strong trinket once you get some trinkets flowing in, procs all the effects and splashes them in an area on crit, if you get the rage trinket almost every hit will be critting, many trinkets also boost crit chance by a small %, some with a high %, both Hink and Quill are good choices for gunners

Very strong trinket, you load the cannons, you or your gunner friend can shoot them with huge buffs, the damage and speed increases are very noticeable, kind of self explanatory, straight buff to any ammo loaded.

Best paddle user, fast attacks synergize extremely well with the artifacts and trinkets in the game,
repels boarders and melees quickly while your partner is cannoning, not really much more to say, can
get very silly quickly with some certain trinkets. 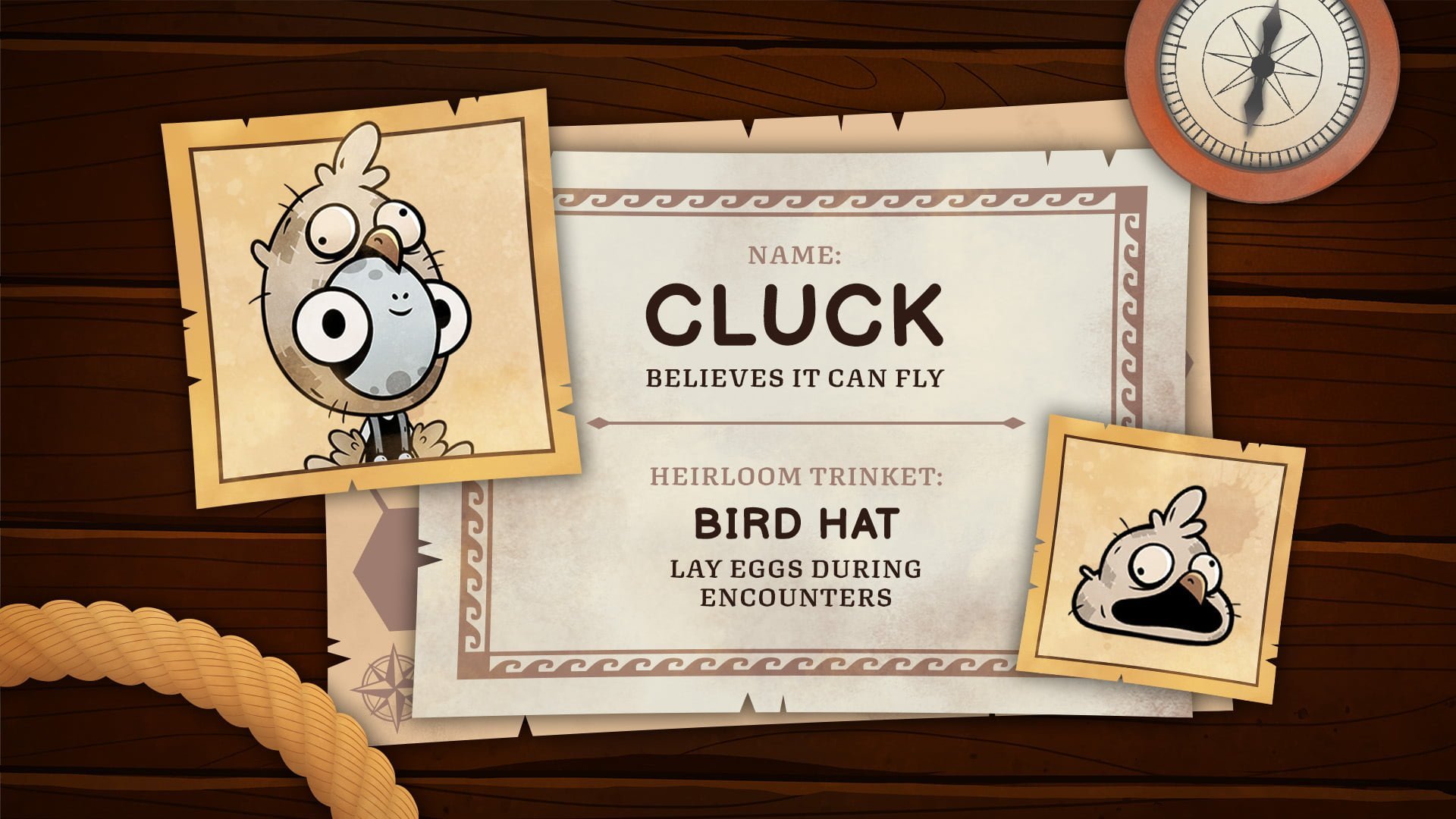 Lays all kinds of egg ammunition, also seems to function with egg related relics, seems to mostly be regular eggs, but eggs are very powerful ammunition, especially early, just RNG heavy on which eggs you get and when you get them, sometimes encounters end before you even get one on the super early stages.

Krillstoph is solid, trinket lets you repel melee attackers quickly in a tricky spot, only reason I put him here instead of A is because I think Todd is more generally useful if you’re picking a character specifically for paddle using based on the current boss fights we have. Nothing bad to say really just not particularly stand out.

Saves harpoons on use, REALLY REALLY strong with the right combination of relics and trinkets, but can be very RNG reliant to get those. I never really had a huge harpoon issue in runs, so the saving never felt big to me, Lotte kinda makes her irrelevant as well since the harpoon ammo loading works with all the trinkets anyway, could easily be an A tier solo if you get lucky, but otherwise nothing to standout. 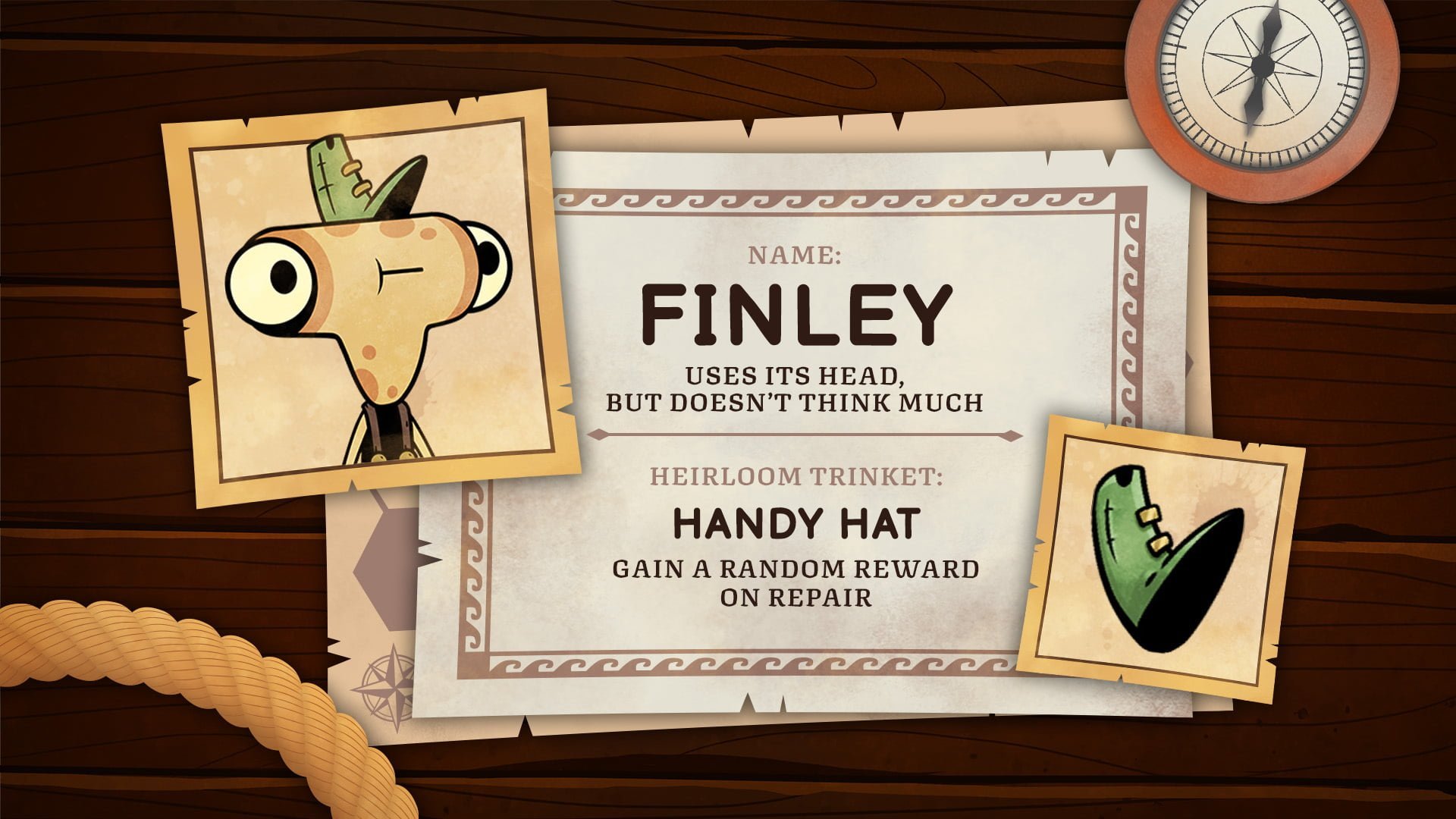 Finleys starting trinket has kind of a problem where you only really gain benefit from it when your ship is taking damage, which is what you’re trying to avoid, seems to mostly give money and harpoons, but also can give things like shields as well. Has basically the only starting trinket in the game that doesn’t have constant value throughout the run, if you’re avoiding damage you’re not getting any benefit. 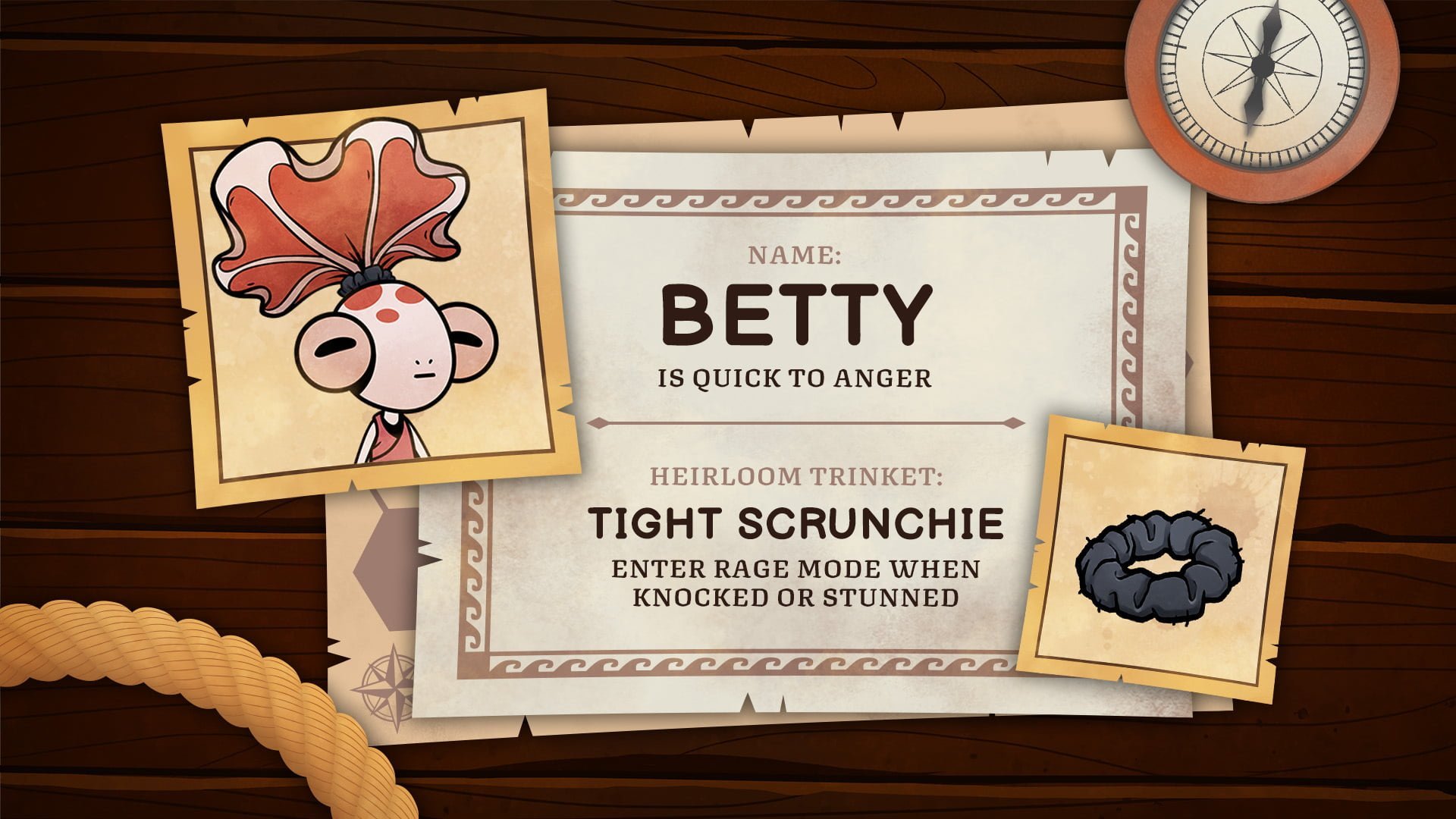 Similar issue to Finley, grants rage for a few seconds on being stunned or knocked down, useful if your partner is hitting you triggering it, kinda the only D tier in solo, you have to have your partner spend time to trigger it which can be better spent generally just shooting. Good during times where you need to paddle and you step on eachothers toes. Rage is a powerful effect however, so it can be worth it to do, especially if you’ve been given bad luck early in the run. But generally won’t have very high up time.