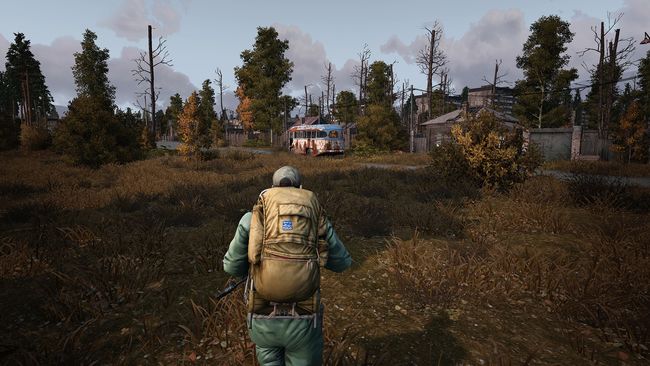 Skills can be reset for free once a day.

Loot in the entrances and boxes on the map and other

It is advisable to have a flask and not a single
Well to be filled, or sometimes it’s not in columns and you can replenish it from a river or collect dirty water. Are there places where water is not sold!

Artifacts can be used to equip yourself with a belt, they are also needed for quests, and some of them can be sold to scientists for 800 as 80,000+ more rare are more expensive

Items that can be sold well on the board and not only
Parts of mutants that are best sold on the board: The head of a bear, Skin of a bear, wild boar skin, Skin of a dog, Bling tongue,amulet of the witch, paws verliok, Brutus bones

Parts of mutants that are best sold to scientists in Map of the Lubech’s OutLands (M11-4): meat, fangs, legs, hands.

Items that are needed on an important quests are best sold to people on the board: 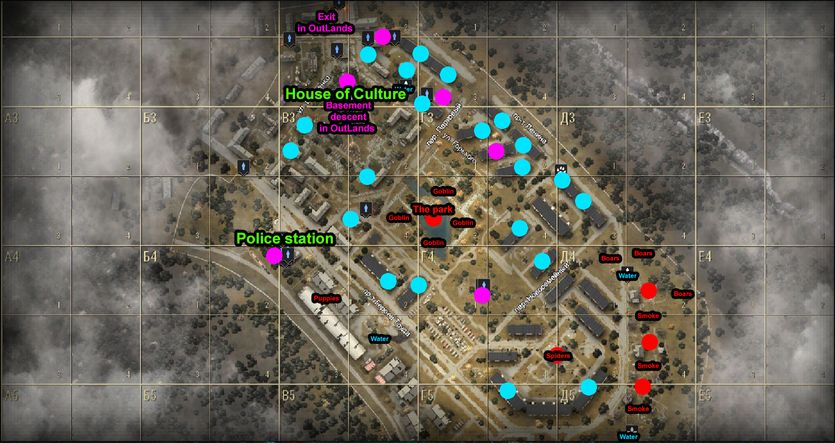 Map of the Lubech’s OutLands 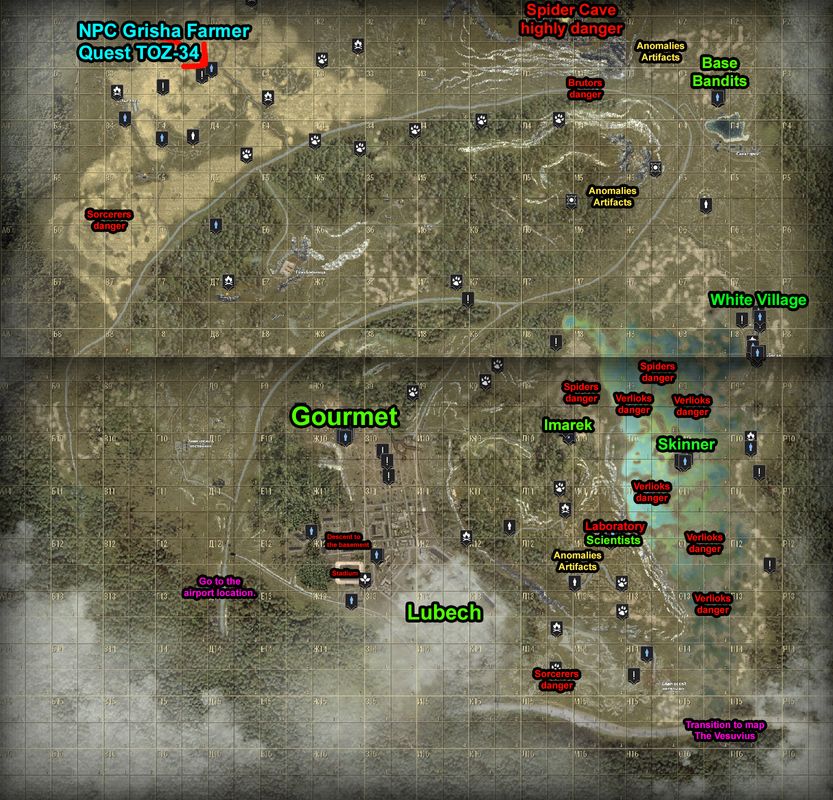 0. (Ж10-2) Gourmet is the main trading point of the Lubech’s OutLands. 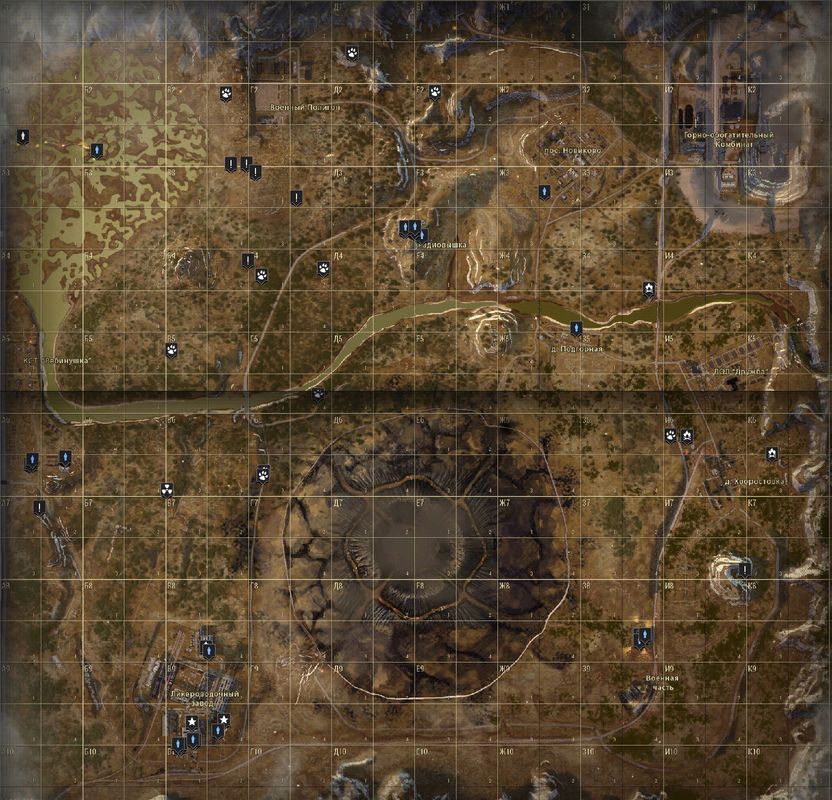 How to get the weapon (Mosin rifle)

You need to do the quests of the bald one who is in the square (H14-1). A bald series of quests for one of which gives a Mosin rifle.

The bald one will ask him to bring him three artifacts, screen B. can they be bought on the board or bought from traders or found in the anomalies using MGD.

How to get MGD (artifact collector device)

He will need to bring a lot of different parts and trash. buying them is not profitable; it is better to find them in the entrances of houses; even small wooden houses still exist in various hiding places on the map.

The first most reliable and affordable weapon in the game is the TOZ-34 rifle, which can be obtained during the execution of the stew for the gun.

To get the above task, you need to go to the location of the Lubech’s OutLands and find Grisha Farmer in Д3-1 square, do a little quest in a couple of minutes and get TOZ-34, after you have received don’t give it to Grisha Farmer! Do not complete the quest or cancel it.
How to get the weapon (TT pistol)

How quickly pass the Station “Lesnaya”

Overcoming location abandoned warehouse and being on location station “Lesnaya”, turn around and take things out of the box, which lies on a concrete block as a result of completed job to pick up their things.

Next, go through swamps, in squares Д5-Д6, to a station in a square Д7-4. Along the way, equip knife and revolver Nagant, who immediately charge and directly moving through the swamp, collect 3 Calamus, but at the first intersection of the marshlands to get stuck on the collection of sweet flag is not necessary.

When they reached the station, just talk to your character Caretaker and take his job Please Watchmen: copper wire. Then go to the huckster from the station and talk to him, take a job in Ljubech: Service huckster.

Go to the southern part of the square Д6-4 to find there the copper wire on the instructions Please Watchmen: copper wire, and then move to the north-east corner of the square Ж6-1 to pick up the artifact to define in Lubech: Service huckster , charge on the way and equip issued huckster MGD.

Taking out the anomaly artifact back to the station, the square Д7-4. Immediately go to the Watchman and complete the job request Watchmen: copper wire, after a talk with the huckster and complete the task in Lubech: Service huckster. Taking the huckster job in Lubech “recipe” for the guard , go to В5-1 square, where you have to find the character of Vladimir Ilyich. If currently not in stock 3 Calamus, it is necessary to move the specified square through the swamps, where already, and you need to collect the required number of Calamus.

Reaching the Lenin talk to him and as a result it will give a couple of his job. After that you need to talk to him again and say that you have come at the request of huckster from the station. Following the results of the dialogue mission in Lubech “recipe” for the guard must be renewed, and you will need to go to the square and Г6-1 kill 2 dogs, which must be to cut (required Armed with a knife) to get 2 pair of dog’s ears.

Having obtained the ears, back to Vladimir Ilyich and give them to him, and then go to the eastern part of the Д5-1 square, where in the yard near the fence next to the doghouse get embedded in the ground and put the can back earlier found Air marsh.

Once Air marsh is in cans, head to the south-eastern sector of the square to the Г5-4 clumsy big tree. Next to find a tree root Ira you want to pick up and carry to Vladimir Ilyich.

Giving root Ira Ilyich, go to the huckster and report back to him on the work done as a result of the job in Ljubech “recipe” for the guard is complete and will be given a job in Ljubech: permission for Kochegarova.

Go to the square Г8-4, the western tunnel, and talk to Misha Kochegarova about travel in Lubech, resulting in completed assignments in Ljubech: permission for Kochegarova and Forced to hunt , and the character is on the station platform at locations Lubech.

To create a group you need to invite any stalker:

Written by FAQGAME by attack