The barebones of getting started and other dumb stuff. 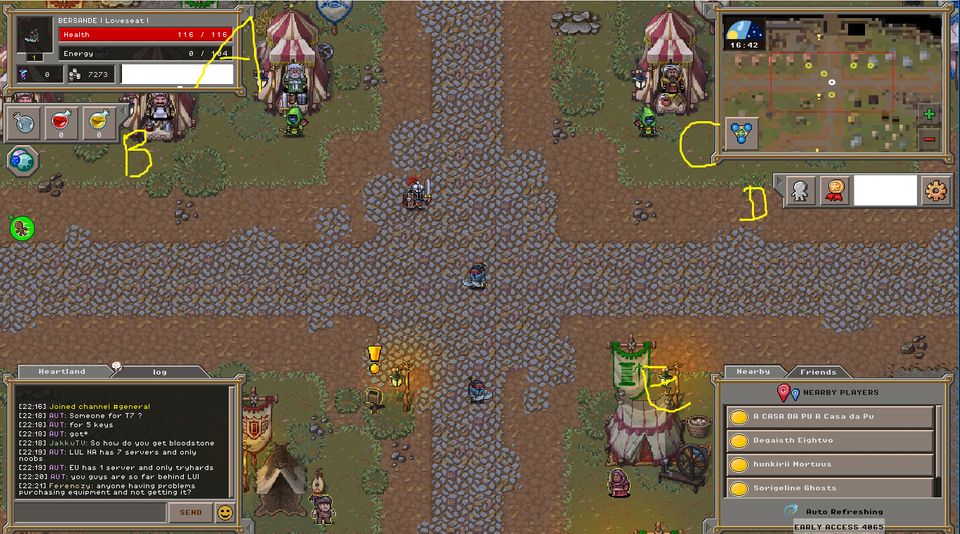 B Section
Red Potion: Recovers HP
Pee Potion: Recovers Energy
I’m not experienced enough in this game but from what I’ve seen there’s no real place to buy potions. From playing it seems like you find them randomly in chests in dungeons or from daily rewards. This means that you have to actually not try to die and wait a while when you’re hit to recover HP.
Gem Button: Don’t worry about this

C Section
Map: I’m not explaining this.
Time: Hurrrr
Blue Triangle: Your free warp back to town when a shrine isn’t near by. Has a cooldown on it so remember that.

D Section
Grayman: Your character page that shows your stats and equipments. Can click Q to open it too. Click Materials to see what items you have and the various other equipment boxes to see what equips you got as well.
Medal: Shows you what challenges/achievments/quests you completed. Do these to get points to spend on skill cards once you die.
Cog: Settings

E Section
This is how you’ll actually be able to friend people you find near you.

Chat Box
This is how you talk. It shows the chat to every single yellow dot you can see in the current map meaning you can send Poop emotes to everyone in the world map/dungeon. 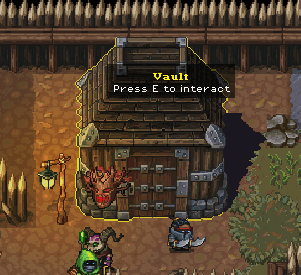 The Vault
Put items in here that you don’t want to carry on you or lose should you die. Any items you put in will carry over between character deaths so store whatever you want, from money to keys to gear. Only has 20 slots to store stuff thought to choose wisely.

The True Game Begins
Now you’re finally ready to play the game but what exactly are you supposed to be doing? Stop thinking that just go out into the wilderness and kill stuff until you feel like resting for a bit. Point of the game is to get your character to level 25 so you can die at the The Well underneath the city and use points you got from Challenges on cards you got as well so you can eventually become a God. There’s still some other stuff to know but I’m not writing stuff up for the whole game for now, only a few things required.

Gearing
You can buy gear from the Auction House, craft it to the tents in town or found them from killing bosses in dungeons. Usually partying with people in dungeons will give away gear if you just ask nicely enough.

Partying
There’s no way to click a person and send an invite to party up with someone. Partying is done simply by being near a person and killing stuff together. When a mob dies in vicinity to a group of people everyone will get the whole amount of experience meaning if you’re a nice lv 25 guy you can bring a level 1 with you to a higher level area and quickly level them since they’ll get the experience from the mob as well. So just find some wannabe loner out in the map and walk with them while killing for extra exp.

Dungeons
A person uses a key and for a short time people can enter into the same dungeon map. I’m not sure there’s a limit but I was in a dungeon once with 8 people, very nice and fun seeing the amount of bullets we were shooting. At the end is a big boss you kill for exp and items.

How to Get Key? 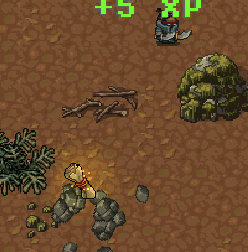 Either buy some keys in town or kill mobs within a region to make them drop a scroll. This scroll gives you a mission to kill an elite mob somewhere near you. When you kill an elite they’ll always drop money and potentially a key for the dungeon of that area.

Level 25
You finally hit 25 now what? You can either keep playing on that character or if you want to reset your character and reap rewards you can go to the The Well. It’s located underneath the main town and south a little bit. It’s an endless battle where you fight Wraiths that kill you for lik 500 hp or so. If you can kill them then you get bonus points for cards. Dying here will give you a new character to use based on your class and one extra inventory space (There might be more rewards but I’m too busy farming points to check other stuff)