Playing fair? That’s why you’re struggling. Learn to leverage the enemy racers against the track, exploit their simple AI, and even knock them out of the running for good.

“A fair fight is the result of inadequate preparation.”

– Luis Resto, The Art of War

If you are hemorrhaging salt over the Quintar Race, it is because you are playing nice when you shouldn’t be. Instead of trying to optimize your route and practice landing 6 perfect jumps in a row, you should aim to neutralize the other racers or, better yet, leverage them toward giving yourself an unsportsmanlike advantage. Every single one of the 5 courses has an opportunity for dirty tricks, be they shortcuts or opportunities for offensive driving, that will guarantee a 1st Place victory no matter how genetically unimpressive your Quintar is.

I include images where appropriate, to give you the most exact guidance about each exploit. My objective here is to completely erase all whining about Quintar Race difficulty, forever, and replace it with smug satisfaction and heavy sighs of relief. (And yes, each screenshot will feature me riding a pitiful Red Quintar, as proof that even the lamest rides can pull off these stunts.)

Scripted Waypoints: Each race features 3 computer-controlled Quintars competing with you. They are not randomly-generated; each race has a Designated Loser, a Designated Runner-Up, and of particular concern to you, a Designated Winner. Their AI paths organically toward invisible “waypoints,” and follows them in a precise sequence, without skipping any in-between. Without your interference, each racer will perform the exact same motions, in the exact same sequences, in every race. This predictability is a vulnerability.

No Problem-Solving Ability: A Quintar moves in a straight line toward its next waypoint. If the Quintar is somehow displaced into a position where an impassable obstacle is between it and its waypoint, it will spend the rest of the race pushing its stupid face into that obstacle, even if the obstacle is a 1x1x2 pillar that they could easily just walk around. This boneheaded fixation on waypoints is a vulnerability.

Halt and Jump: When an enemy Quintar’s “front fender” (their nose) makes contact with any solid object, be it a wall or another racer, they will always jump. Note that they do not anticipate collisions: Their intent is to jump over the object, but because colliding with the object first causes them to decelerate to a complete stop, their jump will have almost no horizontal momentum. This incompetent collision response is a vulnerability.

Four-Car Pile-Up: Caused by securing the lead against the Designated Winner, then entering a narrow gap with a 1-tile ceiling… and stopping directly in his path. Upon collision with your rear fender, the racer behind you will begin to jump like a moron, unable to path around you. As he hops up and down, the preceding racer will slide right underneath him, causing the first victim to jump on the second victim’s head, while the second victim also begins to jump in an equally futile attempt to pass you. The final victim, our poor friend the Designated Loser, will soon take his place at the bottom of this totem pole.

Grandma Won’t Pull Over: Caused by orchestrating a Four-Car Pile-Up in a location where a full height totem pole cannot be formed for geographical reasons. The result is mostly identical: Designated Winner will let Designated Runner-Up slide right under him, and when you depart for the finish line, the Designated Winner will be incapacitated for the remainder of the race, just as above.

Your first objective is to secure the lead. Run east for about 5 tiles (about where the sand texture meets the snow texture) to gain momentum, then sharply change directions to northeast. You are aiming for the Designated Loser’s head. Jump toward him when you are ~1.5 tiles away from him. 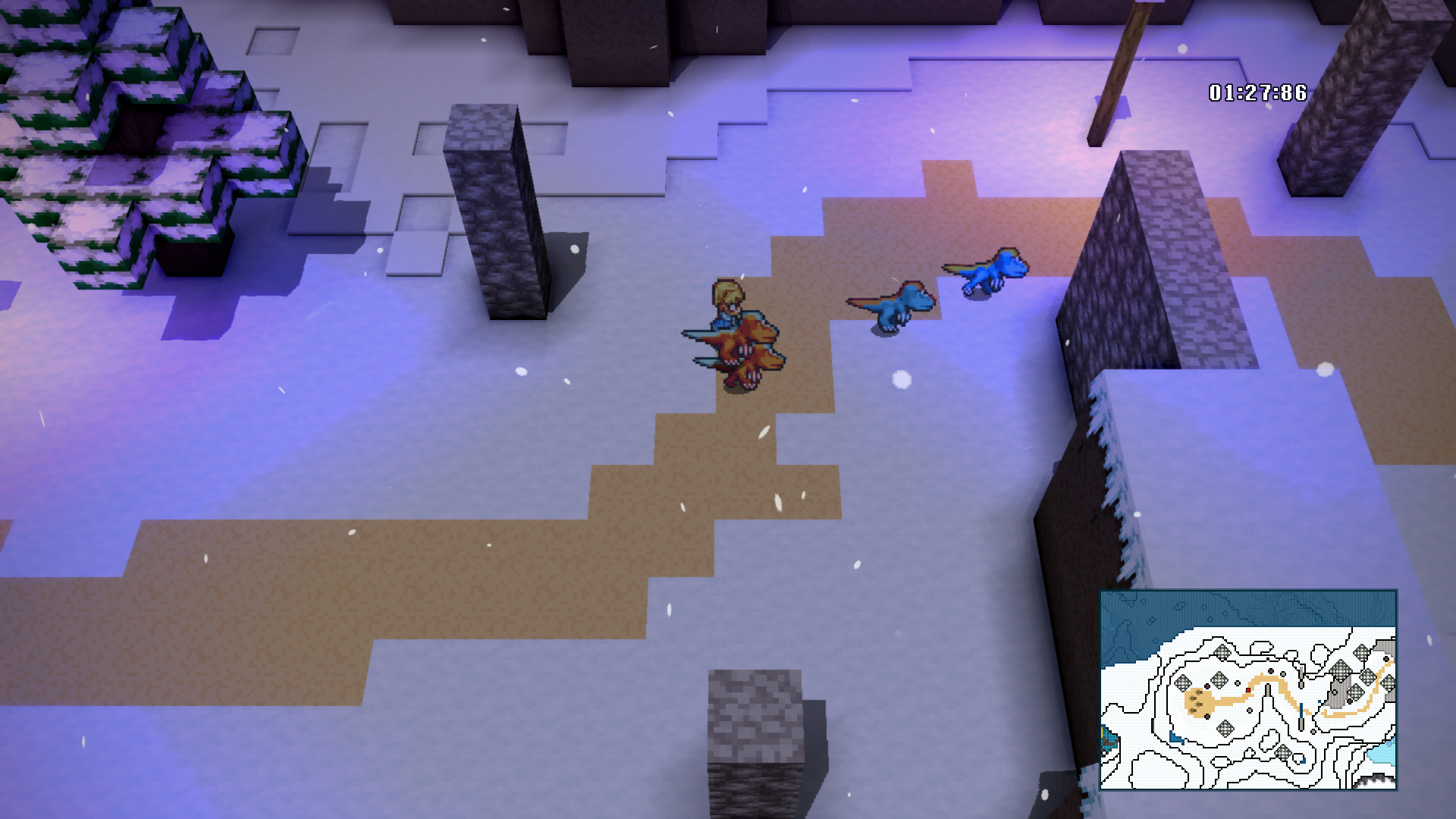 Wait patiently for a second until you round the elbow corner. Dismount the Designated Loser and run straight through this narrow gap. Continue in a straight line and do not hesitate when leaping from the upcoming ledge; landing in the foliage of the pine tree is not necessary, it’s fine if you hit the ground. 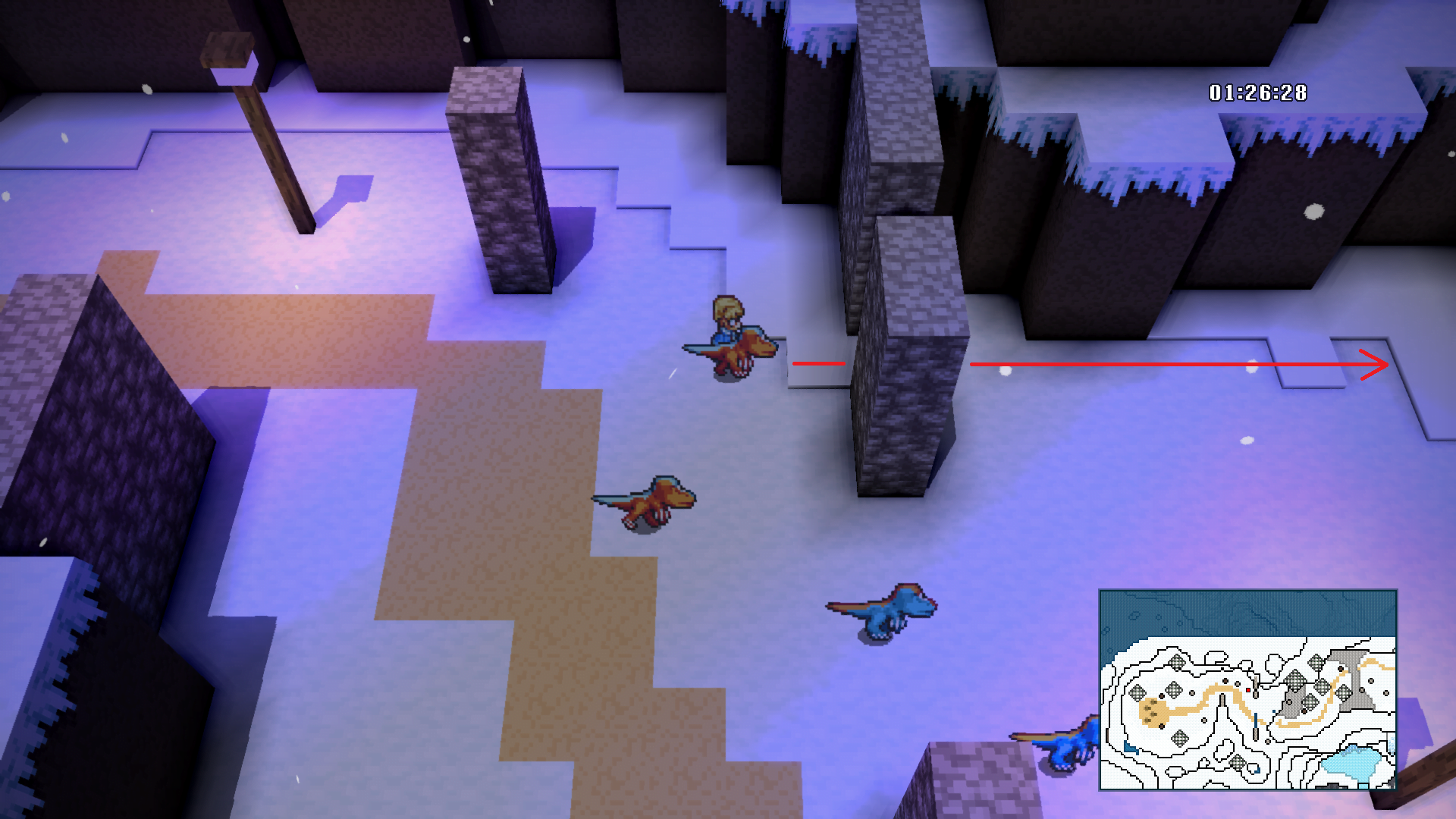 When you reach the entrance of the cave section, park your fat hiney at this position, directly under the entrance’s narrow 1-tile ceiling clearance. It will cause a Four-Car Pile-Up, a recurring victory condition in these race strategies. 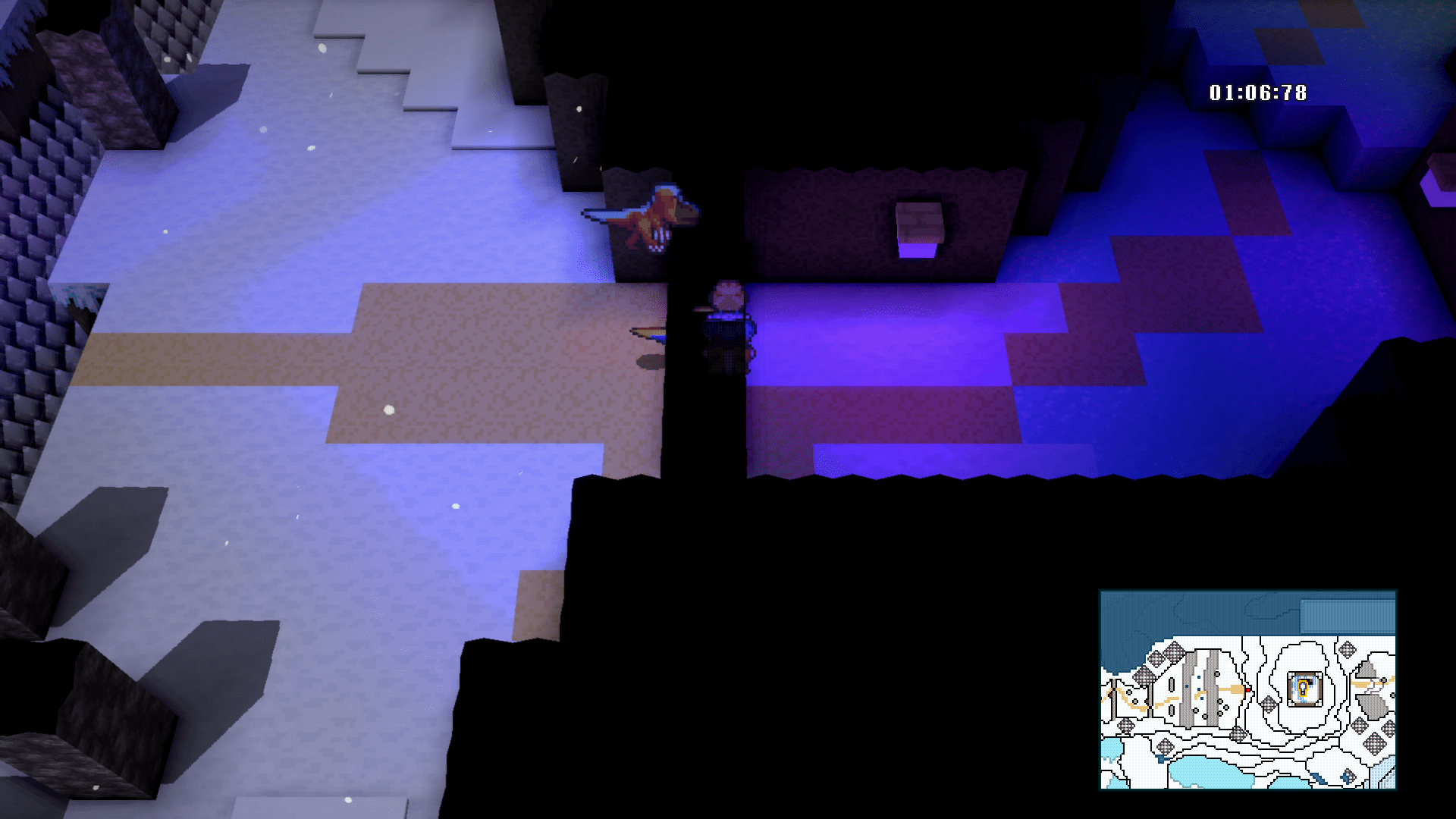 From this winning position, you may elect to finish the race normally, without any further cheating. 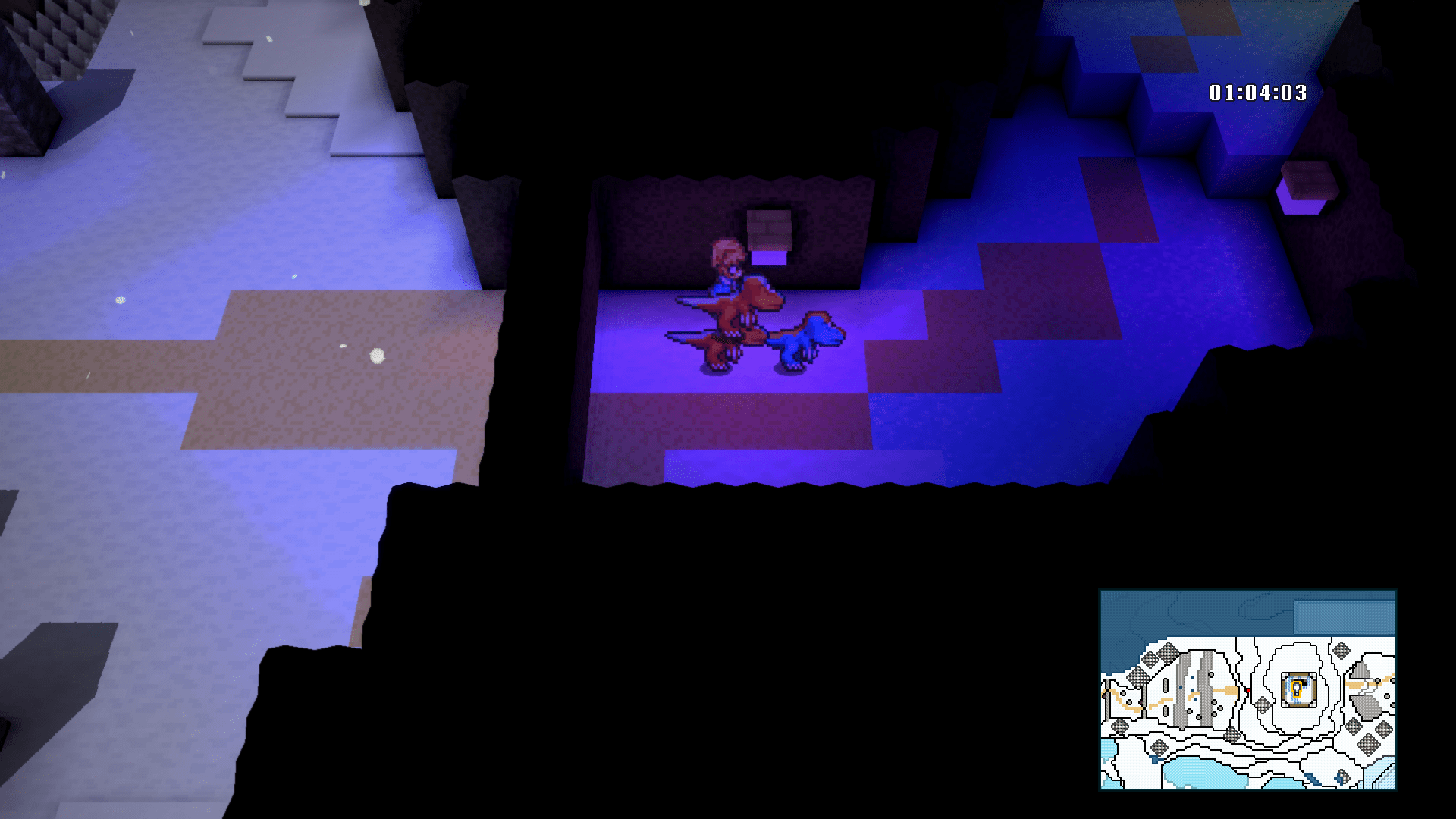 Your steed will politely carry you over the spike pit and around the first turn of the cave’s loop-de-loop. Dismount him to the east at the indicated position; most Quintars have a jump height of only 1 tile, but using your victim’s head as a platform, you obtain mighty 2-tile jumping powers, just briefly enough to win the race. 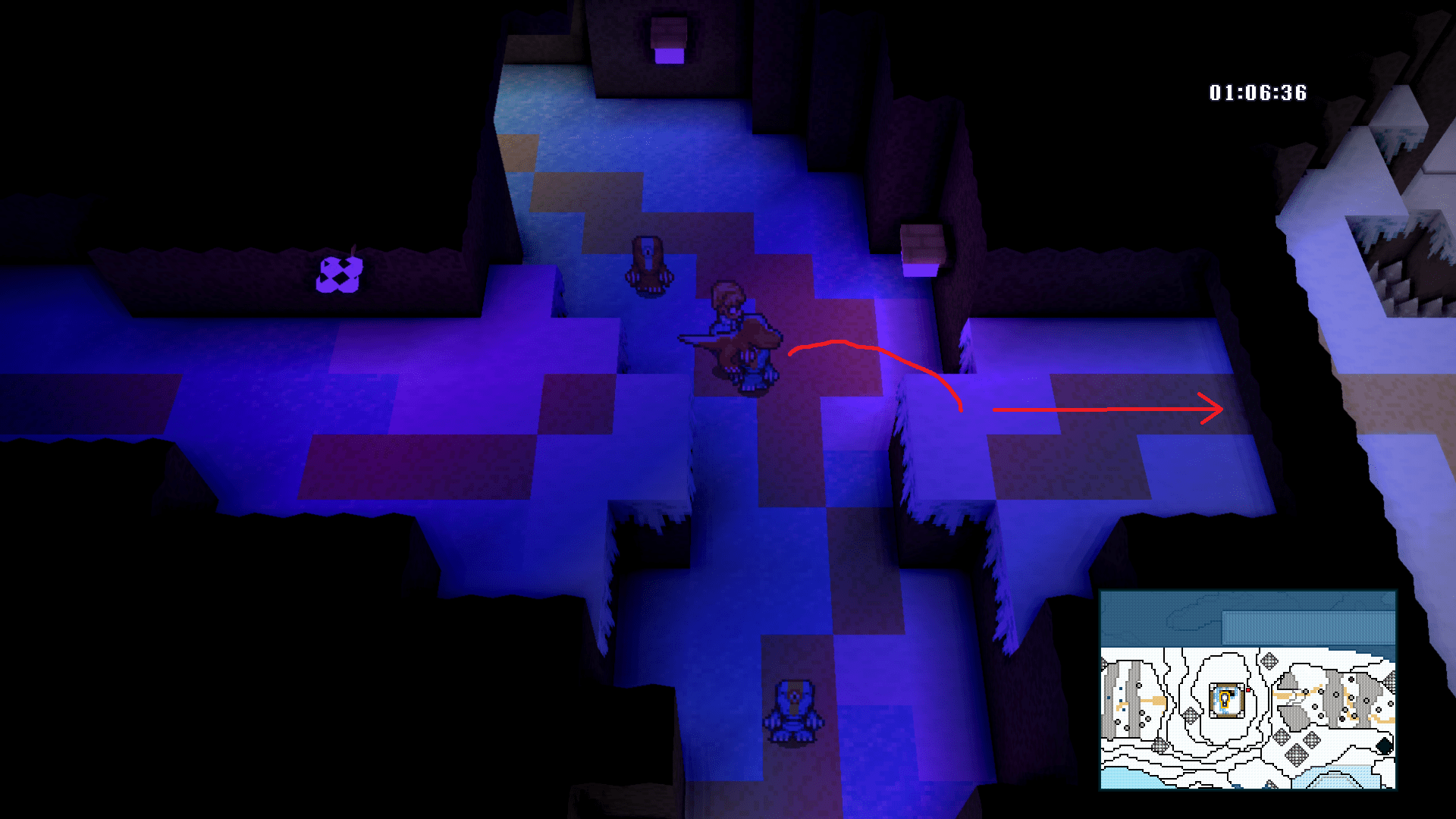 Successfully executing this maneuver will allow you to finish the race comfortably with no further concerns. Your lead over the Designated Winner will be several seconds long, more than enough time to win just by following the “slow” path highlighted by sand tiles. No tricky jumps across a sequence of uneven stalagmites, no threading needles at breakneck speed.

This course features the most comedic Four-Car Pile-Up, which occurs very near to the start of the race and permanently disables all three opponents.

First, run east past the first sand tile directly ahead, then immediately shift hard into northeast. Your objective is to clear this ledge as soon as possible, in an effort to overtake the Designated Loser and at least match the position of the Designated Runner-Up. It is not necessary to jump on any heads to accomplish this, but it’s fine if you do. 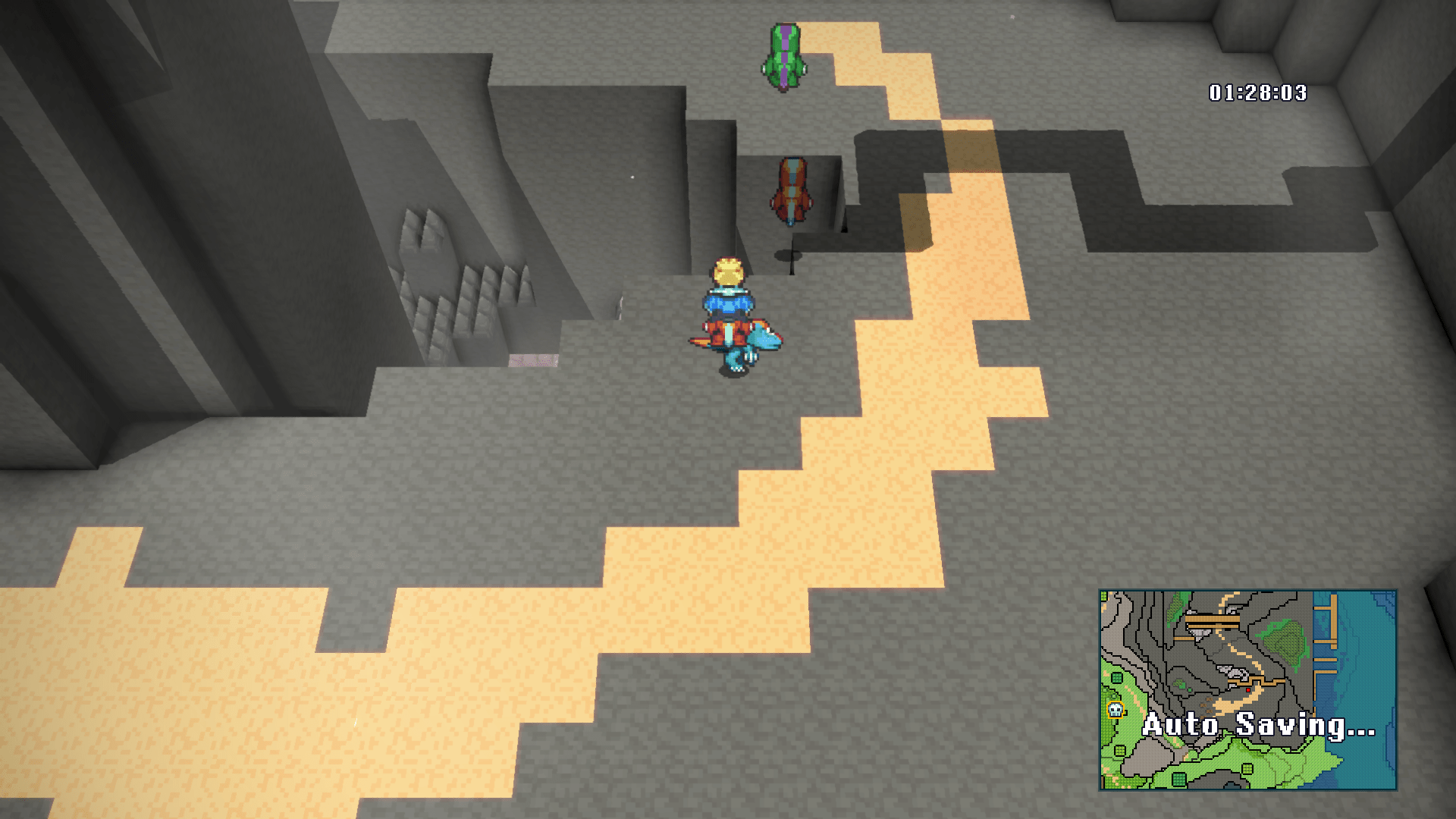 Immediately run straight northwest and try desperately to avoid collisions with the other racers. You are aiming to arrive at this position in the left lane, ducking under the horizontal wooden balance beam and jumping soon after clearing it, in an attempt to seamlessly hop over the sandy stair without losing momentum due to any collisions (with terrain or otherwise). 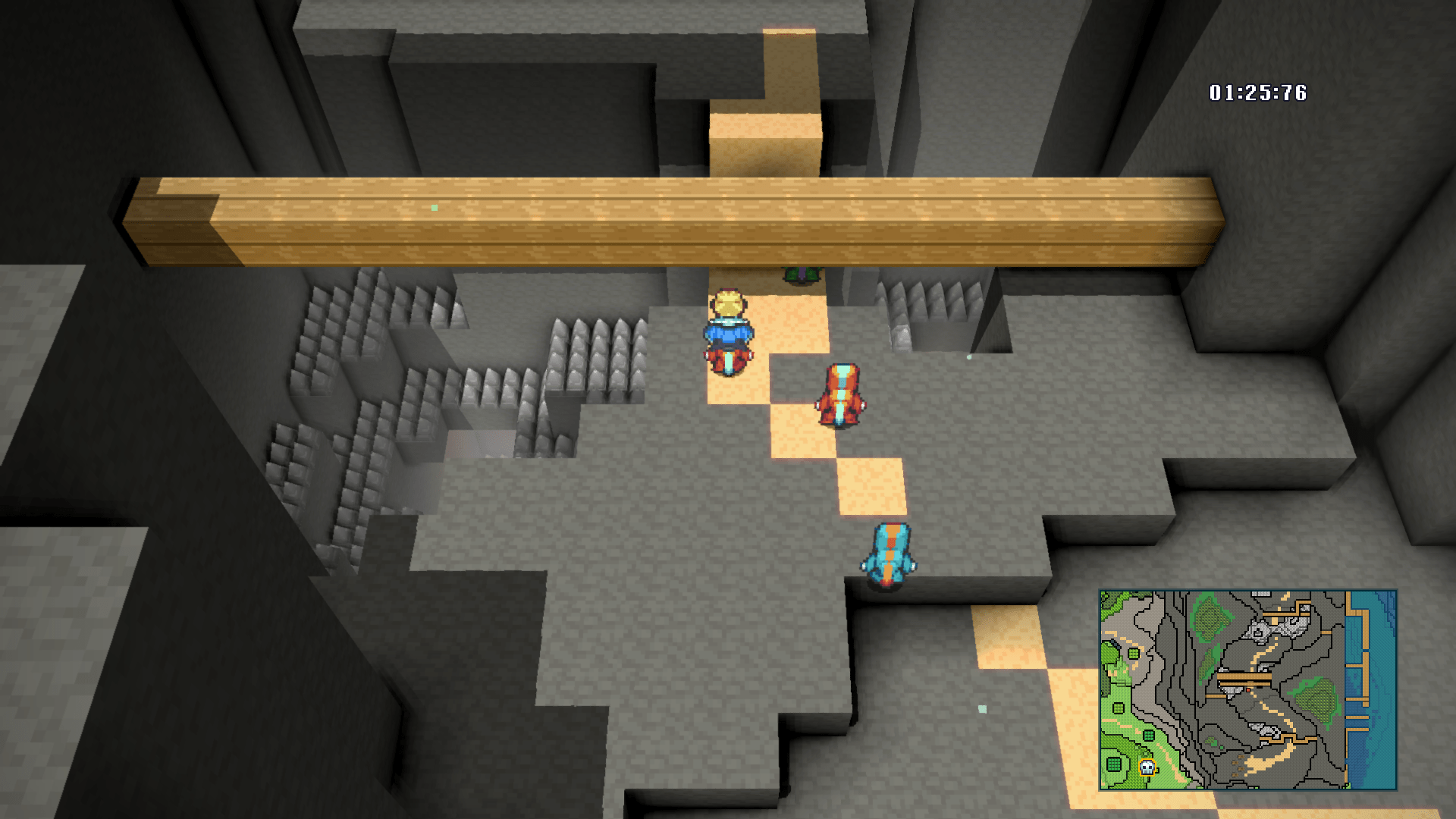 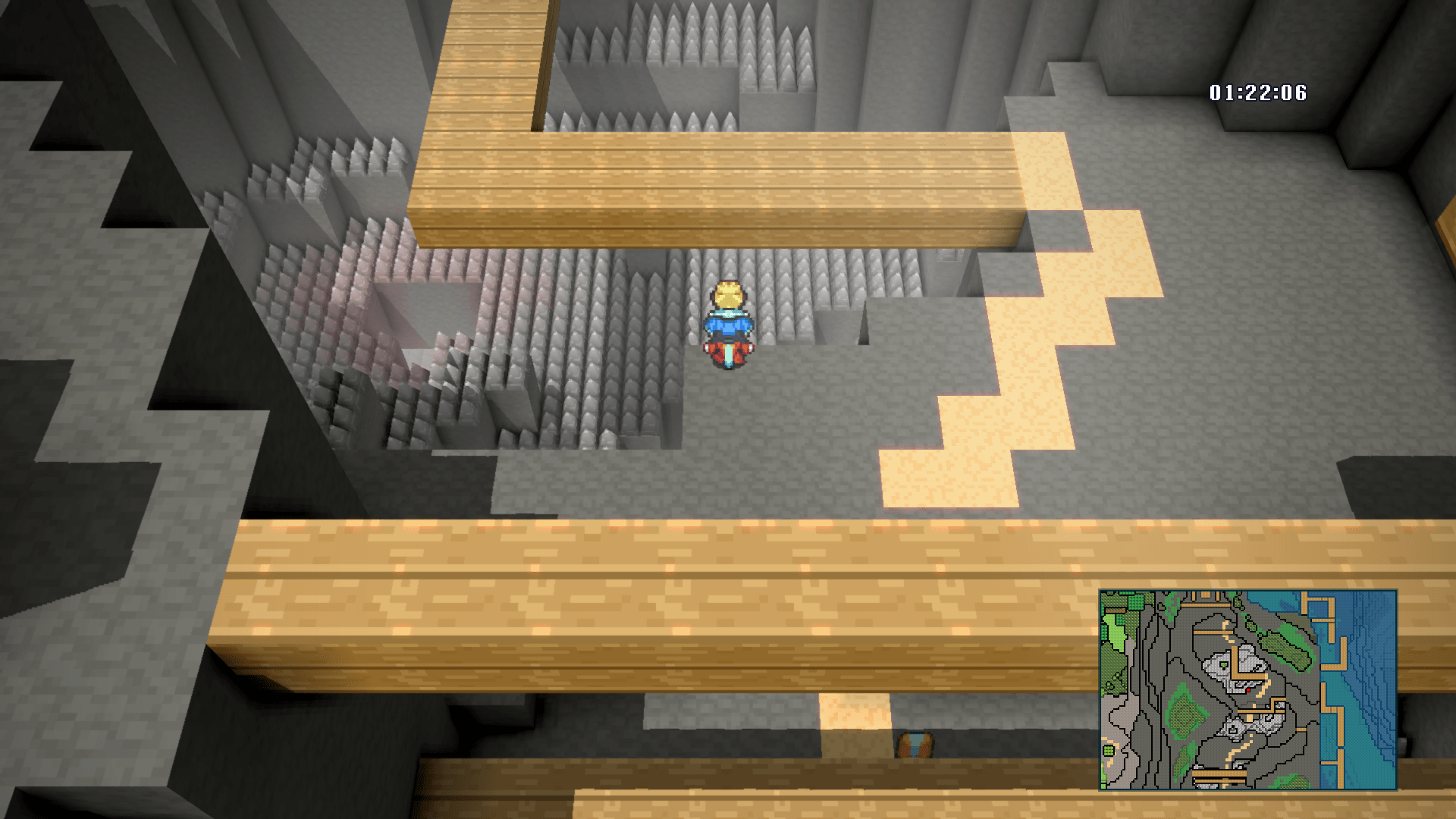 Now just zip over here, flush against the wall under the wooden balance beam, cut the engine, and prepare to laugh. 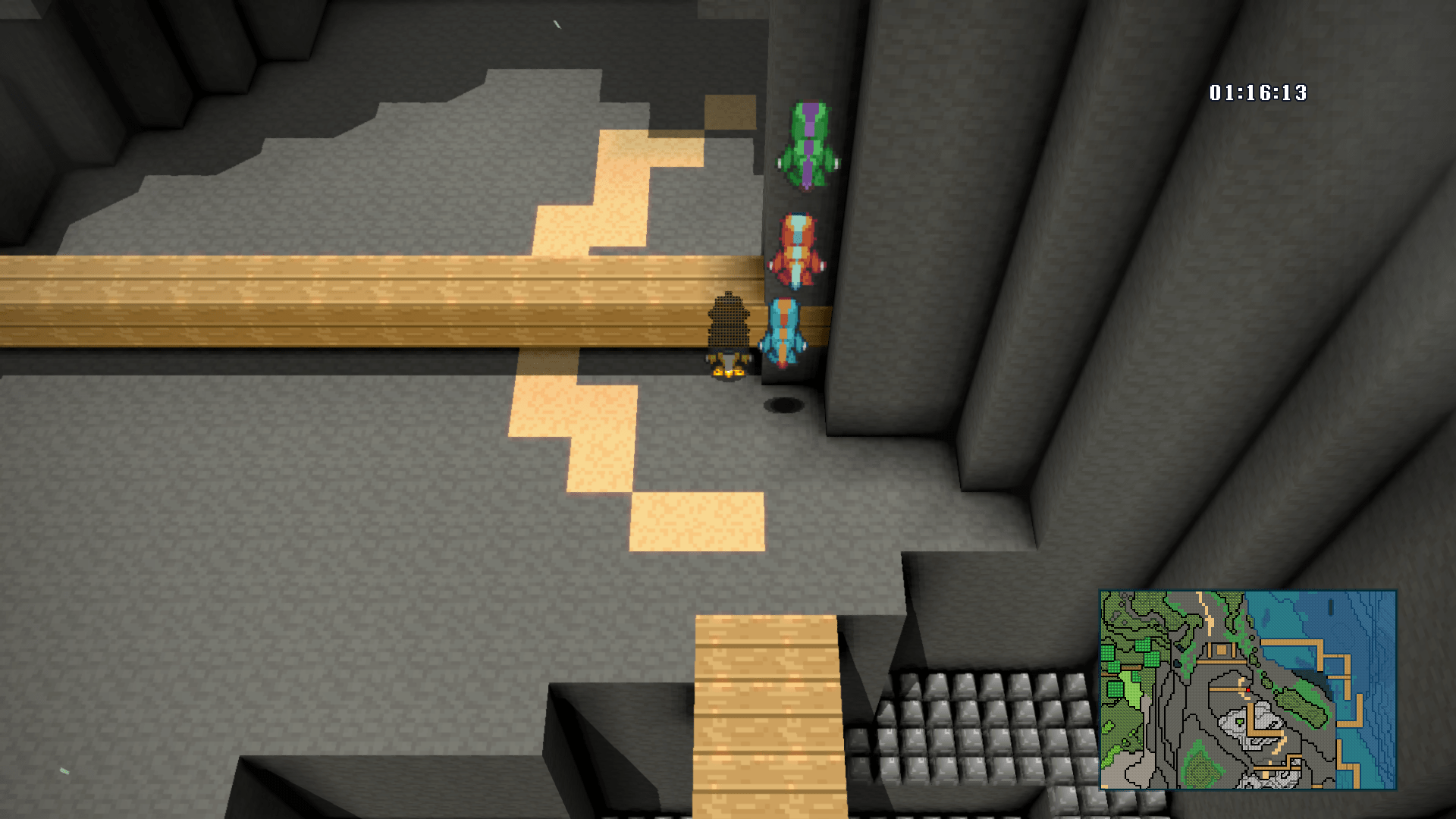 The racers are incapable of pathing around this deadly, impassable corner, due to their compulsive need to point straight at their next waypoint. You have secured so much free time that, in the upcoming section of balance beams overlooking a 300ft drop into the ocean below, you can slip up and plummet into the water (once) and still recover to win the race before time is up.

The Chalice of Tar

This requires no special effort on your part, no tricky jumps and no abuse of your fellow athletes. It is by far the easiest course and anybody complaining about its difficulty should be patted on the head. They need our sympathy most of all.

Flounder and bumble and suck to your heart’s content as you make it to this part, the beginning of the circuit around the lip of the Chalice: 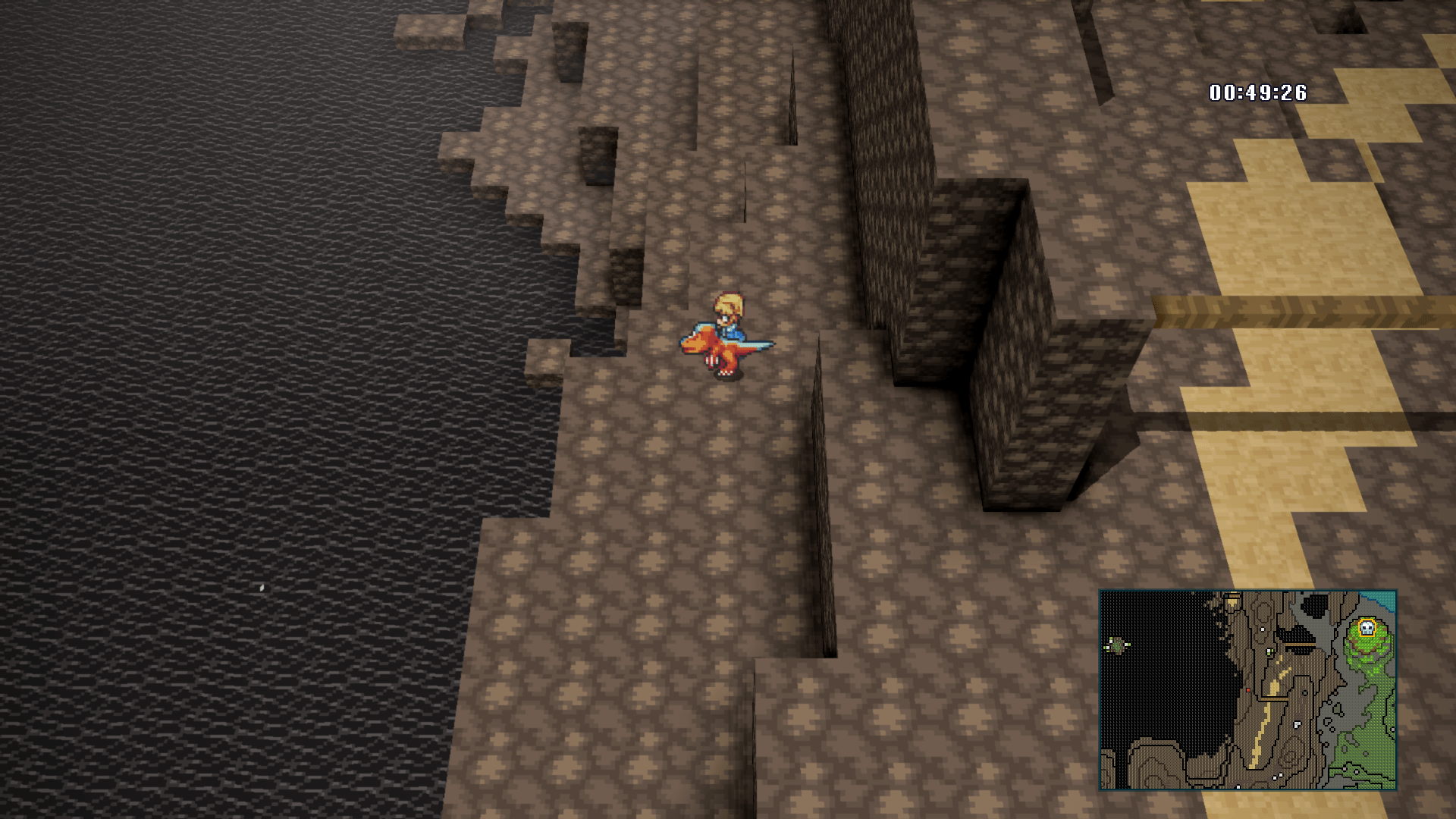 Yeah now just go that way, down that ramp. Just follow it up north/northwest. There’s a very conspicuous stairway that you ascend to get back on the regular track, at a place where you just walk straight to the finish line without any further jumping or navigating. Congratulations.

Okay, so, when people complain about the Quintar Races being unmitigated horse hockey, they are referring to this course in particular. And in this specific case I actually agree wholeheartedly. This race is entirely linear due to it being enclosed within an underwater tube of biscuits, which means there are no alternate routes whatsoever. Furthermore, the course is thickly laden with carpets of spikes, WHICH HAVE NO EFFECT ON THE ENEMY RACERS – they walk over the spikes with impunity, as if openly mocking you for having such sensitive feet. More than any other course, this one is offensively unforgiving to players who aren’t utilizing any sabotage techniques.

Anyway, an early Four-Car Pile-Up can be scored, and whereas it doesn’t tuck the opponents into bed like Eastern Chasm, it sets up a Grandma Won’t Pull Over that gives you much-needed breathing room to spend suffering against the awful “bouncy mushroom straightaway” hazard.

Begin with the traditional opening, “head east then sharply turn northeast and jump, aiming for the Designated Loser’s head.” All three opponents are in a relatively tight grouping and headed in a straight line, which gives you a brief opportunity to jump onto the Designated Runner-Up’s head from your current perch on the Designated Loser’s head, allowing you to quickly run overtop the Designated Winner’s head and land in front of him. This is the hardest maneuver I’ll ever ask of you, and unfortunately you may very well find yourself flubbing it and restarting multiple times. You are not alone in this, it really is super annoying. Send our beloved Mr. Willman an invoice for your steadily-mounting registration fees.

Once you succeed in taking this early lead, aim for this narrow opening and initiate a Four-Car Pile-Up. 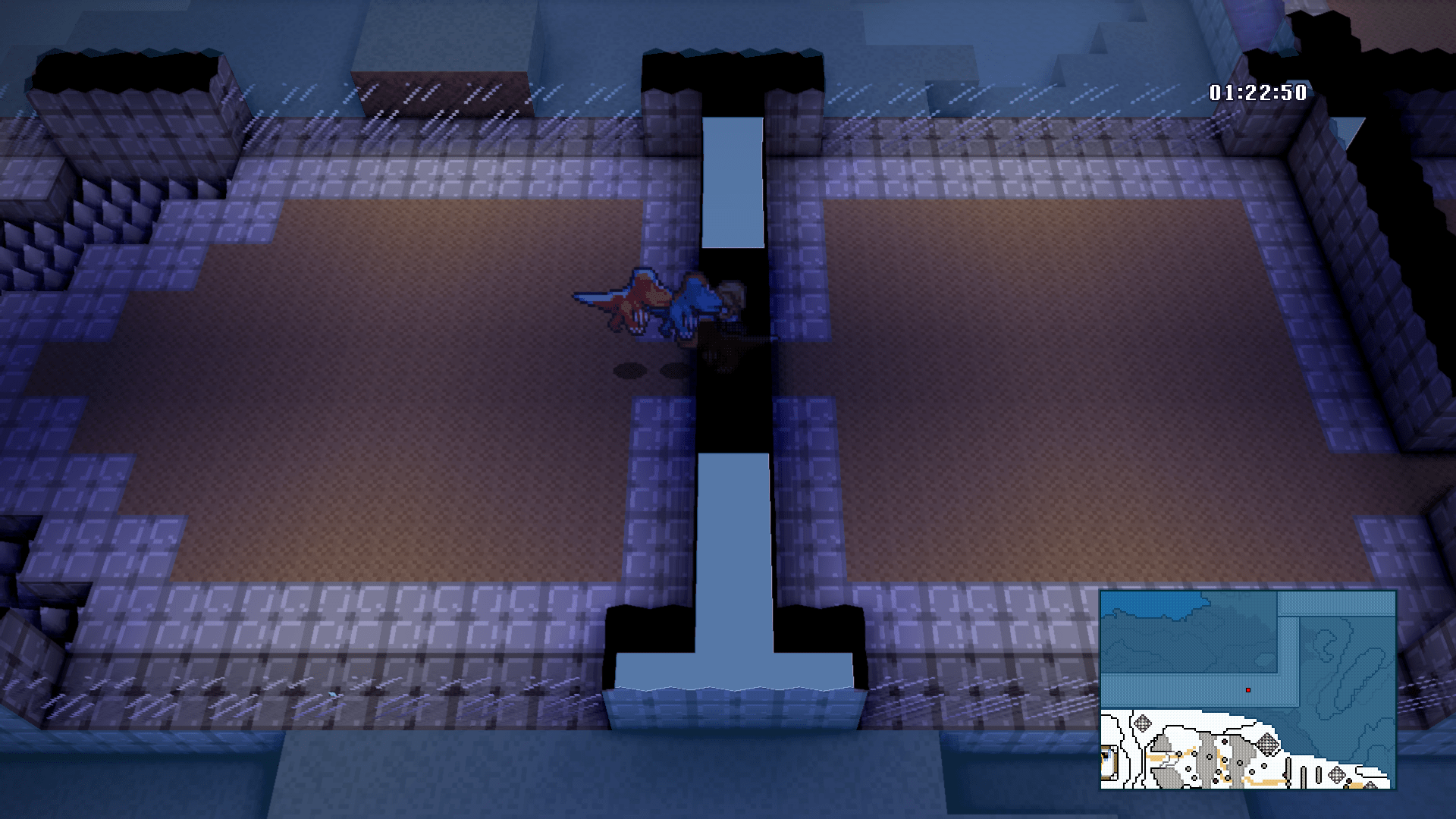 Don’t take off just yet! The Designated Runner-Up is immediately behind you, the Designated Winner is on his head, and the Designated Loser is headbutting the Runner-Up. You need to carefully inch forward, little by little, allowing the Runner-Up to slip under the madly-hopping Winner, then also allowing the Loser to slip under the Winner. By managing the precise sequence of racers in this manner, you will exit the Pile-Up with the Winner tucked harmlessly into the Loser’s pants for the remainder of the race, meaning you only need to contend with the Runner-Up. 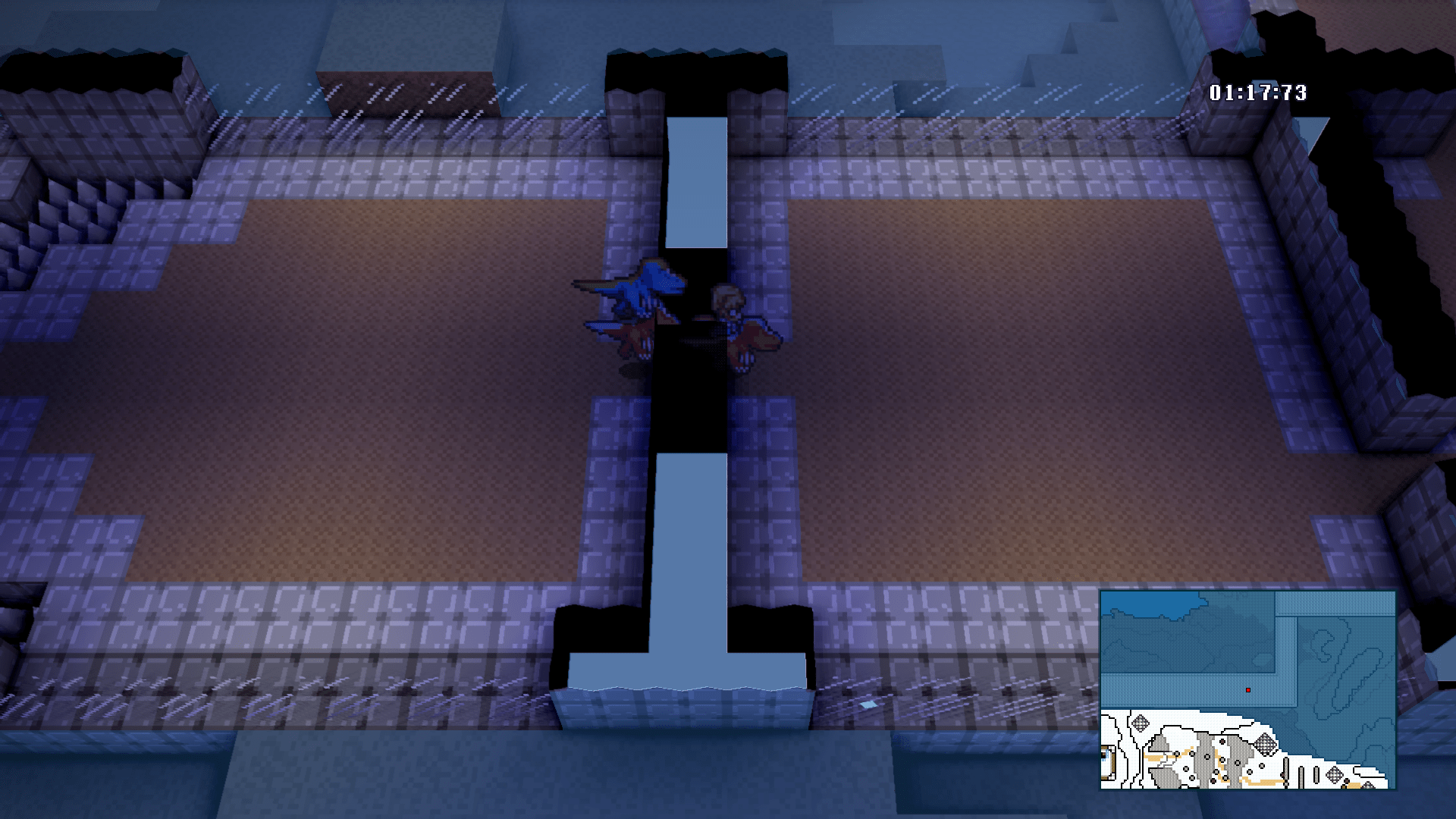 From here, I’m sad to say you’re in the best position you can manage. If you were hoping to surf across the awful fungus hazard atop the head of a hostage, I am sorry to report that they will force your head through the ceiling, causing you to clip underneath them and drop straight into the spikes below. I have been unable to clip into the ceiling so as to escape the course entirely, but even if anyone were to succeed, re-entering the course in order to cross the finish line would be impossible. I would say that a Desert Quintar’s heightened speed makes this course substantially easier, but, duh, that’s true of all courses. Good luck.

The last course is a welcome reprieve, requiring only one early jump to set up an easy win. Highland Quintars can also just skip it entirely by running north, clearing a simple 2-tile cliff, and prancing to the finish line having only spent twelve seconds or so to convert the 0.5 Gold entry fee into the 2.5 Gold prize money.

But for non-Highland Quintars, hold northeast as soon as the race begins, and hop directly onto any available head. 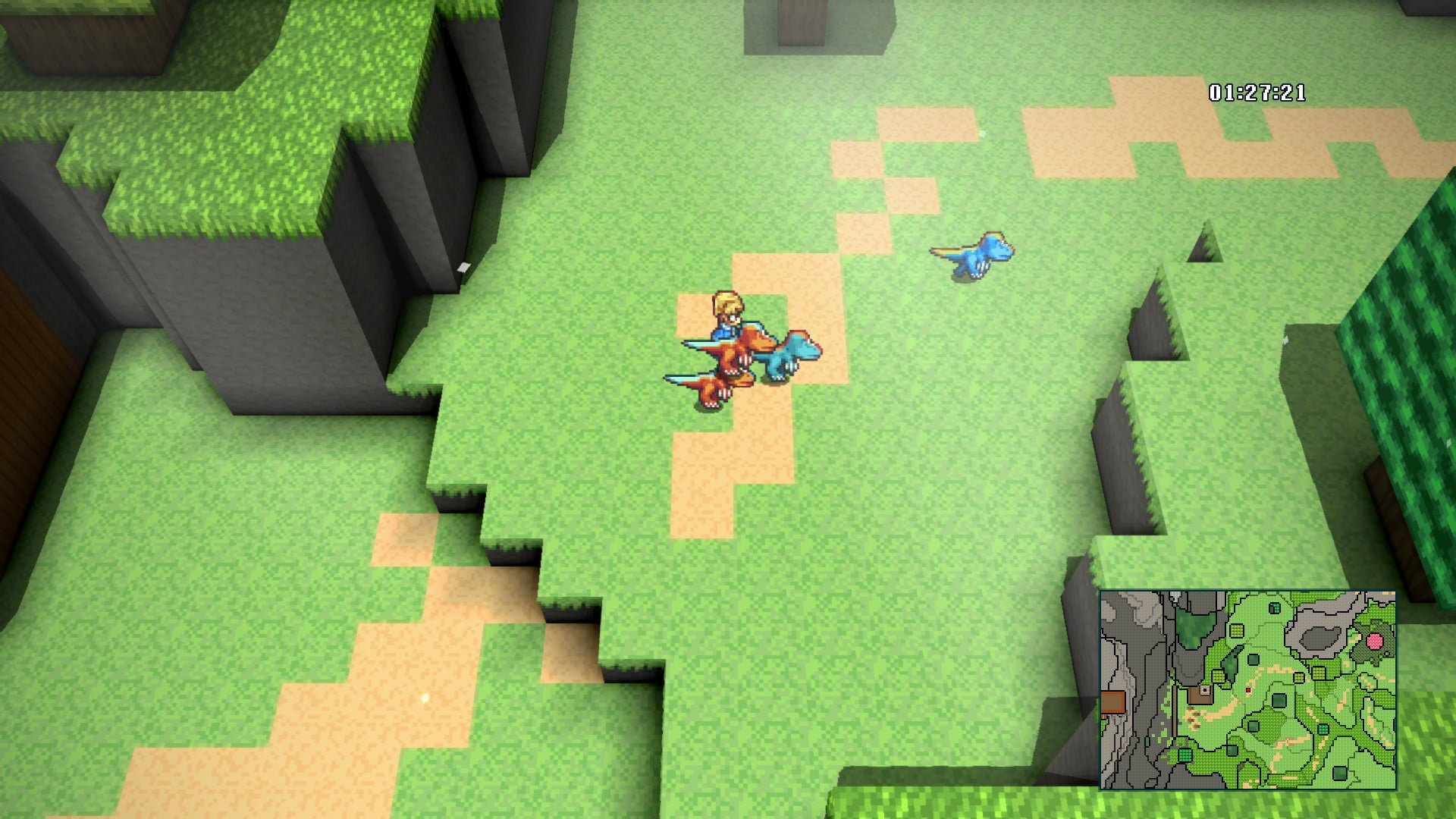 Dismount your friend by leaping to the south, onto this elevated mesa. 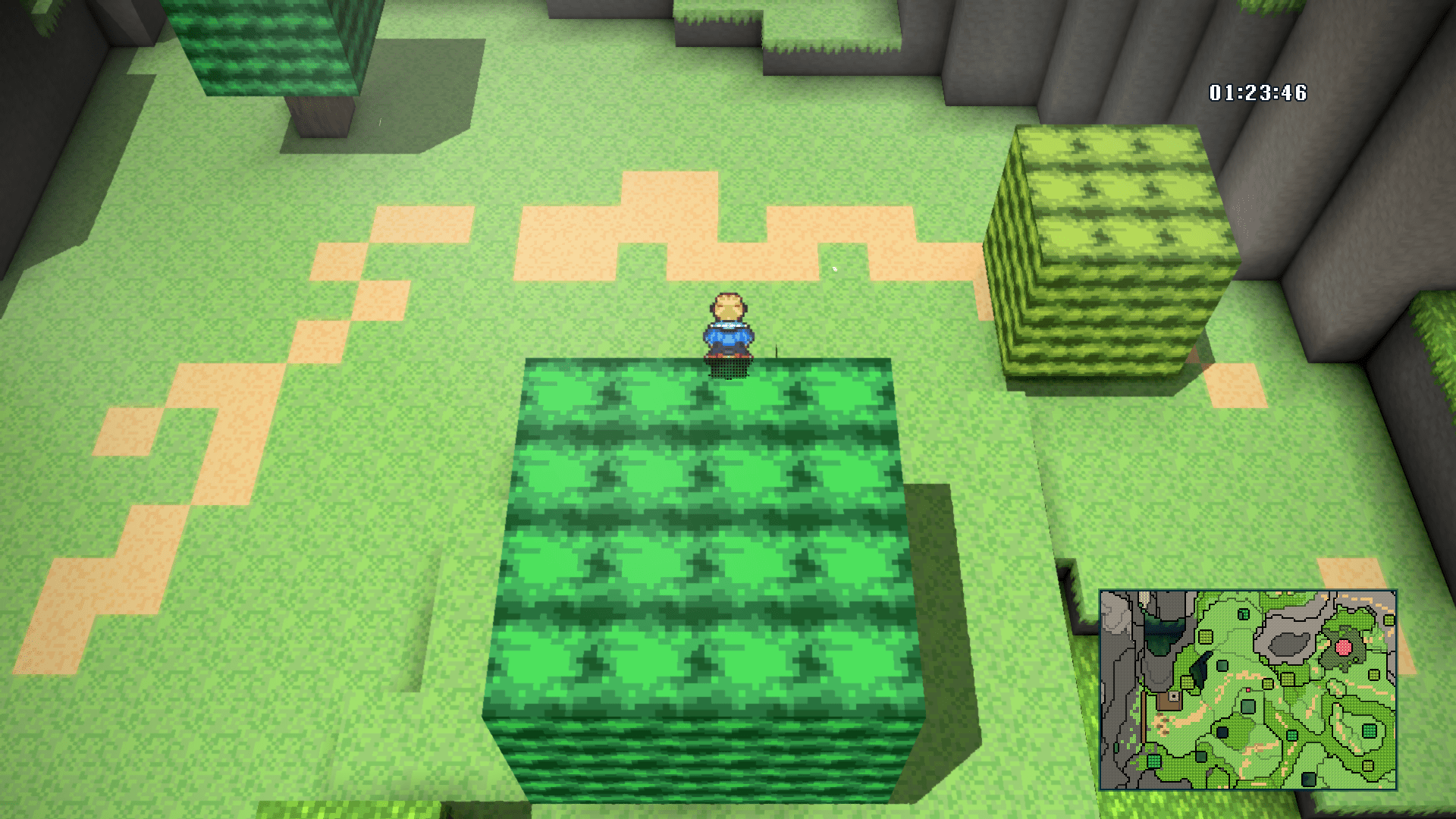 Head south just a few paces and hop northeast onto this tree. With that, you are now back on the trail, following the course’s intended sequence. 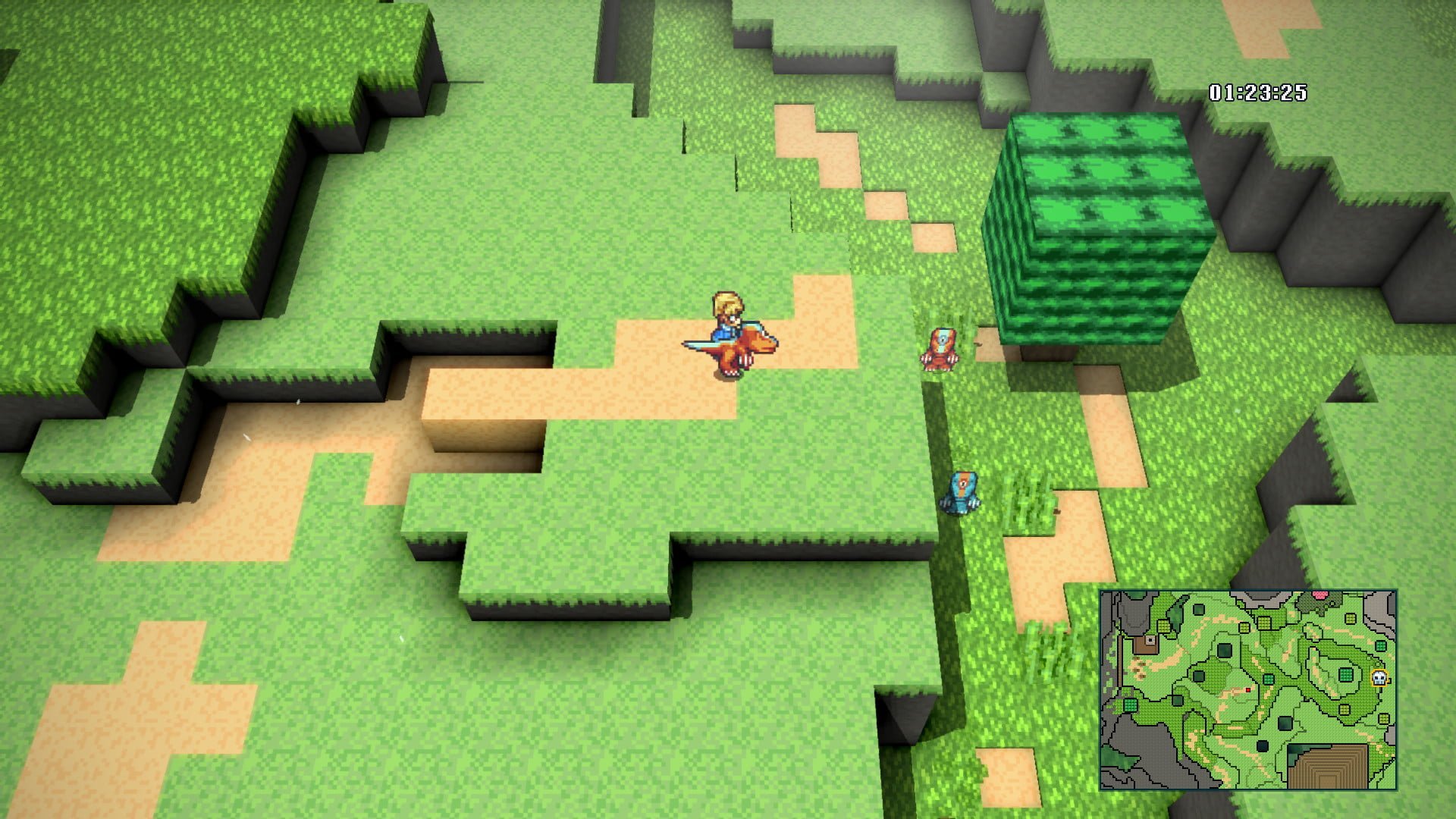 With your competitors so far behind, you are now hassle-free, and can take all the time you need to line up the jumps ahead.