This guide will teach you about the dangers of water, aquifers, and how to deal with them!

You may have heard horror stories of greenbeards and seasoned dwarves alike digging into aquifers, causing their entire fort to drown in a huge flood rivaling Noah’s funny little boating adventure. These stories are (probably) all true and aquifers can range from mildly annoying to fort-ending threat. But if you know how they work and how to deal with them they can actually be of great benefit to your fort. In the end they are but a small to medium sized obstacle to overcome when building a grand fortress worthy of Armok!

DisclaimerI verified a lot of info in this guide with good old Dwarven Science™ but there might be still inaccuracies as some info comes from the Dwarf Fortress wiki covering the previous version. Let me know of any inaccuracies so I can correct them!

A tile of water (and other liquids) can have a depth ranging from 1 to 7. A depth of 1 means it goes up to your dwarves ankles, a level of 7 means the tile is completely filled with water. To have the game display the depth of liquids, go to Settings -> Game and enable Show numeric liquid levels. Usually when talking about liquids in Dwarf Fortress the depth is indicated as x/7. 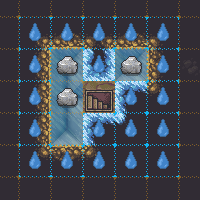 Water that is above ground and outside will freeze when it gets cold. Indoor and underground water tends to stay liquid, but may freeze as well if the temperature drops far enough. A tile is considered indoors if there is any solid tile anywhere above it, including stairs.

1/7 water will turn into harmless ice floor while 2/7 or deeper will turn into an ice wall. Freezing and thawing happens instantly and any creatures that get encased in a block of ice will die immediately.

Water that leaks out of an aquifer will instantly turn into an ice wall if it is cold enough.

An aquifer is a layer of soil or rock that carries groundwater. They consist of “damp” tiles that leak water onto neighboring tiles that are not solid wall. The amount of water an aquifer produces depends on what type it is. Light aquifers will release water quite slowly, while heavy aquifers will produce very large amounts of water. Heavy aquifers are quite rare though. 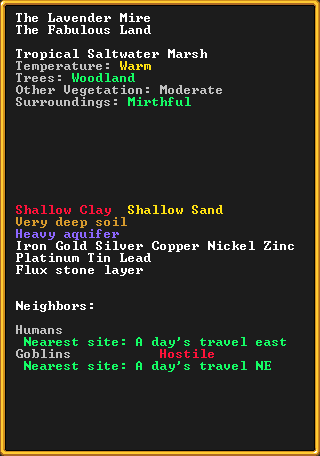 Depending on your embark location you might only have aquifer in some parts of the map or everywhere. You can also get a mix of both light and heavy aquifers. Hover over a tile with the mouse on the embark screen to see which type of aquifer it has.

CAREFUL: The info panel of the embark screen will only show information regarding the tile your mouse is pointing at! Make sure to hover over all tiles of your chosen embark location to avoid any moist suprises.

Aquifers are typically located one to several levels below the surface and can be one or multiple levels deep. If you embark close to the ocean the aquifer can produce saltwater instead of freshwater.

They do not overflow, instead absorbing excessive water that flows into them. As such, they’re both a source of infinite water and an infinite water drain.

In order to deal with an aquifer, you need to know which type it is and how deep it reaches. A simple staircase going down will do well enough to probe it. Once your dwarves hit damp ground they will stop digging to prevent flooding, giving you an alert:

You will have to designate the damp tile a second time to make your dwarves dig into it.

Once you have dug one tile into the aquifer, observe how quickly the hole fills with water. If it fills up completely within a second or two you have a heavy aquifer which is troublesome and can be rather dangerous. If it takes several seconds for any water to leak out and it fills very slowly, it is a light aquifer.

If you are quick enough, you can pause the game just after the aquifer tile was dug out, but before it starts filling with water. Look below the dug out tile and check if it is marked as damp. If it is, you have at least two levels of aquifer, otherwise it is only one level. If the dug out tile has already filled with any amount of water the tile below it will be considered damp regardless of being an aquifer tile or not.

There are multiple methods to dig through an aquifer and making it passable. Not every approach will work for every aquifer however.

There are a few other approaches that I haven’t included (yet), but the current list already contains ways of breaching pretty much any aquifer. I might still include the other methods in the future.

Works for both light and heavy aquifers of any depth.

The simplest solution for any and all aquifers is to dig a stairwell in a different location where there’s no aquifer present. This of course is only possible if your embark location has parts without any aquifer.

If your embark is very hilly or mountainous there might be parts where you are able to dig into the ground below the aquifer, bypassing it.

Dig one level into the aquifer and smooth the 4 adjacent walls. This will stop them from leaking water. If they are not made of stone, dig them out and construct walls in their place. Once the current level is secure and does not leak any more water, dig down another level and repeat until you have gone through the entire aquifer.

Works for both light and heavy aquifers of any depth. Only possible if your embark is cold enough for water to freeze. 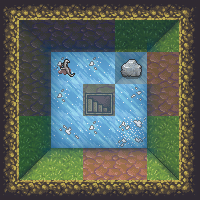 Channel a 5×5 area from the surface down to the aquifer with the center tile being a staircase. Channel one level of the aquifer at a time. The aquifer will leak water that will turn instantly into ice walls. If there are any solid tiles above the water it will stay liquid as it is considered indoors so make sure there is only open air above. Constuct a 3×3 ring of wall around the central stairs to seal the aquifer. You don’t need to wait for the 5×5 outer ring to turn into solid ice but it is much safer for your dwarves. Unless you want to risk any of them being entombed in ice.

If water stays frozen all year around you can save yourself some work and channel out a 3×3 area instead, keeping the ice walls as aquifer seal. If you’re worried about fire or lava possibly thawing the ice wall and causing a breach, use the 5×5 method instead. 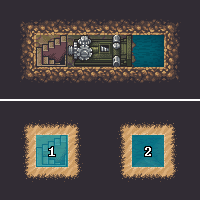 Works for both light and heavy aquifers that are only 1 level deep.

Works for both light and heavy aquifers of any depth but the size requirement becomes prohibitive for aquifers deeper than 1 level.

This side-view illustration from the DF wiki showcases the procedure quite well.

Dig out the area one level above the aquifer and channel one level down into it. Now remove the last tile at the surface that is still holding the plug up. This will cause it to drop into the aquifer. Now you have a chunk of dry land blocking the aquifer and can dig a staircase through it safely.

Going through multiple aquifer levels requires you to create larger concentric rings to allow you to drop multiple plugs.

As you can see aquifers really aren’t that scary or hard to deal with. Players have used them to create all sorts of wacky devices and glorious constructions!

Here are a few fun things you can do with your aquifers:

Now go build the mightiest tavern/fort/whathaveyou that will make Armok laugh with glee!

Rock and stone!
Strike the earth!