Eden’s Fire is a main story mission in Far Cry New Dawn. This walkthrough will guide you through all objectives of Eden’s Fire Main Quest.

Once you’ve completed The Prophecy, go back to Eden’s Gate to start this mission. This time when you knock on the door you’ll show the book to the judge and he’ll let you in. You then need to follow him through the compound until you get to the largest building. 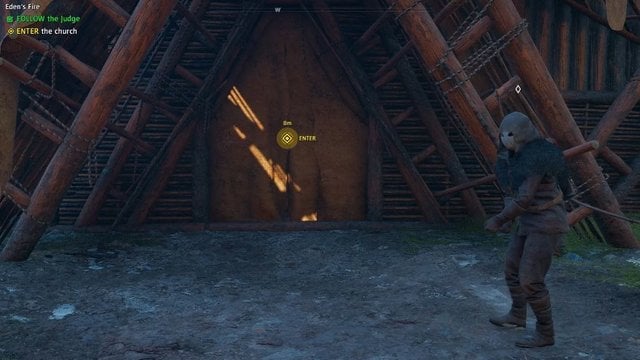 Go inside and you’ll be treated to a cut scene with Joseph’s son, Ethan. Ethan will fill you in on what’s going on with the compound and Joseph’s absence. He wants you to prove that Joseph is dead but before you can be allowed to travel North you have to complete another quest.

A new waypoint will appear instructing you to talk to another member of New Eden. She’ll explain your quest is to rekindle the flame of New Eden on the site where the old statue of Joseph was knocked down. She also says there are people there to help you with this mission.

Meet the Chosen
This new location is a fair bit south of the compound. If you’ve completed some outposts you might be able to fast travel but if not the easiest way to get here is to grab one of the boats and make your way down the river then turn to the land when you’re adjacent to the new waypoint. 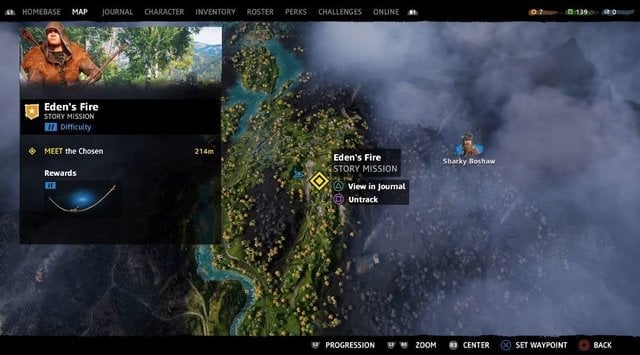 This is also quite high up a mountain and the easiest option is to find the path. If you come at it straight from the river you can also see grappling points if you’ve unlocked that perk which can make the journey a bit faster. 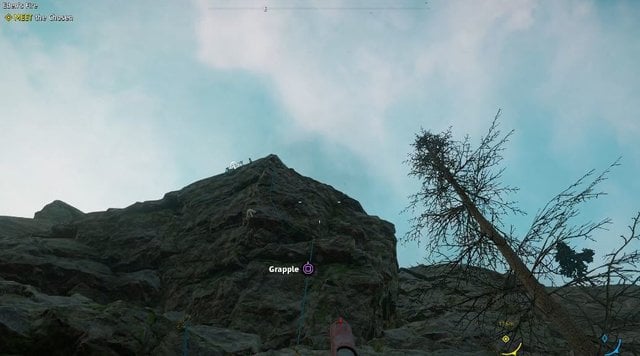 Once you’ve made it to the spot, you can also choose to equip a bow and arrows. The chosen ask you to do this but you don’t have to. A bow is a silent weapon and will allow you to do most of this mission stealthily which is easier than charging in head-on – especially given those helping you are also using bows. If you do use the bow, make sure to head to your kills to recollect arrows for ammunition.

The leader will explain that there are many enemies and the task is dangerous and difficult before leading you up the path to the statue.

Secure the Statue
You’ll soon come across the first group of enemies. There should only be two at this section, take them out stealthily if you can. 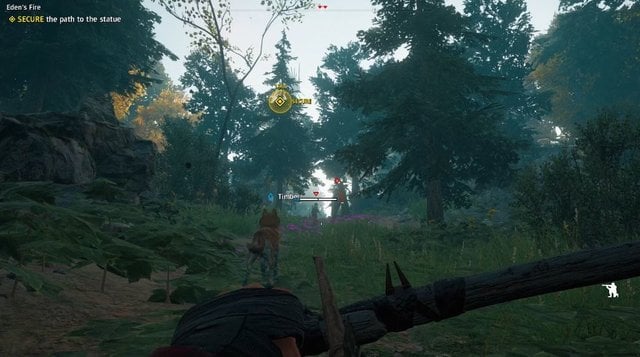 Immediately ahead is an elevated lookout with two more enemies on either side of the base.

Nearby is another lookout just before a turn around a large rocky area. Around the other side of the rocks should be about five enemies. You can climb up on this look out and take some of the further back enemies here out. Then creep around behind the rock to take out the rest before moving forward. 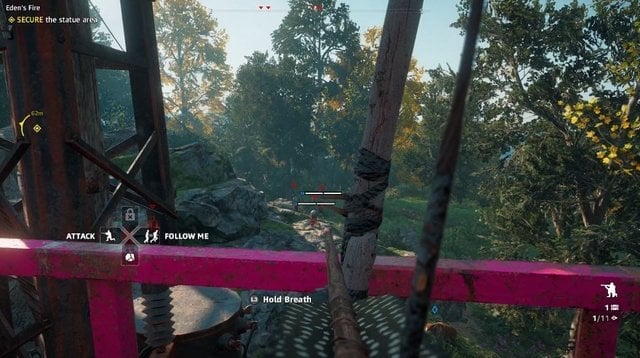 The next group of enemies are around a turn with a lot of junk. It will look like there are three or four depending if one has walked off. It’s a good idea to just remain in sneak as they can move a fair bit from their positions along this path. 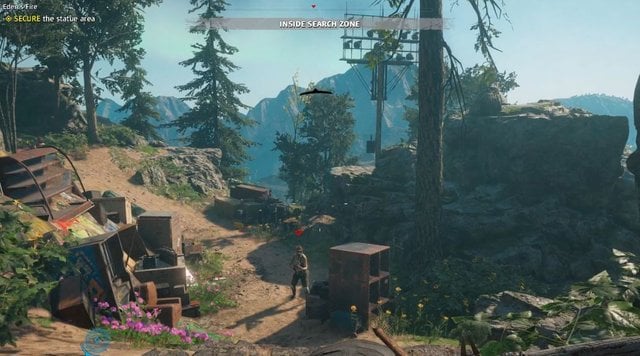 As you get closer many more will come running from hiding places so you’ll be facing a minimum of 6 enemies (depending on how many you’ve managed to take out in isolation) as you come around this bend. This section is really difficult to do stealthily but if you do engage a firefight they will call more highwaymen from farther back making this a very uneven fight, plus likely lose most of your support very quickly – don’t worry too much as it doesn’t matter if some of these people die. 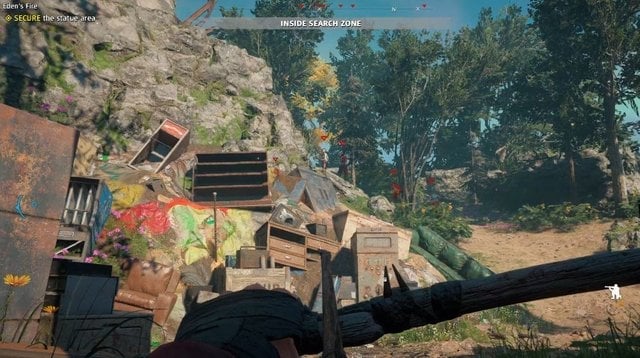 Once this fight is over talk to the leader of the group once more and he’ll explain you need to go into the cave, drain the water, and fill it with bliss before igniting it.

Enter the Cave
Once inside the cave swim south to the pink neon light offshoot. Once you’re close you’ll see a drain under the water with a valve near it. Dive under and turn the valve to drain the cave. 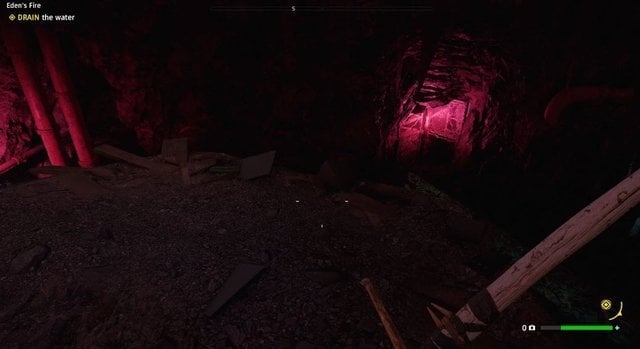 Turn around and head left to find the first bliss pipe to destroy. Hitting it with a melee weapon or shooting at it should get the job done. Just make sure to make a quick escape because Bliss is toxic stuff. 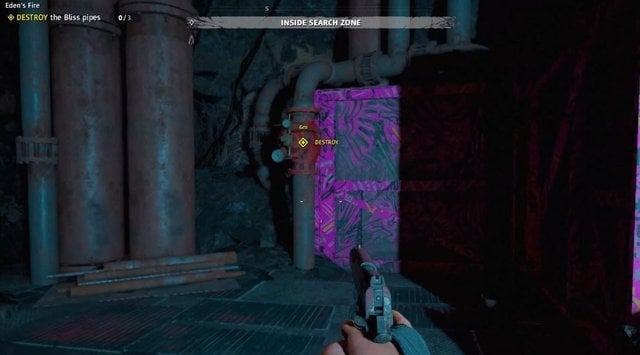 Further across to the west again is a corridor that you’ll need to break the wood to get through. Do so then run to the edge and drop down. You’ll see another wooden panel hiding the next pipe. If you have a remote explosive that’s the safest way to do this one but if not try to stand on the ledge and then take your shot so you can get out nice and quickly. 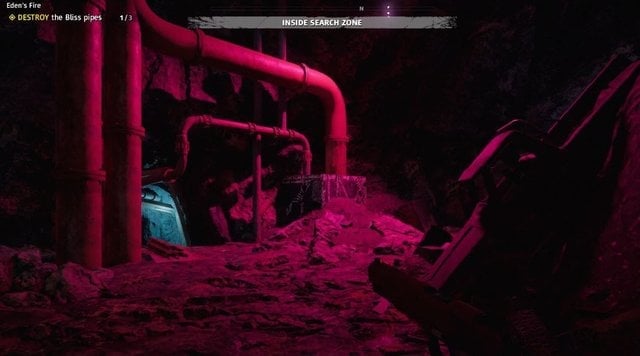 Next up, head to the leftmost corridor and break down the wood slats in the way. At the end is another pipe to destroy so do that and get out to the main area of the cave and back up to the entrance as quickly as possible.

Wait for the cave to fill up with bliss and then set it on fire. The safest way to do this is to use a throwable explosive like a molotov which are pretty cheap to craft if you don’t already have one. Then make sure you are well clear of the cave entrance because that fire comes at you fast. 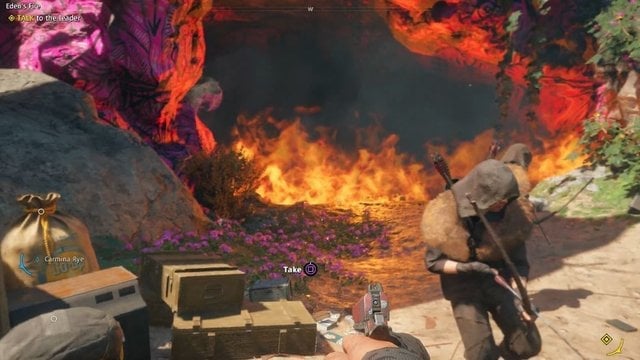 Talk to the leader once more and he’ll tell you to return to Ethan for further instructions.