This is a simple little guide for people new to pathfinder. From swarms to spellcasters. Im not entirely sure of every single detail thats been changed between classic and this, so take things with a grain of salt.

First off There is no shame in playing the game on normal, easy or anything else play the game at a difficulty level that feels right and dont be afraid to tune it down if its too hard. A real gm would tailor the game to his players, but since you dont have a real gm, dont be afraid to lower the difficulty or raise it as you see fit.

Theres a nice bunch of pregens to choose from, but if you’re anything like me, you want to make your own. Im going to cover the basics of character creation so you can make a fun, useful build.

Race try and get an idea for what class you want to play before you select race. for example a halfling barbarian will have a hard time keeping up with say a human barbarian. that doesnt mean you cant or shouldnt play a halfling barbarian or a dwarf bard, it just means be aware of what each race does.


If there’s a green tick next to a skill, that means it is important for your class. 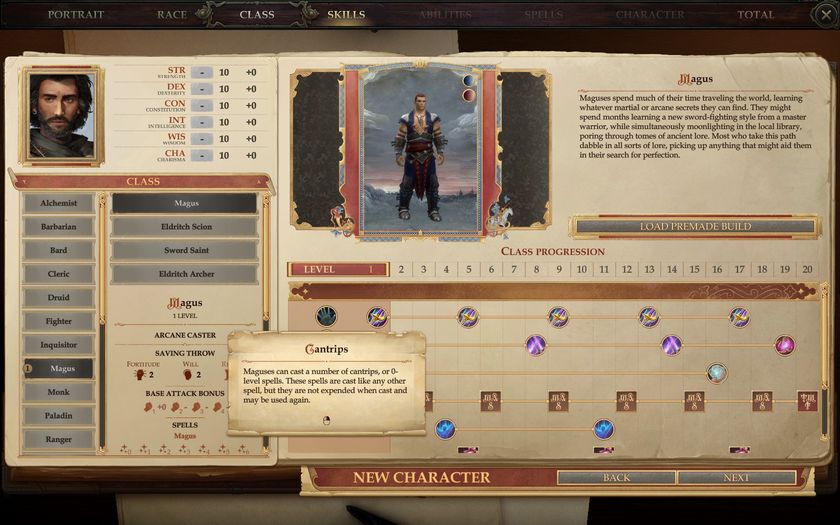 When selecting a class, there will be a level progression chart at the bottom. Pathfinder allows multiclassing. Prestiege classes can only be unlocked once the requirements (listed when hovered over) are met. Generally you want to decide if you want a presteige class early on and build yourself around it if so.

Before you can get to hacking and slashing, you have to bring the right supplies.

First and most importantly, BRING A HEALER or some form or healing if none is available. I cannot stress enough how crucial healing is. there are plenty of potions in the intro area for you to bring until you can get a dedicated healer, so make sure to loot all the potions you can.

Pen and paper pathfinder (try saying that three times fast) features turn based combat. since this game is live action some things are different. one “round” is six second. during a round a character gets one action, a move, and a swift action. Free actions are, as the name suggests, free and can be done limitlessly. We’re going to start with simple and cover spells later.

Initiative Each character rolls iniative as soon as both parties (yours and the opponants) see each other. The higher the Initiative, the faster your character gets to act.

Attack Roll When you make an attack roll, you roll a d20 plus attack bonus. (Other modifiers may also apply to this roll.) If your result equals or beats the target’s Armor Class, you hit and deal damage.

Crits and Crit Fails on a natural one (hence forth known as a nat one) your character auto misses reguardless of bonuses. one a nat 20 they auto hit and “threaten” a critical. after a person rolls a nat 20 they roll again, if they beat the targets ac the second roll they confirm the crit. on a fail they just hit as normal.

Attack Bonus this is added to your d20 roll after it is made. the game calculates bonuses automatically. however, keep in mind that this bonus comes from this formula “Base attack bonus + Strength modifier + size modifier” for a melee weapon (dont worry rogues, there’s a feat to make that dex instead of strength) and “Base attack bonus + Dexterity modifier + size modifier – range penalty” for ranged attacks. im unsure if ranged penelty applies in this video game.

Armor Class (AC) this is the number that needs to be beaten in order to hit and be hit. your ac is calculated for you, however, here’s how to bump it up. “AC = 10 + armor bonus + shield bonus + Dexterity modifier + other modifiers” more on that later for you guys looking to make a tank.


Attacks of Opportunity When running, casting a spell, drinking a potion, and a handful of others in a threatened area (an area an opponant could hit you) they can take a free attack on you.

Flanking in Pathfinder: Kingmaker, all you need to do is have two people attacking/threatening the same target. Rogues can sneak attack a flanked target.

Monsters are tough. But with the proper preperation, you can be tougher. In this section I’ll be going over DR, weaknesses, resistances, immunities and other helpful tips.

DR is an amount subtracted from all attacks that dont meet a certain criteria. For example, a lower demon like a dretch has DR 5/cold iron or good. “What the ♥♥♥ does that mean?” woah easy there Im getting to that. it means any nonmagic attacks you hit him with do five less damage than they should. However, if your weapon is made of cold iron or is classified as a “good” weapon, it bypasses that. If something has DR 5/blunt, use a club. DR 10/slashing, use a sword or axe. you get the idea.

One last dretch example, the dretch stat block reads “Immune: electricity, poison”. Once again, similar to DR, however this time there is no limit on it. it doesnt matter if you hit him with five points of lighting or 100, he aint taking none of it.

As the Master of Scrolls himself once probably said “If you’re fighting a swarm, bring Area of Effect spells, bombs, alchemists fire or acid flasks. Swarms cannot be damaged by weapon attacks or spells that target only one opponant. Most are also mindless, which means no enchantments. If you dont have any AoEs, I suggest you run for your lives” – Kreighton Shaine (probably).

Q: How can I make a full custom party?

A: Hire companions from 8 Eyes in the tavern. The price scales by the level of your character. If you fight off the bandits then talk to her before leveling up, it should only cost 500gp per hero.

Written by A Playa Named Ross