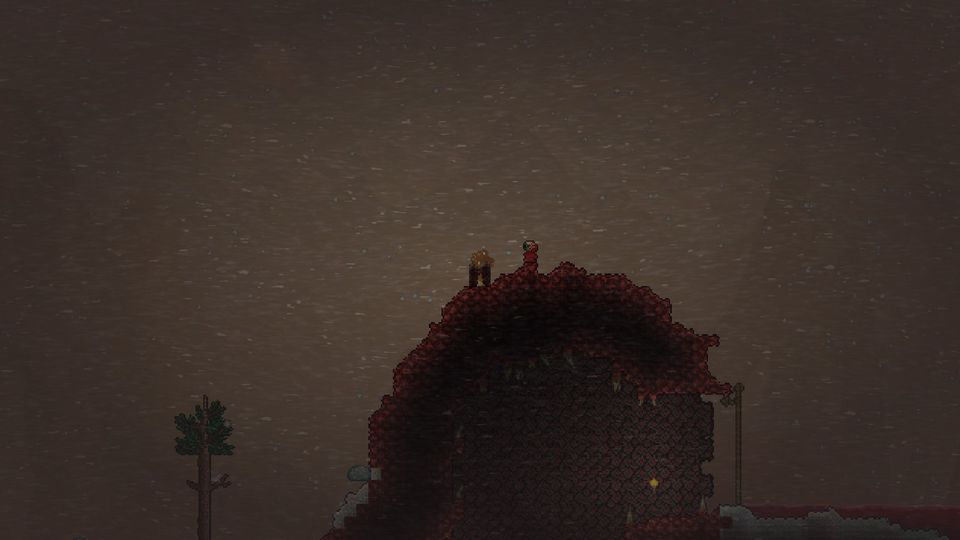 In this guide, I’ll give some tips and pointers on how to beat the final boss of Pre-Hardmode!

Introduction
The Wall of Flesh is a massive, as the name suggests, wall of flesh. This is the last boss you fight in pre-hardmode, leading it to be the most difficult. The fight takes place in the Underworld, the most treacherous biome in pre-hardmode, adding to the sheer difficulty of the fight. In this guide, I’ll explain how to beat this fleshy menace and advance into Hardmode!

As the fight takes place in a ridiculously dangerous biome, it’s a necessity to make an arena for this fight. However, it won’t be like most traditional boss arenas, as the Wall of Flesh sweeps across the screen. This battle calls for a Hellbridge!

First, gather obsidian bricks, either from this biome itself or by crafting them yourself. Once you’ve gathered a lot of them, convert them into platforms. In case your wondering why we’re using obsidian brick platforms, in Expert Mode, Lava Slimes in the Underworld leave behind some lava, which could rip through other platform types. However, this won’t happen with obsidian platforms! Now, use all of the platforms to make a large bridge, spanning across most of the Underworld. This process is definitely tedious, but it’ll help you in the long run. When you’re done with that, run around and place campfires on the bridge for extra regeneration. You shouldn’t have a house set up for this fight, as the sweeping Wall of Flesh will likely kill the Nurse if you set her there for the fight. Once you set up your bridge, you should be good arena-wise!

Since the Wall of Flesh is the hardest boss in pre-hardmode, you’ll need some of the best equipment you can currently get. If you haven’t already, I recommend you pick a weapon class at this point, as it plays a big role in hardmode, which is triggered right after you kill this boss. I will give a list of items each class should get below:

(Note: You don’t have to get ALL of the equipment below, these are just some good recommendations)

Once you get the equipment you want, you’ll be great equipment-wise!

(Warning: this fight is an EXTREME ordeal with a Melee character!)

To summon the Wall of Flesh, you’ll need to throw a Guide Voodoo Doll, dropped by Voodoo Demons, into the lava (NOTE: the Guide must be alive for this to work!). Once it lands in the lava, a message will appear stating that the Guide has died and the Wall of Flesh has awoken. Get ready, this fight is pretty difficult!

First, you’ll need to take out the Hungry, the mouths that it spawns. They respawn eventually, but it’ll be easier to hit the Wall of Flesh if you eliminate them. I recommend you aim for its eyes, as they have less defense than the mouth. After a while, it’ll start shooting Leeches from its mouth. Leeches are weak worm enemies that can easily be taken out, although they’re quite annoying if their numbers get too high. Use the Shield of Cthulhu to dodge the lasers it fires. It gets faster and faster as its health goes down, going up to a maximum speed of 50 MPH. I hope you got the Bunny Mount for this fight, as it’s one of the only things that can barely keep up with the Wall of Flesh. Its attacks also get faster as its health goes down, so be sure to be ready to dash away! This may seem simple, but these tactics will make the fight a bit easier for you. If you keep this up, you may be able to take it out and unleash the spirits awaiting you…

You’ve beaten the final pre-hardmode boss! But don’t let pride rush to your head… as HARDMODE has begun! Open up the treasure bag you’ve obtained from it, and consume the Demon Heart that drops from it. This gives you an extra accessory slot, which will be super helpful for the challenges that lay ahead. You’ll also get the Pwnhammer, which allows you to break those Demon Altars or Crimson Altars, depending on your world evil, to spawn new ores in your world! Have fun in hardmode… things only get more difficult!