Shuttle Types
All 3 available shuttles are crafted in the Large Printer, which is unlocked from the start.
Each shuttle has a space for an Oxygenator, and allows for an oxygen network to be established on a new planet as long as the Shuttle remains connected. The 2 bigger Shuttles additionally offer a cargo area to store some items, the Medium Shutle has 2 Medium slots while the Large Shuttle has 2 Large slots, meaning that larger packages or more Medium Storage modules can be carried on each flight.

Crafting Requirements: (Bytes are only needed once to unlock the recipe)

(Alloys are made in the Chemistry Lab)

Thrusters
Currently there are 2 Thrusters available in the game: The Solid Fuel Thruster, which is crafted using 1 Ammonium and 1 Aluminium, and allows for 2 uses before it turns into debris. Alternatively one can craft a Hydrazine Thruster using 1 Tungsten and 1 Titanium Alloy, which uses Hydrazine as a fuel source and is infinitely reusable, as long as fuel is plugged onto its sockets. Hydrazine is crafted in the Chemistry Lab using 2 Ammonium and 1 unit of Hydrogen, made in the Atmospheric Condenser. A canister allows for 4 flights.

Comparison of all types of Shuttle 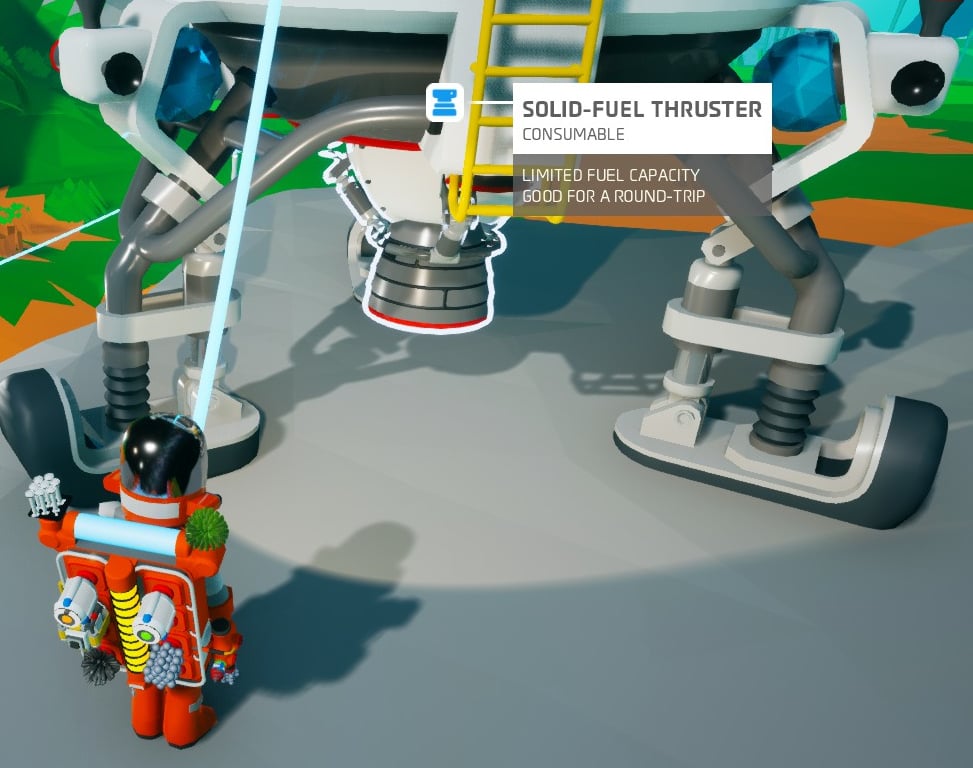 Once you have attached a Thruster onto your shuttle pressing [X] or [C] will launch you into orbit of your current planet, large blue bubbles show you places that your shuttle can land, your base has a landing pad by default, but note that if it is occupied by another shuttle it will not appear on your flight menu, you can create additional landing zones by crafting a Landing Pad (1 Aluminium and 2 Ceramic)

Pressing [X] or [C] another time will put you into the solar system map, where you can observe the conditions and abundant resources of each planet, clicking on a planet will make your shuttle set course for it, so make sure you do not click while observing a planet you don’t intend on flying to.

Your Shuttle will now enter orbit of the selected planet and the landing zones are presented.
Clicking on a landing zone will land the shuttle on a flat surface.

NB Thruster charges are consumed when travelling up from a planet’s surface, and when travelling between planets, none is consumed during the landing process. (0.5 charges during lift off and 0.5 during transit)

Remember to leave an active Beacon on planets you have set up some equipment on, as until you have made a Habitat or another Shuttle there is no waypoint marker to show you which zone you previously landed on, the Beacon will be visible from orbit and you can return to your previous landing zone without any doubt.