With tricks and treats aplenty to go around, ensure that you know what’s going on with a full lowdown on the event and grab a free handy reward checklist while you’re at it.

‘In select Realms, the sky has undergone an unsettling transformation, tearing apart to reveal a mysterious rift.’ Generators, Hooks, the Exit Gates, and the Basement have been decorated for the duration of the event.

Players must complete specific objectives to collect a new thing called ‘Void Energy’. Once sufficient Void Energy has been collected, you can seek out an Unstable Rift to deposit your haul and earn up to 12 Halloween Cosmetics for Killer and Survivor (see ‘Event Checklist’ section for details.)

A ‘strange and inexplicable substance from a Realm beyond’, Void Energy must be collected and deposited in an Unstable Rift. Players can only carry up to 15 Void Energy at a time. Depositing a total of 30 in a single match will grant you one of 12 rewards.

Survivors can collect Void Energy by repairing Halloween Generators and Killers collect it by hooking Survivors on Halloween Hooks. It will also possible for both sides to steal Void Energy from one another, either (as killer) by downing a Survivor or (as survivor) stunning the Killer.

That’s a lot of info there, so just to be more clearer:

As a Survivor you get Void Energy by:

As a Killer you get Void Energy by: 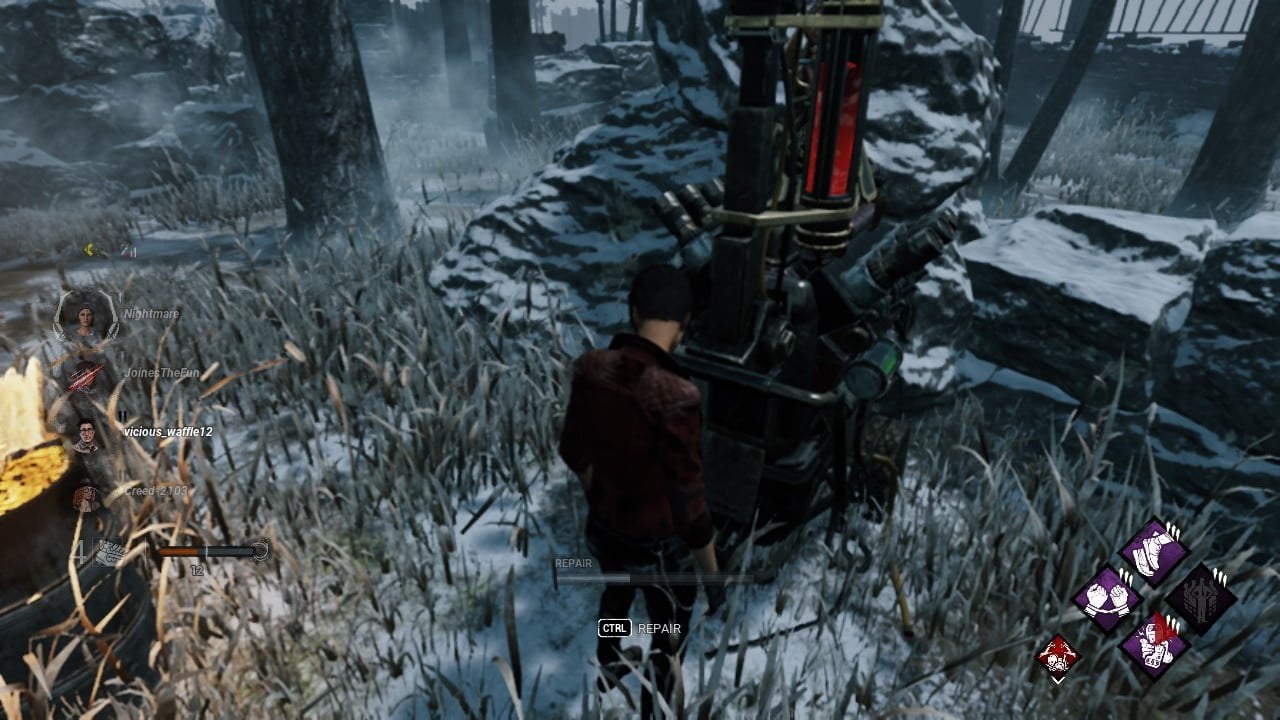 A small bar on the bottom Left will show you how much void energy you have.
Carrying 15 Void Energy will reveal the aura of the Unstable Rift to you.

Up to 3 Unstable Rifts will spawn across the Map in a trial for you to find and will disappear if left alone for long enough – respawning in different locations. After depositing your Void Energy into them – you earn bonus Bloodpoints and gain a temporary speed boost (the Haste status effect.)
The Rift will then disappear, respawning at a new location shortly afterwards.

An Unstable Rift from the Survivor perspective: 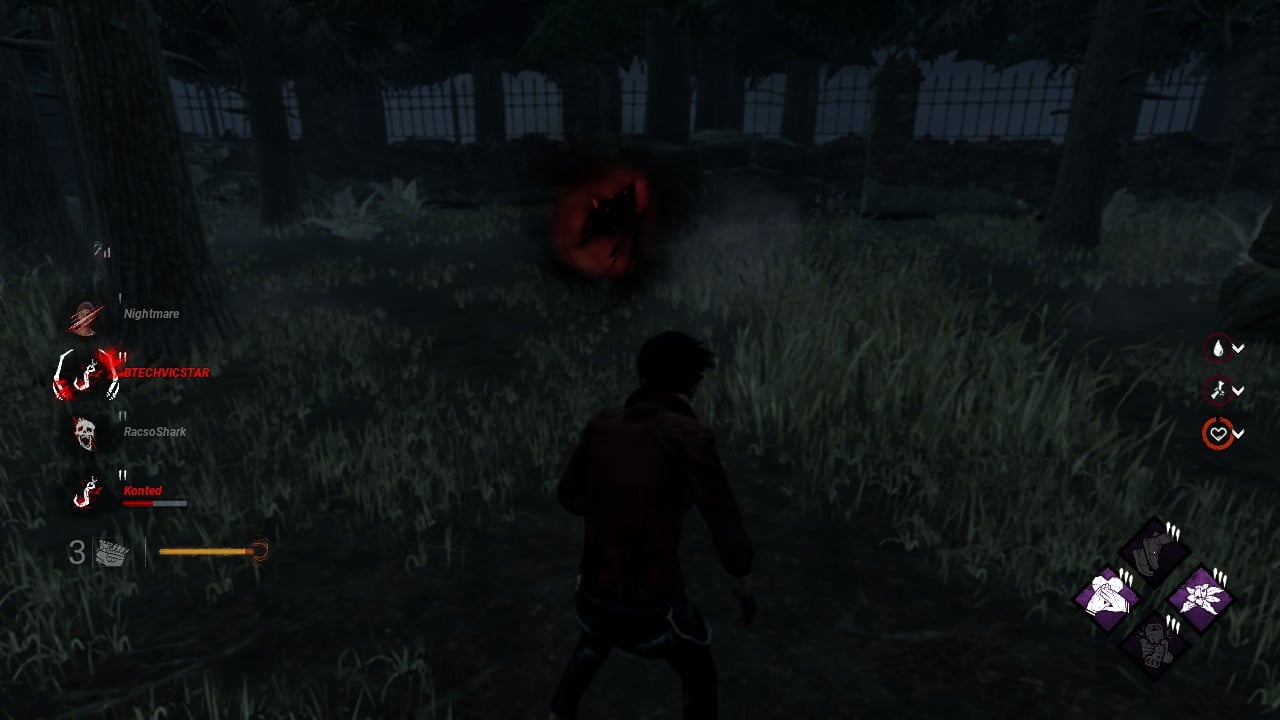 An Unstable Rift from the Killer perspective: 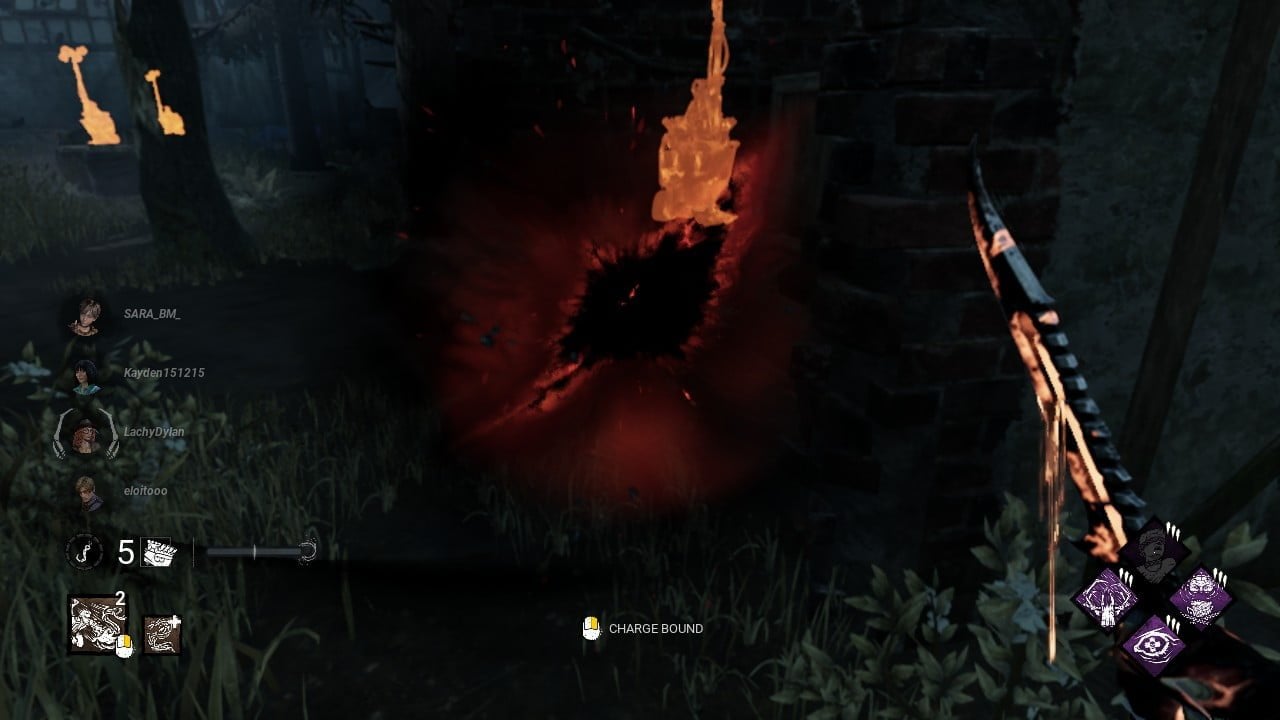 This event sees the return of the Will O’ Wisp Flashlight, the All Hallows’ Eve Lunchbox Med-Kit, the Blight Serum, and a new Bloodpoint Offering in the Bloodwebs: 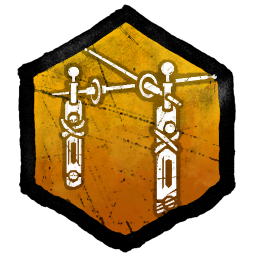 Gives 100% bonus Bloodpoints for Event Hooks, Event Generators and Void Energy Transfers when used. An Offering for both Roles. *Only playable during the Haunted by Daylight Event*

The ‘Will O’ Wisp Flashlight.’

‘A Flashlight equipped with a special lens cover that adds an orange tint and a little Ghost to the beam. Considerably increases friendly Ghosts in your life.’ This item has 8 seconds of use. Survivor Only item. Can be used after the event.

The ‘All Hallows’ Eve Lunchbox Med-Kit.’

‘A plastic lunchbox with phosphorescent Halloween Stickers that has been packed with first-aid equipment.’ Increases the altruistic Healing speed by 35% and unlocks the Self-Healing action. This item has 24 Charges. Survivor Only item. Can be used after the event.

Medkit Add-on. ‘A refined version of the Putrid Serum that is mostly safe for human consumption.’

Press the Secondary Action button while healing with the Med-Kit to use the Refined Serum:

It will increase your Movement speed by 5% for 16 seconds and will create a Blight trail behind the affected Survivor. It can be used on other Survivors or yourself and will consume the Med-Kit upon use. Survivor Only. Can be used after the event.

‘A small amount of Compound Thirty-Four, the final serum The Blight worked on before his transformation. Causes extreme mutations in high doses.’

If used with The Blight you benefit from the following effect:
Grants 1 additional Token towards the Rush ability.

If used with any other Killer, you benefit from the following effects:
Press the Power button to initiate a Blighted Rush, allowing you to dash forwards at 200 % of your default Movement speed for 2.5 seconds.

It will temporarily replace your default Power with the Blighted Rush ability until its token is consumed (you start off with one token and gain one each time a Survivor is hooked).

*Note that you are unable to attack during a Blighted Rush*

Killer Only Add-on. *Only playable during the Haunted by Daylight Event*

Without further ado, here’s the event item checklists. One for the killer weapons and one for the survivor shirts.

There’s twelve items in total to collect (six for each role).

There will also be additional rewards to earn in the Haunted by Daylight Event Tome, with two pages worth of Challenges to complete:

This includes the return of Community Challenges (see image below) – which can only be completed by the combined efforts of the entire community: 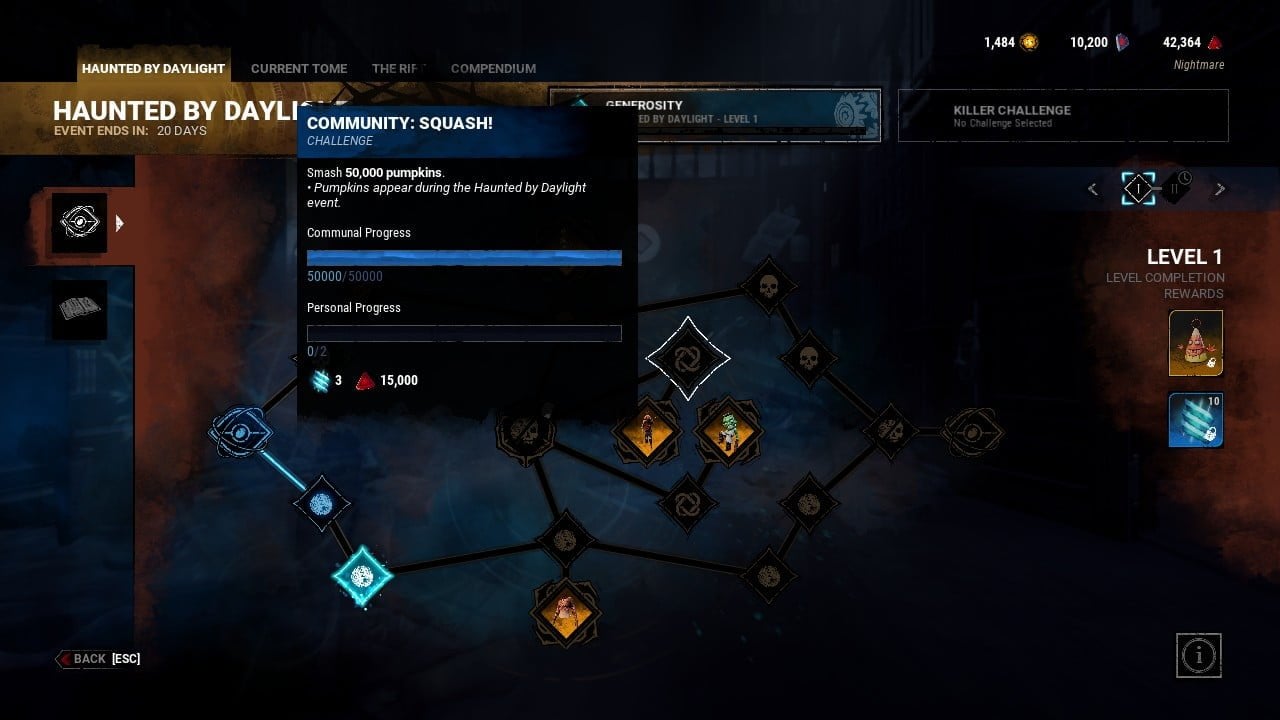 *Remember that even if the community goals are met, you still have to contribute your own individual portion to progress further and earn the rewards*
And individual challenges.

This Event Tome contains the following outfits to collect: 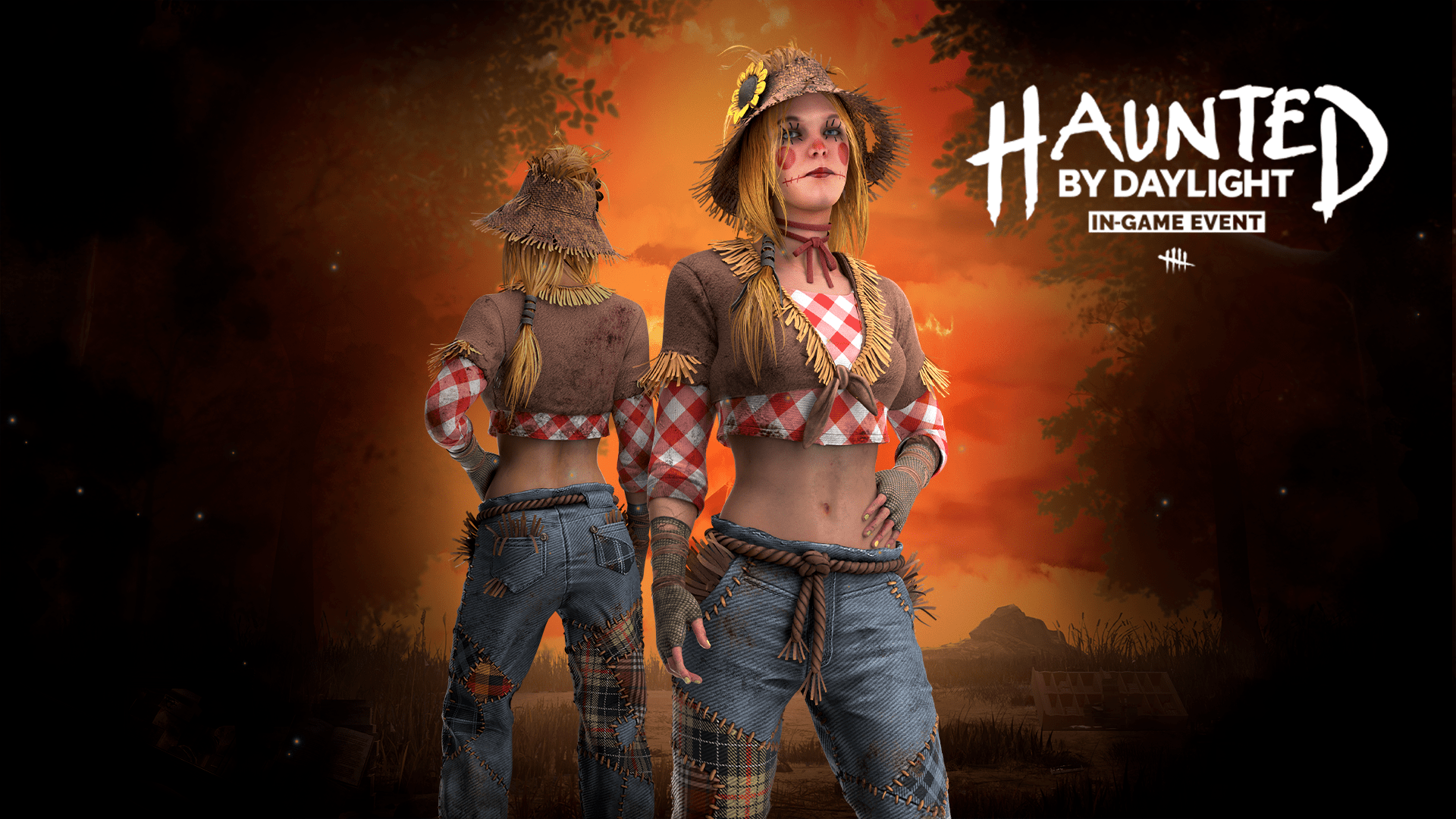 and The Hag’s Swamp Creature: 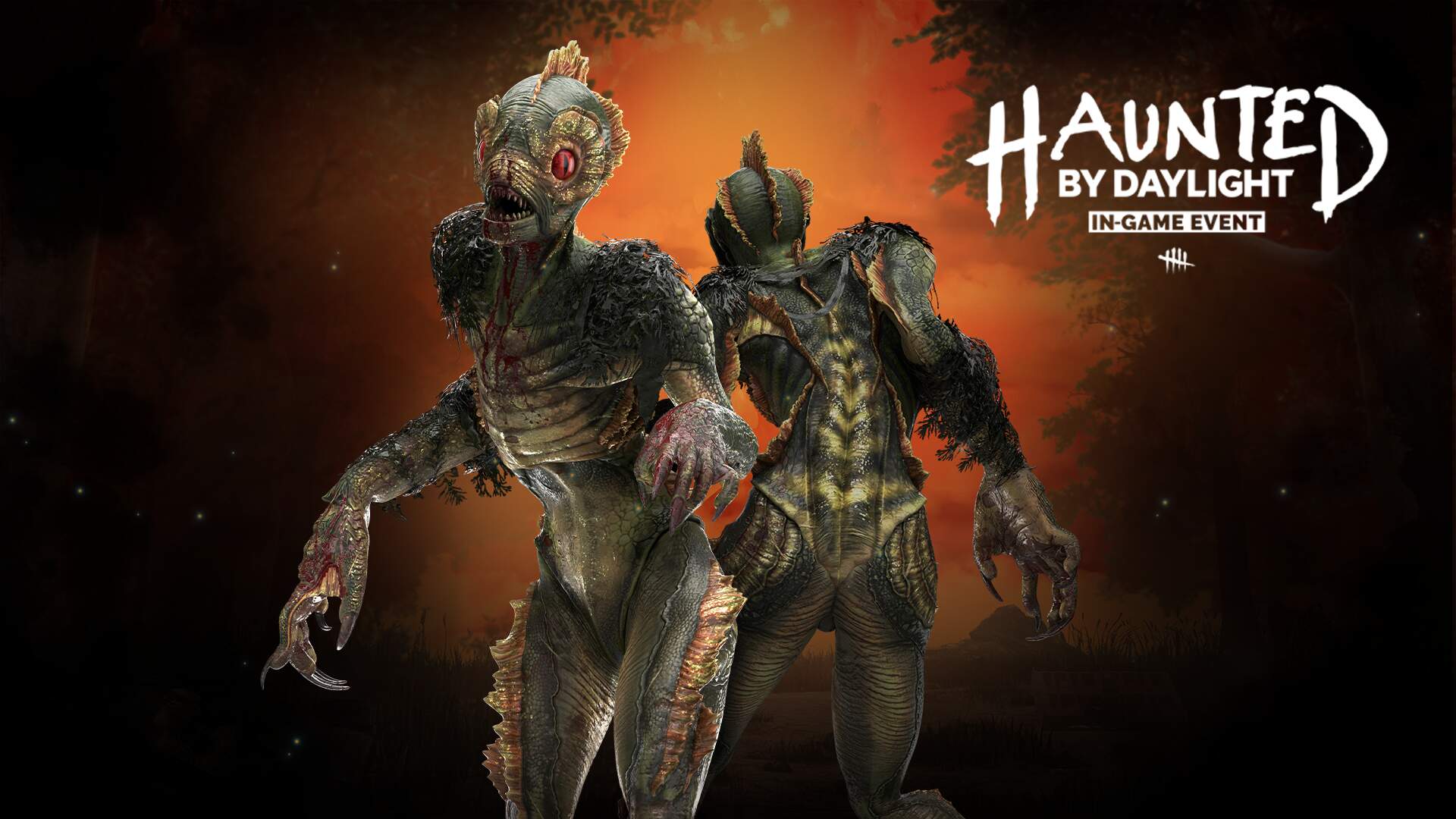 Alongside the following charms: 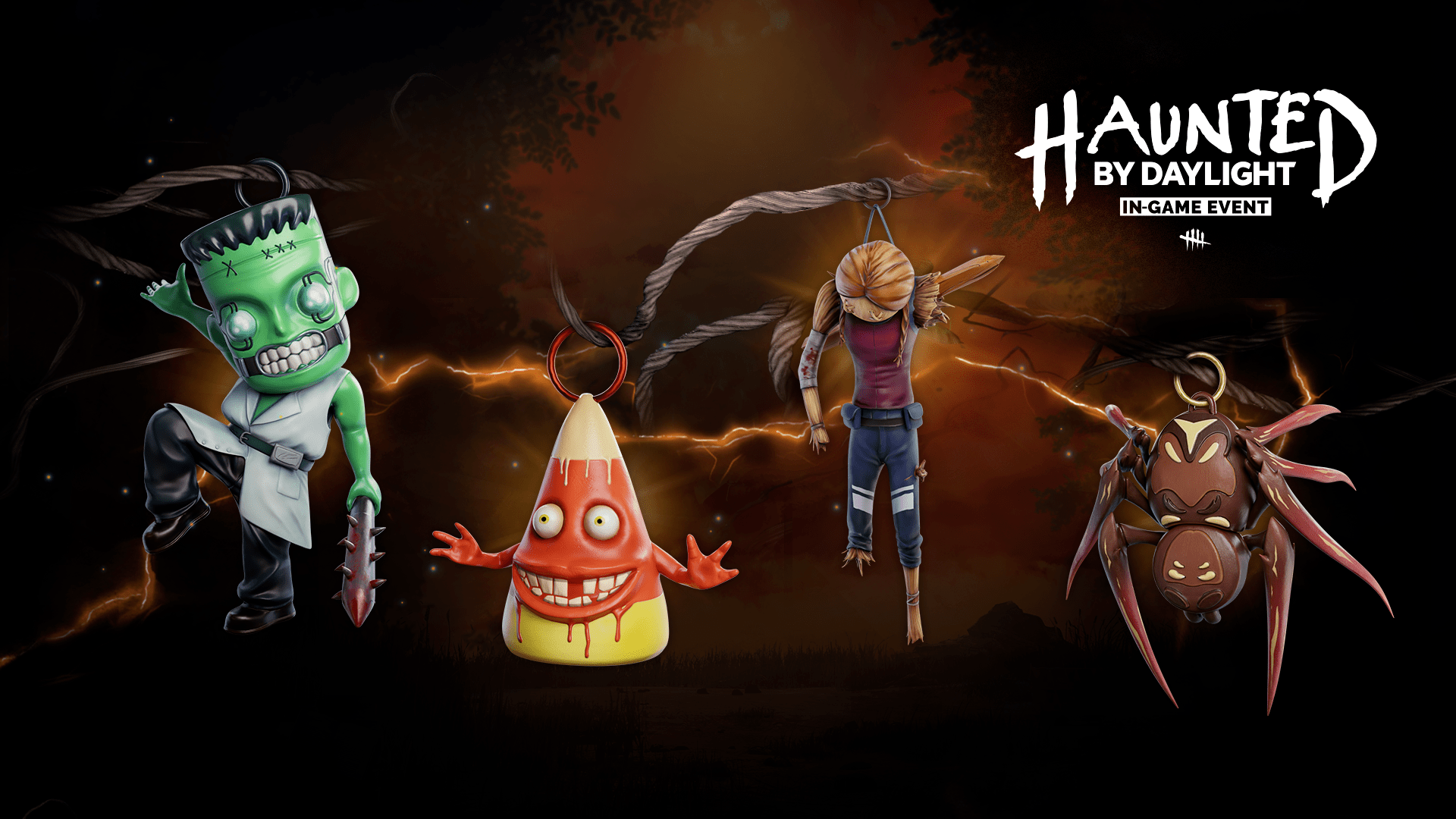 (Shown from Left to Right) they are the ‘Lil’ Monster’, the ‘Megcrow’, the ‘Creepy Corn’ and the ‘Candy Spiders’.

Here is Page One of the Event Tome: 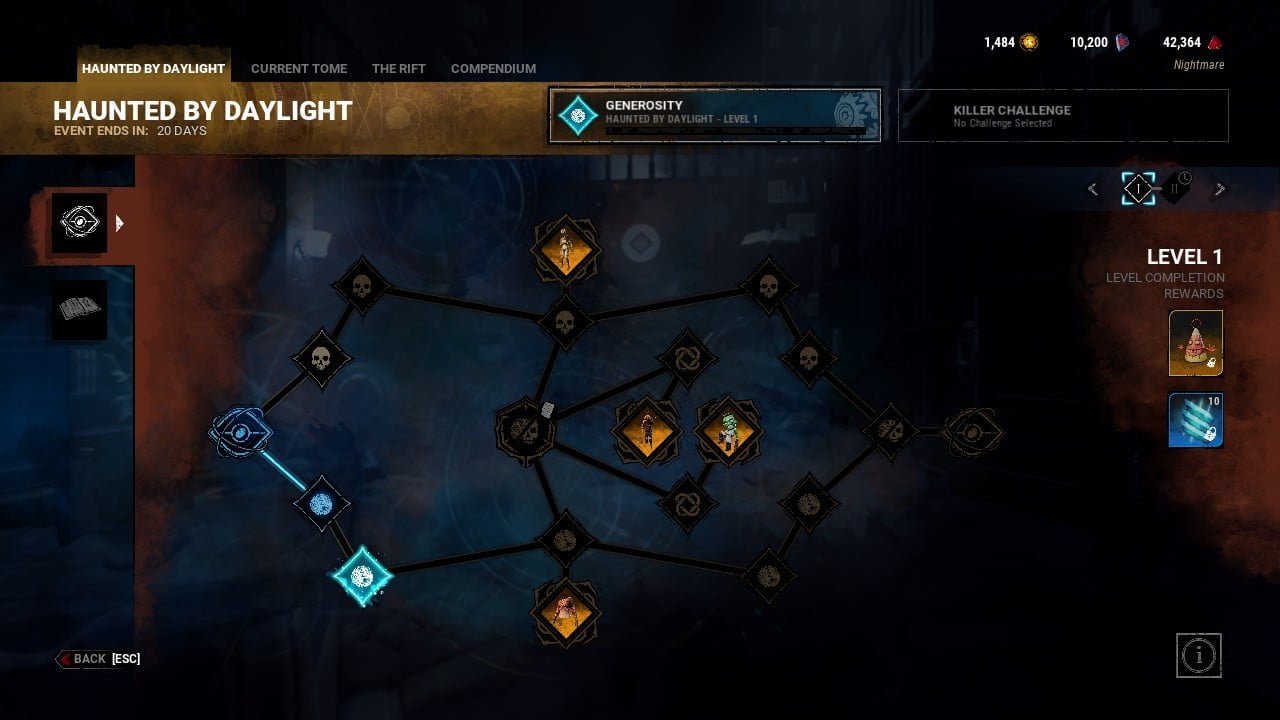 Page Two will be uploaded when it releases in game:

There will also be Login Rewards running throughout the event, these will be distributed as follows:

As always, feel free to drop any questions below in the comments and I’ll do my best to answer you.

Have a great Halloween and many thanks for reading!