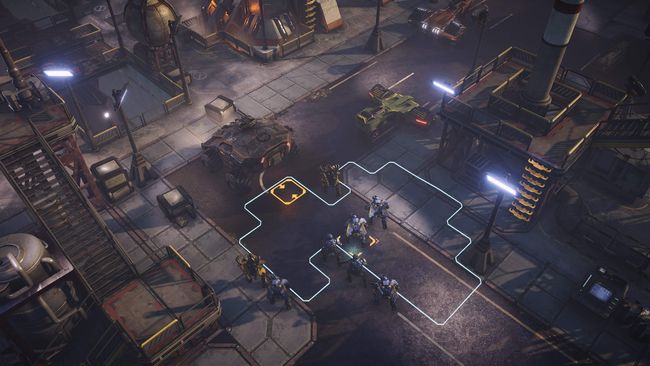 Combat in Phoenix Point is based around Turn-Based Strategy. Players will deploy their Squad to missions whith different objectives. In Combat, players will have to manage their soldiers by spending action points and performing different actions depending on the situation.

When moving a unit next to a building or structure you will see an icon representing the cover that unit will get for moving there:

Using equipment or abilities consume a proportion of a character’s action bar, as follows:

Will Points can be earned by:

Will Points can be lost by:

You can fine tune the aiming by scrolling up with the mouse wheel when in shooting mode. This will display two circles:

These firing circles give you a visual representation of the accuracy of the attack, and the ability to evaluate blocking objects or friendly fire.

You can fine tune the aiming by holding down the left mouse button and dragging, or by clicking on the screen.

Enemy units have different limbs. Limbs can be destroyed if they get enough damage crippling the enemy in different ways. For example you can destroy an enemy arm to disable its ability to attack.

When shooting, players will have the chance to switch into First Person Shooting. This will allow you to aim for a particular limb and destroy it. It’s important to note that even if you are manually aiming the unit will perform the shot based on its own aiming capabilities, meaning that the shot can be missed anyway.

Critical Hits: All weapons have a random chance to cause a critical hit with each successful attack. Critical hits cause extra damage.

Reload: Guns have a limited ammount of ammunition and they need to be reloaded in order to keep shooting. To do so you will need to have a spare magazine on your unit inventroy and spend Action Points during your turn.

Skills: Each Class has its own set of Skills that can be unlocked by reaching a certain level. Some Skills are active and the player will be able to use them during their turn by selecting the unit and then pressing on the desired Skill.

Falnking: If a unit is shot from behind, it will be considered as flanked. A flanked unit will not be affected by cover and will have and the attacking unit will have a boost to accuarcy.

You can spend one quarter of a character’s Action Points to perform any amount of rearrangement of equipment items. If you don’t have enough Action Points, you can still view your inventory, or the contents of a crate.

There are three zones in the inventory screen:

You can also give an item to an adjacent character by dragging it onto that character’s icon on the right side of the inventory screen.

Each bullet has a damage rating which represents the amount of Hit Points removed from a target if it hits. Each bullet subtracts the armour rating of the target body part before applying the damage to the target. Some weapons fire a burst of shots, with each bullet doing damage independently.

In the free aiming mode, you can select different body parts of a target, or any item of equipment carried, and an information box will be displayed. This shows the following information:

Armour​: Each body part has a separate armour rating. Equipment items also have an armour rating. Flashing armour pips indicate the likelihood that the armour would be removed due to the armour shredding ability of the weapon.

Disable effects​: What will happen if the body part Hit Points are reduced to zero. Damage, Wounding and Death.