Unlocked: Complete all three “Murder Scene” chance encounters – This stranger mission is available between 10pm and 5am only. After having assembled the map by completing the Murder Scene encounters, you can open the basement door shown in the picture at Lucky’s Cabin, located southwest of Valentine.

You will find some collectibles and a knife to inspect. After the cutscene, stun your assailant and knock him out. Tie him and take him to the waypoint in Valentine.

When the murderer assaults the sheriff, activate Dead Eye and shoot the criminal. Collect your bill fold reward if you succeed in killing the murderer. If you don’t you will not get any reward even though the sheriff will live.

The crime scene with the “LOOK ON MY WORKS” graffiti and a treasure map stuffed in a decapitated head is the first time many players will encounter the clues to the mission, American Dreams, a Strangers Side Quest about a serial killer in Red Dead Redemption 2. This page contains a map to all murder scenes and a Walkthrough for the American Dreams mission. 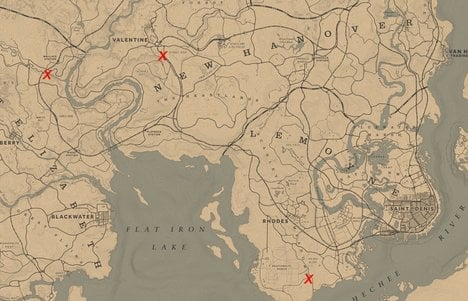 There are three Murder Scenes to find in Red Dead Redemption 2, each with a portion of a map shoved in the decapitated head’s mouth. This is a graphic mission, so be ready to see that going forward.

With three pieces of the map revealed, you can head to the killer’s hidden bunker. First things first, though, you’ll need to visit the first map location. This mystery starts in Valentine.

Ride or walk south of the town, following the train tracks. Once you get close to the corpse you’re looking for, a white flashing marker will appear on your map. If you pause, you’ll see a marker for a corpse. If you for some reason don’t have this pop up on your map, try looking again in the evening. 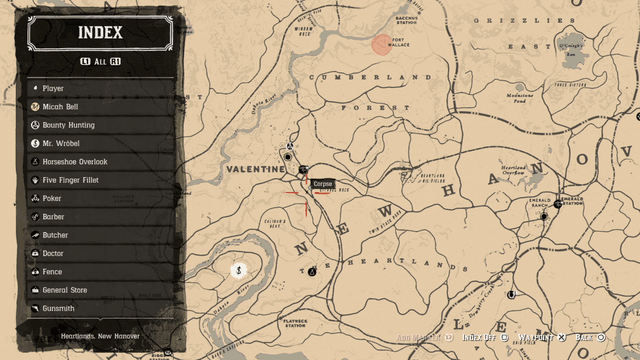 As you approach, spooky music plays and some satiated birds fly off. They’ve had their fill on the hanging torso. If you approach from the north, walk under the train tracks and turn around toward Valentine to take in the full scene. The words “Look On My Works” are scribbled on the rocks next to the bridge. 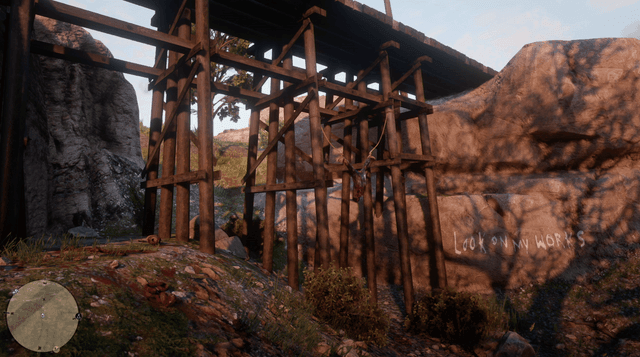 To the west of the hanging corpse is the missing head. Approach it, and you’ll be able to collect the first of three map pieces that’ll lead you to the killer. Now, onto the next location. 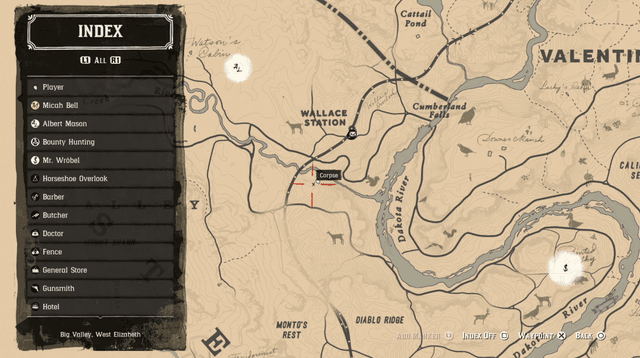 You’ll find this corpse strung up in a similar fashion to the first, though it’s not so high up. The words “Do You See?” are written next to the largest chunk of the body on a boulder. 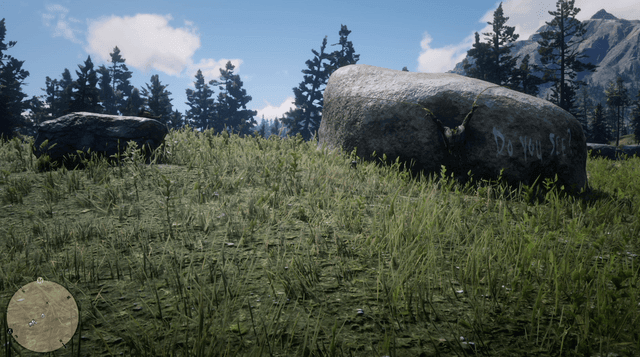 You’ll find the head on the large boulder next to the hanging corpse. Inspect the head to get the next piece of the puzzle. The third and final hanging corpse is a long way from this location.

The third and final corpse can be found in the southern part of Lemoyne. Ride east of Braithwaite Manor to find the scene. It’s even easier to spot in the dark. The scene is illuminated by a single lantern. 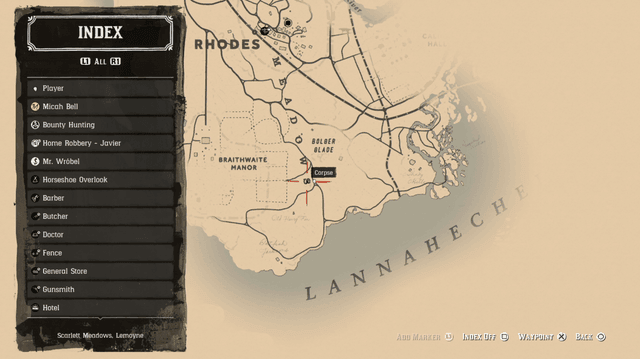 The killer has stopped requesting us to do things, and is now presenting. The word “Behold” is written on the tree to the right of the hanging torso. The succinct message makes for a fitting end to their trail with the third and final piece of the map present in this location. 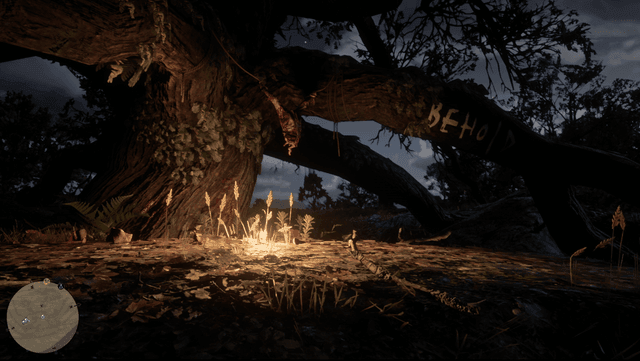 You’ll find the decapitated head on the other side of the tree. Take the final piece of the map to see your vague instructions to find this killer. The back of the map even challenges you to do so. 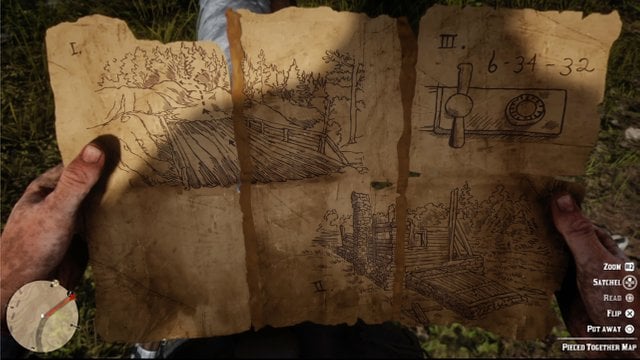 Please scroll down if you’d like the answer to this map outright, but if you want some hint uncovering the mystery of the map instead, scroll slowly.

The killer included very little information about his whereabouts on the map. The first point, the bridge, indicates that you’ll need to leave the location where you found the third corpse. 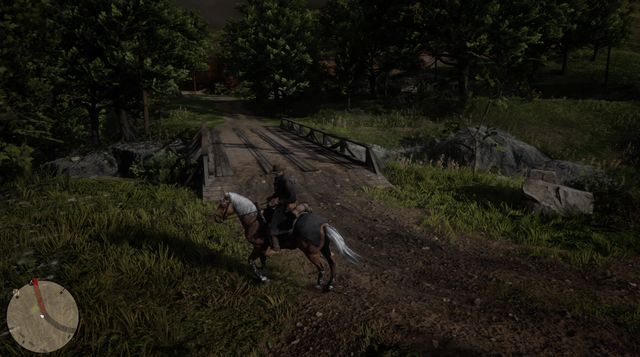 There are many bridges in the Lemoyne area that look similar to the one on the map, but the one we found that matches the drawn version most is in the Dewberry Creek area.

You can see it here on the map: 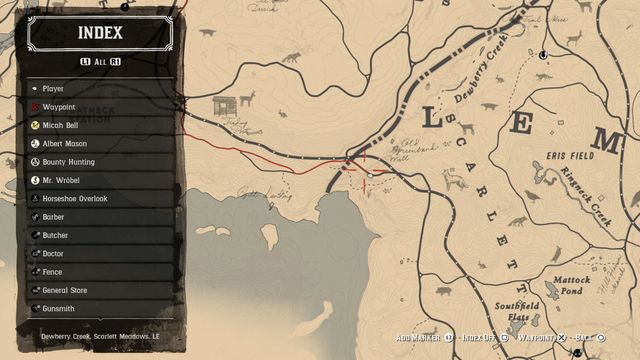 This suggests that the ruined cabin you need to find is not in Lemoyne. Instead, it seems to be in New Hanover. There are only a few abandoned shacks in New Hanover, but one in particular comes to mind.

Ride toward Valentine. Now that you have the map finished, RDR2 will do you a favor and highlight the area in a Stranger circle. 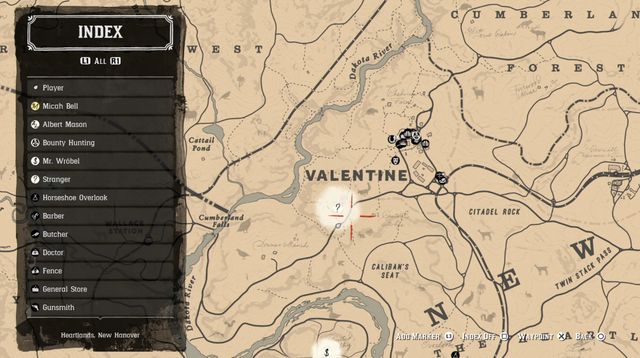 There’s only one building that fits the drawing here: Lucky’s Cabin. Ride out to the cabin that’s just off the trail.

Once you arrive, your horse may be scared away. There are lots of snakes slithering around the cabin, so don’t be surprised. Instead, approach the cellar door. Arthur will remember the code on the map so you don’t have to. Enter the spooky cellar. When inside, be sure to inspect everything and take what you want. Once you leave, you cannot return.

Inspecting the knife sticking out of a corpse in the back of the cabin triggers the next event: Arthur’s encounter with the killer. During this event, you cannot shoot the serial killer or you will fail the mission. Instead, watch for the button prompt to surprise Arthur’s attacker then knock him out in a fist fight.

With the murderer down, you can hogtie him and load him on the back of your horse. Ride into Valentine and deliver him to the sheriff. 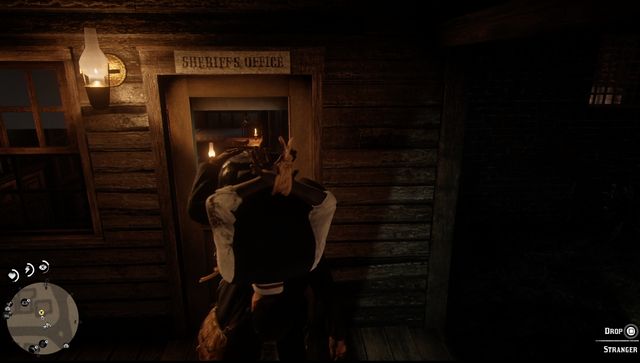 When prompted, place the man in front of the sheriff’s desk. Arthur will explain all he knows about the killer to the sheriff. As the sheriff takes the man to his cell, the man whips around in a frenzy and, while barking some strange noise, attacks the sheriff. Whip out your pistol and use Dead Eye to kill the insane man attacking the sheriff. If you’re too slow, the sheriff will take care of the issue himself. You will not be rewarded if that happens.

With the madman dead, the sheriff will thank you for your help and awards Arthur $20. Case closed.