On this page of our Red Dead Redemption 2 guide you will find a walkthrough for Our Best Selves. As part of their last heist, the gang sets off to Saint Denis to attack a train with army wages and military supplies, which is heading towards the destroyed Bacchus Bridge.

Note: Before starting the mission, you should complete the side missions The Course of True Love and Do not Seek Absolution as they will be inaccessible later! 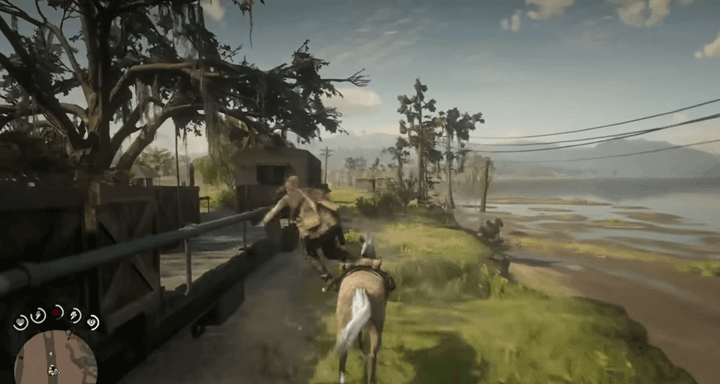 How to get the gold medal in Our Best Selves? 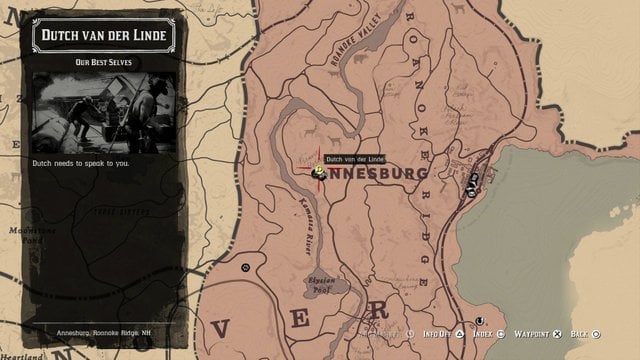 To start Our Best Selves, approach Dutch at the camp. Dutch says, again, there’s one more job to do… there’s always another job. This time, he wants to rob a train, supposedly full of Uncle Sam’s money.

Arthur insists Dutch let the women, children, John and his family, are let to leave. 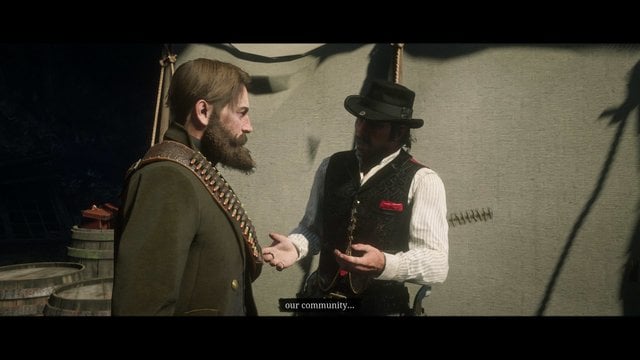 He’s says he’ll see to it, but Dutch doesn’t take kindly to that, repeating it as if it’s a mantra to himself as they leave to go rob that train.

After riding some ways, take off with John to go collect the dynamite. When you arrive, get off your horse and go to the back of the wagon. Press triangle/x to pick up the dynamite, then return to your horse. 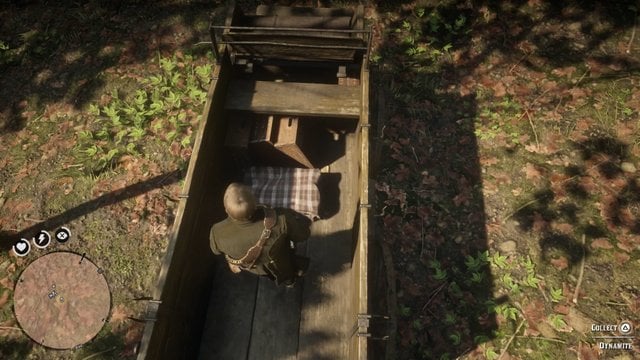 On the way to Dutch with the dynamite, John tells you Abigail found Dutch’s stash of money nearby Beaver Hollow, the camp. Arthur tells John he’ll do anything he can to get them to safety.

When you meet up with Dutch, he and Micah will speak with some hostility to you and John on the way to the train through Saint Denis. Follow them through town. 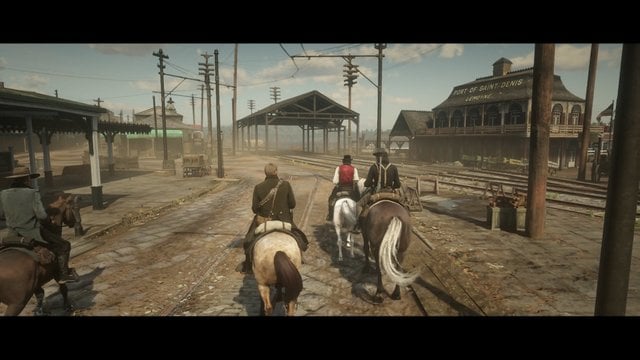 When you get to the tracks, Dutch doles out the instructions. Arthur is supposed to get on in the back.. but, the train never stops. Get on the horse, and ride after it.

When you get close enough, press square/y to jump onto the train. Men almost immediately start shooting when you do so. 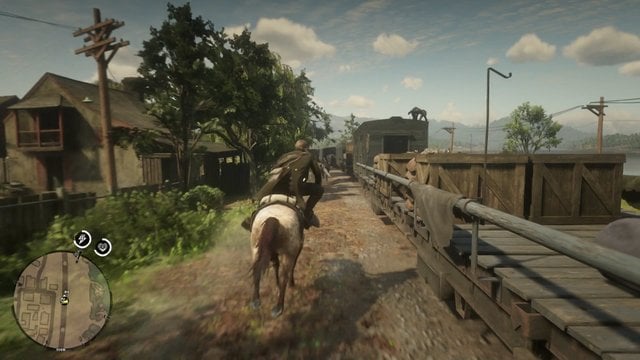 Keep following John through the train. When you reach a wall, press square,y to climb up. You’ll encounter more gaps as you run across the train – press square/y to jump across the gaps. 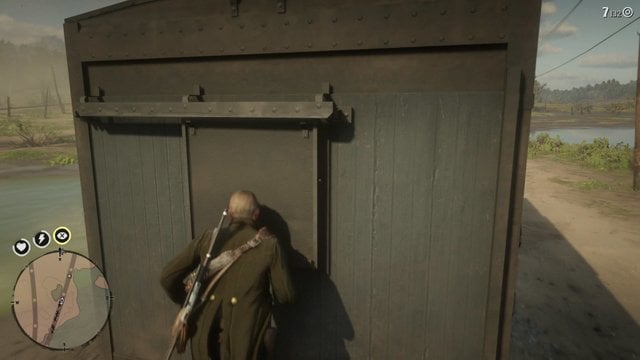 John and Arthur will share some words while killing their way onward. When you reach the end, a shot you send off will start a fire. You can’t proceed.

Dutch and the boys will appear by the side of the train. Jump on with square to bypass the smoke, and jump back onto the train on the other side. 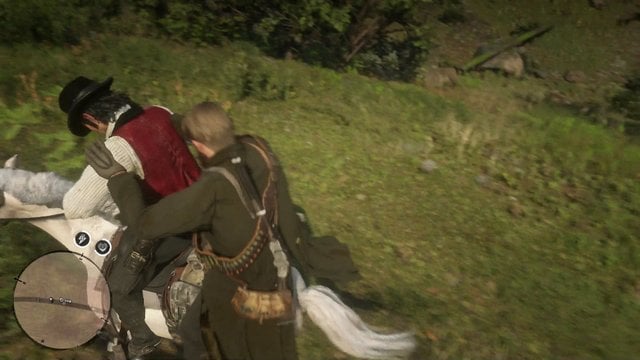 When you do so, a man on land will yell to alert others that the train is being robbed. Arthur gets the gattling gun ready, and .John moves to disconnect the train carts that are on fire.

When he does, he gets shot – and falls off the train. Immediately after, a man appears behind you, on top of the train car. 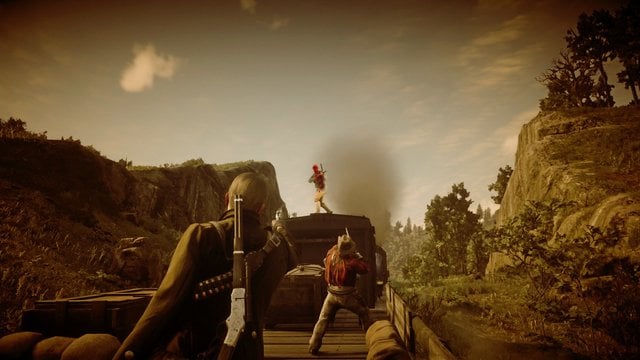 After killing that man, Dutch says he’ll go back to get John, and instructs you to protect the money. You get on the Maxim gun and tell everyone to not stop the train no matter what.

Sadie and Bill will tell you which way enemies are coming from, but you can also keep an eye on your mini map.

Exit the gun with triangle/x when you’re told to. Then, climb up ahead, and run further. Place the dynamite on the steel wall near Sadie. 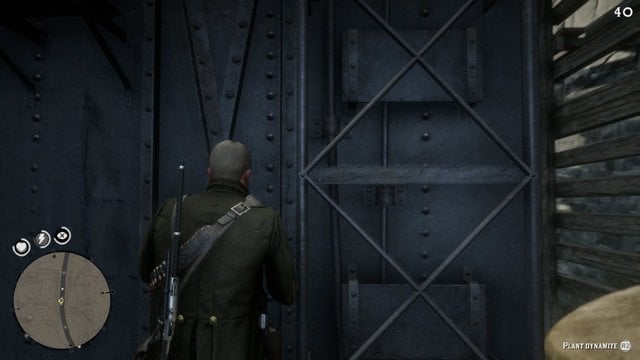 Now enter the armored car to search for the money. There’s plenty of it. Arthur will start handing them to the gang. Once it’s emptied, Arthur leaves the cart.

Now, jump off with everyone with square. You made it just in time. The train goes careening off the the bridge that you an John blew up earlier. 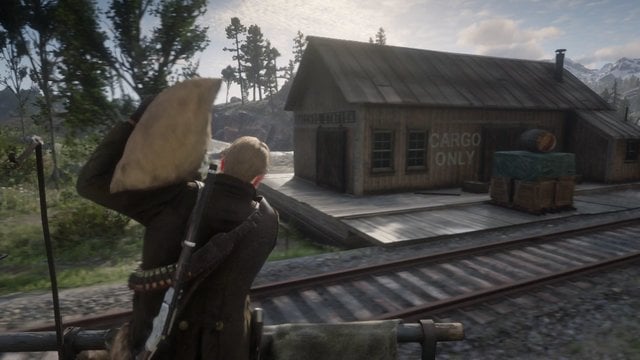 Dutch, Micah and the rest meet back up with you with some bad news… They say John didn’t make it. Somberly, you pack up your horse and ride off with them.

That’s the end of Our Best Selves.