theHunter: Call of the Wild – How to Unlock the 44. Panther Magnum

The purpose of this guide is to tell you how to get rid of the 357 as fast as humanly possible.

Other theHunter: Call of the Wild Guides:

If you’ve played theHunter CotW long enough the name Focoso 357 should evoke a shudder and possibly mild vomiting. Truth is the starter handgun can’t take anything down, and grinding for the 44. Panther Magnum is hard, boring, and makes the user suicidal. That’s why I made this guide after I stumbled upon one of the fastest way to get rid of the 357 and move onto a real gun.

The secret to success

Now as you probably know the 357 is completely useless against almost all the deer in the game. I have endured many long hours of following endless blood trails from flesh wounds made by my pathetic handgun. So I turned to the one place I knew could help me, Google. I watched a video on how to get the 44., and the fellow recommended Roe deer hunting. So, in hopes of finding a weaker deer, I set off to the Hirschfelden reserve. After a few attempts and lost deer I gave up and looked for something else, that’s when I literally ran right into the secret. The key to unlocking the handgun holy grail. The Fallow deer.

I walked into a large herd of Fallow deer as shown above, and decided to take a shot at one. I aimed for the neck, and, to my surprise, dropped the deer immediately. I harvested the kill, gaining over 900 dollars and 51 handgun score, and it was a doe! Surely, I thought to myself, they can’t be this easy to hunt. I was so wrong.

I trailed the herd, which had only gone about 75 yards, and shot a doe at the rear of the group, the other deer didn’t even blink an eye. I took out another one before the herd ran away, 3 deer in one go, again with over 900 dollars and about 50 score each. By this point I was practically jumping out of my chair, I’D FOUND IT! No more would I trail wounded white tail for thousands of miles, soon I would have the 44. Magnum.

I trailed this herd for about 10 minutes, and, in the same manner as before, killed every one of them but two. I then realized the fun was over as the herd was gone, then under 30 seconds later I walked over a hill into another herd! I repeated my previous actions, and, at the end of only a half an hour, racked up over 20 kills.

If you’re doing the math here you’ve already discovered how much loot that is, for those of you who dropped out of middle school, let me explain. 20 deer at the rate of 50 score and 900 dollars comes out to over 1,000 handgun score and about 18,000 dollars, in under 30 minutes! I went from about 370 score in over 70 hours of game play to 1,400 in under 30 minutes. Successfully unlocking the Panther 44. Magnum, and gaining almost the 24,000 that it costs.

How to find the Fallow Deer

First, you need to find a herd ripe for the slaughter. There are other guides that show other locations of the animals that I highly recommend, but for here Ill use my own findings. Bellow I have the ring that I found the two herds that got me the 44. There are other places to find them (shown in the aforementioned guides.) but this is where I did. 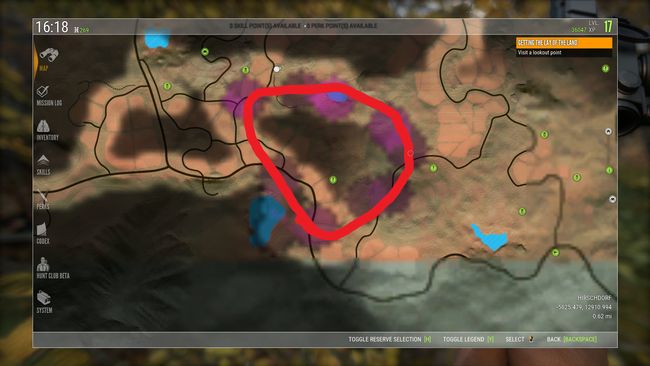 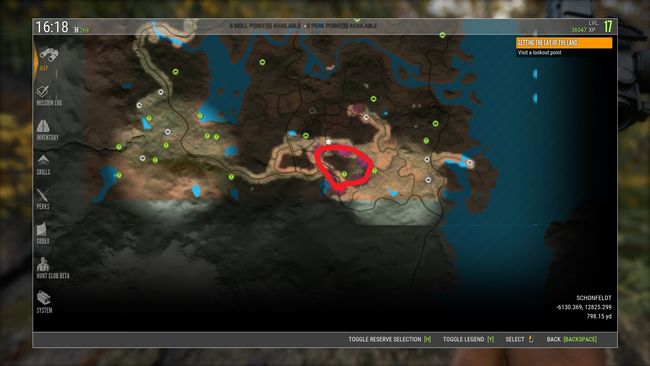 How to stalk the Fallow Deer

Now before you go off and hunt the Fallow Deer to extinction for the purpose of gaining the gun of your dreams, there’s some things you need to know. First I’m going to tell you how to get in close for the perfect shot. Fallow deer tend to roam in the fields and wooded areas surrounding. In the forest they don’t usually detect you, so you need to keep a sharp look out so as to not get trampled by accidently spooking one of them. Once they are out in a field you really can’t sneak in on them, so try to stay in the bushes and only go into the field if there’s no way you can make a shot from the brush. While the safety of the forest you can get pretty close, only get as close as you need to make a safe shot(I’ve found the raptor handgun sight is helpful for this).You need to keep in mind the Fallow deer’s strengths and weaknesses. Most importantly the Fallow Deer has very good eyesight. They are active during dawn and dusk, and prefer open areas and moderately wooded ones. All this information is found in the Codex in the “menu” screen (when you push esc). I’ve included a screen shot so you can see all the info. 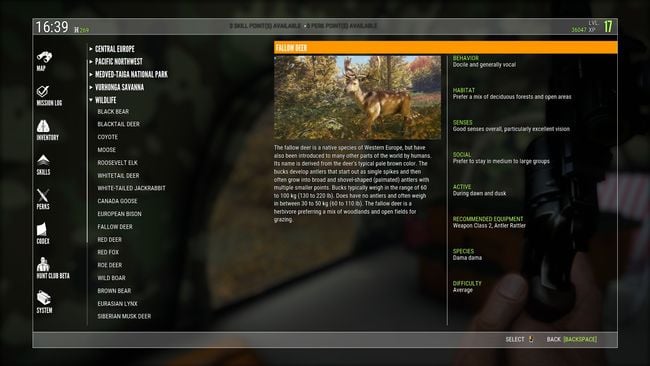 How to kill the Fallow Deer

Now that you know how to sneak up on the Fallow deer, you need to know how to take one down. The guns in theHunter CotW have different ammo types, where you can hit for a good kill depends on the type of ammo you’re using. The first one you get automatically is the Jacketed Hollow-Point, this bullet doesn’t have very much penetration so you can’t get good body shots, you’re going to have to aim for the neck. The second ammo type is the Flat Nose Hard-Cast, this bullet has much more penetration and you can aim pretty much anywhere. I’ve included a diagram of where to hit them. If you can excuse the horrible drawings on the grounds of “I suck at Paint”, You’ll see a few different colors. Red marks where you want to aim with the Jacketed Hollow-Point bullets, blue marks where you can aim with the Flat Nose Hard-Cast bullets. (obviously you can aim at the red with the Flat Nose Hard-Cast as well) Yellow shows the best places to hit them, where as Green shows the less effective(but will still kill) places to aim. There is a diagram of the deer to show where to hit, and one of its skeleton to show what your hitting. The one on the right shows where I hit the deer, killing it within a few seconds. (I did shoot it with the Flat Nose Hard-Cast bullets but you can use both) 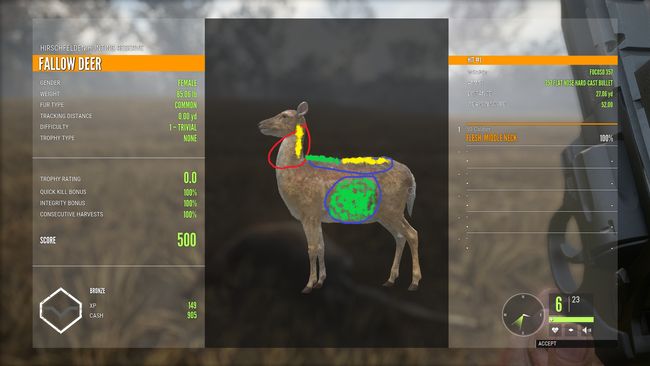 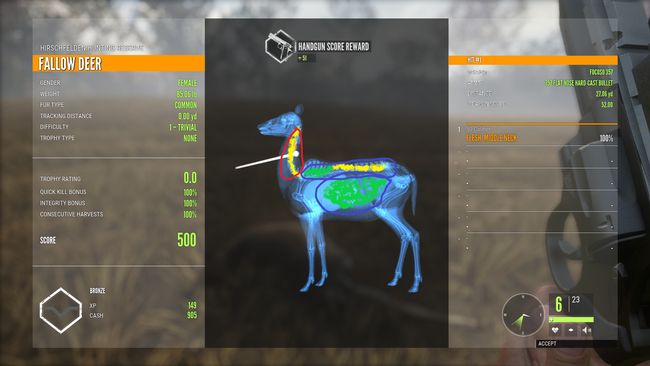 Once you’ve unlocked the Flat Nose Hard-Cast bullets you can shoot them in the chest and spine(as shown below), but the neck is still one of the fastest ways. 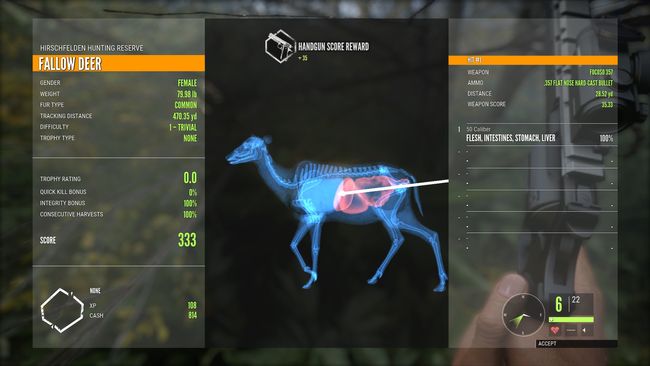 Well now you know one of the fastest ways to unlock the 44. Panther Magnum. I hope you’ve found this guide helpful.