Well we’ve learned the name of the mysterious Trapper. But now we need to get a weapon that will actually kill the Old Bear. Personally, I’m not sure how much more useful a spear is compared to bullets going in at high speed, but that’s story progression for you.

When you’re ready, head on out. It should take you full day to reach the hunting lodge so head out with full energy in the morning. As before, there’s no risk of running into the Old Bear except in pre-rendered cutscenes (although regular bears are still roaming about). The map will show you that you need to go down the railroad again, this time in the opposite direction.

You’ll leave Mystery Lake via the rail tunnel and enter a brand-new region: Forlorn Muskeg. Like Jeremiah said, just keep following the railroad. Forlorn Muskeg is full of thin ice, so you risk a dunking in icy water if you leave the railroad. If you get a “thin ice” warning, quickly back up the way you came to avoid falling through.

Once you reach the other side of Forlorn Muskeg, you’ll leave that region and enter the Broken Railroad region. At this point, you can check your map and see the Hunting Lodge labeled with an exclamation mark. Keep following the railroad until you run into a landslide, which makes things a little more difficult. 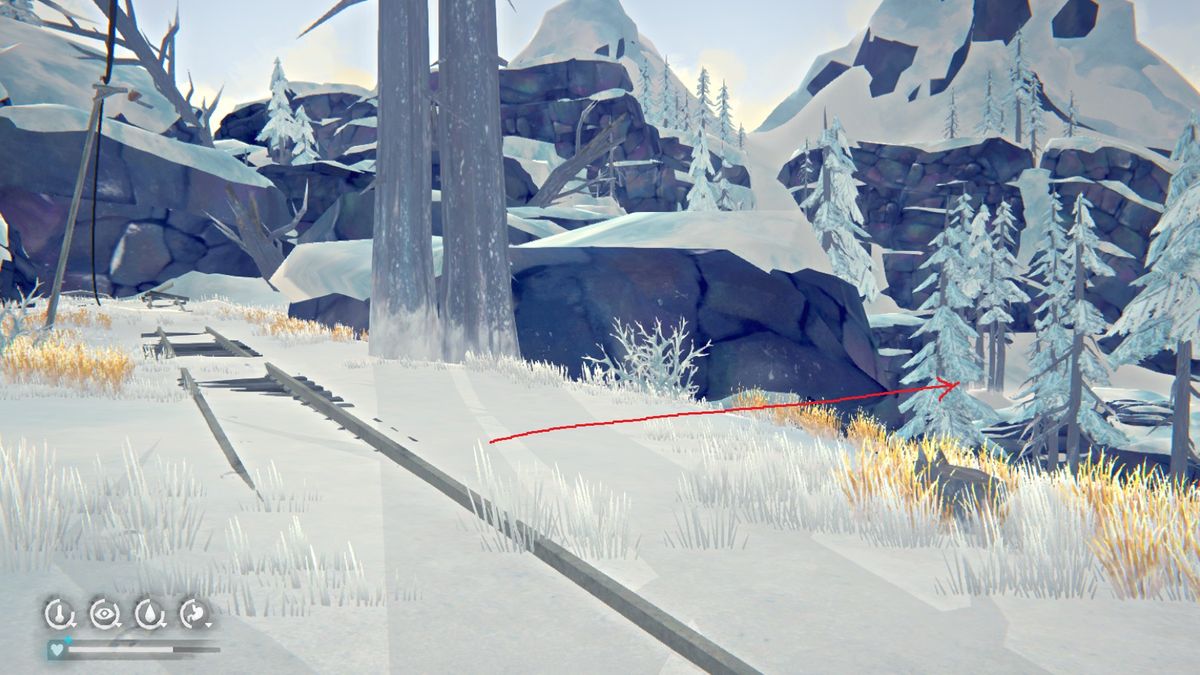 Follow the arrow to the right and you’ll come across a frozen lake. you want to cross the fallen tree up onto the ledge. You can then follow the path to bypass the landslide. 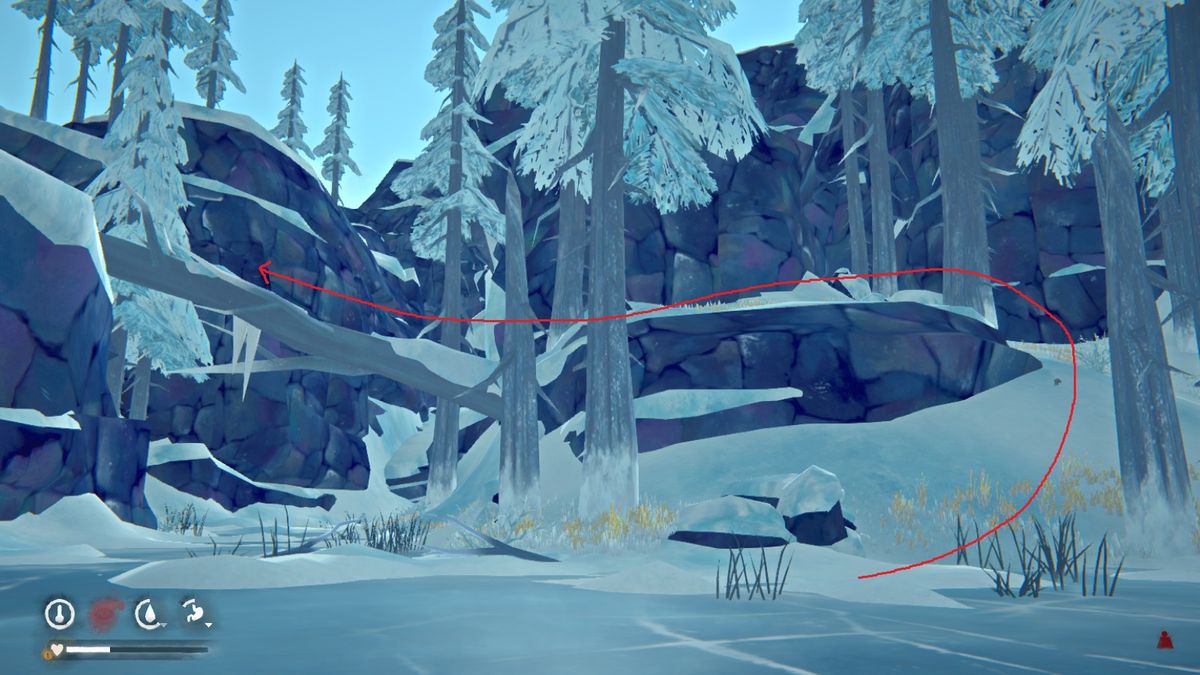 Once you find the railroad again, just keep following it until you see what looks like a broken train car. Right past it is this yellow train car that you can enter via the broken window. 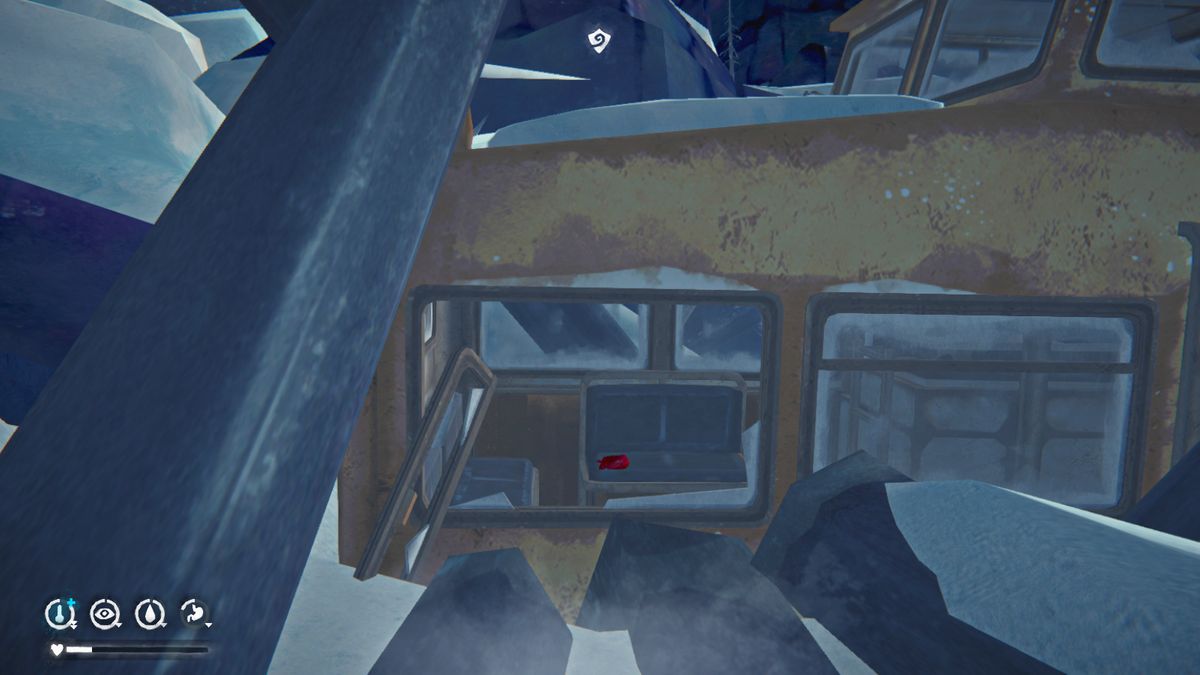 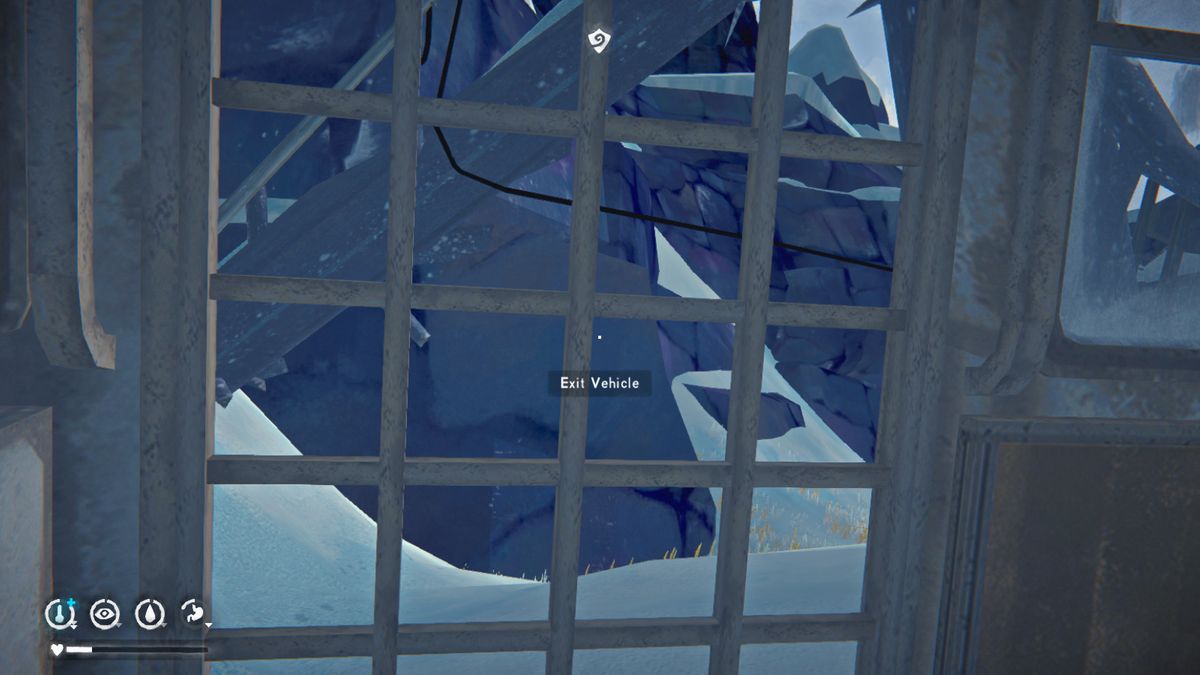 Attempt to exit via the “door” seen in the picture on the right, and the Old Bear will make his second appearance!

Once Will regains consciousness, you’ll want to head for the fire seen below. And it’s Methuselah again! 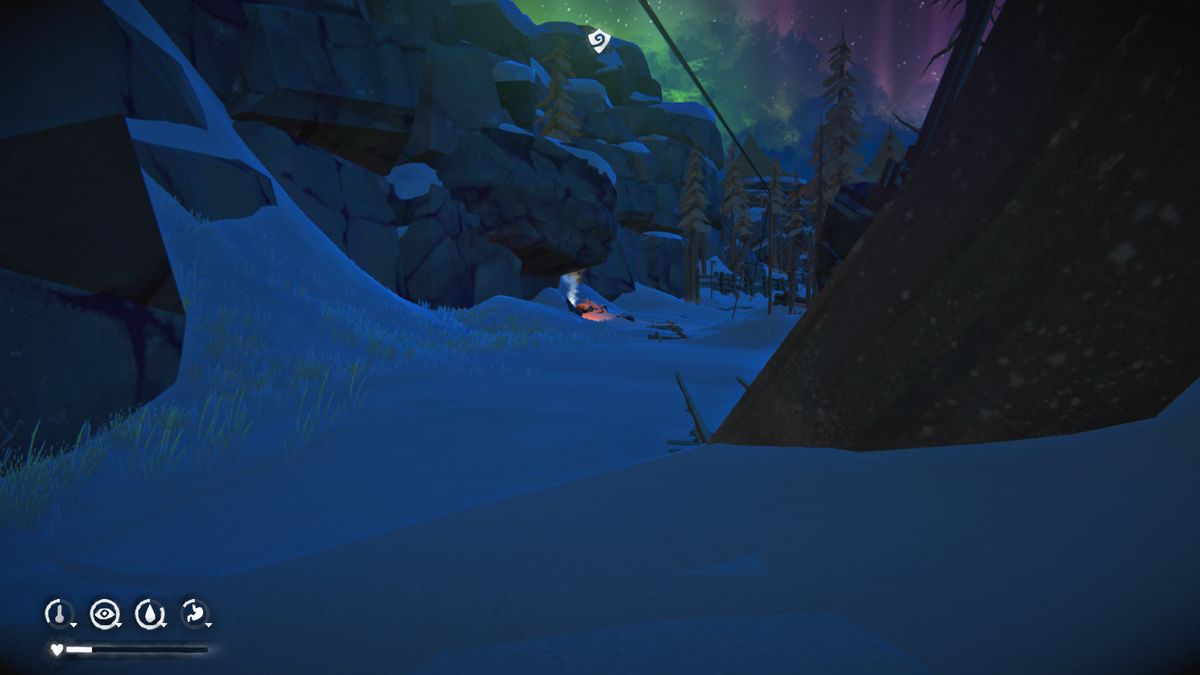 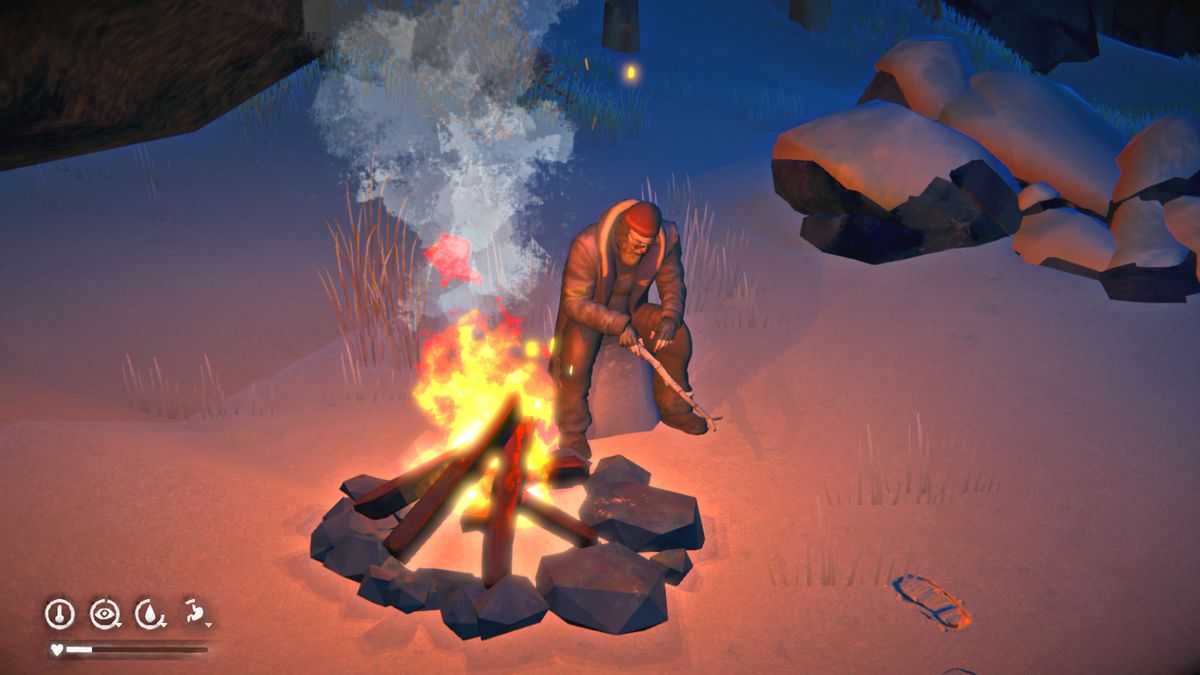 Talk to him for some information on the aurora and wildlife. If you don’t want to talk to him, the info boils down to:

After you finish with Methuselah, turn toward the railroad again and head down the hill. 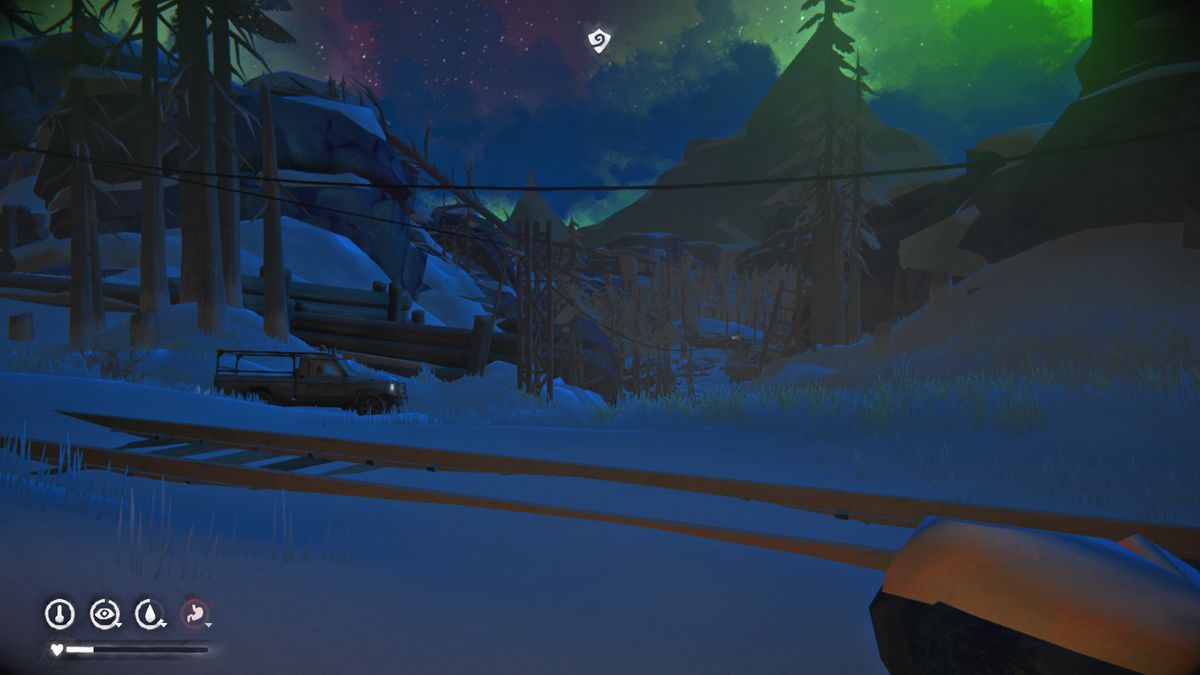 You’ll notice that there are areas of light created by electric equipment, like streetlights and headlights from vehicles. You want to stay in these light areas. Sprint between them, like you’re playing the floor is lava. The reason is: 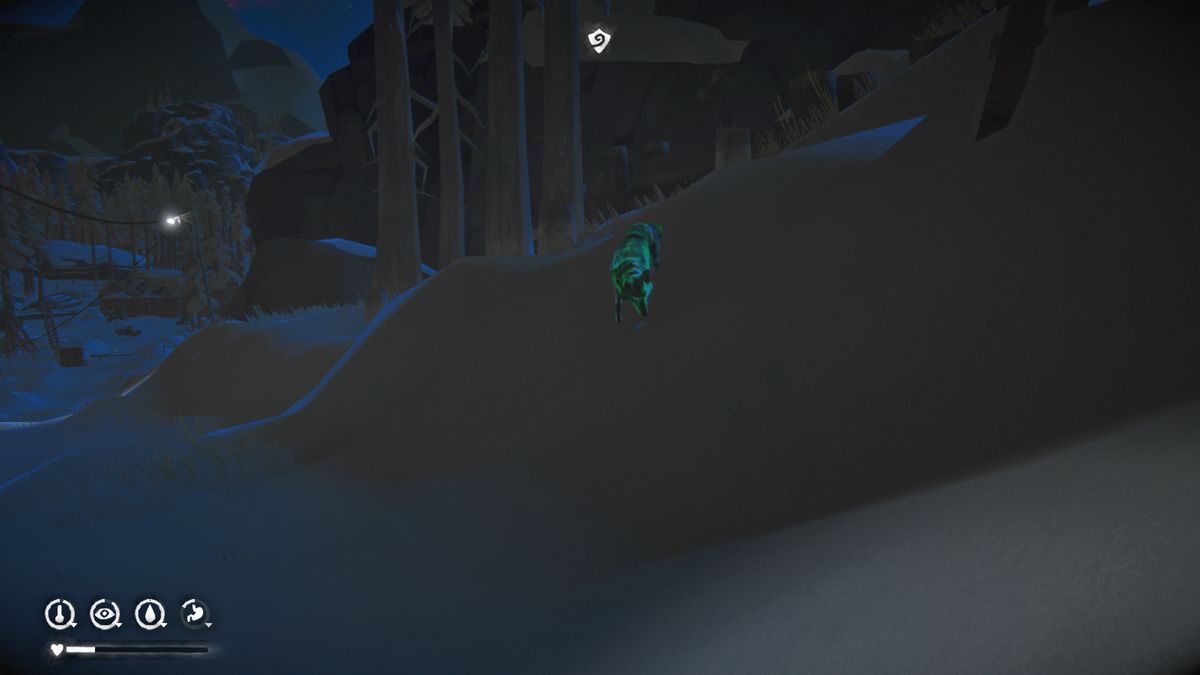 Meet the aurora wolf! Unlike the other wolves, this one won’t be scared away by fire like normal wolves. Instead, you have to use the electric lights. Thankfully, there is a line of streetlights that goes straight to our goal. So just bunny-hop your way across the yard and you’ll eventually come to the Maintenance Yard. Now, you have two options at this point:

I would recommend option 2. It’s a good time to learn more about the aurora with very little risk. If Will dies on the way there, he just respawns at the train car, just before speaking with Methuselah (versus the permadeath of Survival Mode). And frankly, it’s easier to dodge wolves when they’re scared of electrical lights. If you choose option 1, be careful. There are open wires in the building, and they will burn/kill Will if you touch them.

To get to the Hunting Lodge, turn immediately left after leaving the Yard and start making your way behind the building. You’ll eventually come across a frozen lake, and there will be a bridge in the distance. 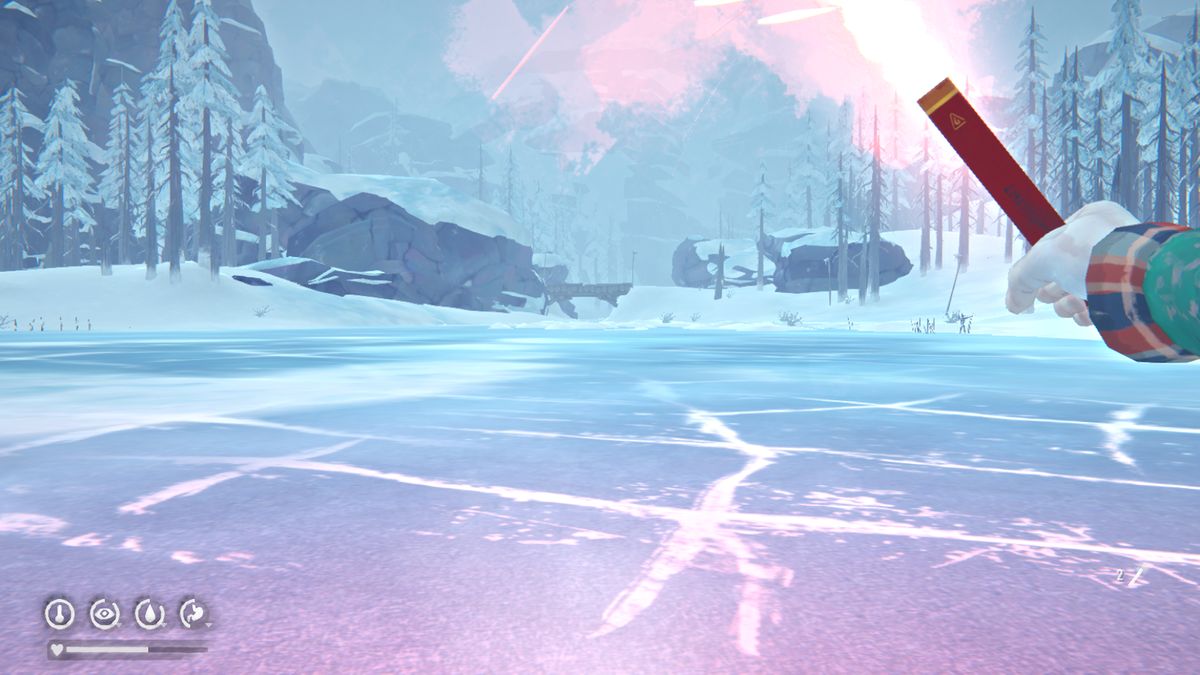 Cross the bridge to reach a metal gate (thankfully it’s unlocked) From there, just follow the path up the hill to reach the Lodge. 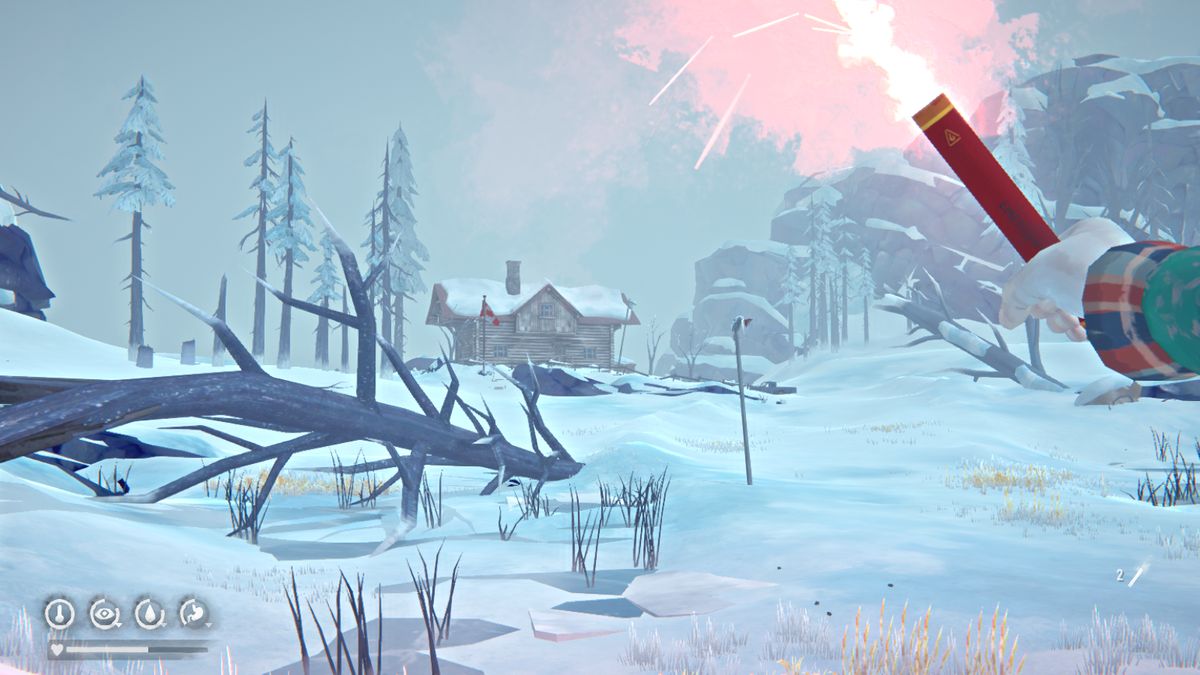 Once you enter the building, turn right to find the Bear Spear hanging above the fireplace. 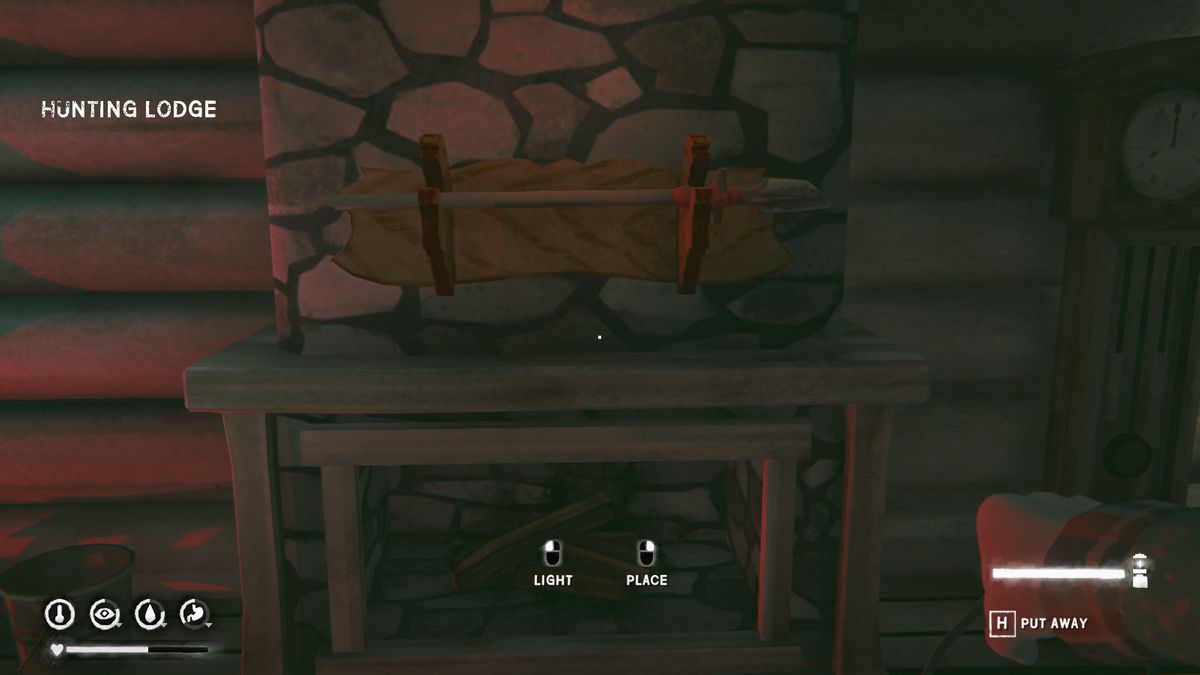 Unfortunately, it has been 150 years. The spear tip is broken, so Will needs to forge a new one at the Maintenance Yard.

But before you leave, explore the Hunting Lodge. There are a few nice items here, including a flashlight (useful during the aurora) and a Forest Talker memo (unlocks the Forest Talker cache side-quest). Plus there’s lots of rifle ammunition, and a rifle cleaning kit, which you should really use. At this point, the gun is probably jamming between every shot.

After heading back to the Maintenance Yard building, go inside to find the forge. 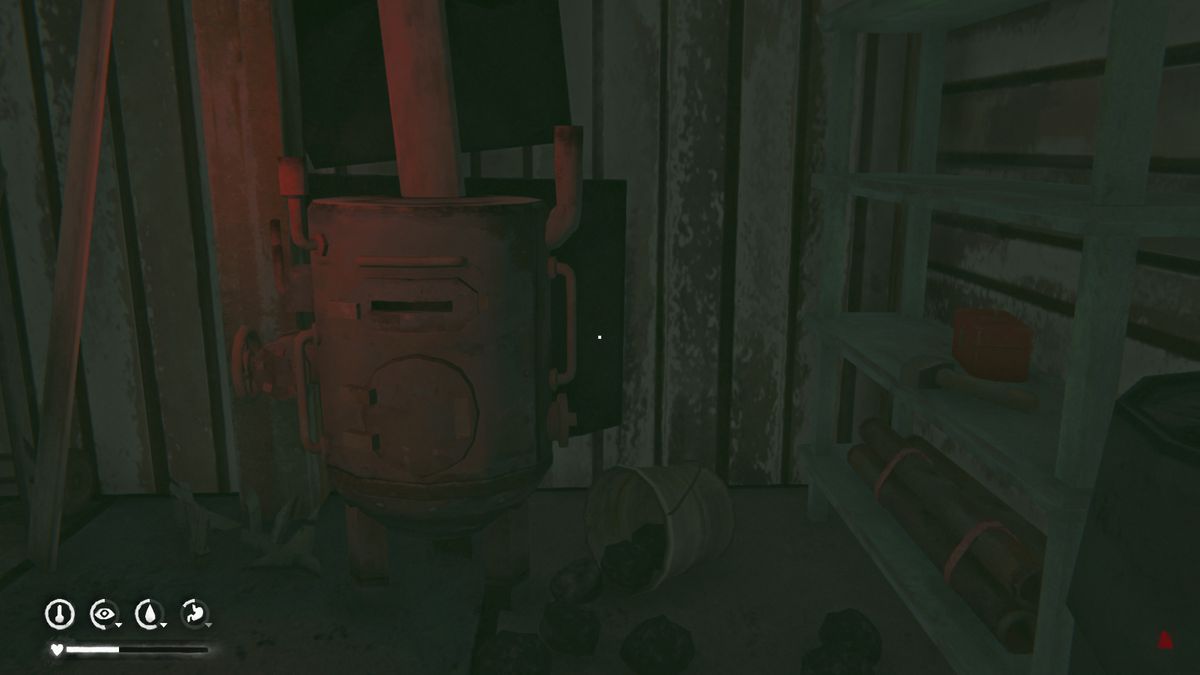 All you need to do is start a fire, and the game will automatically bring it up to the proper temperature. To make the new spear tip, just grab two pieces of scrap metal and the heavy hammer (which is on the shelf, next to the forge). There should be enough scrap metal lying around the building, but you can use the hacksaw outside to cut up metal furniture if you need to. You’ll want to click on the little slit, above the door to start forging items. 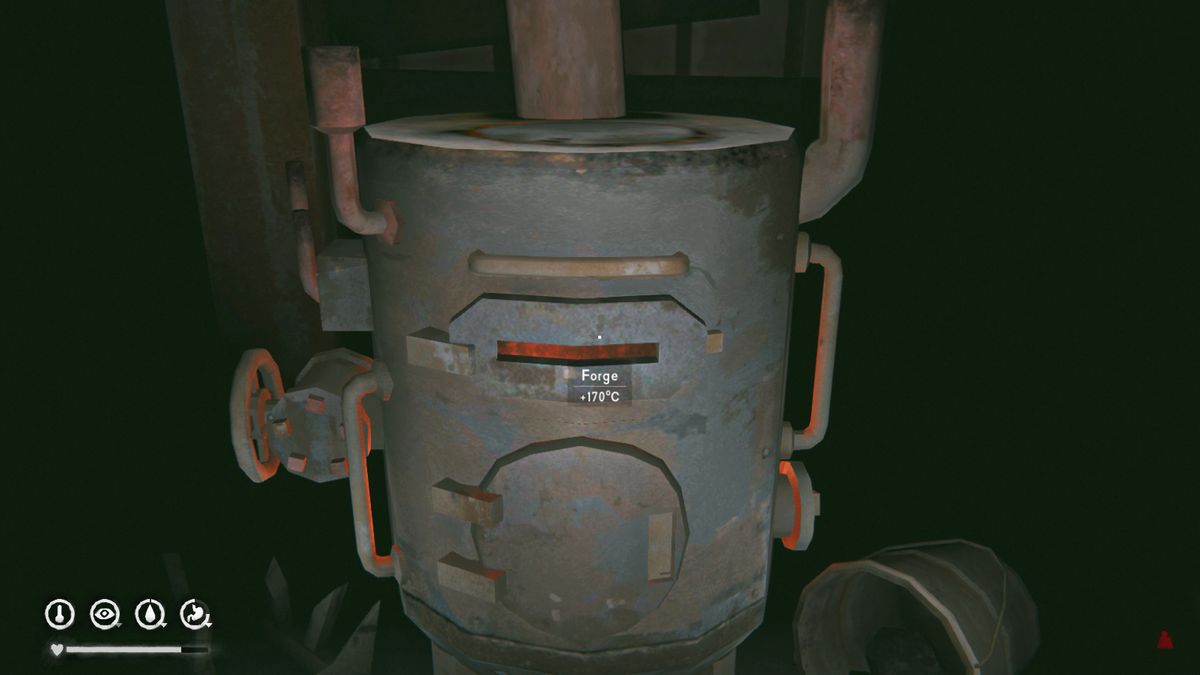 Once that’s done, it’s time to head back to Jeremiah. Just go back the way you came. You can get over the fallen train car via the wood seen below. 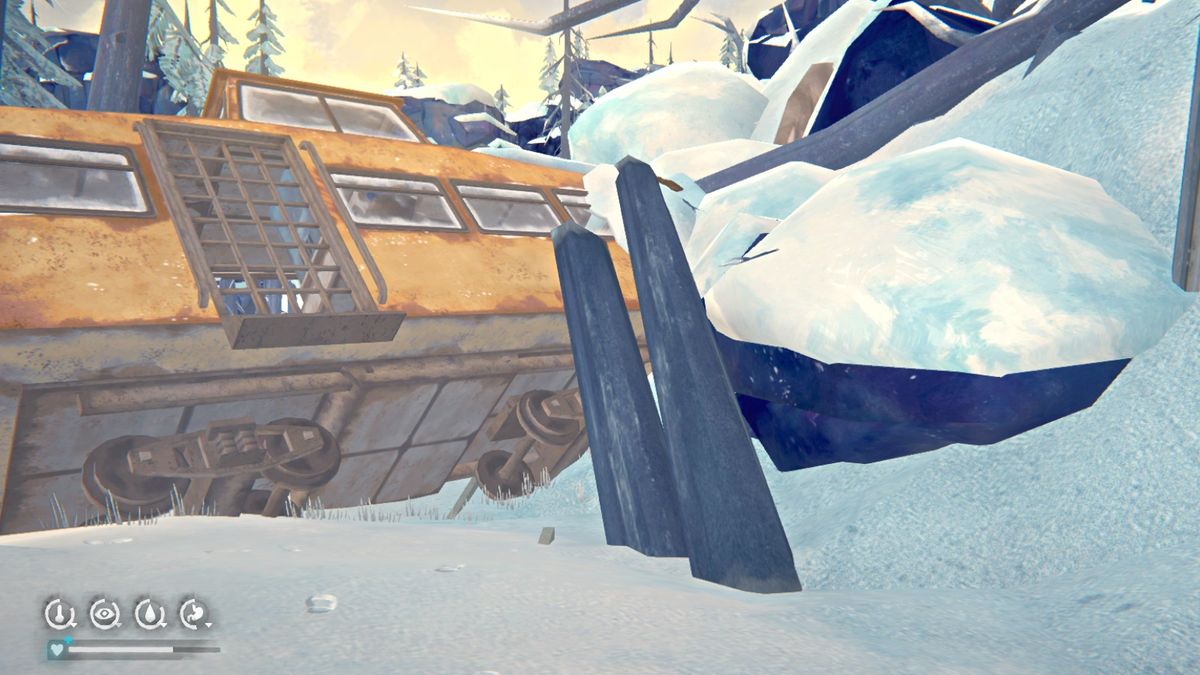 You also can climb over the landside from this direction, so no need to take the side route. Anyways, you’ll have an interesting cutscene with the Old Bear right before Will enters Mystery Lake, and then it’s back to the Trapper’s Cabin for the last conversation of this chapter.