Or how to keep yourself democratically elected and pretend you’re not actually a dictator.

Are you wondering why your popular support is tanking even though all the factions love you? Have you just been playing Tropico 6 for the last couple of hours and can’t figure out the secret to staying elected? Did you just take the easy way out and cancel elections altogether and now get annoyed about constant guerilla fire attacks?

This is the guide for you. It will go over the most important elements that contribute to your popular support level and how to skew them in your favour. Don’t be one of those evil dictators that hate democracy, use democracy to justify you being a dictator!

There are a few elements that determine your popular support, all of which can be seen in the Almanac and by clicking individual citizens. We’ll start by breaking down the elements that lead to approval for one citizen. 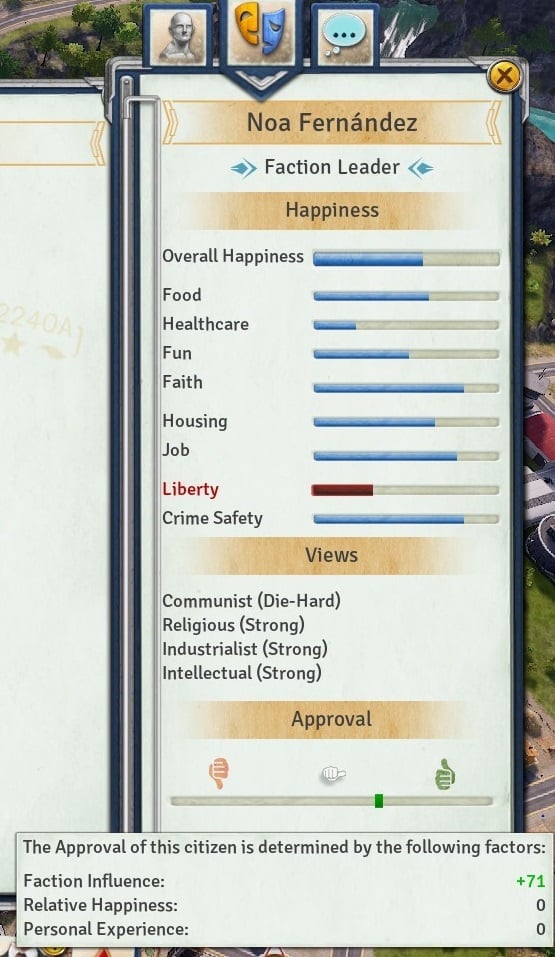 Probably the most important bit, but also the one that most people focus completely on and then don’t realise why their support is in the drain.

In the Almanac under the Politics tab is your overall faction standing description. When you click on a faction button you’ll see a breakdown of all the faction members. It’s important to know that your citizens can be members of multiple factions, and that their overall faction approval bonus or malus is averaged between the (maximum 4) factions they are a member of. I’m not sure if the die-hard/strong/moderate status of support has any effect directly on a citizen’s support (a weight perhaps?), or whether it only dictates how hard is it to convert a citizen to another faction using propaganda.

Ultimately, this one is directly related to the factions you choose to keep happy. More on that later.

The interface must be bugged here because this always shows as +0, but it does actually affect your popular approval heavily. The key to understanding this one is to notice the word “relative” in the description. Relative to what? The answer is: to the rest of the Caribbean.

Example: you are in the modern era and caribbean happiness is maxed out at 80. Being the money focused dictator that you are you put all of your cash into building your industry and neglected public services. Your overall happiness is 60. This means that every citizen of your banana republic is getting a hit of -20 to their personal opinion of you. This unsurprisingly tanks your elections to the point where you are unelectable unless all the factions are absolutely in love with you, which is impossible without spending heavy with the Broker.

This is the bit where people hate you because you denied them their voice. From my experience this exists solely to punish you for denying people elections or committing election fraud, and won’t ever be positive unless you use the Broker’s image campaign.

Things that change this:

One of the more complicated aspects of Tropico 6, but once you learn how to use it it becomes like putty in your hands.

Things that matter to factions

1. What buildings you build
This is either an exercise in common sense, or with steady research of what’s the effect of what building on the political factions, but it boils down to this:

Communists love schools, public transport, Tenements. Despite what the description tells you they dislike Police Stations. They absolutely hate Mansions and Banks, and building a few in a row of these will make them start a general strike ultimatum really quickly.

Religious obviously love it when you build churches. They also like Clinics and Hospitals. They hate army stuff, Rum Distilleries, Night Clubs, Cabarets, and other such degenerate activities.

Environmentalists love their parks. You have a problem with them due to industry expansion? Build parks. Everywhere. They also love Wind Farms, Solar Power Plants, and I think also Plantations. They hate all industry buildings that create pollution, especially oil.

Intellectuals love science. Most of the buildings unlocked in the modern era they will like when you build. Science labs especially. They won’t like Immigration Offices though, since freedom of movement should be absolute and all that. They hate army stuff, churches.

Conservatives love army stuff, churches, Police Stations, and also TV Stations for some reason (I guess Fox News is the reason). Their hate mostly overlaps the Religious, although they also don’t like anything that might seem too progressive.

Note that pretty much all factions hate it when you build bunkhouses starting in the cold war era especially. Stop building them later on.

2. What edicts you declare
This one is a lot simpler because all the edicts descriptions actively warn you what impact the edict will have on politics. Things to remember:

With some experience you’ll be able to know exactly what to do to keep important factions onside before an election, but here’s some strategies:

Try to pick your long term plan in advance. Do you want to focus heavily on industry supported by plantations? The Communist party is going to be your best friend through the game. Do you want to transition towards Banks, Offices, Mansion rents and other means of passive money generation? The Capitalists will love that but the Communists not really. Pick a strategy and stick with it, otherwise you’ll see major political upsets.

Following up from the above: if you want to change your strategy, prepare the ground for it with your media. If the Communists love you and the Capitalists hate you, that doesn’t matter if 80% of people on that political axis are Communists. And vice versa. Use newspapers and especially radio stations to change the membership numbers of each party before you start swinging your economy in another direction.

Use edicts for their political effects as much as for their bonuses. Sometimes doing a quick edict before an election can swing it in your favour.

If your Swiss bank account is fat, use the Broker to buy support with political factions. Don’t do it unless the election is 1 month away, it’s wasted money otherwise because this support decays fairly quickly.

If all else fails, quick build a few buildings that a faction likes just before the election. You can demolish them straight after if you want, but this kind of thing is just a quick, dirty and temporary fix for an otherwise persistent problem and you’ll need to spend some time tweaking your city before the next election is due. Just remember that building stuff that one faction likes almost certainly will annoy another faction.

You can also bribe faction leaders for their support. It helps to squeeze out a percentage point or three. 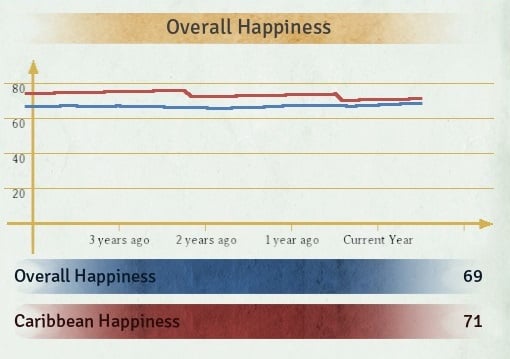 This is the part that tends to cause the most confusion. See the picture on the left: the difference between these two graphs has a direct impact on your personal approval. This swings in both the positive and negative direction, so its entirely possible to have all factions hate your guts while you maintain a 70% approval rating simply because caribbean happiness is 40 and your overall happiness is 60. This is rare and not easy to pull off and you have to actively work towards that to achieve it, but it illustrates a point.

Caribbean happiness is like a clock of doom ticking down. If you’re not fast enough with improving living standards, you will be unsurprisingly hated no matter what the factions think you’re doing right, and much like in Eastern Europe, your citizens too will yearn to experience the green of the grass on the other side.

You manage this in a simple way: keep increasing your happiness. The ways to do that on the overall are too much to cover, as most of it is down to designing your island in an efficient manner where your citizens are in range of everything they might need at any given time, but here’s some quick tips to help you along:

The last section is also the briefest.

As mentioned before, this statistic is mainly for punishing you for failing to allow for elections. The idea is to never be in a situation where you need to deny elections because your support is too low, because this particular stat causes a downward spiral that you will not be able to exit without spending your swiss bank account, because the negative effects on this stat take a long time (usually around 2 terms) to actually properly decay.

One way to mitigate this is to use the Broker. If you built up your banks and your swiss bank account, you can unlock all of his 8 slots and refresh until you find “Image Campaign”. This is a $$7,500 spend that will add a +10 bonus to every citizen’s personal experience. This is one way to offset that one time where you had to cancel elections or rig the vote. It can also help in a tight squeeze during an election where, say, the communists suddenly hate your guts because you stupidly just built 3 mansions right before the vote.

Another way is to use Tax Cuts. Again, only use this right before the vote, but your economy better be able to handle it. If it’s not, you can always use a Wealth Tax right after you win the election to make some of the losses back.